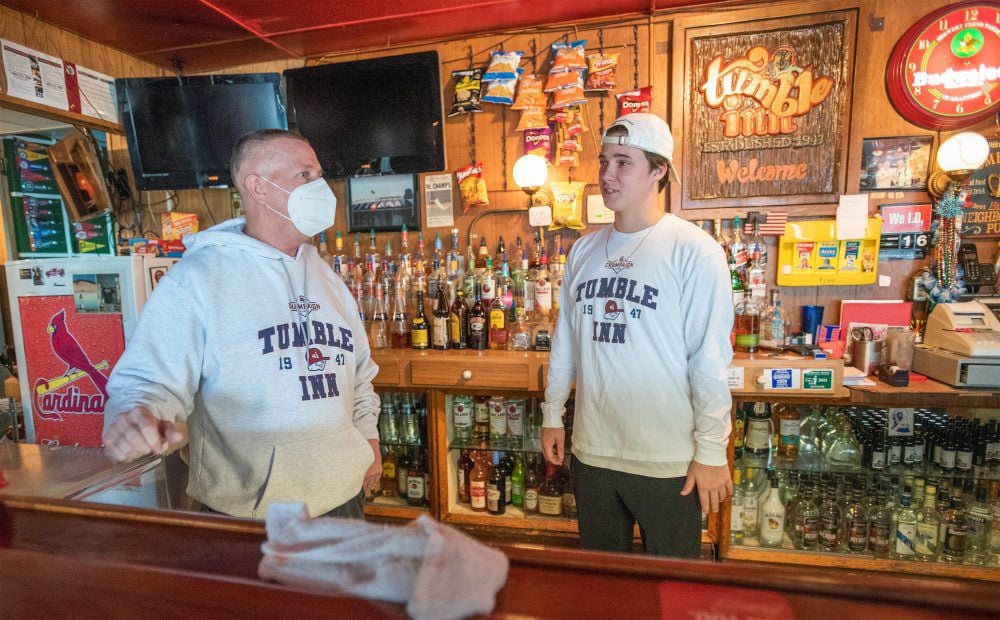 Tumble Inn owner Toby Herges, left, and his son Tobin talk about the possibility of reopening Wednesday, May 20, 2020, while behind the bar at the downtown Champaign institution. 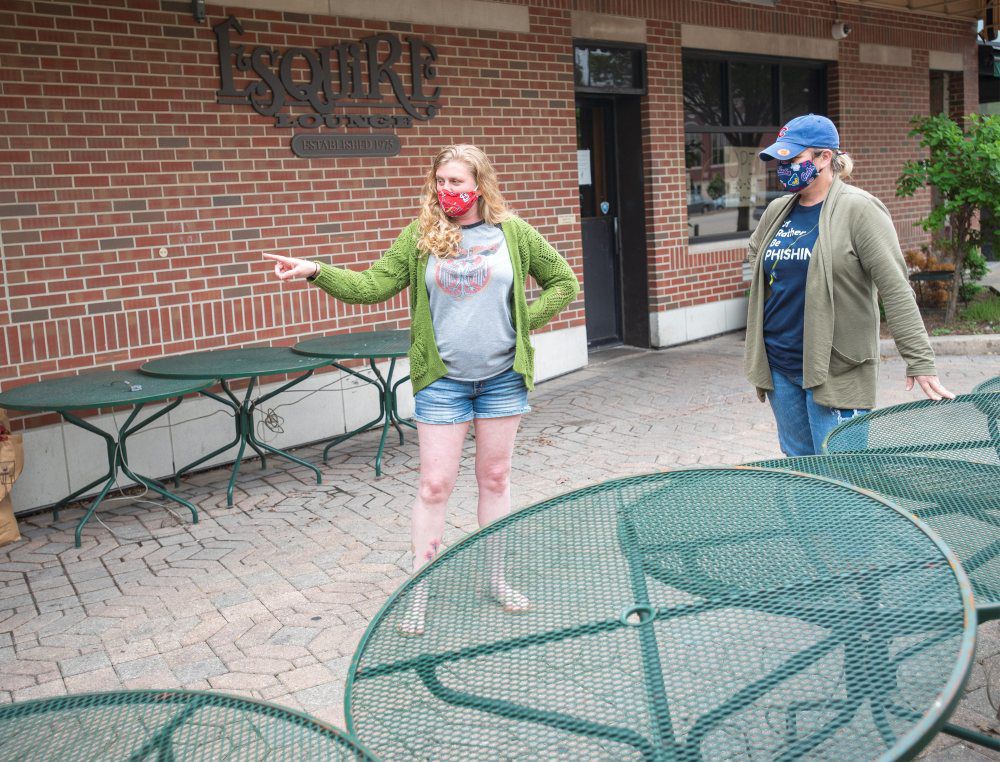 Esquire Lounge co-owner/manager Jackie Sampson, left, and manager Jessica Basalay discuss how to lay out the patio Wednesday, May 20, 2020, at the bar in downtown Champaign so as to fit the requirements outlined in Gov. J.B. Priztker's new order that is set to take effect May 29.

Tumble Inn owner Toby Herges, left, and his son Tobin talk about the possibility of reopening Wednesday, May 20, 2020, while behind the bar at the downtown Champaign institution.

Esquire Lounge co-owner/manager Jackie Sampson, left, and manager Jessica Basalay discuss how to lay out the patio Wednesday, May 20, 2020, at the bar in downtown Champaign so as to fit the requirements outlined in Gov. J.B. Priztker's new order that is set to take effect May 29.

Local officials are looking at ways to expand outdoor seating now that bars and restaurants will be allowed to offer more than takeout and delivery service starting a week from Friday.

That change to the terms of Gov. J.B. Pritzker’s five-phase Restore Illinois plan was announced Wednesday — nine days before all four regions are expected to be cleared to advance to Phase 3.

Until Wednesday, establishments weren’t counting on being able to seat and serve patrons — even outdoors — until Phase 4.

“It gives a glimmer of hope to bars and restaurants and people,” Urbana Mayor Diane Marlin said.

She said the city has been discussing how to expand seating but was waiting on guidelines from the state health department.

“We’re not going to commit to anything, but we’ll certainly work with the bars and restaurants to help get them open,” Marlin said.

Sam Toia, president of the Illinois Restaurant Association, encouraged towns to “show the world how innovative Illinois can be.”

While not shutting down the possibility of opening public streets to dining, Marlin noted that it does raise liability issues.

She said the city will work closely with each business.

“I think every single one is going to be a custom approach,” Marlin said.

With outdoor seating, the state will require tables to be 6 feet apart and away from sidewalks. Staff will have to wear masks and keep their distance.

“In theory, I’m happy. There’s a lot to figure out how we’re going to man it,” said Jackie Sampson, co-owner of the Esquire Lounge in Champaign.

Without sidewalk seating and with tables required to be spaced out, the downtown establishment might only have room on its south patio for four or five tables, she said.

She’d like to see Walnut Street closed to traffic and opened to dining, an option the city is considering.

“We’re exploring an option of closures of parts of streets, not necessarily a full shutdown of streets,” Champaign Planning and Development Director Bruce Knight said on the WDWS NewsHour with Scott Beatty. “One of the things that we hear from our restaurants is that, for the foreseeable future, the curbside pickup program is going to be very, very important to their business model, and so we want to make sure that customers still have access to the curbside pickup locations.”

But, he added, “there are areas where we can either block off parking lanes, or again, partial closures of streets that are low-traffic streets.”

For restaurants with large parking lots, the city is also looking at “reducing by emergency order the parking requirement for restaurants in the rest of town,” Knight said. That would allow for “the option of adding more outdoor seating than they would normally have by using the parking lot.”

City staff had already been working on a plan to expand outdoor seating, Knight said, and Pritzker’s announcement is accelerating that work.

“We’re ready” for business to return, Herges said his bar, which has been closed since March 16, the day before its 73rd anniversary.

Tumble Inn has an outdoor patio, but Herges said he’s not sure how many people will fit with social-distancing requirements. “We’ll have to do some creative furnishing outside.”