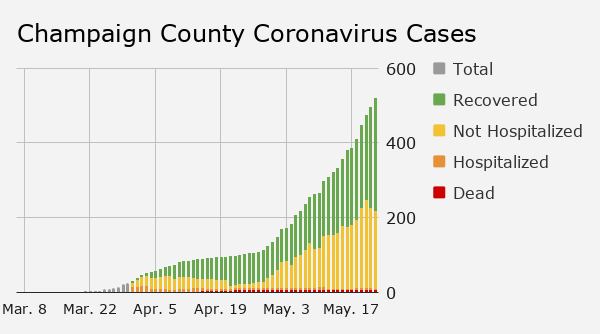 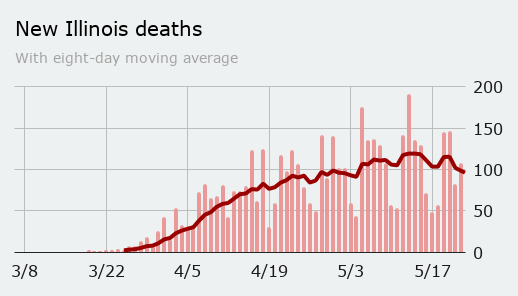 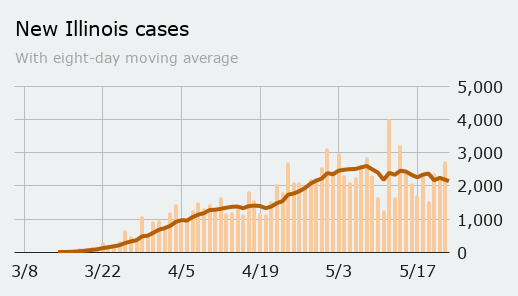 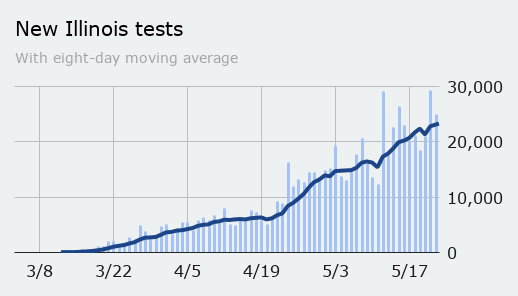 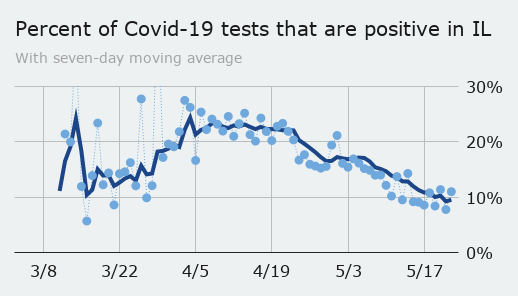 News-Gazette covers: How the crisis has played out on A-1

Have a story to tell? Email news@news-gazette.com

Another 23 cases were confirmed in Champaign County, according to the Champaign-Urbana Public Health District, bringing the total to 520.

Of those, 301 have recovered and three are hospitalized, down from five yesterday.

So far, seven people in Champaign County with COVID-19 have died.

The following zip codes saw an increase in cases from Thursday to Friday:

No new cases in Ford and Douglas counties; 2 more in Piatt

Two more cases have been confirmed in Piatt County, bringing the total to 10.

Another case in Vermilion County

Vermilion County has one more confirmed case of COVID-19 — a resident in their 20s.

Of the 2,092 people in Vermilion County who have been tested, 38 in total have tested positive, or about 2 percent.

Of the 38 cases, one has died, none are currently hospitalized and 25 have been released from isolation.

The city of Champaign is developing a three-pronged plan to help bars and restaurants add outdoor seating, as will now be allowed under Phase 3 of Gov. Pritzker's five-phase re-opening plan.

— Working with establishments that already have outdoor dining, primarily those in downtown, to determine how outdoor seating can comply with the state's new guidelines.

The city said it would work with businesses where outdoor seating can't be accommodated to find alternative solutions.

—The city is planning to create three "Downtown Picnic Parks" on portions of closed streets where customers can eat their carryout orders from local restaurants.

— The city is planning to allow restaurants to use their parking lots for outdoor dining where available.

The city is waiting on additional guidance from the state, but expects to have its outdoor dining plans finalized before central Illinois moves to Phase 3 next Friday.

Gov. J.B. Pritzker announced more changes to Phase 3 of the state's five-phase re-opening plan, which all regions of the state are set to enter next Friday.

He asked childcare centers that aren't already open to prepare to do so in Phase 3.

For the first four weeks, they'll be limited to serving no more than 10 children per classroom.

If no health issues arise during that time, Pritzker said childcare centers will then be able to expand to serving larger groups, although not yet to their full licensed capacity.

"We continue to collaborate with faith leaders to ensure that they can hold services in safe and creative ways that allow for worship while protecting their congregants," Pritzker said.

Another 110 people with COVID-19 have died in Illinois, the state department of public health said Friday.

In total, 4,715 people with the coronavirus have died in Illinois, and 105,444 people have confirmed cases of the disease.

"Until we have a vaccine and reliable treatment, we need to learn how to coexist with COVID," said Dr. Ngozi Ezike, the director of the Illinois Department of Public Health. "The virus is still out there and your individual human behavior — including wearing a mask and keeping six feet of distance — those are the weapons that we have right now to overcome this virus. Let's continue to hang in there."

The new deaths were in the following counties:

With special event permits suspended through Sept. 7, Urbana’s monthly Downtown Get Down summer festival series has been canceled.

The event is typically held the fourth Saturday of the month from May to August. It was launched last year and features live music, a kids zone, inflatables and games.

Its cancellation follows yesterday's news that the annual Urbana Sweetcorn Festival in August would be canceled.

■ Lawmakers could vote on a budget as early as today after working well into the night Thursday at the Capitol and a makeshift House chamber at the Bank of Springfield Center.

A 2,246-page amendment serving as an appropriations bill moved into third reading in the Senate on Thursday evening, meaning Senate President Don Harmon’s House Bill 64 is eligible for full passage today after passing the House on Wednesday.

■ The Illinois House advanced a bill that would greatly expand voting by mail in the November general election, as well as make the day a state holiday this year.

By a 72-43 vote, with three members not voting, the House sent Senate Bill 1863 back to its original chamber. Senate passage is needed to send the bill to Gov. J.B. Pritzker to sign.

■ Four days after surpassing 400 confirmed cases, Champaign County is three away from topping 500 after adding 21 on Thursday.

The encouraging news: Of the now-497 cases, 271 are considered recovered and 219 are active, a significant change from a day earlier, when there were 239 active and 230 recovered.

■ Countywide, there are 22 active “outbreaks,” C-U Public Health District Administrator Julie Pryde said. (An outbreak is defined by state health officials as two or more cases at the same facility).

The health district is seeing clusters of cases linked to employees congregating at work or after work, Pryde said. She urged that workers must maintain social distances in common areas such as break rooms.

■ All local businesses planning to reopen are encouraged to check out champaigncountysafe.org, said Champaign Planning and Development Director Bruce Knight.