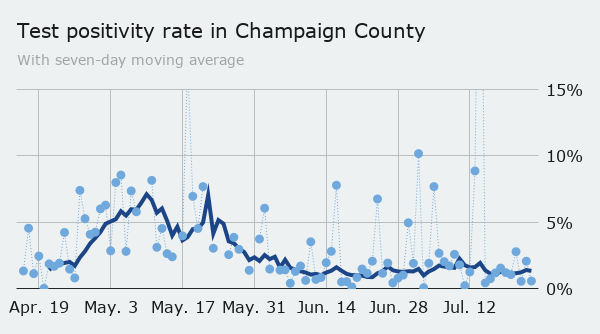 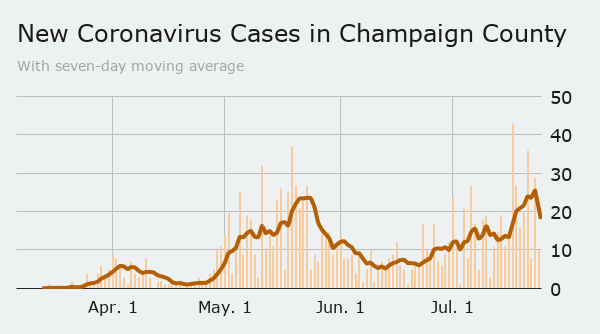 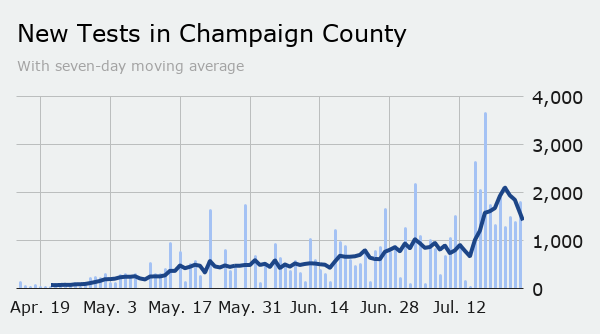 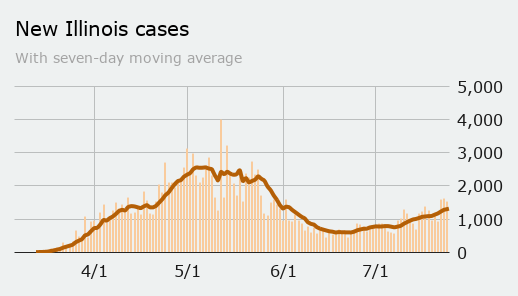 The number of confirmed COVID-19 cases in Champaign County grew by 10 Friday, to 1,280.

Hospitalizations (10) and deaths (17) remained unchanged. Recovered cases (1,074) were up four while active cases (189) increased by six.

Here’s an updated rundown of ZIP codes with active cases, followed by their total number of cases, according to C-U Public Health District data:

Nine more cases were added to a confirmed total that now stands at 141. Of those, 37 are isolating at home and one is hospitalized.

Five of the nine live under the same roofs as others who tested positive Friday — one group of three, another of two.

Of those, 36 are classified as confirmed and 10 probable. (Ford began a new system for categorizing cases earlier this month).

How the 46 cases break down:

But Piatt’s total case count remains 30 after one case was removed. “The individual was without symptoms and received two negative test results,” Remmert said.

No Piatt residents are hospitalized with COVID-19.

The number of confirmed cases in Douglas County remains the same as Wednesday — 91.

The county reported its first coronavirus-related fatality Thursday but added no new cases Thursday or Friday.

The number of confirmed cases statewide topped 1,500 for a third straight day.

Friday's total of 1,532 was down slightly from the two previous days (1,624 Thursday, 1,598 Wednesday) but the state's seven-day positivity rate remained 3.4 percent.

Athletes in multiple IESA sports will not contest their 2020 fall seasons, with organization officials announcing Friday that boys' and girls' golf, baseball, softball and boys' and girls' cross-country will not occur as scheduled.

A post on the IESA website details these changes to the state's 2020-21 junior high athletic calendar, made in response to the ongoing COVID-19 pandemic.

The announcement comes on the same day IHSA officials are slated to be involved in a virtual roundtable with members of the Illinois Department of Public Health and Illinois State Board of Education, intended to give the IHSA direction on conducting its own 2020 fall sports.

An IHSA Board of Directors meeting is scheduled for Wednesday, as well.

The IESA Board of Directors, meanwhile, conducted a special meeting Thursday "to discuss fall sports and whether those activities could be held in accordance with the current limitations placed on schools and activities by the Illinois Department of Public Health," according to the statement on the IESA website.

"After much discussion, the Board unanimously approved to cancel the regular season and IESA state series in the sports of boys and girls golf, boys baseball, girls softball, and boys and girls cross-country for the 2020-21 school year," the statement reads. "There are no plans to try and re-schedule the activities or conduct them later in the school year in part due to if and when high schools in Illinois play their contests.