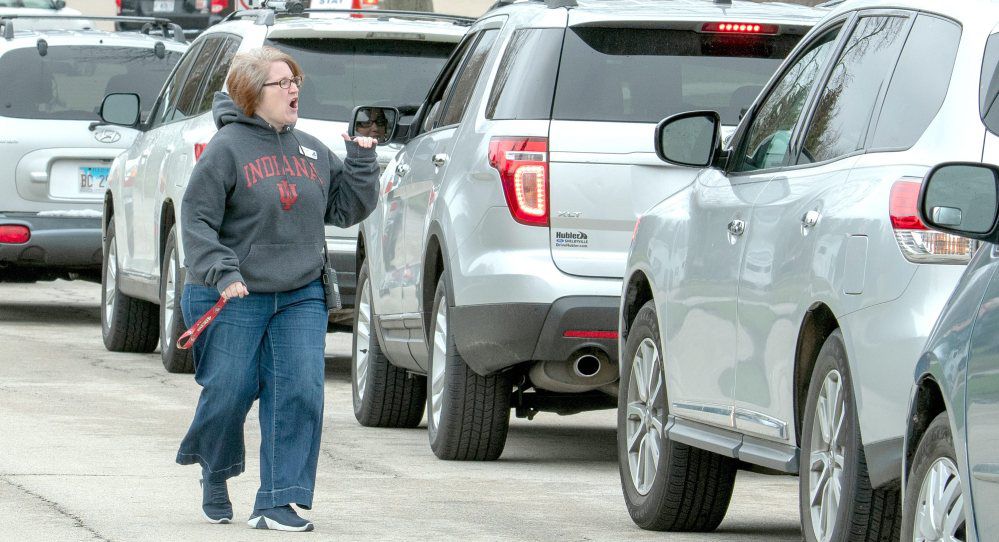 Garden Hills Principal Beth Ladd lets people waiting know that the food delivery is on its way while waiting for free meals for children to be passed out at Garden Hills Elementary in Champaign on Monday, March 23, 2020.

Cars wait in line as free meals for children are passed out at Garden Hills Elementary in Champaign on Monday, March 23, 2020.

Garden Hills Principal Beth Ladd lets people waiting know that the food delivery is on its way while waiting for free meals for children to be passed out at Garden Hills Elementary in Champaign on Monday, March 23, 2020.

Cars wait in line as free meals for children are passed out at Garden Hills Elementary in Champaign on Monday, March 23, 2020.

With churches, restaurants and some food pantries closed, many of the normal avenues for reaching students in need weren’t available for Unit 4 Superintendent Susan Zola as she and her staff tried to get the word out about this week’s meal distribution plan for families who rely on school breakfast and lunch.

So Zola scoured the city for different places where people might see the messages, like laundromats and care facilities such as Frances Nelson, to drop off flyers. Her staff used social media to notify community members.

It worked far better than they expected. Families of 1,470 students collected 10 meals apiece, surpassing their anticipated total of 1,000.

“We were surprised at the response,” Zola said, “but we were grateful for the different messaging systems.”

The district delivered meals to around 700 students, and the rest drove up to Garden Hills Academy, Jefferson Middle School and Booker T. Washington STEM Academy to collect breakfast and lunch for the week. The number of pickups wound up doubling the administration’s expectations.

“If anything, it echoes how much our services are needed, in the school district as well as in the community of Champaign,” Zola said, “and we’re obviously happy to help in this time.”

Luckily, the district had extra time to plan with spring break falling just after Gov. J.B. Pritzker’s order to close schools across the state.

“I know for those that found out about this on Friday and had to turn around and be ready for this on Monday, that was extremely challenging,” Unit 4 director of food services Laura Dees said. “We were fortunate where we had a week delay, where we kind of got our bearings and got things together.”

The extra week gave them time to have a large food truck bring in extra supplies and plan out how they’d put together the meals and utilize buses.

The meals included milk, cheese cubes, yogurt, pretzels, peanut butter and jelly sandwiches, and a meal akin to a Lunchable. This week, Dees said, the district focused on food it already had because of shortages across the country.

Next week, she said, Unit 4 may include some “take-and-bake” frozen items for families to take home.

The Urbana school district, meanwhile, took a different approach to meal distribution. Instead of providing an entire week’s worth of meals at once, the district is giving out one breakfast and one lunch to each student each day from 10 a.m. to noon at Dr. Williams Elementary School, Dr. King Elementary School and Urbana High School.

Meals are also being distributed to seven neighborhoods around town. Handing out meals daily ensures that the food is fresh, including today’s turkey and cheese wraps, Superintendent Jennifer Ivory-Tatum said.

Numbers didn’t quite hit the 150 families per drive-up site, but Ivory-Tatum expects those figures to grow as more people hear about the service and the weather warms up.

“We had no idea in terms of what to expect in terms of turnout, so you always plan for more and not run out,” Ivory-Tatum said. “We’ll adjust numbers as we go. As the word gets out and more people start coming, if we need to make more than the 150 for each site, we’ll definitely do that. We’re pleased with how the day went, for sure.”

In Champaign, Zola helped direct traffic and keep families informed through their closed windows while new meals were delivered as food service workers, bus drivers and monitors, Kids Plus workers, teachers’ assistants, secretaries, principals, central office staff and others worked to prepare and distribute the food.

“In a difficult situation, everyone steps up in ways and appreciates what we had and what we want to get back to at some point, which is in our schools and in our classrooms,” Zola said. “But in the meantime, we’re going to do what we can as a community and a school district to continue to serve our families and meet their needs as best we can.”