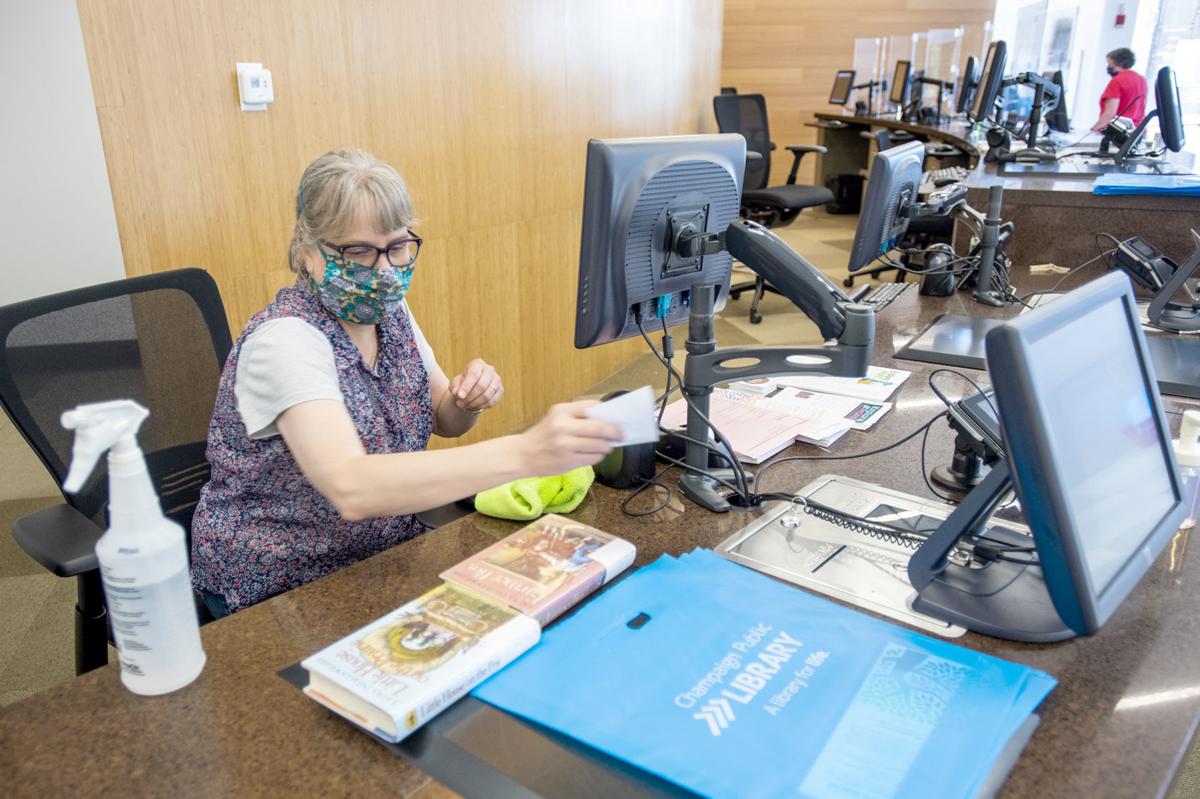 Library assistant Barbara Opal checks out books at the front desk for pick-up outside at the Champaign Public Library on Monday. 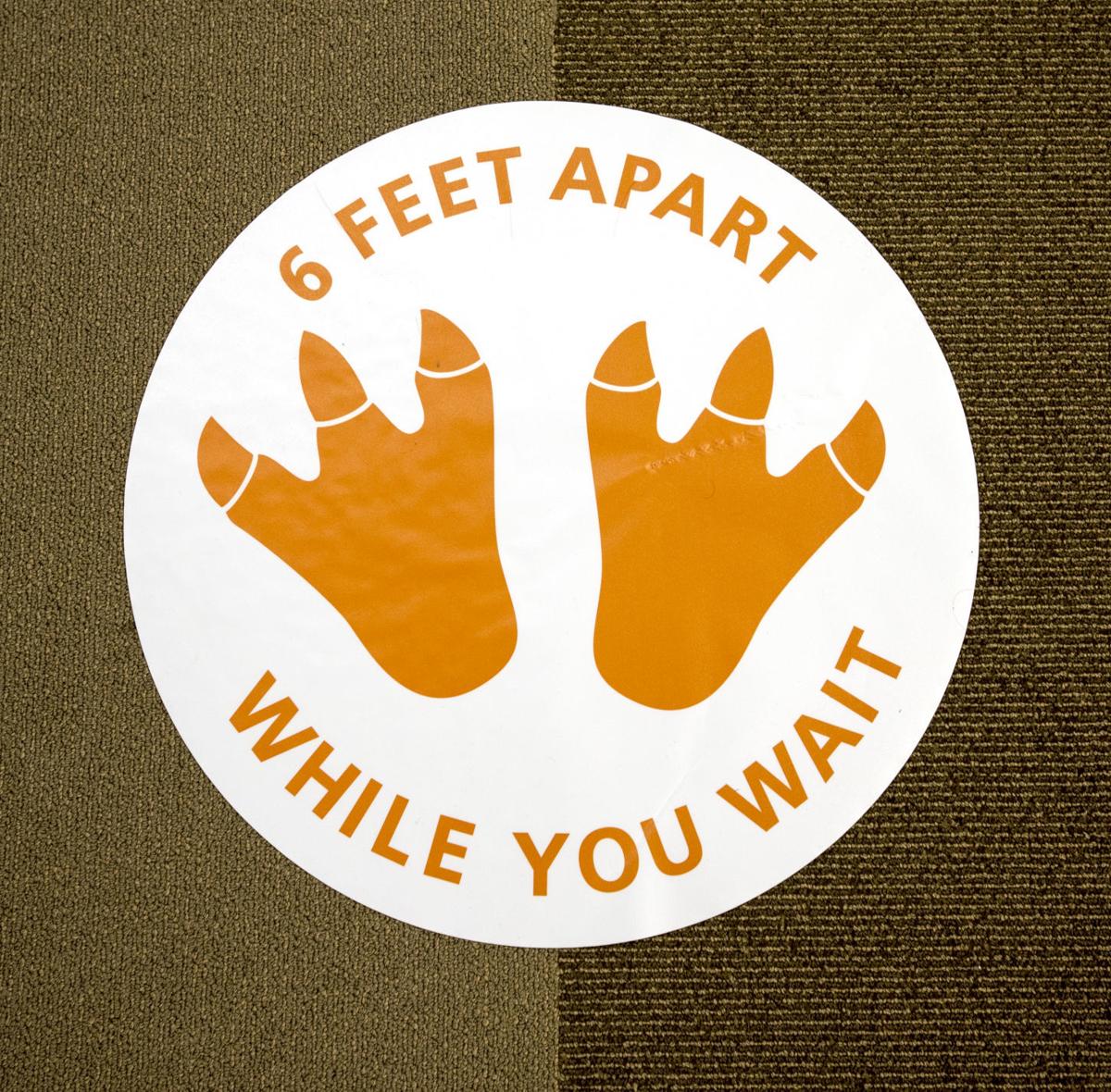 A sticker on the floor by the desk in the children's department with funny feet at the Champaign Public Library on Monday, June 22, 2020. 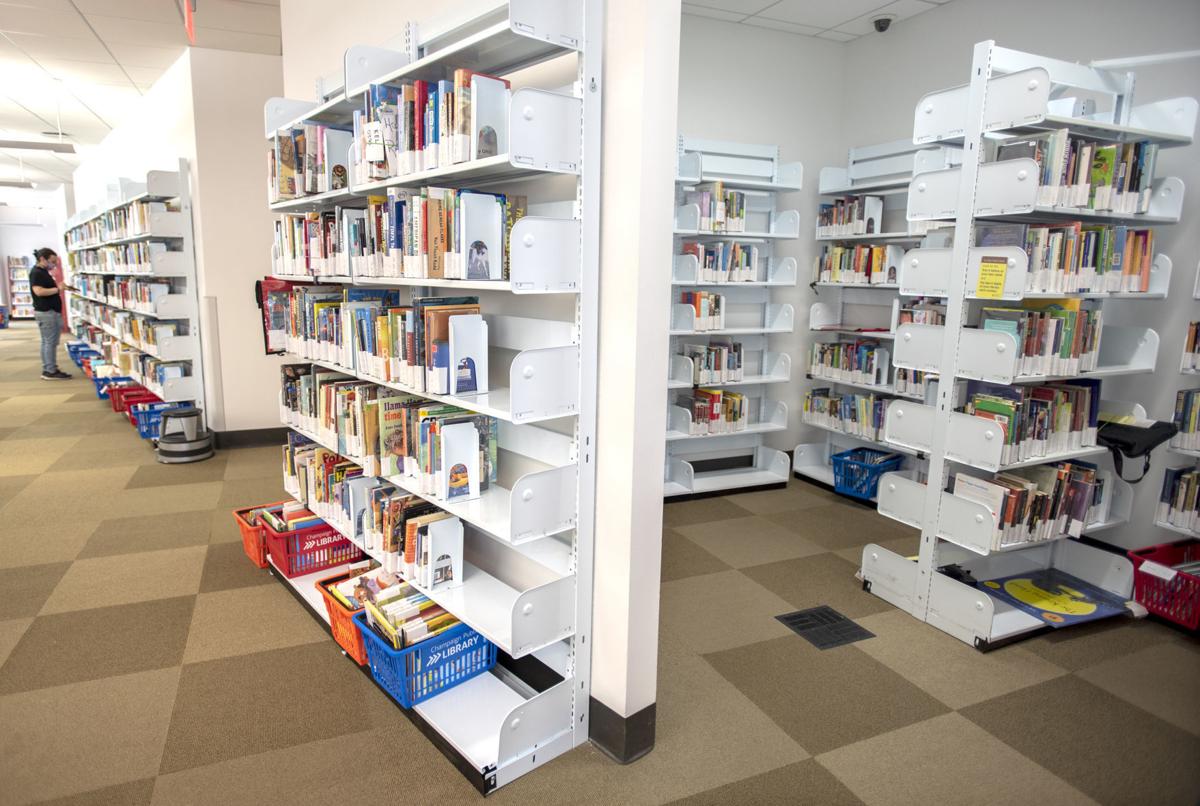 Library Page Charlie Newman shelves items in the newly extended hold section at the Champaign Public Library on Monday, June 22, 2020. the area used to be just the small room on the right, but has expanded down the wall of the main area.

Library assistant Barbara Opal checks out books at the front desk for pick-up outside at the Champaign Public Library on Monday.

A sticker on the floor by the desk in the children's department with funny feet at the Champaign Public Library on Monday, June 22, 2020.

Library Page Charlie Newman shelves items in the newly extended hold section at the Champaign Public Library on Monday, June 22, 2020. the area used to be just the small room on the right, but has expanded down the wall of the main area.

CHAMPAIGN — If you love to read, this will be the reopening you’ve been waiting for.

Public libraries in Illinois can open their doors again starting Friday, when Phase 4 of the state’s five-phase reopening plan is expected to take effect.

Not all libraries will reopen the first day they can, however.

The Champaign Public Library and Urbana Free Library plan to reopen on Day 1. But the Tolono Public Library will likely wait until early July, and the Danville Public Library is tentatively looking at reopening June 29.

Library officials say they’ve been doing extensive planning to make their reopenings as safe as possible.

Expect to wear a face mask when you enter your library and to find capacity limits and reduced or no seating.

“We’ve missed our visitors and our customers.”

Some things to expect at the Champaign library will be a continuation of what’s become a thriving curbside pickup service, which will reduce the number of people going inside the building and help with social distancing, according to Pittman.

Also to continue will be book quarantining. When people return books, the books go straight into plastic bags and each bag is dated and set aside for three days, she said.

There will also be, as in other public places that have reopened, extra cleaning and sanitizing and decreased seating, Pittman said.

“We won’t have as many public computers available, so we will be limiting use to an hour at a time,” she said. “So we will see how that does. We will have to see how the demand is.”

The library staff has a checklist that includes sanitizing all computer equipment after each user and sanitizing high-touch areas like elevator buttons frequently, Pittman said.

Both the main library and Douglass branch facility will resume their normal hours. The cafe at the main library will be open, but all in-person programs and public use of meeting space will be off the table until after Sept. 7, Pittman said.

That means the library will be open only for limited services, and no seating will be available other than at computer stations, each of which will be available for one-hour sessions, one session per patron per day.

This is all intended to keep capacity in each room of the library below the allowable limit, according to Amanda Standerfer, the library’s director of development and promotion.

Capacity limits will be posted around the building, and patrons are asked not to bring extra family members or friends along. And there will be a limit of one hour a day in the building.

The Champaign County Historical Archives will be open for one-hour sessions by appointment only, and no meeting rooms can be in use.

While the Urbana library will resume normal hours, the first hour of the day Monday through Saturday will be reserved for people who are more vulnerable to COVID-19.

Danville: Wait till next week

The Danville Public Library was still working on its reopening plan as of Monday, but is looking at a partial reopening tentatively on June 29, according to Director Jennifer Hess.

And, as is the case in Champaign, curbside pickup service will continue, she said.

“I think that’s a great service to provide,” she said.

The Danville library hasn’t been accepting book returns during the shutdown, but as returns resume, Hess said returned items will be quarantined for a few days before they go back into circulation.

The Danville library already has reopened a computer lab with 10 laptops available and sanitized between users, and that will continue as the rest of the library reopens, she said.

The Tolono Public Library has a reopening plan in place, but will wait until its library board approves reopening, according to library Director Janet Cler. For now, she tentatively looks for the library to reopen July 8.

Curbside service and quarantining returned materials will also continue at the library after the reopening, and there will be limited computers available for the public to use , Cler said.

There are wireless keyboards and mice that users will need to pick up and return to the circulation counter, and staff members will sanitize those items in between users, she said.

“We will also be offering notary service, copies and fax service when we reopen,” she said.

Plans for reopening also will include reserving some morning hours for older adults and those with special health needs, Cler said.

While there are going to be capacity limits, that won’t be an issue at the Tolono library. Cler said the library is unlikely to hit its capacity given the flow of patron traffic combined with the library being open so many hours.

“We’re anxious to get everyone back out here,” she said. “We miss seeing our patrons.”

With all four regions well on their way to advancing to Restore Illinois Phase 4 Friday, the state issued dozens of pages of new guidelines for allowed activities, events and businesses. We've combed through them for headlines and highlights.