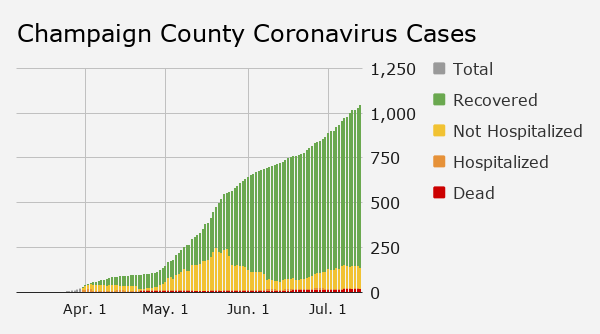 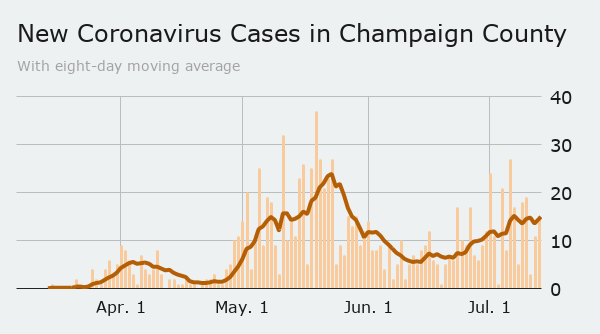 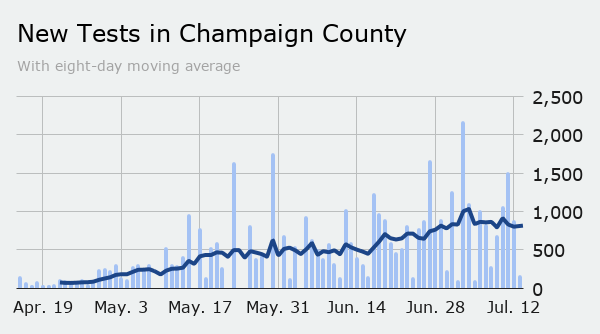 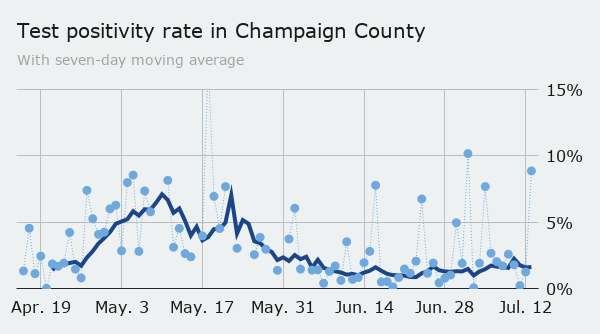 Just two of its residents are hospitalized with COVID-19 but Champaign County added 15 newly confirmed cases Monday to a total that now stands at 1,046.

Other than the single-day positivity rate — 169 new tests, 15 new cases, 8.9 percent — the figures made public Monday by the C-U Public Health District were all encouraging:

— The number of hospitalized residents was down by three.

— The number of fatalities held at two.

Here’s the rundown of Champaign County ZIP codes with active cases, followed by their total number of cases, according to C-U Public Health District data:

AREA: 2 new cases in Vermilion, none in Douglas, Ford, Piatt

Two residents in their 50s are the 86th and 87th confirmed cases in Vermilion County, the public health department announced Monday.

How the 87 cases break down:

No new cases were reported Monday in other area counties:

The 30,012 test results reported Monday followed more than 70,000 total reported the previous two days, driving Illinois to more than 2 million tests conducted since the pandemic began. Illinois became the first state in the Midwest to reach that milestone and the fifth state in the U.S., following California, New York, Florida and Texas.

According to Gov. J.B. Pritzker’s Restore Illinois plan, any of the state’s four regions can me moved back to a more restrictive phase of the plan if there is a sustained rise in positivity rate, a sustained increase in hospital admissions for COVID-19 like illness, a reduction in hospital capacity threatening surge capabilities or a significant outbreak in the region that threatens the public health.

Hospitalizations, however, remain at their pandemic lows. There were 1,362 COVID-19 positive persons hospitalized at the end of Sunday, 334 of which were in intensive care unit beds. The latter number has not fallen below 300 at any point since the state began reporting the metrics in April.

The 136 ventilators in use by COVID-19 patients also represented a near-low for the pandemic.

As the death toll surged in Texas (79 on Monday) and Florida (35), Illinois reported just six coronavirus-related fatalities, giving it a total of 7,193.

The deaths came in three of the state’s 102 counties, IDPH reported: