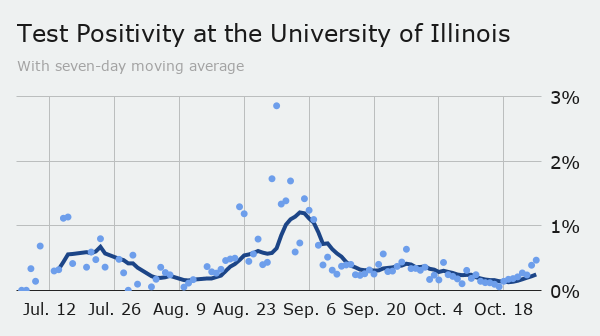 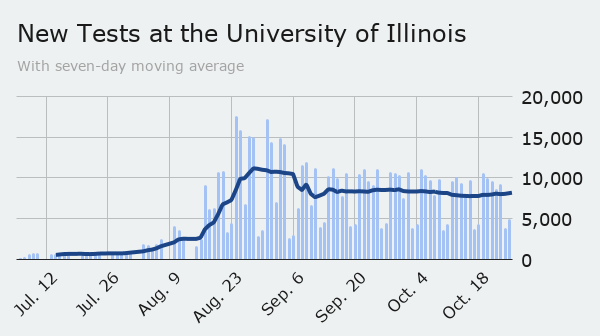 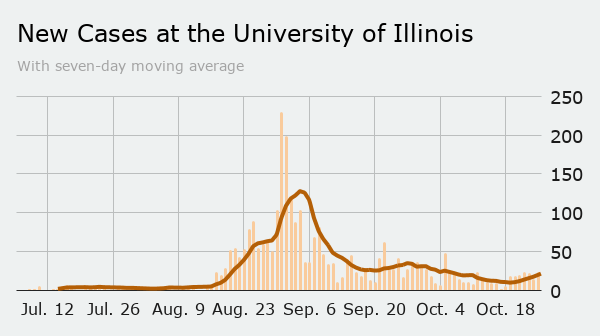 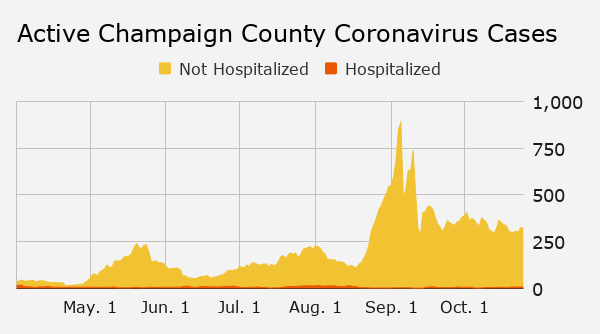 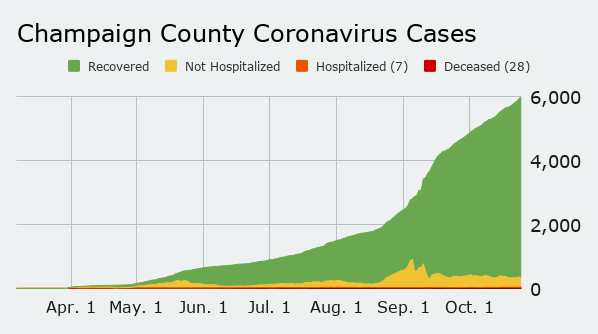 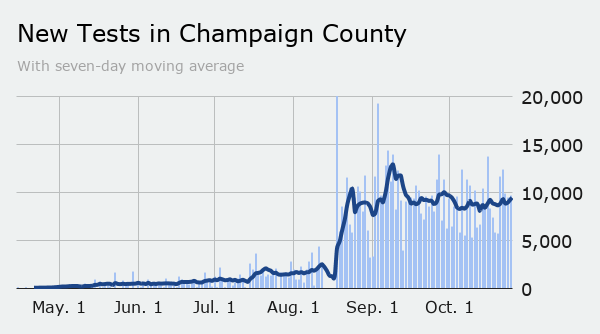 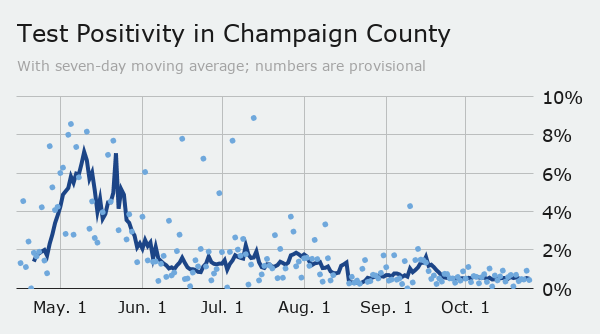 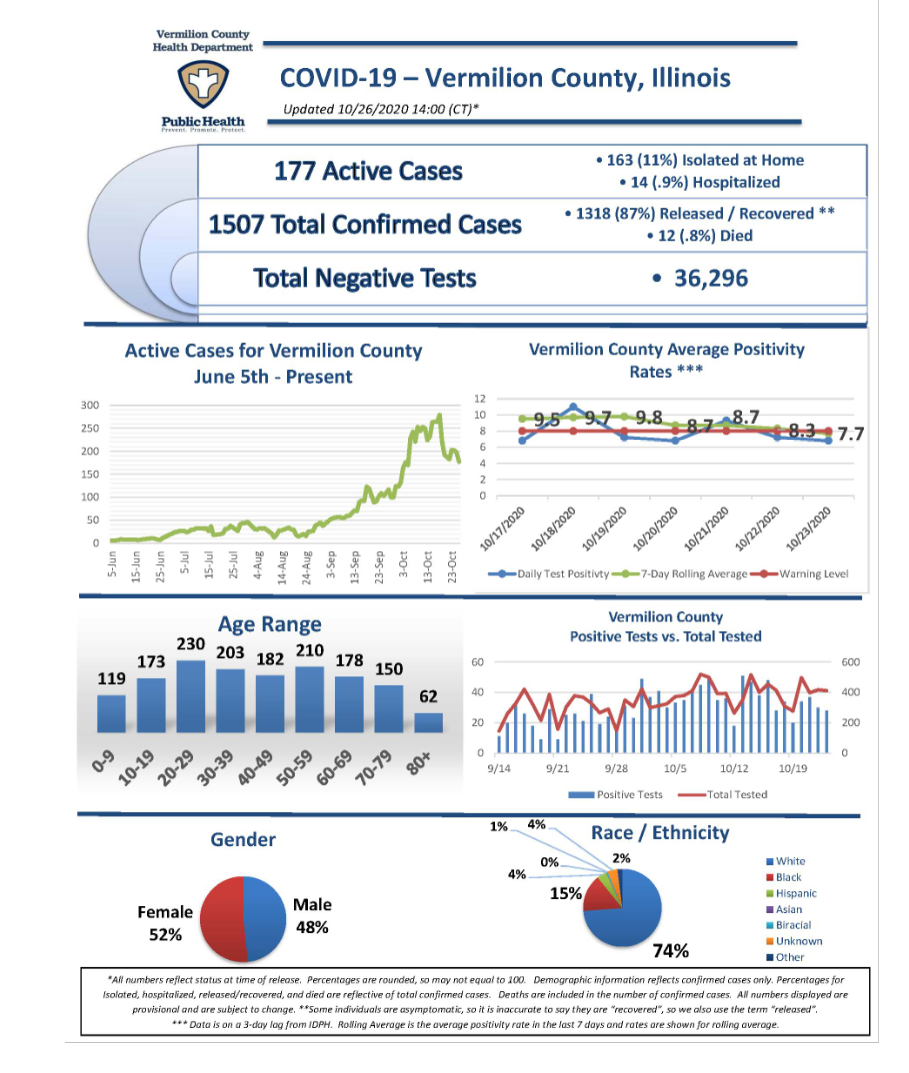 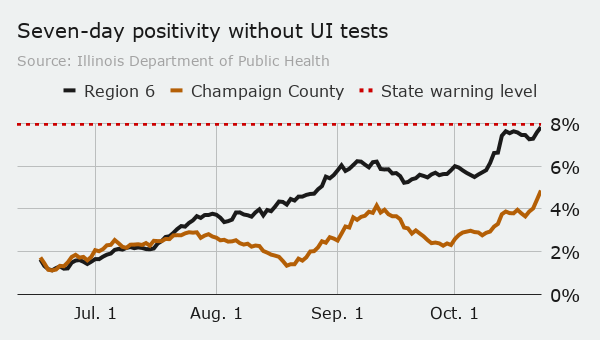 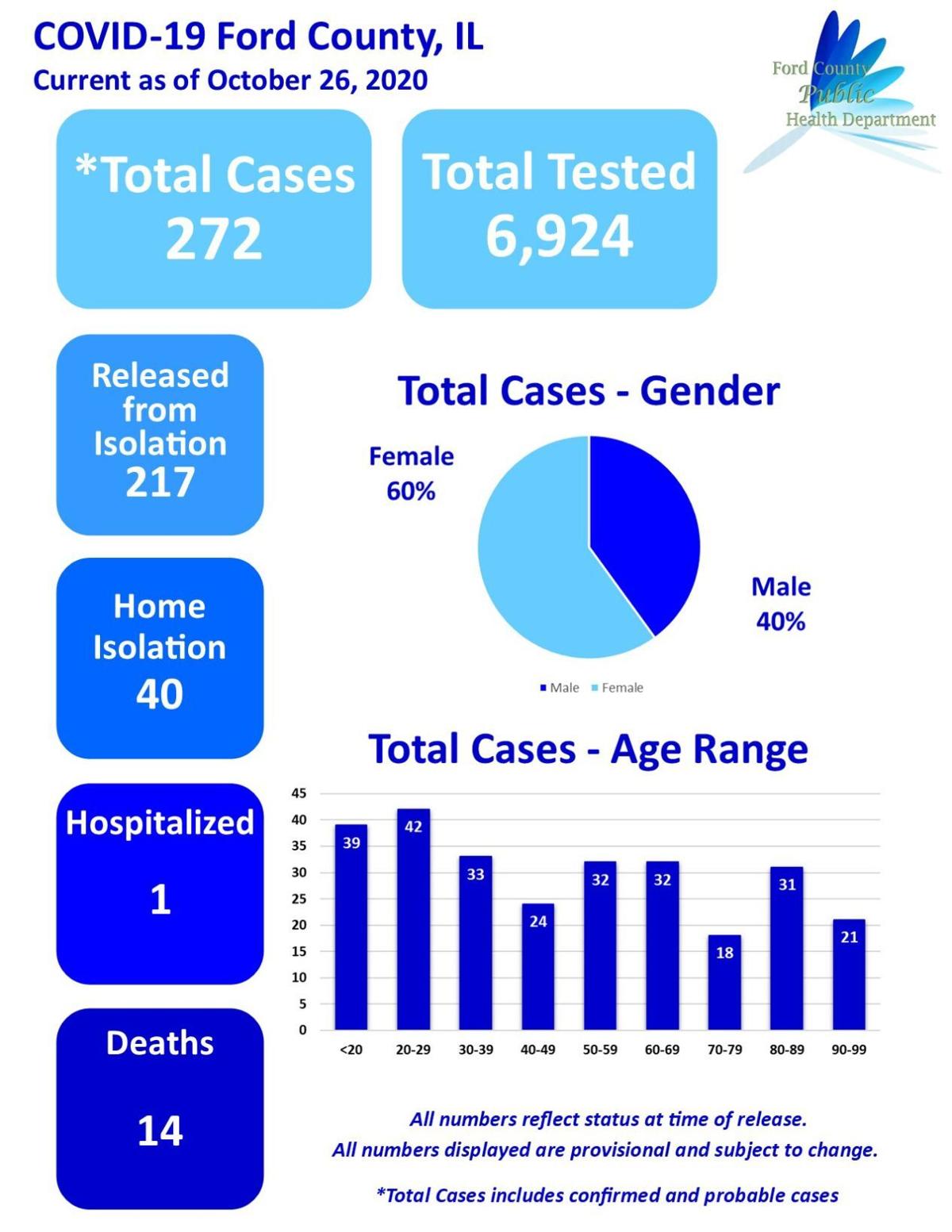 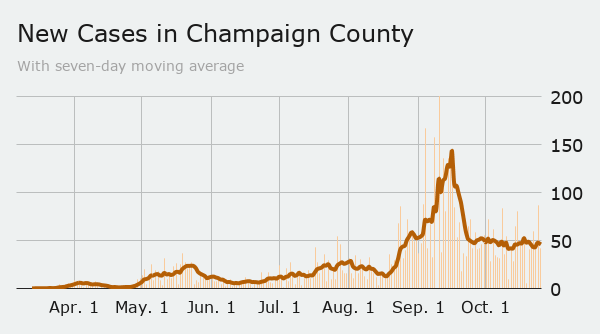 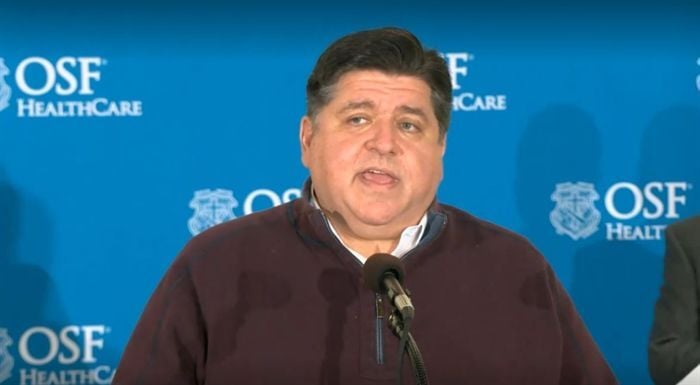 Gov. J.B. Pritzker takes questions about the state's COVID-19 response in Peoria Monday after announcing that two more regions will see increased economic restrictions in an effort to fight the spread of COVID-19.

The school will undergo deep cleaning this week, Larson said.

Students are scheduled to return on Nov. 10.

Unity is just the latest school to move from in-person learning to remote. Elsewhere:

— Rantoul's Broadmeadow Elementary announced Monday it would do likewise after a single employee case led to 20 close contacts being sidelined.

With 19 of the close contacts being Broadmeadow employees, "we do not have enough staff to cover classes and continue teaching in person," Principal Amy Blomberg wrote in a letter to families Monday. "The last time the COVID-19-positive individual was in the school setting while they were contagious was October 23, 2020."

— Monticello High announced last week that its remote learning period, oroginally scheduled to last a week, was extended until Nov. 4.

— The Arcola district's remote learning period, which began on Oct. 20, is scheduled to last through Friday.

The number of confirmed cases in Piatt County now stands at 267 after the Dewitt Piatt Bi-County Health Department reported 22 cases over the past three days early Monday evening.

The new cases by day:

Of those, 324 have been reported in the past two weeks.

The seven-day rate without University of Illinois testing factored in — the figure the state will use for Champaign County in its mitigation plan — is 4.9 percent through Oct. 23.

The seven-day rate for the East Central Illinois region Champaign County is a part of on the state’s mitigation map (Region 6) is 7.8 percent.

— The number of county residents hospitalized with COVID-19 remained seven for the sixth straight day.

The Ford County Public Health Department also reported two fatalities — involving a man and woman, both in their 80s — which the Illinois Department of Public Health announced over the weekend.

The county's case total grew to 272, with 204 classified as confirmed and 68 as probable.

Forty residents are isolating at home and one is hospitalized.

Champaign’s Legends Golf Course will remain closed through Tuesday after an “outside worker” tested positive for COVID-19, officials announced.

“We are currently waiting for the COVID testing results of our staff to come back,” the course announced in a statement on its website. “We are thoroughly sanitizing the facility at this time.”

While hospitalizations remain 14, another metric took a turn for the better Monday: Active cases fell by 21 overnight, to 177.

Overall, the number of confirmed cases in the county rose by 21 Monday, to 1,507.

The new cases range in age from infancy to 80s:

The Danville Veterans Affairs Illiana Health Care System has 42 active cases — 33 involving veterans and nine among employees — according to data on the U.S. Department of Veterans Affairs website.

Over the course of the pandemic, there have been a total of 224 cases at the Danville VA — 136 veterans, 42 employees — as well as three "known deaths."

Meanwhile, six of the 16 Danville Correctional Center staff members who've tested positive for COVID-19 have active cases, according to data from the Illinois Department of Corrections.

No inmates have tested positive at the Danville prison, records show.

The state’s seven-day positivity rate increased, as it has for much of the month, from 6.1 to 6.3 percent:

The seven-day positivity rate on campus remained 0.2 percent for the fourth straight day.

Six of the state’s 11 coronavirus mitigation regions will be under escalated restrictions starting Wednesday as hospitalizations for COVID-19 show a quickening rate of increase.

“So no matter where in Illinois you call home, as you go about your daily lives, remember that this is not over,” Gov. J.B. Pritzker said at his daily COVID-19 briefing in Peoria. “There seems to be a COVID storm on the rise. And we have to get prepared.”

As of Sunday night, there were 2,638 people hospitalized with COVID-19, including 589 in intensive care unit beds and 238 on ventilators — all were once again highs not seen since early to mid-June.

— ICU bed usage increased by 118 to 534 on average, an increase of 28 percent from the previous week.

— Average daily ventilator use increased by 51 from the week prior to 210, a jump of 32 percent.

“At the beginning of the pandemic, we were concerned about overwhelming our hospitals and we must take action now to prevent that possibility,” Illinois Department of Public Health Director Dr. Ngozi Ezike said.

Pritzker’s office on Monday made the announcement that suburban Cook County’s Region 10 will enter Tier 1 of the state’s mitigation protocols after seeing an increase in positivity rate and hospital admissions for eight of the past 10 days. Region 4, which includes the Metro East area on the Missouri border near St. Louis, will see the mitigations after its positivity rate remained above 8 percent for three days.

Region 4 was previously under added mitigations from Aug. 18 to Oct. 9, while Region 10 is the first to trigger mitigations by a route other than three days above an 8 percent seven-day average positivity rate.

The state’s rolling seven-day average test positivity rate hit 6.3 percent Monday, the highest it’s been since June 2. That’s after IDPH reported an average of 4,984 confirmed cases among an average 70,959 test results reported each day from Saturday through Monday. That made for a three-day positivity rate of 7 percent, and the 6,161 cases announced for Saturday set the state’s one-day record.

Another 104 COVID-19-positive individuals died over the previous three days, bringing the death toll to 9,522 among 378,985 confirmed cases and more than 7.3 million tests conducted since the pandemic began. Ezike said if the current trends continue, Illinois is on a path to see 11,000 dead from the virus by the end of the year.

While there is a 97 percent recovery rate — meaning 97 percent of COVID-19-positive individuals are alive 42 days after diagnosis, according to IDPH — Pritzker and Ezike said there are often lasting side effects for survivors.

“There are currently more than 2,500 Illinoisans in the hospital fighting this virus, and unfortunately because we now have so many new people getting infected, that number will likely rise over the coming weeks,” Pritzker said. “Many of those people will survive, but many will have lasting damage to their lungs and other internal organs.”

Ezike said all Illinoisans should take care to wash their hands, maintain social distance, wear face coverings and avoid large crowds, doing all of them together to further protect themselves.

“The goal should not be to be lax with getting infected because the chances of survival are good,” Ezike said. “But as we know, it's not clear who will succumb to this virus or not. Yes, it's true that our older members of society, and people with pre-existing conditions are among the higher risk, but we have heard countless stories of individuals, even teenagers, with no known medical conditions that have succumbed to this virus.”

Dr. Michael Cruz, chief operating officer of OSF HealthCare based in Peoria, agreed that OSF doctors had seen “otherwise healthy individuals who have succumbed to this virus.”

“This is the time when we have to double down,” he said. “We need everyone's help to prevent further escalation of this pandemic in our area, and to help us reduce the impact on our health care resources, which are being used fully at this time.”

He said all Illinoisans should get their flu shot to help avoid strain on the system.

Ahead of the holiday season, Pritzker said people getting together with family and friends should wear masks and keep six feet of distance from each other, even when gathering in private.

Pritzker once again reiterated that the state would enforce mitigations, potentially with revocation of gambling machine or liquor licenses after first issuing citations or dispersal orders.

“Where we know we've got scofflaws, where we know there are bars and restaurants or others who are putting the public in danger, we have asked our state police to go to those areas,” he said.

The mitigations do not apply to schools, which have separate guidance provided by the Illinois State Board of Education which remains in effect. Districts can choose locally whether students will participate in in-person learning.