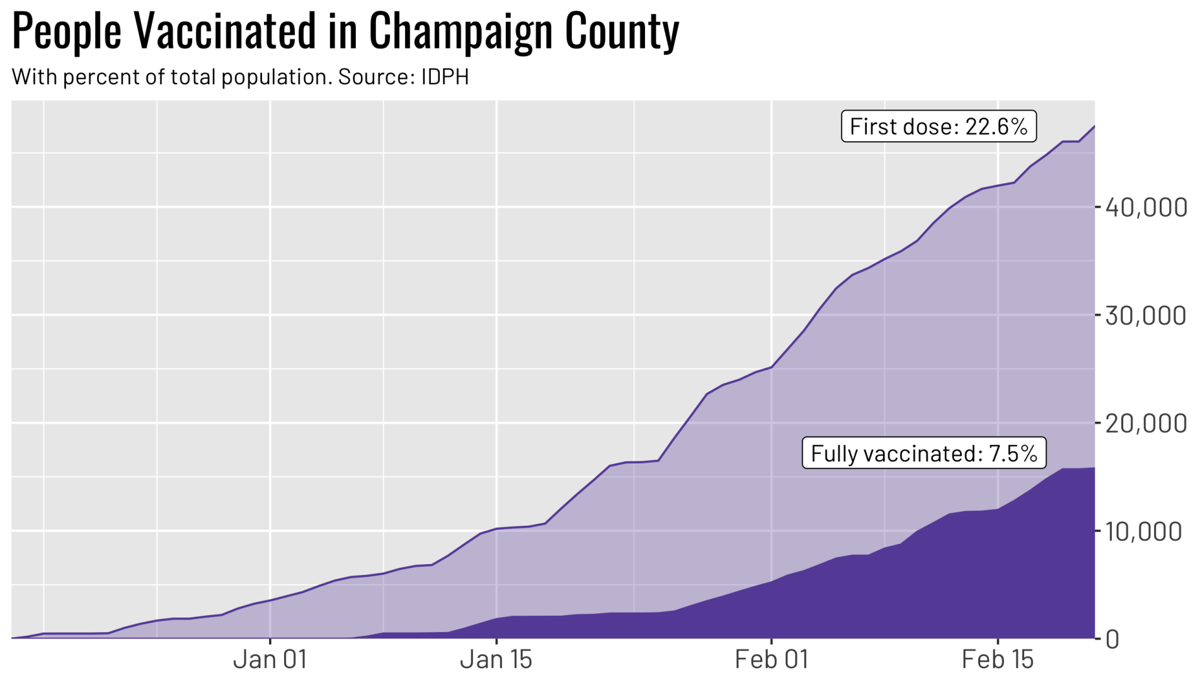 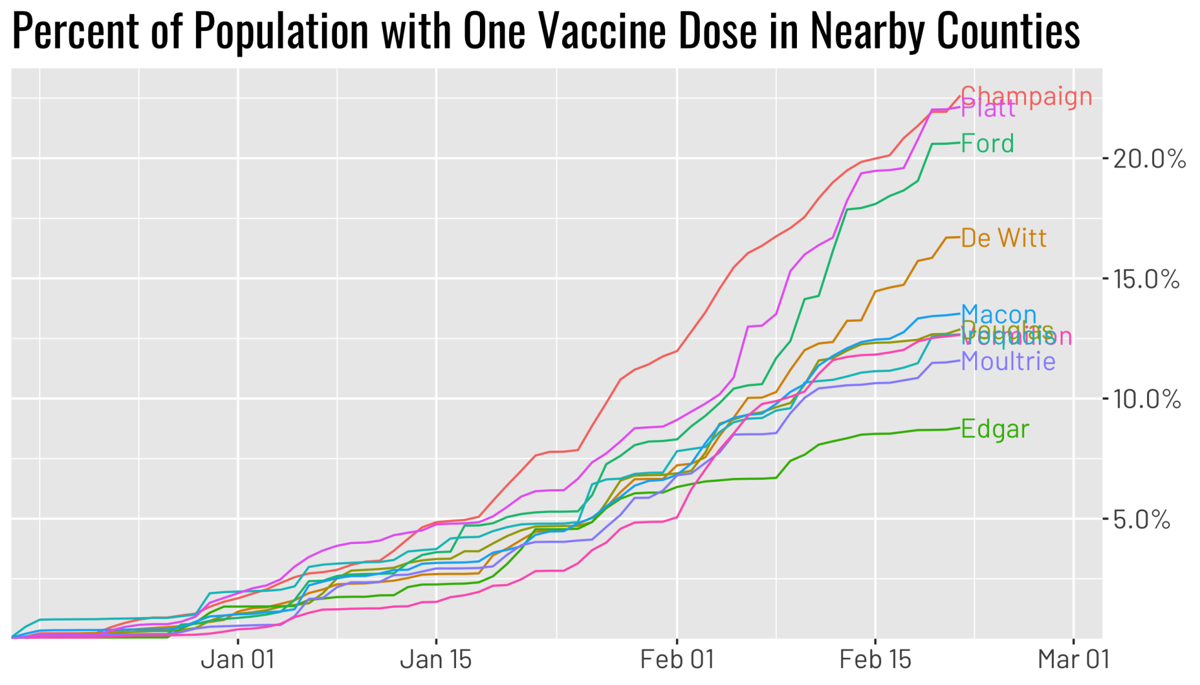 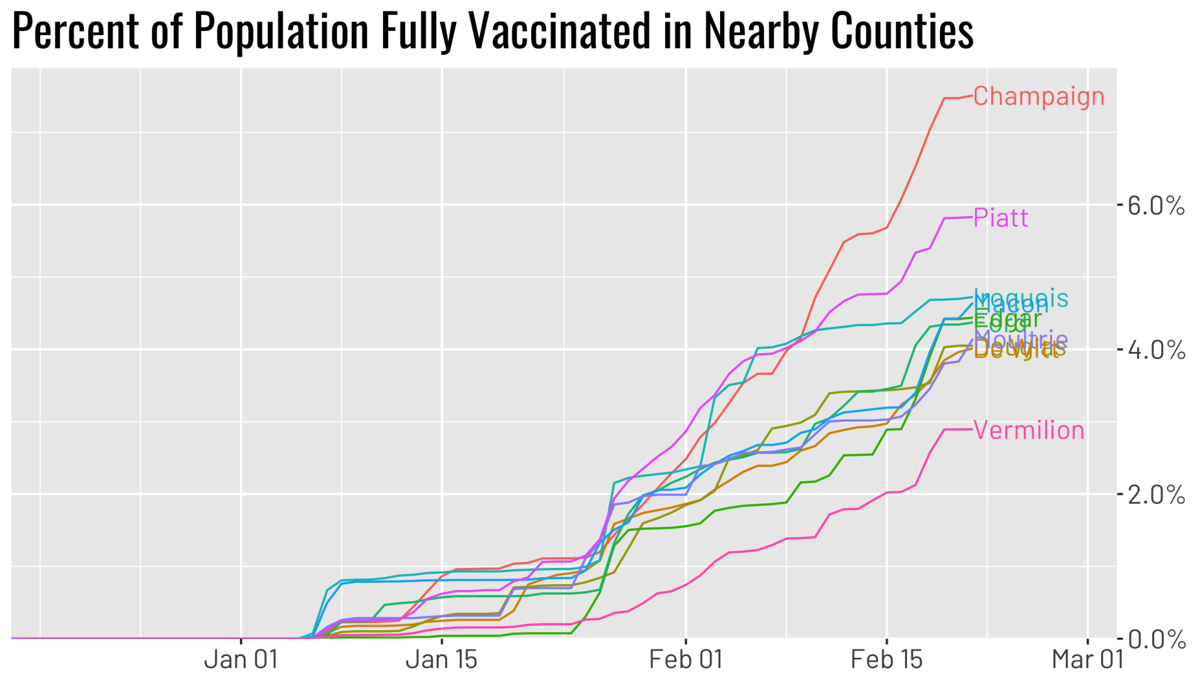 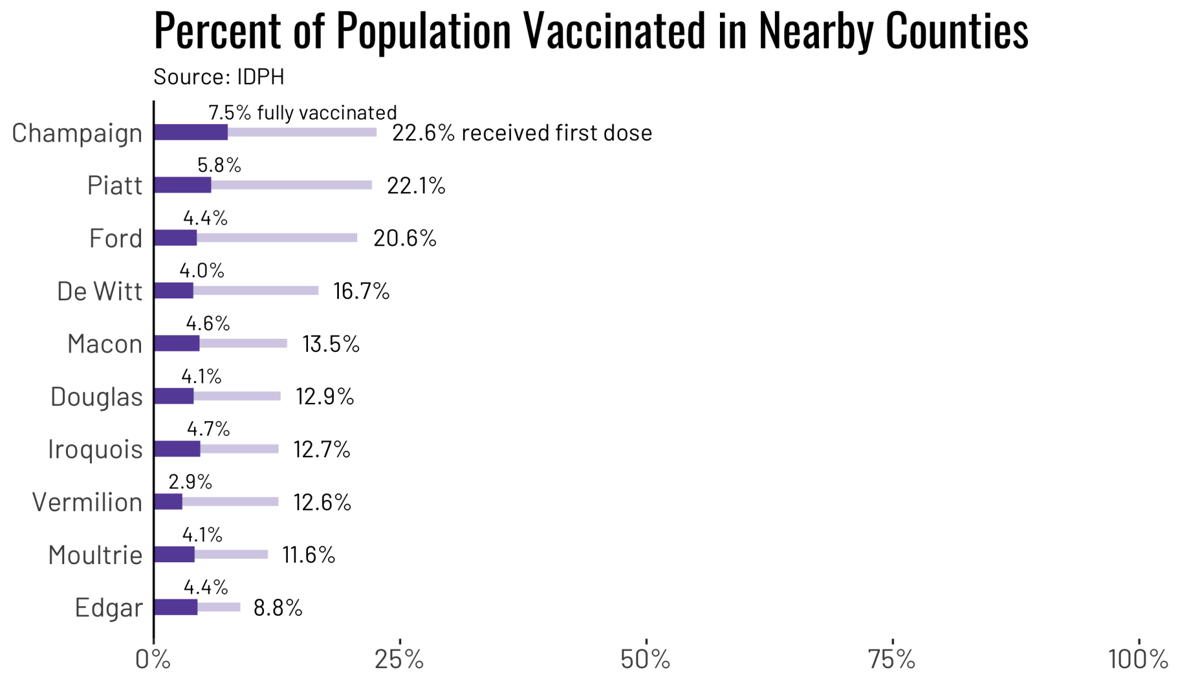 The number of Champaign County residents who have received the first dose of the COVID-19 vaccine rose by 1,429, according to data updated Monday.

— The total number of county residents who have received the first dose now stands at 47,487 — or 22.6 percent of the population.

Among vaccine-eligible adults in the county, the percentage rises to 27.5 percent.

Of Illinois' 102 counties, only three have a greater percentage of total residents fully vaccinated than Champaign: Adams (14.54 percent), Sangamon (8.02 percent) and Peoria (7.57 percent).

Among vaccine-eligible adults, 9.1 percent of Champaign County has been fully vaccinated.

Here's an overview of Monday's vaccine data from other area counties, as provided by IDPH. (Click on county name to go to IDPH page with full statistics).

DeWITT/PIATT COUNTIES: 'We will be unable to maintain our current pace,' Remmert says

A lack of inventory is prompting the DeWitt/Piatt Bi-County Health Department to prioritize second doses of COVID-19 vaccines at clinics this week.

It is also prompting the department to ask lower-risk residents who have first dose appointments to reschedule.

“If you have scheduled a first dose appointment and are not considered vulnerable and age 65 or older, please consider canceling your appointment this week,” health department administrator Dave Remmert said.

Cancellations should be emailed to the health department at dremmert@dewittpiatthealth.com.

Remmert said doses scheduled for delivery last week have not arrived, which may make it impossible to keep up with the current pace of vaccinating 1,650 people per week.

Remmert added that this week's scheduled delivery is just 200 doses, with 300 anticipated next week. He hopes the late shipments arrive on Tuesday.

“We will be unable to maintain our current pace. As such, we will not be able to load any additional SignUpGenius links for new appointment slots until more vaccine becomes available,” he said.

When clinics resume and appointments are being taken, SignUpGenius links will be posted at dewittpiatthealth.com.

Clinics are not being canceled this week unless the department does not get any new shipments of the vaccine, Remmert said.

Gov. J.B. Pritzker said Monday that the state will move ahead with plans to expand vaccine eligibility under Phase 1B of its vaccination plan later this week.

A total of 73,181 COVID-19 vaccinations were administered statewide combined Saturday and Sunday. The state has administered over 2.2 million doses to date, with 4.4 percent of the state’s population being fully vaccinated.

In an unrelated Monday news conference, Pritzker said the Thursday eligibility expansion will include individuals aged 16 and older who have comorbidities, disabilities and underlying conditions. Residents will not be required to provide proof of an underlying condition in order to receive a vaccine, he said.

Residents currently eligible for a vaccine under Phase 1B include people aged 65 and older and frontline essential workers.

The state’s seven-day rolling average for administered vaccinations stood at 55,499 Monday. The average vaccination rate has dropped over the past week as the state saw inclement weather and shifted focus to administering second doses to those who have already received their first.

“We saw a small delay last week because of weather nationally in the delivery of vaccines,” Pritzker said Monday. “But now, (health departments) are seeing many more second doses being delivered to them than they’ve seen before.”

Pritzker said the initial lag in vaccinations was due to a decision to stay in Phase 1A longer than other states.

“We wanted to make sure in Phase 1A that health care workers were covered completely,” he said.

Pritzker said he expects the state will receive up to 500,000 vaccine doses from the federal government this week, an increase from the nearly 300,000 per week the state has received in weeks past.

Additionally, a new single-dose vaccine from Johnson & Johnson could be granted authorization from the U.S. Food and Drug Administration in a Friday hearing. If approved, the new vaccine could make millions more doses available to states in the coming weeks.

More than 850 vaccination sites are currently open across the state, with more expected to come online in the coming weeks as the state builds vaccination capacity and the federal government works to increase production to meet national demand.

Each site will be managed through a partnership with Illinois Department of Public Health and the Emergency Management Agency and will be supported by members of the Illinois National Guard.

“These new mass vaccination sites and mobile teams will build on our partnership with local health departments and help ensure we administer doses as quickly as we receive them,” Pritzker said in a Monday statement.