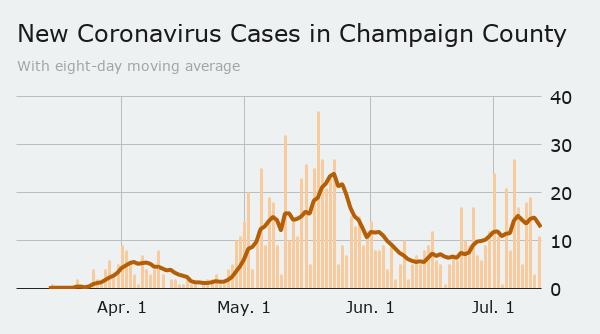 A look at newly confirmed COVID-19 cases in Champaign County over time. 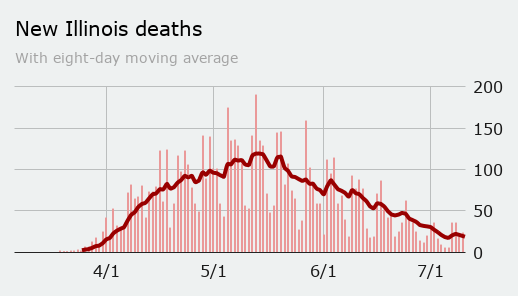 A look at coronavirus-related deaths statewide over time. 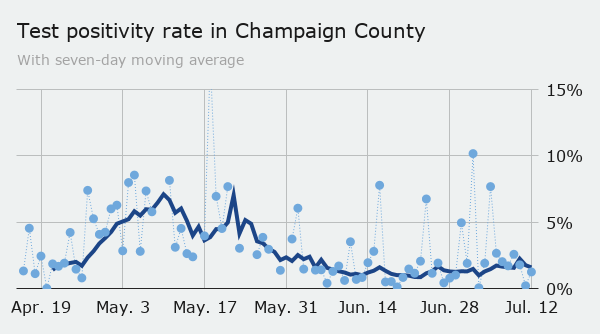 A look at the number of new tests that have been positive in Champaign County over time. 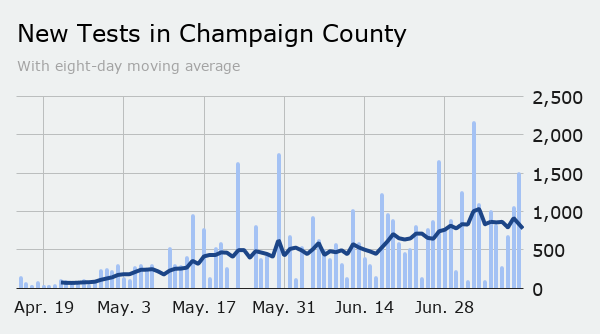 A look at new coronavirus tests in Champaign County over time.

Champaign County is two positive tests away from its 1,000th confirmed case of COVID-19.

On Thursday, 115 days after reporting its first case, the county added 18 more, pushing its pandemic total to 998.

The encouraging news: Just 125 of those are active cases, down six from the day before, while 857 are considered recovered.

Here’s the rundown of ZIP codes with active cases, followed by their total number of cases, according to C-U Public Health District data:

Within four hours of it being announced Thursday morning, more than 4,000 people took a pledge from the University of Illinois to follow guidelines to prevent the spread of COVID-19.

Signers of the voluntary pledge commit to check their health every morning, wear a mask, wash their hands often, practice social distancing, participate in contact tracing and exposure-notification and get tested regularly.

After it was announced, the Graduate Employees Organization and the Non-Tenure Faculty Coalition Local 6546 warned their members on social media not to sign the pledge until union leaders met with administrators about the its potential impact on members.

UI spokeswoman Robin Kaler said the names of who pledged won’t be used by the UI.

“The only thing we might use from those who have taken the pledge is the unit designation, and that would be to have a friendly competition among colleges and units to see who has the highest percentage of participation,” she said.

When the UI re-opens in the fall, students and faculty will be required to wear masks, and not doing so could lead to discipline under the student code and unpaid leave for faculty and staff, administrators have said.

But the UI hopes most students and employees will voluntarily comply with COVID-19 guidelines.

Administrators are working on an educational campaign developed with the psychology, community health and communications departments.

“Our goal is to build a culture of looking out for each other by following the health and safety guidelines in the pledge,” Kaler said. “We know it's critical that everyone who wants to be on campus needs to think about more than just themselves, so we developed the pledge as one way to become ambassadors for the campaign.”

The 36,180 test results reported yielded 1,018 positive results for a one-day positivity rate of 2.8 percent — well within the range of the past month. The seven-day rolling average remained at 2.6 percent.

At the end of Wednesday, there were 1,507 people in Illinois reported to be in the hospital with COVID-19. That was 11 below the previous day and the second-straight day with more than 1,500 hospitalized with the virus after five straight days of fewer than 1,400.

About 38 percent of the state’s hospital beds were open at the end of Wednesday, with 4.3 percent of the occupied beds used by COVID-19 patients. That number was as high as 15 percent at the height of the pandemic.

At the height of the pandemic, more than 19 percent of the state’s ventilator supply was in use by COVID-19 patients, but the state implemented other procedures to avoid putting patients on ventilators and padded its supply by the thousands in case of a surge.