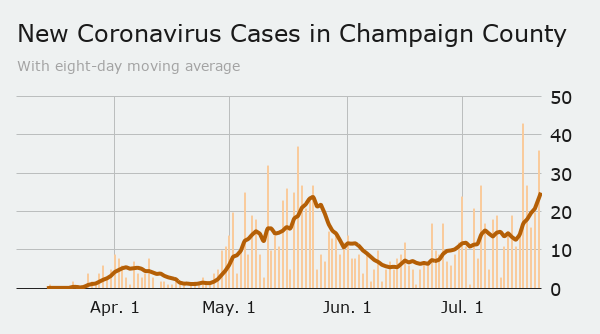 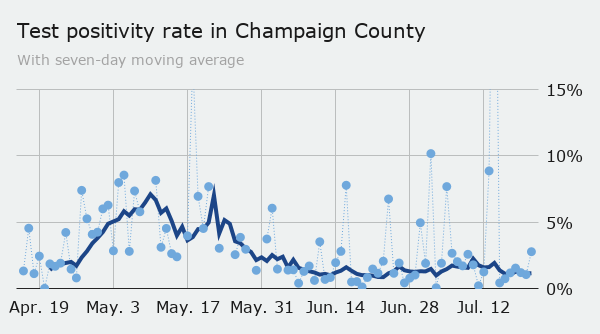 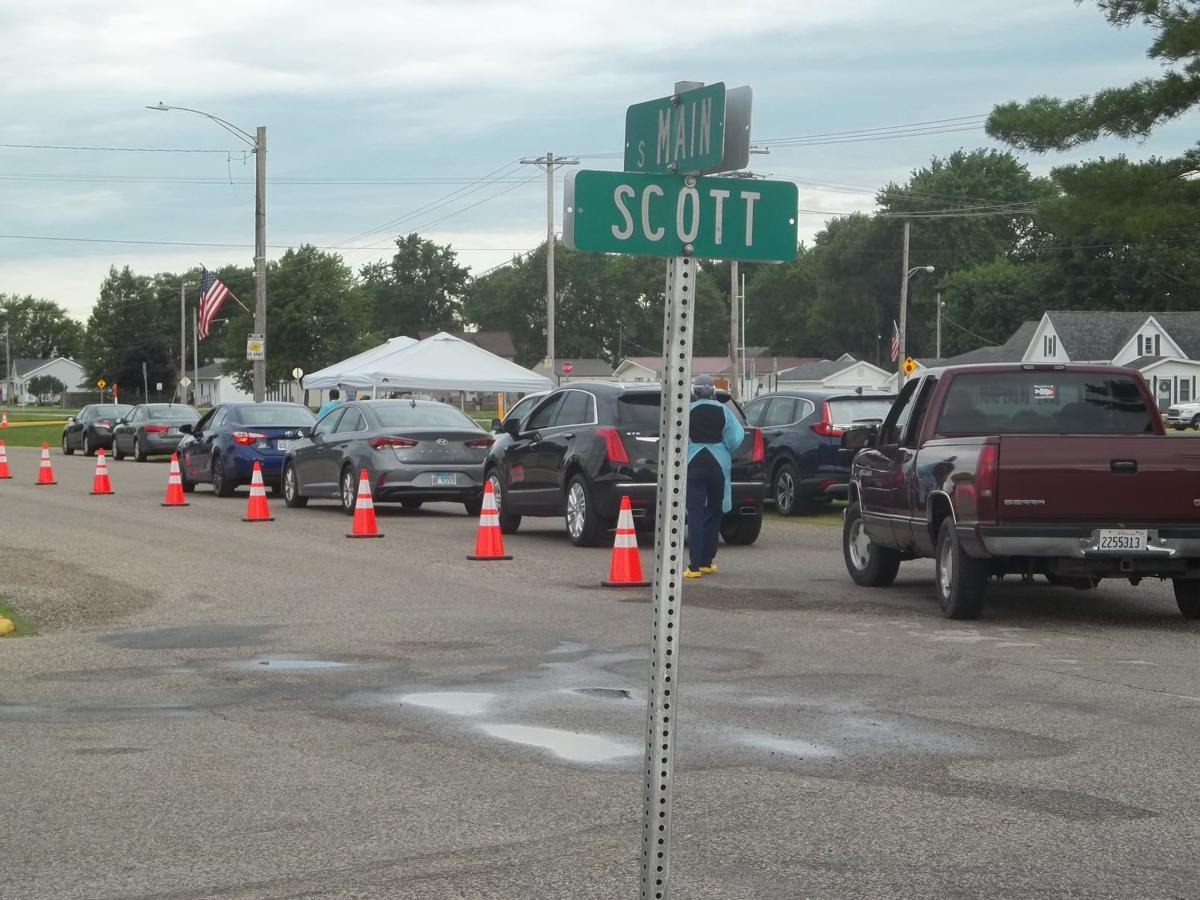 The state-run mobile testing clinic drew a big crowd in Oakwood. Shut down early Tuesday because of storms, it's scheduled to reopen Wednesday in Westville. 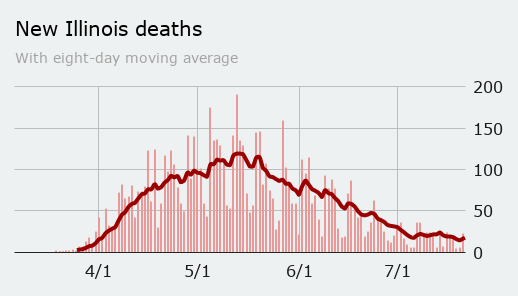 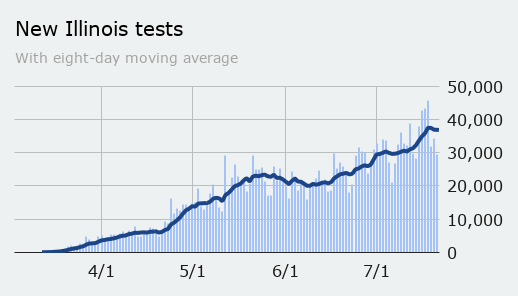 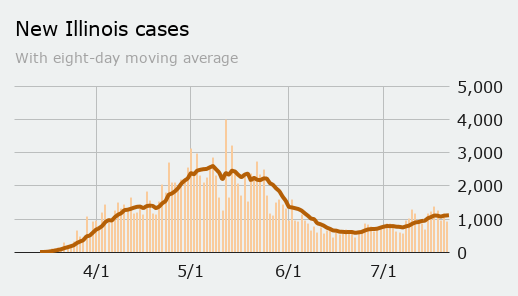 A  look at the number of newly confirmed COVID-19 cases statewide. 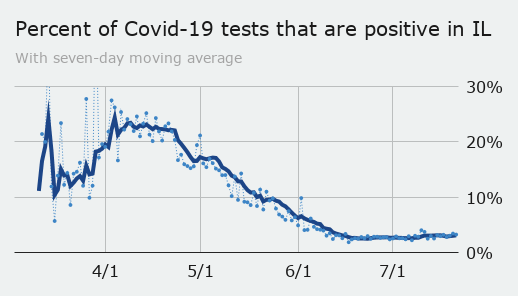 In the span of five days, Champaign County has had two of its three biggest 24-hour increases in new COVID-19 cases.

Tuesday’s numbers were mostly discouraging all the way around:

— Hospitalizations continued to climb — by two in a day, to 10. On Friday, that number was three.

— New cases were added throughout the county — from three in Foosland (pop. 99) to 10 in Urbana’s 61802 ZIP code, which passed Champaign’s 61822 for the third-most active cases in Champaign County.

Here’s an updated rundown of Champaign County ZIP codes with active cases, followed by their total number of cases, according to C-U Public Health District data:

Four Vermilion County residents in their 30s, one in their 20s and one in their 70s tested positive for COVID-19, pushing the county’s total to 113.

One of the 22 cases involves a resident who has been hospitalized, Toole said.

Of Tuesday’s six new cases, two live in the same household, and two others share a household with multiple people who tested positive earlier.

The state’s mobile COVID-testing team collected specimens from 161 people in Oakwood on Monday. Tuesday’s clinic was cut short due to storms but will reopen, weather permitting, from 9 a.m. to 4 p.m. Wednesday at Westville’s Judith Giacoma Elementary.

One was at the Illinois Department of Juvenile Justice’s St. Charles facility, where 16 staff members and three youths have tested positive.

The other happened at the Chester Mental Health Center in Randolph County, where 27 staff and five residents have newly confirmed cases of COVID-19.

Meanwhile, the statewide seven-day positivity rate increased by a tenth of a percent, to 3.1.

The individual is employed by the RPC, not the Unit 4 school district.

"The center was not yet opened to students, so no children have been exposed," the RPC said in a statement.

The center will close for two weeks and not go forward with Monday's planned reopening. All staff members at that location will have to test negative twice for COVID-19 before being allowed back into the center, the RPC said.

"The RPC has implemented additional safety protocols including but not limited to checking the temperature of staff before entering our locations to make sure they are healthy, providing hand sanitizer, following social distancing protocols, increased disinfecting of surfaces and equipment, and wearing face coverings or masks in alignment with CDC public guidance," the RPC said in its statement.

"These extra precautions are in addition to the strict safety protocols already in place at RPC sites, such as regularly wiping down high-touch areas."

A woman in her 70s is the 43rd case of COVID-19 in Ford County, local health officials said.

Thirty-three of those cases are confirmed and 10 are probable. Last week, the Ford County Public Health Department began a new way of classifying cases, separating “confirmed” and “probable” in its news updates. Both groups, however, “are treated the same with regards to isolation and contact tracing,” the department noted.

A breakdown on the status of the 43 total cases:

Ten of those are considered active, including six announced in the past 24 hours (four Tuesday morning, two Tuesday afternoon):

Remmert also announced Tuesday that one case was removed from Piatt's total, saying: "The individual was without symptoms and received two negative test results."

IHSA: Board meeting pushed to next week, pending guidance from IDPH, ISBE

The fate of fall sports for high school teams in Illinois is still undetermined.

And any clarity schools were hoping to receive on Wednesday about how the coronavirus pandemic is affecting their plans will have to wait.

IHSA Executive Director Craig Anderson said in a statement on Tuesday the scheduled IHSA Board of Directors meeting, scheduled for Wednesday, will be postponed until July 29.

The IHSA is set to take part in a roundtable discussion with leaders from the Illinois Department of Public Health and the Illinois State Board of Education on Friday, according to Anderson.

"We expect this meeting will provide important guidance on how the IHSA will proceed with fall sports," Anderson said.