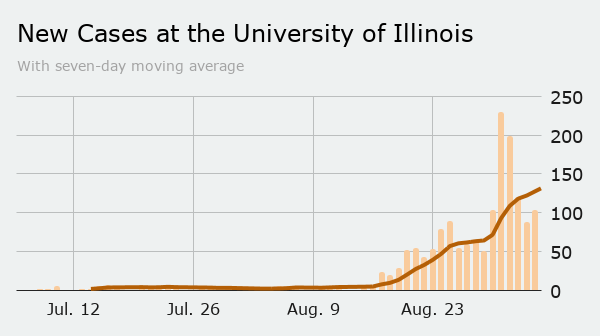 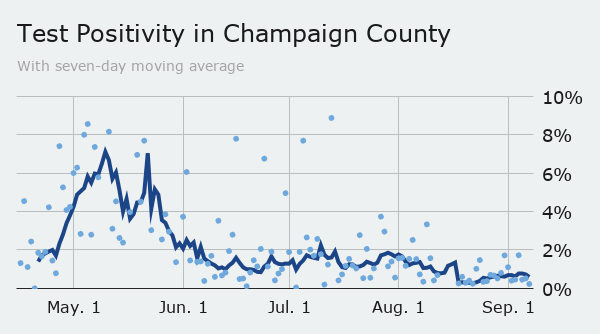 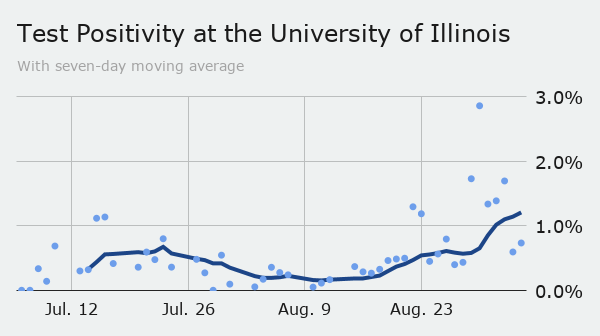 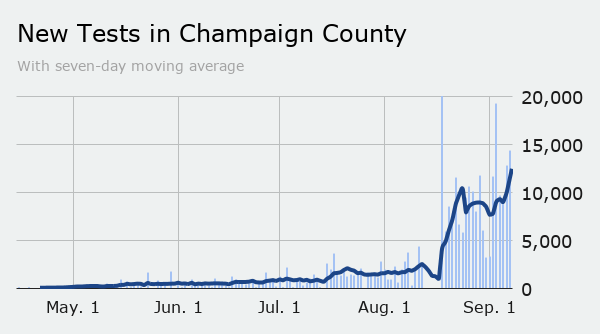 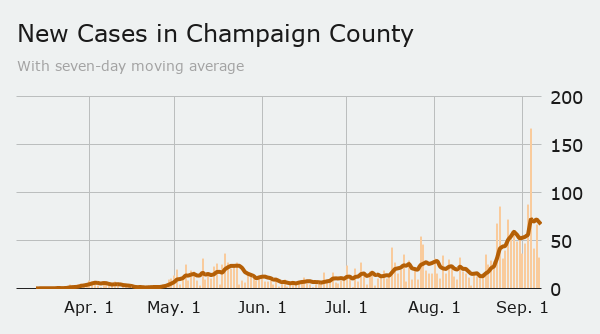 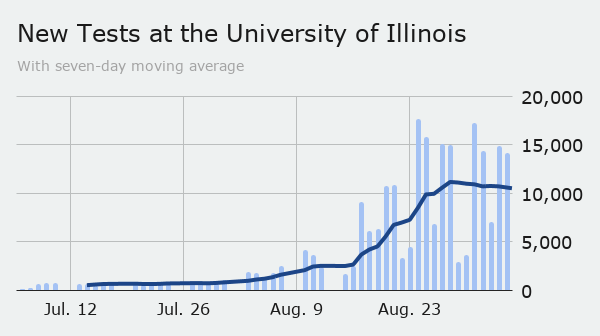 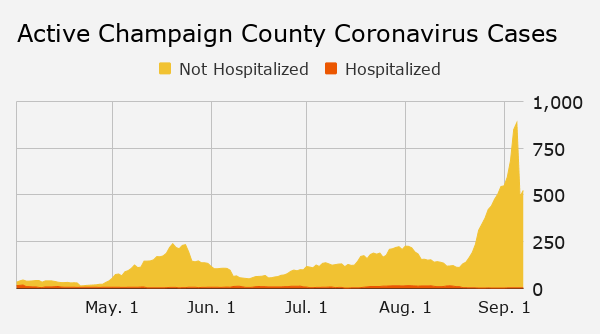 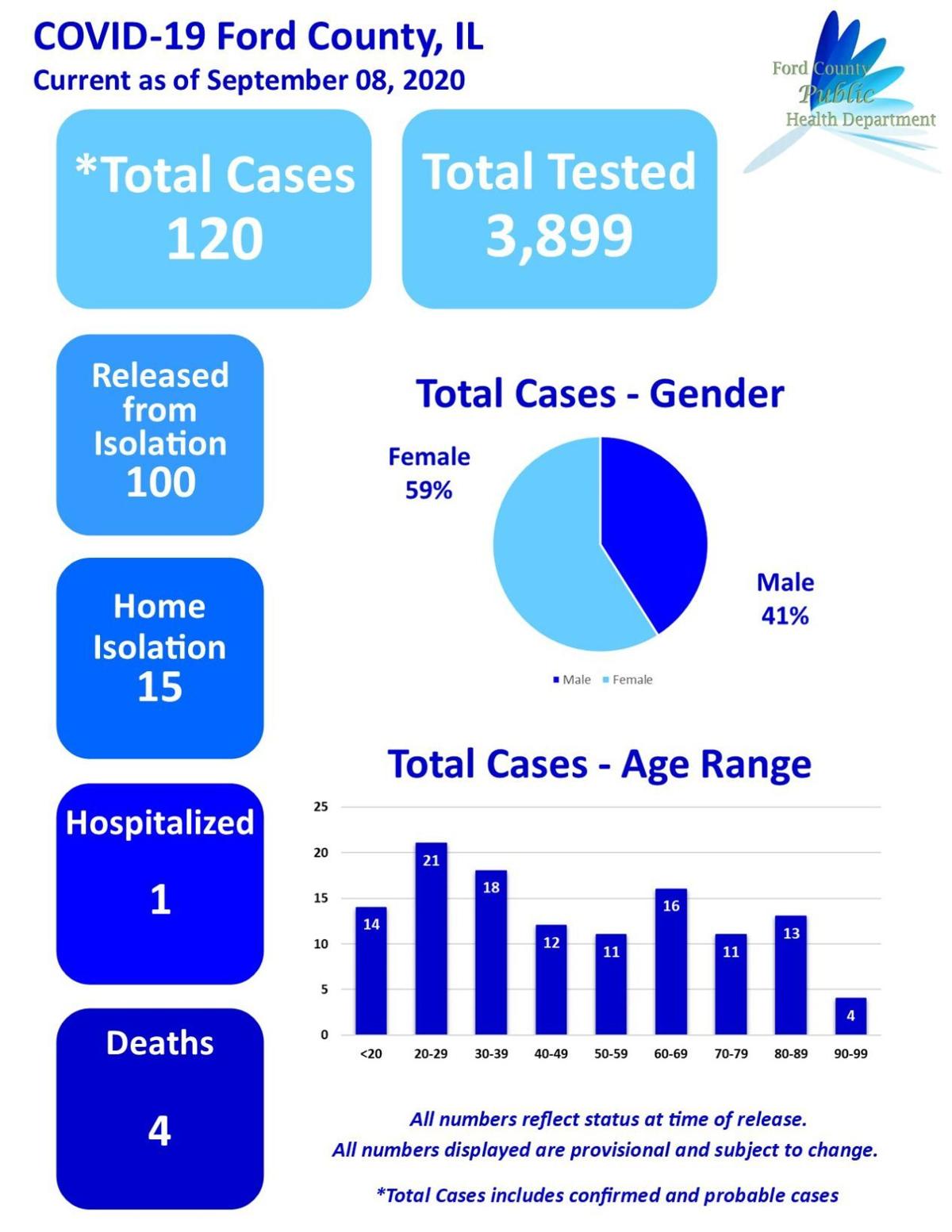 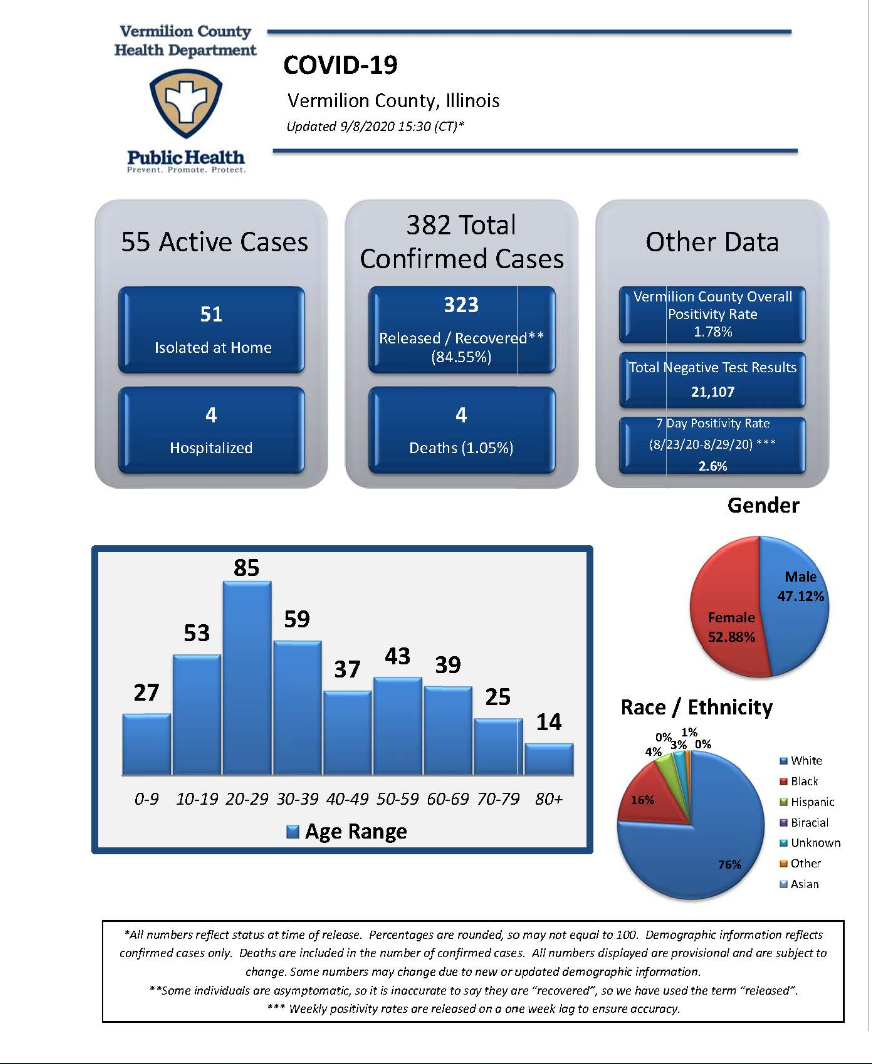 The number of confirmed COVID-19 cases in Vermilion County grew by 11 Tuesday, to 382.

The breakdown by age of the 11:

FORD COUNTY:Man in 80s is second fatality in a week

For the second time in a week, Ford County has lost a resident to the coronavirus.

On Tuesday afternoon, a Ford health official told The News-Gazette's Deb Pressey that the county's fourth fatality was a man in his 80s who was linked to the COVID-19 outbreak at Accolade Healthcare of Paxton on Pells.

That raises Ford's case total to 120. Of those, 100 have been released from isolation, 15 are isolating at home and one is hospitalized.

The number of hospitalized residents remained three for the fourth straight day in Champaign County, where the seven-day positivity rate stands at 0.6 percent.

Here’s an updated breakdown of confirmed county cases by age group, according to CUPHD data:

With three days’ worth of data still to be input, the number of unique COVID-19 cases on the University of Illinois campus since classes began on Aug. 24 stood at 1,242.

The dashboard is missing Labor Day weekend data for Saturday, Sunday and Monday.

Superintendent Brian Brooks said the student tested positive over the weekend. Brooks said that due to the timing of the positive test and the student’s original exposure, as well as the fact that students had not been in school since Thursday, the C-U Public Health District had no concerns about any further student or staff exposure at the school from this particular case.

Brooks said four students who were identified as having prolonged, close contact to the positive student have been placed in a 14-day quarantine to assist in preventing the further spread of COVID-19.

The positive student will also be quarantining for 14 days.

“Our parents have been outstanding in regards to understanding the protocols we have to take, and the Health Department has been very helpful and responsive,” Brooks said. “This was to be expected when you're dealing with a virus like this that spreads so easily, which is why it is very important to stick to the procedures that are in place and continue to stay in contact with the Health Department to stay up to speed on any changes that are made.”

COVID-19 cases have cropped up at schools across the area in recent weeks:

— Oakwood Grade School closed for three days — Aug. 31, Sept. 1-2 — after three positive cases were confirmed. The school reopened for in-person instruction on Sept. 3, with Superintendent Larry Maynard writing in a letter to families and staff: “According to the Vermilion County Department of Public Health, our quick responsiveness to the concern and our temporary closure of in-person instruction at Oakwood Grade School was a helpful precautionary measure of prevention that has successfully helped mitigate this situation.”

— On Sept. 6, Cerro Gordo officials announced that the high school classes was shifting to remote learning until at least Sept. 21 after seven people tested positive for COVID-19. Four were reported on Sept. 3-4, with another three on Sept. 5-6.

— On Sept. 4, families in the Mahomet-Seymour school district were informed that a Lincoln Trail Elementary teacher and Middletown Prairie Elementary student had tested positive, leading to 18 people being quarantined.

— On Sept. 3, Paxton-Buckley-Loda announced that a high school student tested positive. Superintendent Cliff McClure sent a similar note to families on Aug. 21, when a fourth-grader at Clara Peterson Elementary gave the district its first confirmed case.

— On Aug. 28, families and staff were notified of a student testing positive at Rantoul High.

A day later, it was revealed that two students at Rantoul’s J.W. Eater Junior High had tested positive but that no other students or staff were at risk from being in close contact with either case, according to Principal Scott Woods.

— After four students tested positive for COVID-19, Salt Fork High announced on Aug. 28 that it would switch from in-person classes to entirely remote learning for the next two weeks. The district hopes to resume in-person learning and athletics on Sept. 14, Superintendent Phil Cox said.

The state’s seven-day positivity rate fell from 4.2 to 4.0 percent.

During the course of the pandemic, 4,478,710 tests have produced 252,353 cases. According to IDPH, there have been 8,186 coronavirus-related deaths statewide.

No residents or staff at the Piatt County Nursing Home have tested positive for COVID-19 since an employee recorded a positive test on Aug. 26, reports Steve Hoffman, editor of Community Media Group's Piatt County Journal-Republican.

“We still have not had any positive results from any of our testing,” Nursing Home Administrator Scott Porter said Tuesday.

He said the case last month triggered weekly testing by the state. Results of the first round were all negative, and employees were being tested Tuesday for a second time.

“Overall, it would appear that, at least from exposure from that employee, there has not been transmission,” said Porter. He did warn that, with 300 being tested at the Monticello facility, there is a chance of false positives.

Porter also said the employee that tested positive in August has recovered and should be back at work later this week.

If the second round of weekly testing produces all negatives, the nursing home will likely revert back to monthly testing of employees and residents.