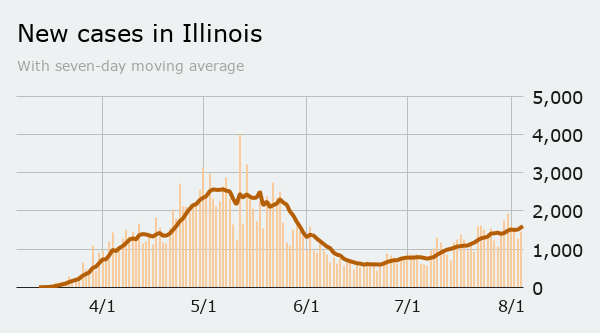 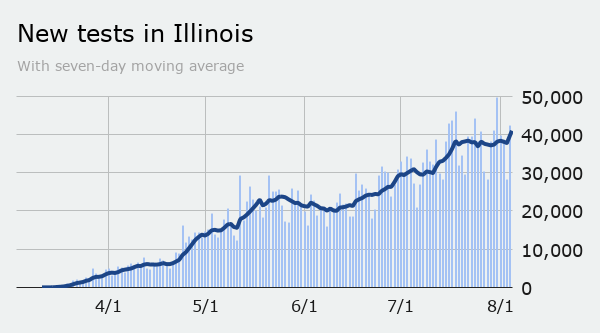 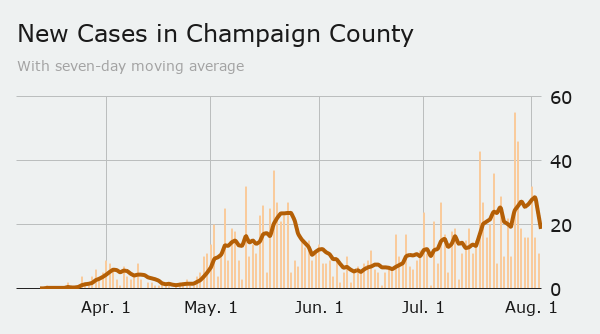 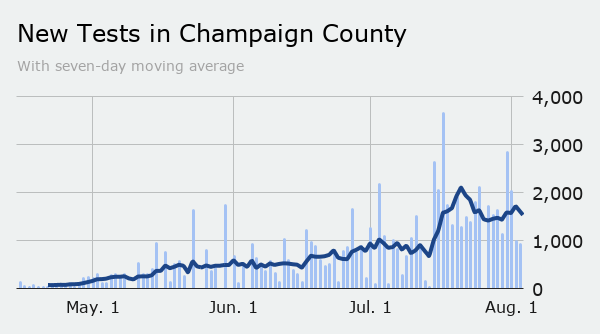 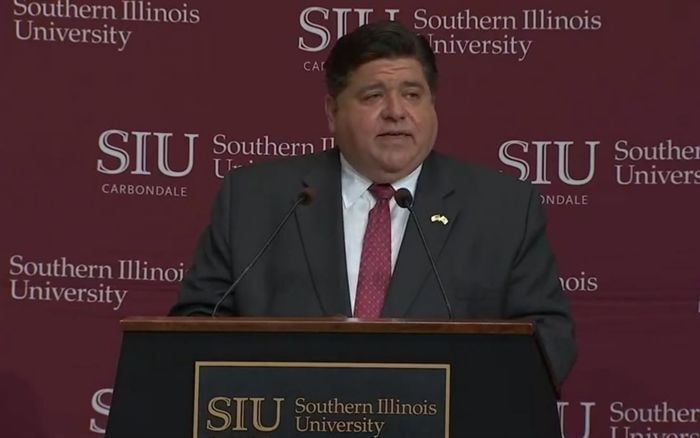 Gov. J.B. Pritzker speaks at Southern Illinois University in Carbondale Tuesday, warning that the region now has a greater COVID-19 outbreak than Chicago. 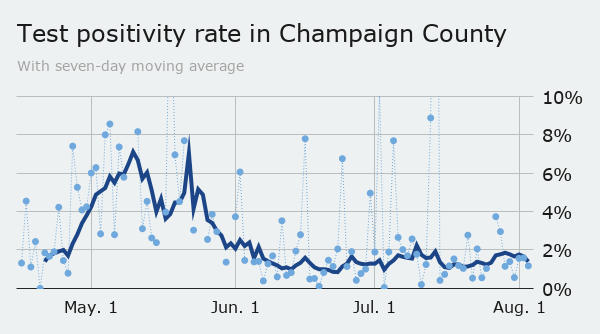 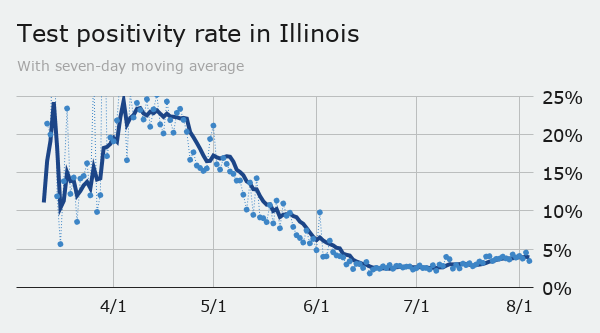 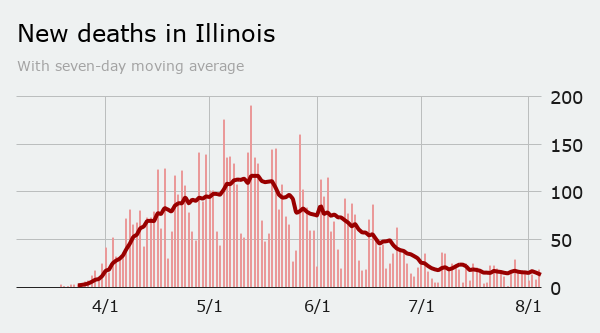 A woman in her 70s is the 105th Douglas County resident to test positive for COVID-19, the local health department reported early Tuesday evening.

Of the six, two involve residents who'd recently traveled out of state, public health Administrator Doug Toole said mid-afternoon Tuesday. Two are in their 40s, two in their 20s and two are teenagers.

How the cases break down by age group:

Of those, 42 are confirmed and 12 are classified by the county as probable.

The status of the 54 cases:

How the cases break down by age group:

Fourteen county residents are hospitalized with COVID-19, one fewer than than Monday.

Here’s a breakdown of confirmed Champaign County cases by age group, according to CUPHD data:

CARBONDALE: 'Large gatherings, and large unmasked gatherings in particular, are a no go,' Pritzker says at SIU

The coronavirus is worse in southern Illinois than it is in the Chicago area, and college parties thrown by returning students risk exacerbating the spread of COVID-19, Gov. J.B. Pritzker said at an appearance at Southern Illinois in Carbondale.

“I'm here today because the COVID-19 pandemic, which once seemed tame in Carbondale and throughout the entire region, is now surging here,” Pritzker said at the SIU student center. “It's worse than in Chicago, and I'll be frank, if we don't see some change here, the virus will cause some businesses to close and an increasing percentage of people to get sick, and some will even die.”

Pritzker said Jackson County, where Carbondale is located, is one of 11 counties in warning territory according to state metrics.

Southern Illinois’ Region 5 of the state’s COVID-19 mitigation plan had a test positivity rate of 7.3 percent as of Aug. 1, while the Region 4 Metro East area on the Missouri border had a rate of 7.2 percent. Those were pushing the 8-percent threshold which would initiate state action to mitigate the spread of the virus.

If a region hits the 8 percent positivity rate for three days, or if the positivity rate increases for seven of 10 days along with sustained seven-day increase in hospital admissions, it would also initiate mitigation efforts. Those include moving some sectors of the economy back to restrictions seen in previous phases of the state’s reopening plan.

Pritzker said it is important for local governments to take mitigation action as cases rise. He commended the Carbondale City Council for passing a face mask mandate that could allow for fines.

“I was very encouraged though, to see that just a few days ago the Carbondale City Council unanimously approved a city ordinance to enforce our statewide masked mandate, and that the county state's attorney is supporting the enforcement of mitigation at bars and restaurants,” Pritzker said.

The other regions range from 3.1 percent in eastern Illinois to 6.4 percent in Kankakee and Will Counties. Region 11, which includes all of Chicago, had a 4.9 percent positivity rate.

Pritzker warned that even though the virus has a 95 percent recovery rate for those 42 days removed from a positive diagnosis, according to the Illinois Department of Public Health, health effects can often be long lasting, even for those that were otherwise healthy.

“We also need all of our residents to take this seriously and to protect themselves,” he said. “No matter how young and invincible you might think you are, the largest increase in cases is occurring among young people in their 20s and below. This virus is dangerous no matter how young you are because of the long-term damage it can cause you.”

Pritzker noted that a 28-year-old underwent a double lung transplant at Northwestern University earlier this year due to complications of the virus.

“Yes, the odds are high that a young person won't die from COVID-19, but you don't want to be the reason that someone else does, and you don't want to live with the long-term consequences of COVID-19 either,” he said.

“Almost 70 percent of those new cases during this timeframe have been in young adults, those in their teens and late 20s,” Hagston said.

Some of the outbreaks in Jackson County originated at parties held by students coming back early for orientations and athletics, the governor said.

“I know that coming back to college is a celebratory time for so many young people, but I can't emphasize enough that we need everybody to do their part in the fight against this pandemic,” Pritzker said. “Large gatherings, and large unmasked gatherings in particular, are a no go.”

Danville’s 61832 ZIP code became the fifth in the area to hit triple-digit total cases, with Urbana’s 61801 one away from becoming No. 6.

Here’s an updated list of area ZIP codes with more than five total confirmed cases, according to data from the Illinois Department of Public Health and C-U Public Health District:

The number of confirmed cases in Piatt County grew by four, to 45, the local health department reported Tuesday.