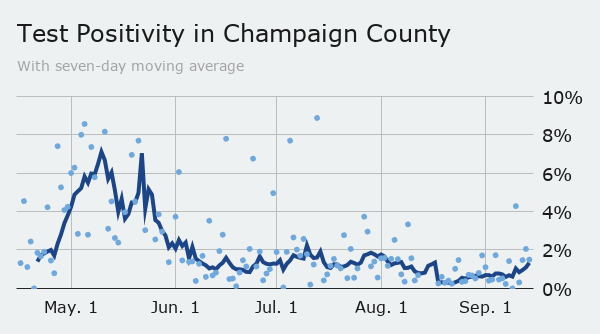 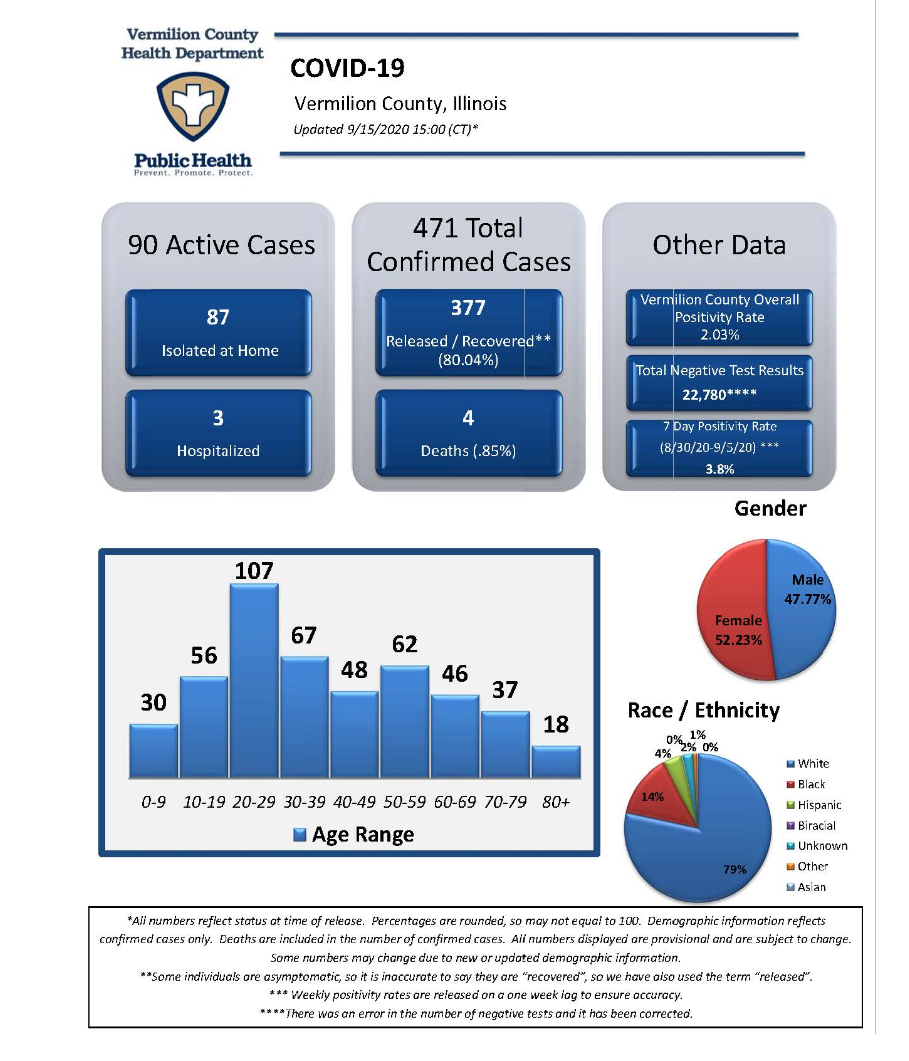 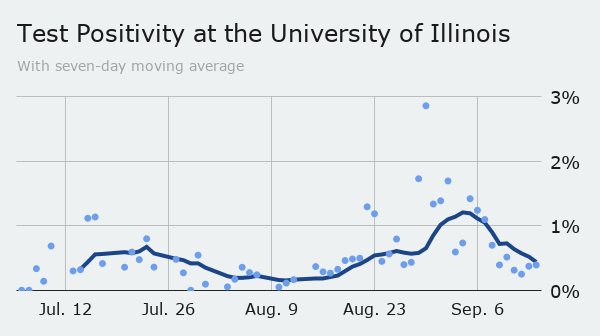 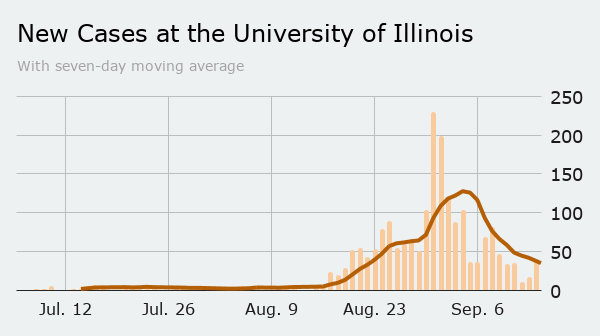 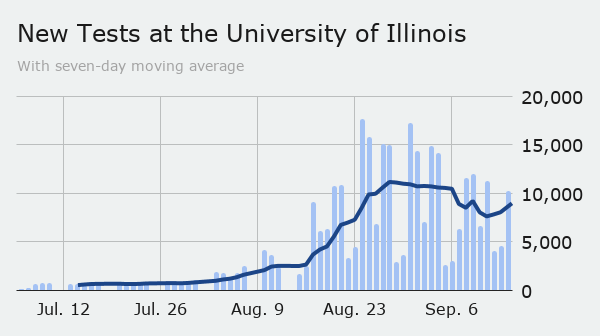 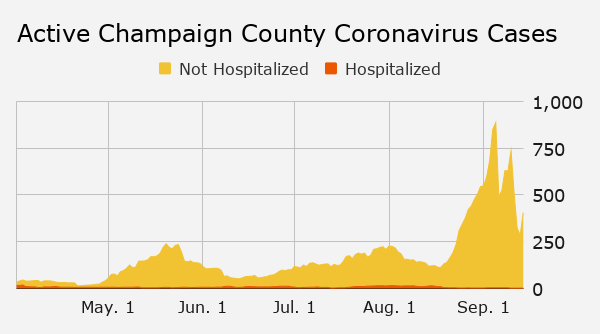 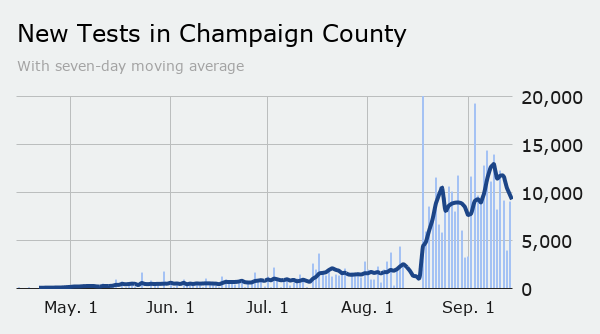 The seven-day positivity rate on campus fell for the fifth time in six days, to 0.4 percent.

It marked the sixth straight day that the daily rate was 0.5 percent or lower on campus.

DANVILLE PRISON: Eight confirmed cases among staff, none among inmates

An eighth staff member at the Danville Correctional Center has tested positive for COVID-19, according to data from the Illinois Department of Corrections.

Of the eight, only one is classified as recovered, according to IDOC. No inmates have tested positive at the Danville prison, records show.

State prisons have been among the hardest-hit facilities throughout the pandemic. The totals, according to IDOC:

— Inmates with confirmed cases: 1,356, with 893 of those now recovered. The most widespread outbreaks occurred in:

— Staff members with confirmed cases: 672, with 539 of those now recovered. The most widespread outbreaks occurred in:

After three straight days of triple-digit decreases, the number of cases classified as active in Champaign County rose by 121 Tuesday.

Of 9,088 newly processed tests, 136 came back positive, a rate of 1.5 percent. The county’s seven-day positivity rate now stands at 1.3 percent.

Recovered cases now outnumber active ones, 3,385 to 406, according to C-U Public Health data updated on Tuesday.

Hospitalizations (one) and the death toll (20) remained unchanged.

Over the course of the pandemic, 382,263 tests have now produced 3,811 confirmed cases in Champaign County.

Here’s an updated breakdown of confirmed county cases by age group, according to CUPHD data:

The breakdown by age of the new cases:

Vermilion, which was among 30 counties on put on IDPH’s coronavirus warning list on Friday, now has 471 confirmed cases.

Its seven-day positivity rate stands at 3.8 percent, its single-day rate at 2.03 percent.

Both the grade school and high school in St. Joseph have confirmed cases of COVID-19, N-G correspondent Nora Maberry-Daniels reports.

Families with students at St. Joseph Grade School and St. Joseph-Ogden High School were informed of the news in separate letters Tuesday.

The grade school case involves a student who “came down with symptoms over the weekend and has not been in school this week,” Superintendent Todd Pence wrote.

“Due to social distancing in our classrooms, the rest of the students in class will not have to be quarantined,” Pence added. “The remaining students in the classroom are being moved to an empty classroom until the current classroom is deep cleaned. We have identified a few students that were in close proximity to the student while on the school bus. We have contacted all of the parents of these students. These parents will also be contacted by CUPHD who will determine the length of their quarantine.”

For the second time in as many weeks, SJ-O Superintendent Brian Brooks also informed families, students and staff of a positive test from the weekend.

“We were notified late yesterday, and the student has not been in school since last week. This is not related to the previous student case,” Brooks wrote.

“We did have a few students who have been identified as having prolonged close contact to this particular COVID-19 case. Those students have been placed in a 14-day quarantine to assist in preventing further spread of COVID-19 within SJO. Those families have already been contacted.”

COVID-19 cases have cropped up at schools across the area in recent weeks:

— After recording four positive tests for COVID-19 last week, the Blue Ridge school district announced Friday it would shift to all-remote learning through at least Sept. 25.

— Oakwood Grade School closed for three days — Aug. 31, Sept. 1-2 — after three positive cases were confirmed. The school reopened for in-person instruction on Sept. 3, with Superintendent Larry Maynard writing in a letter to families and staff: “According to the Vermilion County Department of Public Health, our quick responsiveness to the concern and our temporary closure of in-person instruction at Oakwood Grade School was a helpful precautionary measure of prevention that has successfully helped mitigate this situation.”

— On Sept. 6, Cerro Gordo officials announced that the high school classes was shifting to remote learning until at least Sept. 21 after seven people tested positive for COVID-19. Four were reported on Sept. 3-4, with another three on Sept. 5-6.

— On Sept. 4, families in the Mahomet-Seymour school district were informed that a Lincoln Trail Elementary teacher and Middletown Prairie Elementary student had tested positive, leading to 18 people being quarantined.

— On Sept. 3, Paxton-Buckley-Loda announced that a high school student tested positive. Superintendent Cliff McClure sent a similar note to families on Aug. 21, when a fourth-grader at Clara Peterson Elementary gave the district its first confirmed case.

— On Aug. 28, families and staff were notified of a student testing positive at Rantoul High.

A day later, it was revealed that two students at Rantoul’s J.W. Eater Junior High had tested positive but that no other students or staff were at risk from being in close contact with either case, according to Principal Scott Woods.