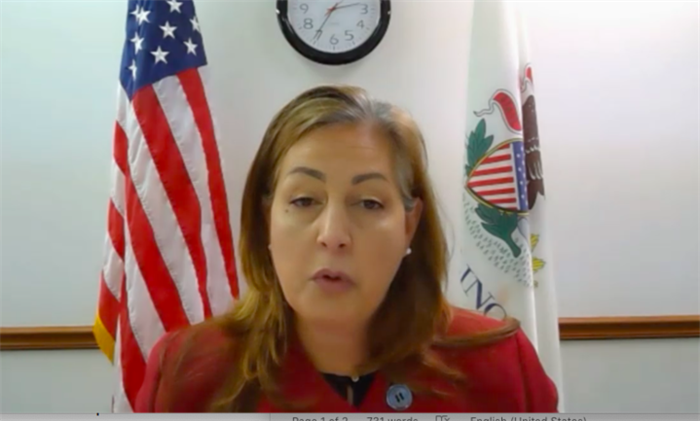 On Friday, Gov. J.B. Pritzker said he would not have appointed Linda Chapa LaVia, above, as director of the Illinois Department of Veterans’ Affairs if he had known then what he knows now about her handling of a COVID-19 outbreak at a state-run veterans home. 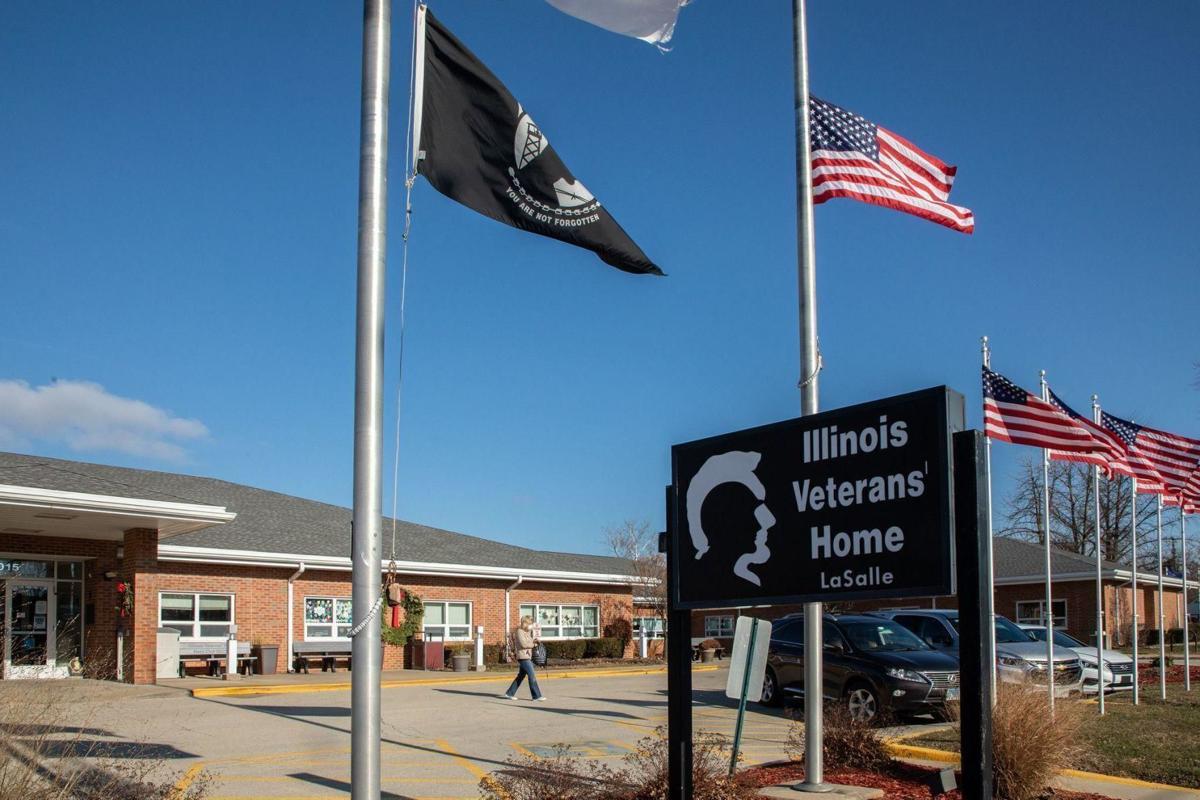 SPRINGFIELD — A state watchdog report into the deadly COVID-19 outbreak at the Illinois Veterans’ Home in La- Salle found multiple failures that contributed to 36 veterans deaths, stemming primarily from the home’s complete lack of infection prevention plans or policies.

The report also found deficiencies in communication and training at the LaSalle home, as well as repeated lack of compliance with personal-protective-equipment protocols. 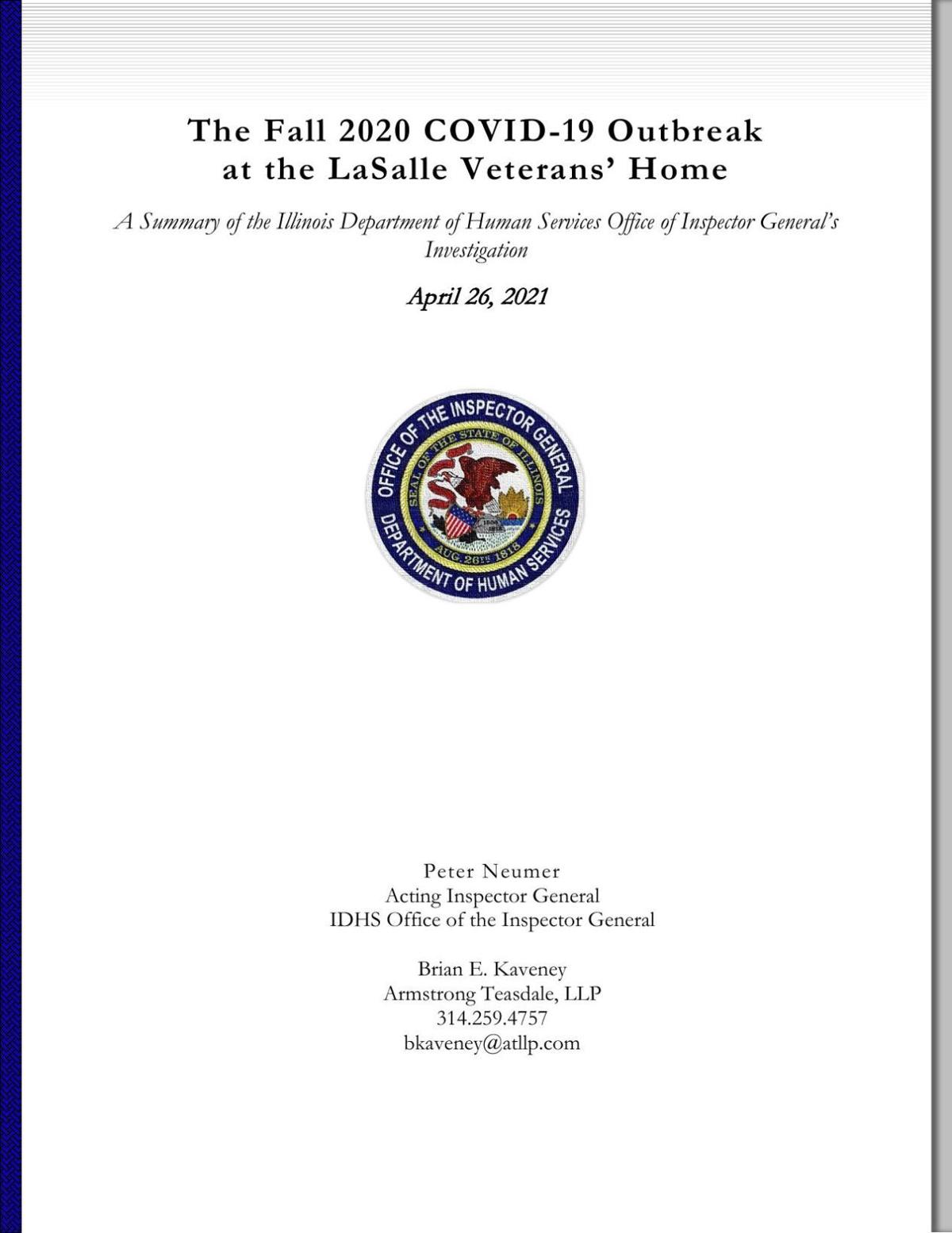 The LaSalle home, one of four state-run veterans homes, had no documented COVID-19 policies or outbreak plan, despite the well-known risks of coronavirus transmission in places like long-term-care facilities, according to the report from the Illinois Department of Human Services’ Office of the Inspector General.

The 50-page report depicts a facility that was woefully unprepared to handle an infection outbreak, leading to a chaotic and uninformed outbreak response that was exacerbated by disorganized leadership at the department and the home.

The investigation included analyzing COVID- 19 data, trends and protocols in the LaSalle home and assessing the Illinois Department of Vetrans’ Affairs’ preparation, response and compliance with protocols and regulations. It also included 29 individual interviews and the review of hundreds of documents.

“No one at IDVA was specifically tasked with monitoring changes in (U.S. Centers for Disease Control and Prevention) recommendations or analyzing the responses of other nursing homes with COVID-19 outbreaks,” the report states. “At a time of crisis, no one at IDVA was taking ownership of the situation, let alone teaching, supervising, or inspiring employees across the homes.”

The watchdog report comes after the outbreak at LaSalle that killed about one-quarter of the home’s population. Chapa LaVia called for the inspector general to begin an investigation Nov. 24, when the home had reported 27 veteran deaths.

Since then, both Melbrech and Chapa LaVia have vacated their positions. An IDVA spokesperson said Friday that Kolbeck had resigned from the department as well.

Gov. J.B. Pritzker, who appointed Chapa LaVia in 2019, said he did so because of her role in investigating the deadly outbreak of Legionnaires’ disease at the Quincy Veterans’ Home.

“She seemed like an ideal person to be able to root out the problems in our veterans homes. But I have to admit that, if I knew then what I know now, I would not have hired her,” Pritzker said Friday at an unrelated news conference.

House Minority Leader Jim Durkin of Western Springs said he believes there may be a basis for criminal charges stemming from the response to this deadly outbreak.

“I will not accept anything less than another set of eyes to look at the facts of this case to determine whether or not any section of the criminal code was violated,” Durkin said Friday at a virtual news conference.

Sen. Sue Rezin, R-Morris, whose district includes the LaSalle home, said she has called on the auditor general to conduct a separate investigation — as it did in the aftermath of the Quincy outbreak during former Gov. Bruce Rauner’s administration.

IDVA “had an entire year before the COVID outbreak to implement these recommendations,” Rezin told Capitol News Illinois. “Had they done that, we would have averted a huge loss of life.”

The inspector general’s report outlines seven major failures within the LaSalle home that contributed to the outbreak.

It further states that the LaSalle home did not fill its senior home administrator role, a position which is tasked with overseeing day-to-day operations, serving as a primary IDVA contact and working toward standardizing policies and procedures. That position has been vacant since 2019.

The following summarizes in greater detail some of the reported failures that took place within the home.

The home’s lack of a comprehensive COVID-19 plan, which includes any operating protocols in the event of an outbreak, was reported as a significant contributing factor to the failure to contain the virus at the LaSalle home.

This led to confusion among staff at the facility, and contributed to an “inefficient, reactive and chaotic” response to the outbreak, according to the report.

The lack of preparedness was evident in the movement of veterans to different areas of the home before and during the outbreak, the report states, and resulted in cross-contamination of positive and negative veterans.

For example, the home decided a month before the outbreak to relocate 10 of the 20 veterans housed in the future quarantine unit into a different area of the home. The relocation stopped in early October, leaving 10 veterans living in the future quarantine unit. When the outbreak happened weeks later, those veterans were relocated, “again causing avoidable movement and interaction amongst positive and negative Veterans,” the report states.

“The home’s decision to leave half of the veterans regularly housed in the future quarantine hall demonstrates the lack of foresight that contributed to the prolonged outbreak in the home,” according to the report

Several nurses interviewed for the report said that the first positive COVID-19 tests came after the LaSalle home changed its quarantine policy. Initially, at the beginning of the outbreak, the home required all veterans who left the home for any reason to quarantine for 14 days upon return.

At some point, veterans returning from a local hospital, St. Margaret’s Hospital, no longer were required to quarantine because it was determined that these visits were “low-risk.”

The report states that active instruction and in-service training were not a priority for the leadership team at the LaSalle facility.

For example, initially during the outbreak, staff at the home were not required to change PPE, such as gloves and gowns, after exiting a veteran’s room.

“The obvious risks associated with unchanged PPE and interacting with colleagues in any portion of the Home without a mask were either not appreciated by leadership or not properly conveyed to or enforced with the staff,” the report states.

The report found that lack of proper training was evident by the management team’s failure to create “a workplace culture that valued safety and personal responsibility.”

This culture, according to the report, was due in part to the management team’s failure to create a COVID-19 committee or task force to address infection prevention education, training for PPE, and other compliance issues.

'I wouldn't say we're at the level of probable cause, but it certainly does warrant further investigation on whether or not criminal negligence did take place,' said House Minority Leader Jim Durkin of Western Springs.