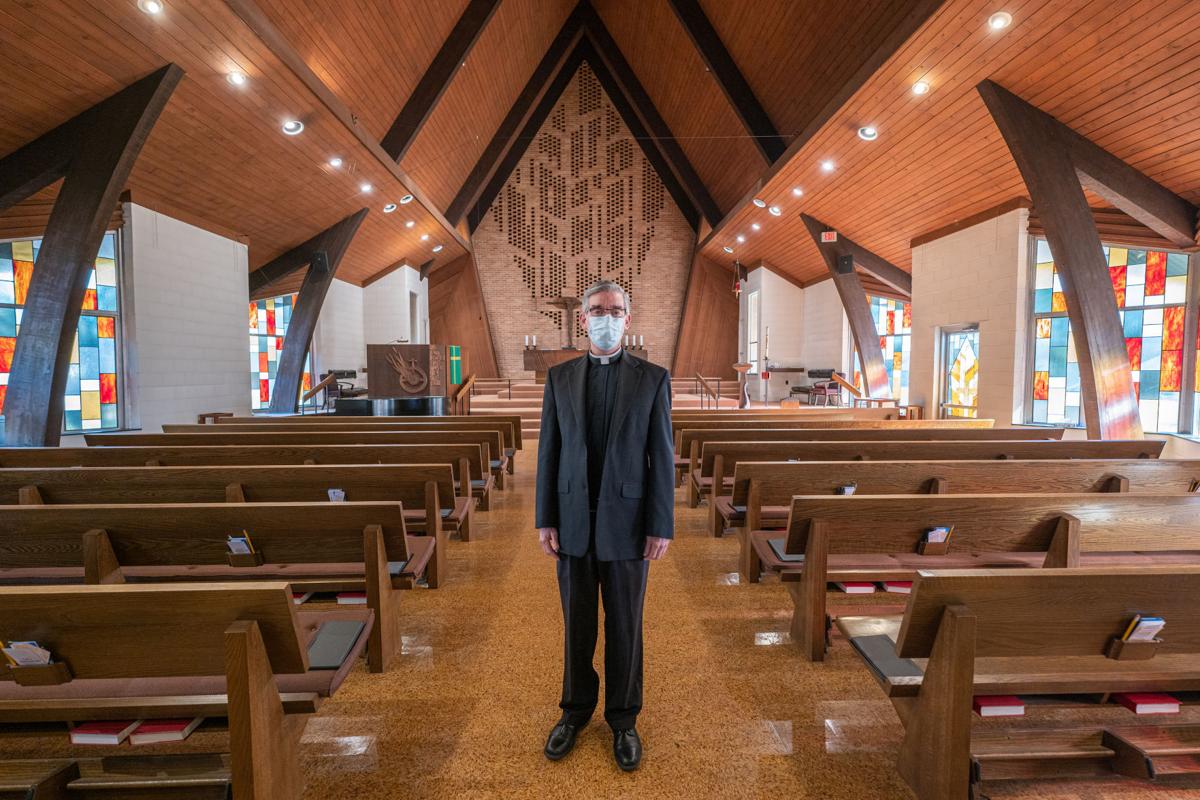 Grace Lutheran Church Pastor Chris Repp stands in the empty sanctuary where he preaches every Sunday in west Champaign. 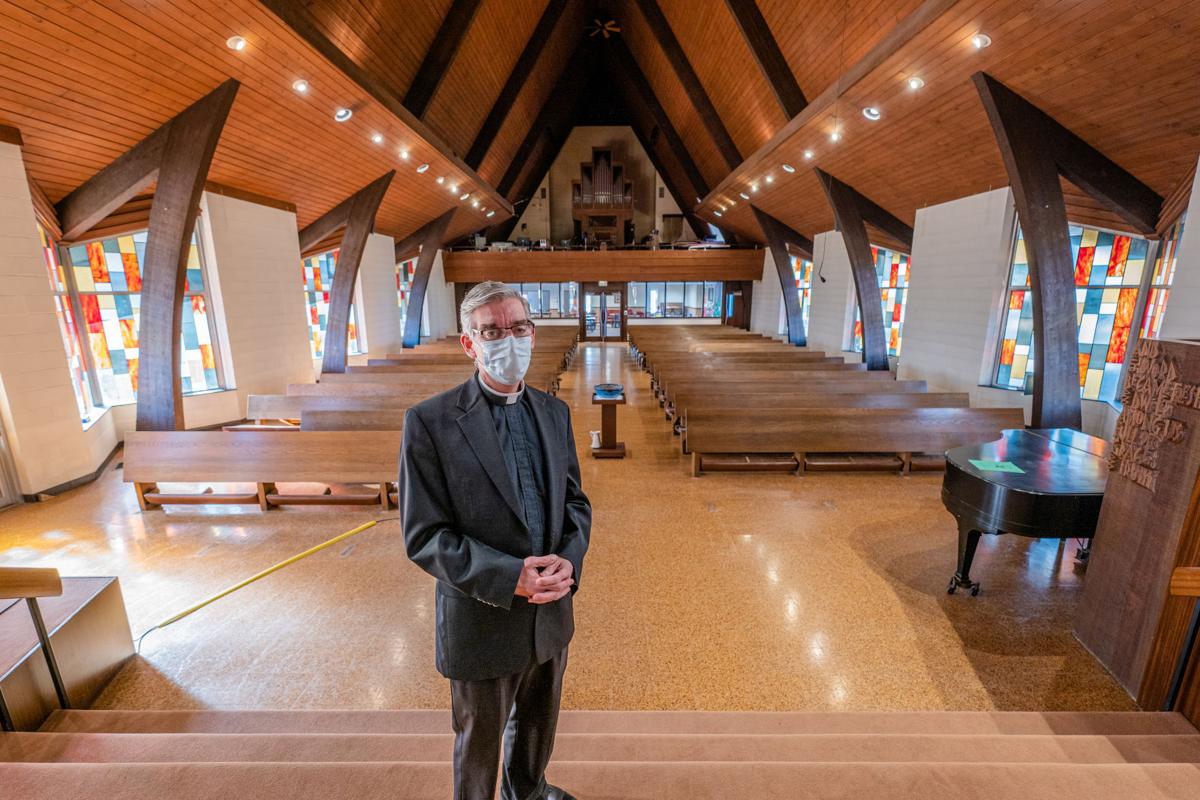 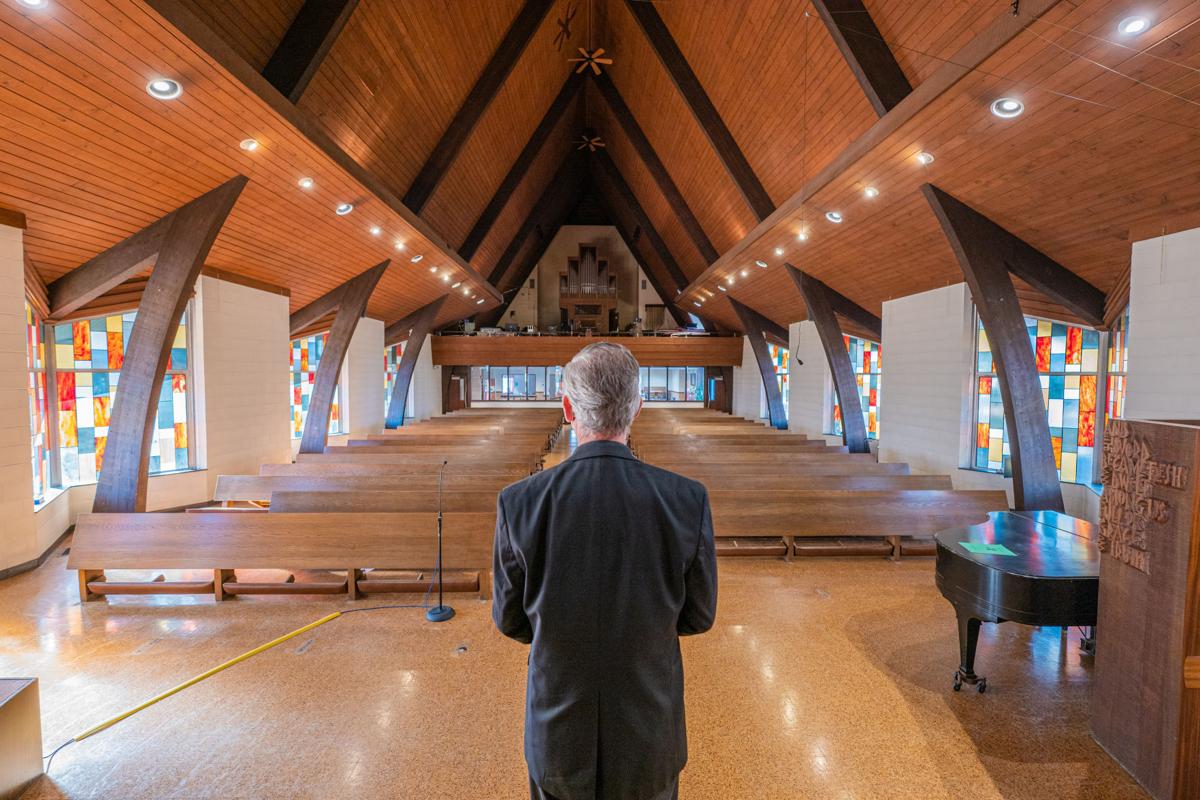 Grace Lutheran Church Pastor Chris Repp stands in the empty sanctuary where he preaches every Sunday in west Champaign.

Traditionally, the Mennonite church doesn’t use instruments, so singing became integral to services.

This year, First Mennonite Church of Champaign-Urbana church has had to break from that tradition because of the risk of transmitting COVID-19.

They’ve broken from the ways of the past, using keyboards and drums at the small prayer services they’ve been able to have, but nothing quite replaces the human voice, especially with the Christmas season approaching.

“I’ve had a lot of people say, ‘We miss singing so much,’” Deb Sutter said.

So Sutter and others at her church began to brainstorm, and they came up with a plan.

On Nov. 29, members of the congregation will gather around a small pond in the Yankee Ridge neighborhood to sing Christmas hymns from a safe distance.

“Around a pond, we’ll be so far apart from one another and we won’t be spreading germs,” Sutter said, “but the water can help us with the sound.”

With COVID-19 cases skyrocketing across the state and country, many churches in the area are going back to exclusively remote services, if they ever returned to in-person service at all. With Advent just two weeks away, the holiday season will be decidedly different, leaving leaders to find ways for their congregations to observe Christmas safely.

For First Mennonite, that means singing around a pond and decorating a tree outdoors, one family at a time.

For Bethel AME Church, it means focusing on how to give more to those in need. Pastor Terrance Thomas said the church is participating in Angel Trees around the community, which allow anonymous donors to contribute toward Christmas gifts for families in need.

Thomas is one of seven local preachers who will preach during a large online Advent service that will double as a fundraiser for organizations of the pastors’ choosing.

Bethel usually hosts a Watch Night Service on New Year’s Eve, and Thomas said his church will do its best to do so again this year. This time, it will be a pre-recorded remote service.

“This is the first time in many people’s lives that we won’t be able to come together in fellowship and hear each others’ words and hear the Christmas hymns and the Christmas songs, the combination of the choirs,” Thomas said. “The church plays with the children, learning about the meaning of Christmas. Things that we usually associate with Christmas are gone as we understand it. ... We’re trying to create a sense of familiarity in the midst of this.”

Every year at New Covenant Fellowship in downtown Champaign, Pastor Renée Antrosio and her congregation come up with a theme. This year, she’s trying to use that theme to help guide people through a dark winter.

“Our theme this year is, ‘Keep your lamps trimmed and burning,’” Antrosio said. “This idea of, ‘You know, the night is long, the journey is long, and what sort of fills our lamps with oil?’ How are we in it for the long haul, because none of the things that are happening right now are going to be over really soon, so what keeps our lamps burning and how do we fuel ourselves?”

New Covenant is going back to fully remote services after hosting a socially distanced in-person service for a small number of people, which began in September.

While they haven’t been using the full capacity of their building themselves, the church has allowed Austin’s Place and C-U at Home to host their women’s shelter while C-U at Home finishes the renovation process of what will be a new women’s shelter at its Phoenix Drop-In Center on the northern edge of downtown.

Moving services completely online hasn’t been completely negative. It’s allowed former members who have moved away to return to the church virtually. While 50 to 75 people attend church weekly in normal times, around 500 watch the virtual services, Antrosio said.

“There’s oddly no difference being in Texas and being in Urbana with how you access the service,” Antrosio said. “So actually, one of the things that’s great is that we’ve been able to have people who are in South Africa, and we’ve had people who are in Spain, people all over the world.”

Like it has throughout the pandemic, Grace Lutheran Church of Champaign will pre- record part of its services during the Advent season. That will include families lighting their own Advent wreaths at home each week while it’s lit in the church.

While Pastor Chris Repp said he doesn’t have Christmas Eve service planned, he’s confident they can pull off a live-streamed service like the church has for the last eight months.

“It’s almost like the story of the Grinch,” Repp said. “You can’t steal Christmas, even if you steal a lot of the trappings. It’s still the essential festival of the Christian church year, so we will celebrate as best we can. We’ll worship together, even though we’ll be in our separate homes and we’ll recognize this as an important part of the year and an important happening in the salvation history of the world and in our own lives. That doesn’t change, it’s just how we do it.”

Churchgoers won’t be flocking to service at midnight on Christmas Eve, but to Thomas, it’s important that the day will be just as meaningful as always.

“On the one hand, there’s a sense of sadness that we didn’t do what we needed to do as a nation and we got to the point where we can’t celebrate one of our high holidays together,” Thomas said. “But at the same time, we preach that God’s power, God’s love is not limited to physical proximity.

“We’re trying to figure out how to recreate those spaces.”