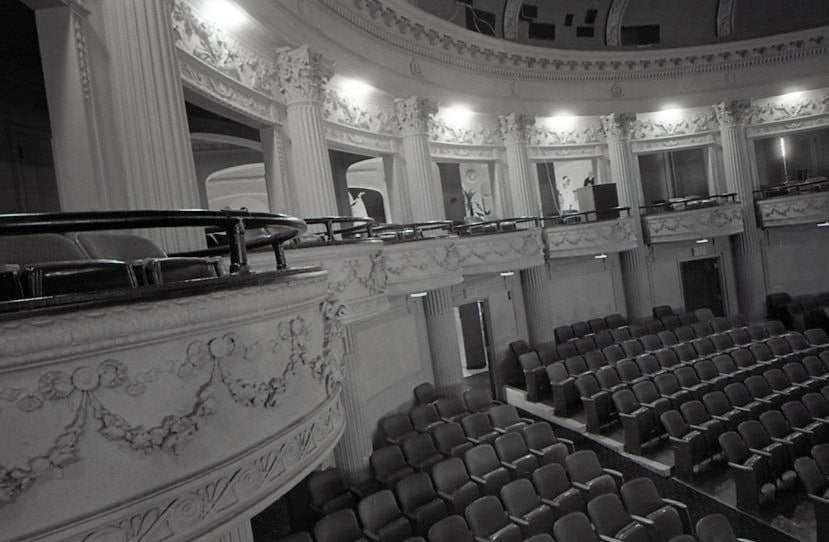 A 1977 view of the rear of the Orpheum Theatre auditorium shows its Corinthian columns and loge boxes.

A 1977 view of the rear of the Orpheum Theatre auditorium shows its Corinthian columns and loge boxes.

The Orpheum Theatre opened on Oct. 19, 1914, taking over from the venerable Walker Opera House as the new local home of Vaudeville. Provisions had been made for showing moving pictures due to their rapidly increasing popularity. In fact, a film had been shown following the Vaudeville acts since opening night.

Rapp and Rapp, the architects chosen to design Champaign’s Orpheum, grew up in Carbondale and attended Southern Illinois University. Cornelius Ward Rapp was the senior partner. His younger brother, George Leslie Rapp, earned an architecture degree from the University of Illinois in 1899. Having designed over 400 theaters, they were one of the elite theater architectural firms in the United States.

Rapp and Rapp designed the Orpheum’s interior as a scale model of the opera house at Versailles and exterior in Classical Revival style. The best-known features of are the towering Corinthian columns and the loge boxes surrounding the auditorium.

Industry trends of moving from single-screen houses to multiplexes led Kerasotes Theatres to close the Orpheum with the last screening of “April Fool’s Day” on April 3, 1986.

The beginnings of the Orpheum Children’s Science Museum date to an August 1989 meeting called by the Preservation and Conservation Association upon learning the city of Champaign had plans to raze the Orpheum for a parking lot. It was determined that returning the building to use as a theater at that time might not be practicable, but as the community was lacking a children’s museum, it would be a great place to get one established.

The museum incorporated in 1992, buying the building and going full swing into planning, publicity and fundraising. Months of renovations to the building, including hundreds of hours of volunteer labor, and exhibit planning and construction culminated in the grand opening of the new children’s science museum in the storefront spaces on Dec. 27, 1994.

The museum expanded into the theater entrance lobby, grand foyer and mezzanine in 2000. Major financing was provided by an Illinois First grant for the remodeling and a similar grant from the United States Geological Survey for a suite of new exhibits called Waterworks.

A renovation project in the auditorium was completed in October 2009. Principal work consisted of major plaster restoration and a multicolor paint scheme reminiscent of the original colors. This work was funded by a $250,000 grant administered by the National Park Service with a substantial amount of the required matching funds coming from the estate of Bruce C. Creamer.

The museum has proven there is a place for a children’s museum in the community. Unfortunately, financial issues exacerbated by the coronavirus pandemic resulted in the museum board’s announcement that it would not reopen.

This does not necessarily mean that the building, museum or both could not reopen in some form. The building found new life once before after being shuttered for several years and can do it again, and so can a children’s museum.

Perry C. Morris is an emeritus board member of the Orpheum Children’s Science Museum. He shares his local research at CUTheaterHistory.com and can be reached at orpheumhistory@gmail.com.