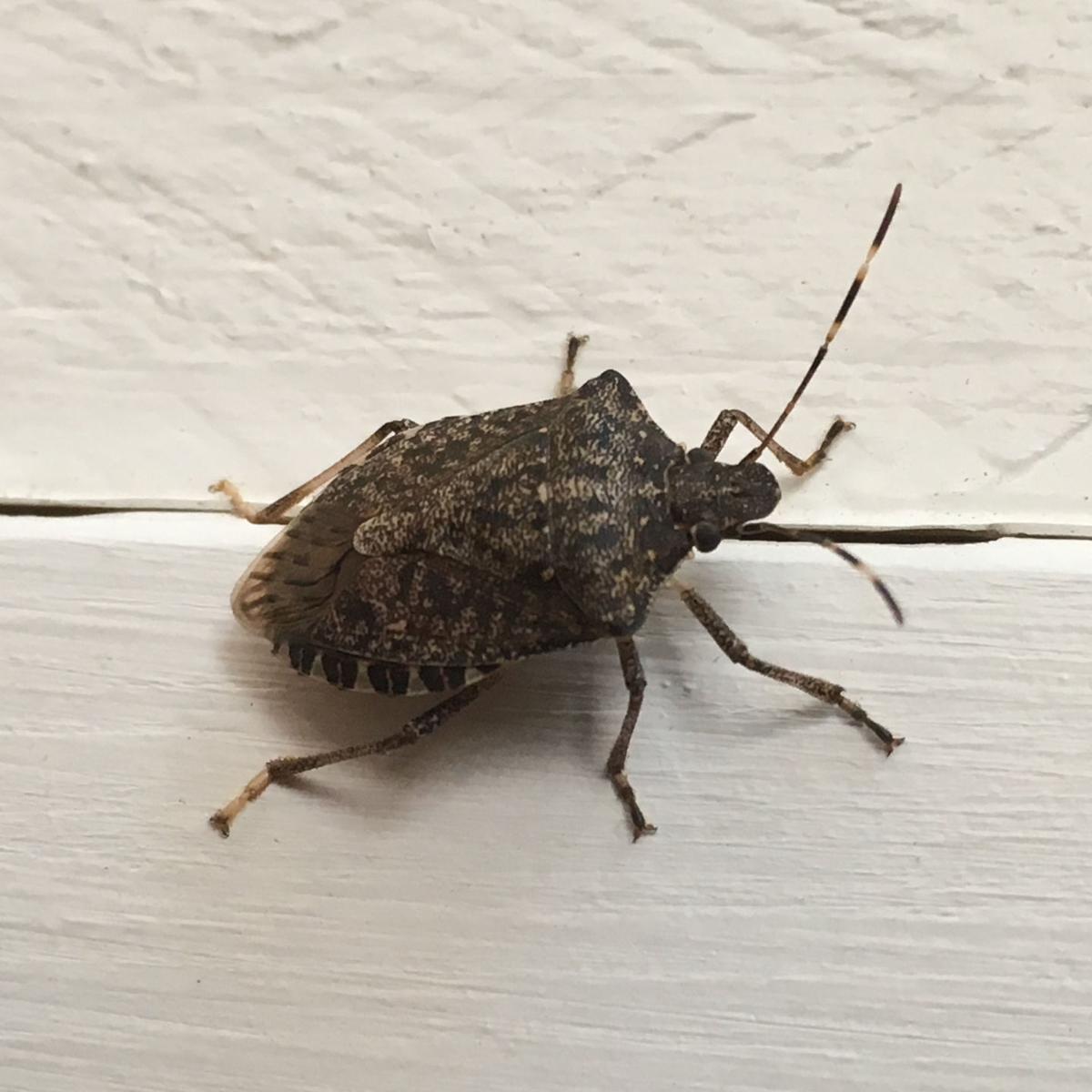 The brown marmorated stink bug is an increasingly detrimental pest on wide range of agricultural crops that commonly seeks shelter in our homes over winter. 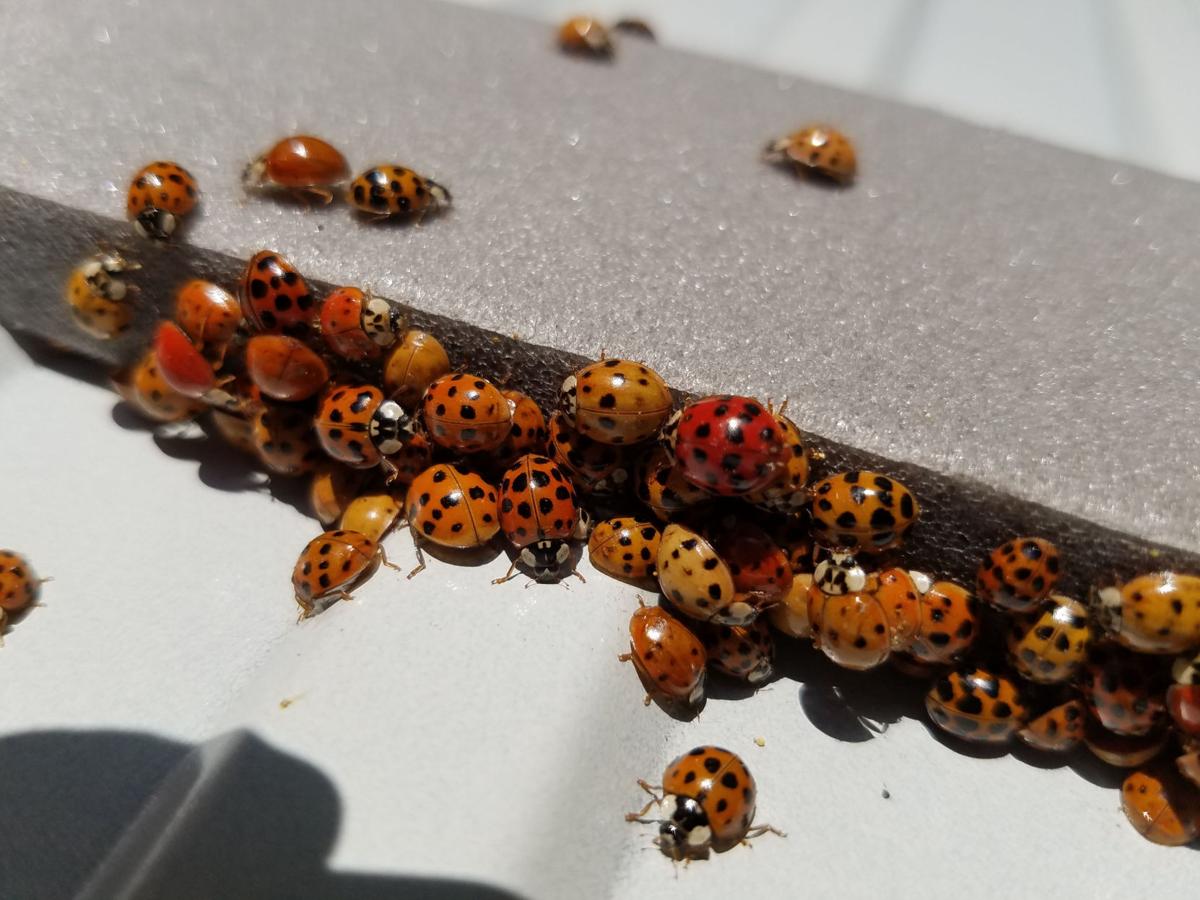 LEFT: The Asian lady beetle can be seen congregating around windows and doors on warm fall days as they seek overwintering refuge in our homes. RIGHT: The brown marmorated stink bug is an increasingly detrimental pest on wide range of agricultural crops that commonly seeks shelter in our homes over winter.

The brown marmorated stink bug is an increasingly detrimental pest on wide range of agricultural crops that commonly seeks shelter in our homes over winter.

LEFT: The Asian lady beetle can be seen congregating around windows and doors on warm fall days as they seek overwintering refuge in our homes. RIGHT: The brown marmorated stink bug is an increasingly detrimental pest on wide range of agricultural crops that commonly seeks shelter in our homes over winter.

Insects are a celebrated part of our natural ecosystems, but when they enter our homes, it’s rarely anything to celebrate.

Each fall, as cold weather closes in, a few usual suspects surface at my house to cause a hubbub. However, these guests are rarely a serious issue, simply existing as annoying roommates that congregate around light fixtures and windows.

Home-invading insects that show up en masse are not typically native species. With the exception of our native box elder bug (Boisea trivittata), which also invades indoor spaces, most of these intruders were introduced to the U.S. from another continent. Many times these introductions were accidental, but in some cases they were intentional.

Each year in my home, the two most populous indoor insects we notice in winter are the Asian lady beetle (Harmonia axyridi) and the brown marmorated stink bug (Halyomorpha halys). Each has a different story of introduction to our continent, but both have rapidly occupied states from coast to coast.

The brown marmorated stink bug was first detected in Pennsylvania in 2001, although it is believed to have already been established, but just not reported prior. This species looks similar to many of our native stink bugs, with the characteristic shield-shaped appearance.

As cool weather sets in, brown marmorated stink bugs often seek out human structures for overwintering. This propensity for human-built items has contributed to their rapid spread.

The insect winds up in many homes but also occupies vehicles, campers, boats and other large, mobile human-built objects. As a result, many unknowing human chauffeurs have aided in its conquest toward the West Coast, with 42 states now reporting this pest.

This insect has a wide range, feeding on everything from vegetables and fruits to row crops such as corn and soybeans. The mid-Atlantic region, which is the epicenter of its introduction, has suffered heavy economic losses from this pest in recent years since it does feed on so many important human crops.

In Illinois, it is becoming a greater problem and is only expected to increase in the future.

However, in our homes, this insect is no serious problem, but rather more of a nuisance with its looming presence and stinky smell when disturbed. Thankfully, it does not cause humans any harm and doesn’t feed, reproduce or perform any other life processes during winter.

The only reason we see it active is because the warmth of our home confuses this insect, delaying its normal inactivity during winter.

The Asian lady beetle has an entirely different story associated with its introduction but also has strong ties to the U.S. agricultural system. Surprisingly, this pest to homeowners actually assists with control of other pests, such as aphids and scale, which affect both agricultural crops and the home garden.

Its introduction is shrouded in mystery, as many attempts to establish this pest predator were attempted, dating back to the early 20th century. However, it wasn’t until the 1980s that an established population arose in southern Louisiana. It now occupies nearly every state in the continental U.S.

Like the stinkbug, this indoor pest is looking for a warm overwintering location, and while it is quite annoying, it carries little risk to human health. They do have the ability to pinch or bite, which can get your attention but rarely causes harm.

When disturbed, they do exude a smelly substance as a defense mechanism. Although it’s an unforgettable smell, it’s relatively harmless for most. Some have reported allergic reactions, likely from the smelly fluid they release, which poses the most serious human threat.

With both of these pests, the best control method is exclusion by sealing up spaces around windows, doorways and soffits. However, that can be challenging, since they have the uncanny ability to squeeze through the tiniest of cracks. If they do make it inside, I found a hand-held vacuum to be the simplest method of control.

While these unwanted guests may occupy our homes in the colder months, take solace in the fact that warmer weather will effectively evict them and give you a chance to seal up your home before next year.

Ryan Pankau is a horticulture educator with the UI Extension, serving Champaign, Ford, Iroquois and Vermilion counties. This column also appears on his ‘Garden Scoop’ blog at go.illinois.edu/GardenScoopBlog.