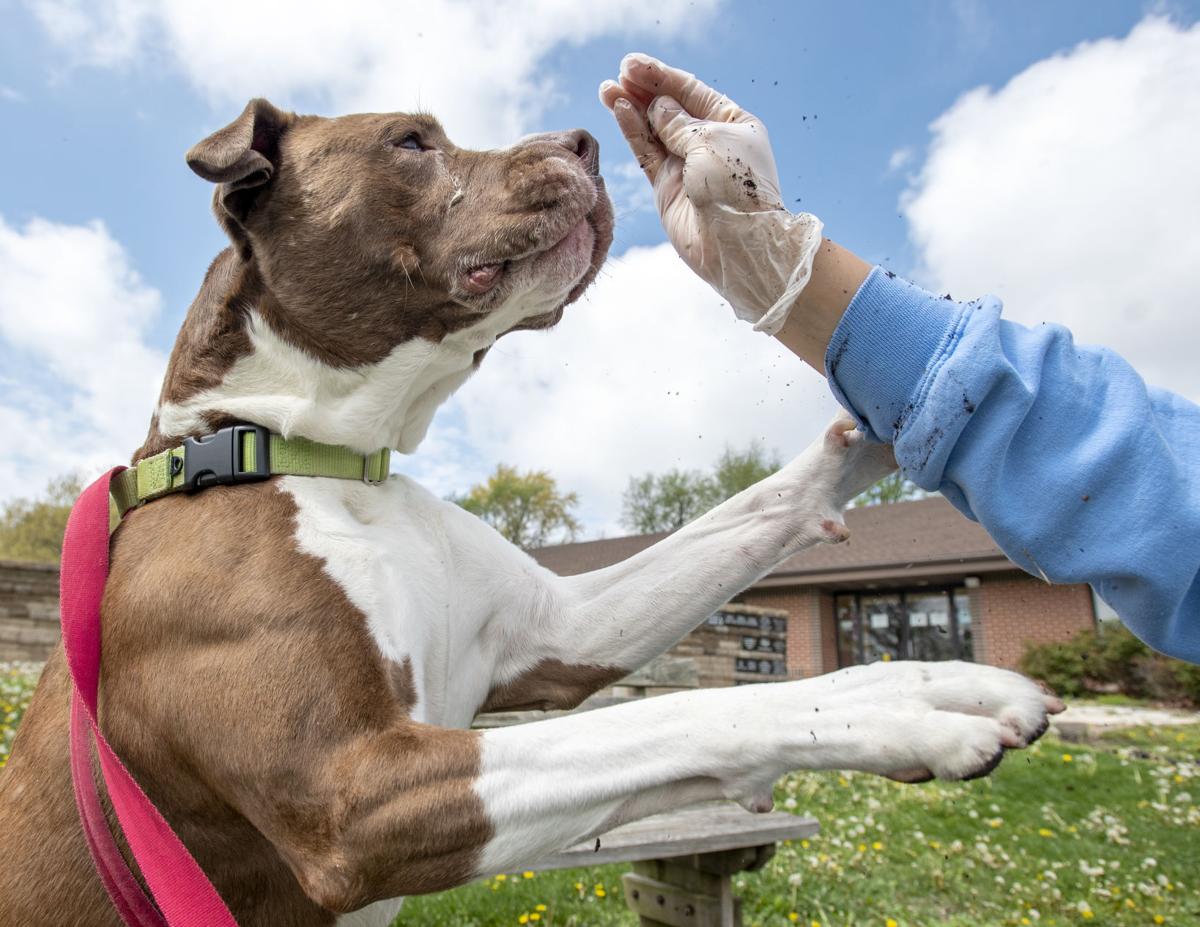 Miss Sadie, 8, the Champaign County Humane Society’s longest resident at 3 months and three days, spends some time outside with Humane Educator and Humane Investigator April Faulkner at the CCHS in Urbana on Thursday, April 29, 2021.

A rendering shows the view from the front of the Champaign County Humane Society’s planned new campus at 4003 Kearns Drive, Champaign. Provided

URBANA — The Champaign County Humane Society has scrapped its plans to remodel and add space at its current Urbana facility and will instead be moving to a new site in west Champaign.

The new campus will be on about 2 acres the organization recently purchased for $900,000 at 4003 Kearns Drive, C, southeast of the intersection of Springfield Avenue and Staley Road.

The upcoming move is a year or more down the road, with demolition set to start soon at the new location and remodeling there expected to take 12 to 18 months, according to Executive Director Mary Tiefenbrunn.

The Kearns Drive property comes with two existing buildings, meaning the humane society can remodel them rather than having to build from scratch at a time construction costs have gone up substantially, Tiefenbrunn said.

The humane society originally announced plans two years ago to remodel its existing facility, built in 1988, and add an education building, all at the current site at 1911 E. Main St., U.

With those plans came a $1.75 million fundraising campaign — a goal that was surpassed, with nearly $2 million raised, according to George Amaya, president of the group’s board.

By the time bids were sought last fall, the cost of the $1.75 million project had nearly doubled to $3.4 million, prompting the organization to reconsider.

“We did not expect the pandemic and the rise in the cost of materials,” Amaya said.

In addition to the higher cost of construction was the added issue of investing that much money on property the humane society doesn’t own, Tiefenbrunn said. The organization owns its current building, but leases the land from the county.

“The board felt like ‘We need to stop and think about this,’” Tiefenbrunn said.

The Kearns Drive property was already on their radar because the humane society had been looking at rental possibilities to temporarily relocate to reduce stress on the animals while construction was underway in Urbana, Tiefenbrunn said.

As she and Amaya looked at the Kearns Drive land and its existing buildings, she said, “we got a vision and started doing our due diligence.”

Plans for the new campus include the same upgrades in housing for cats and small animals that were already planned for the Urbana site, Tiefenbrunn said, but “what this offers us, which is really great, is the opportunity to start from scratch on the dog kennels.”

The new dog-kennel area will include two separate compartments for each dog — offering dogs their own private places to be out of the public eye when they’re feeling stressed — plus an opportunity for the staff to clean one compartment while a dog is in the other, she said.

The new plans also call for dog kennels to be situated so that no kennel is directly facing another, Tiefenbrunn said. And the holding area for incoming dogs will be in a separate building, keeping potential illnesses — and more barking — away from the already-sheltered animals.

Also in the new plans is providing natural light for all the animals and reducing stress on cats and small animals by housing dogs on one side of the main building and cats and other small animals on the other, away from the sound of barking, Tiefenbrunn said.

About that second building: That’s going to be an education building that will give the humane society a much-needed place of its own for holding training classes and events, Tiefenbrunn said.

“I’m extremely excited about this,” she said. “I think this is a great move for the organization. I’m looking forward to having a new shelter to meet our needs and to be current with standards in shelters, which have changed a lot.”

Amaya is also excited about the change in plans, he said.

The new campus will be more centrally located in the county, and living quarters for animals will be improved from 1980s standards to today’s standards, he said.

“This will help us with our care and commitment to the animals in Champaign County for the next 50 years,” he said.

The Humane Society was able to buy the Kearns Drive property with its reserves and will transfer all money previously raised for the building project in Urbana to remodeling the buildings at the new site, Amaya said.

The group doesn’t plan to launch a supplemental fundraising campaign, Amaya said, but there will likely be some additional opportunities for those who want to give.

Amaya said he and fellow humane society leaders want to express to the local community how grateful they are.

“They are just so generous in understanding that our mission is to find forever homes for these animals. They grasp that,” he said.

Tiefenbrunn said the move to Champaign won’t change the humane society’s collaboration with Champaign County Animal Control. The humane society will continue taking unclaimed adoptable dogs and cats from animal control to put up for adoption.

The humane society’s land lease with the county runs through 2026, and Amaya said that lease will remain in place for now.

The basics of feeding cats

Nutrition is key to pet health

After losing a pet, when is it time to love again?