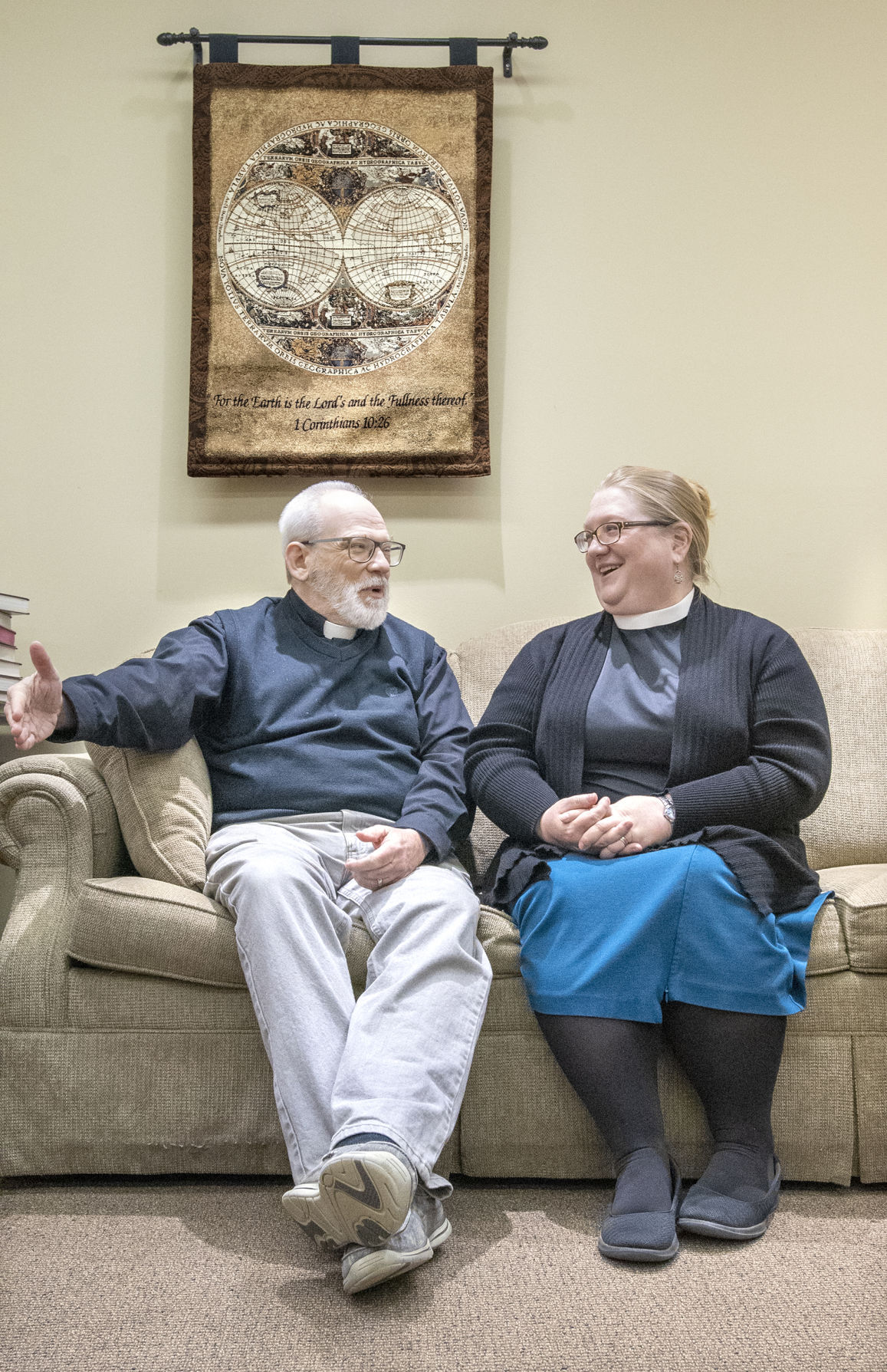 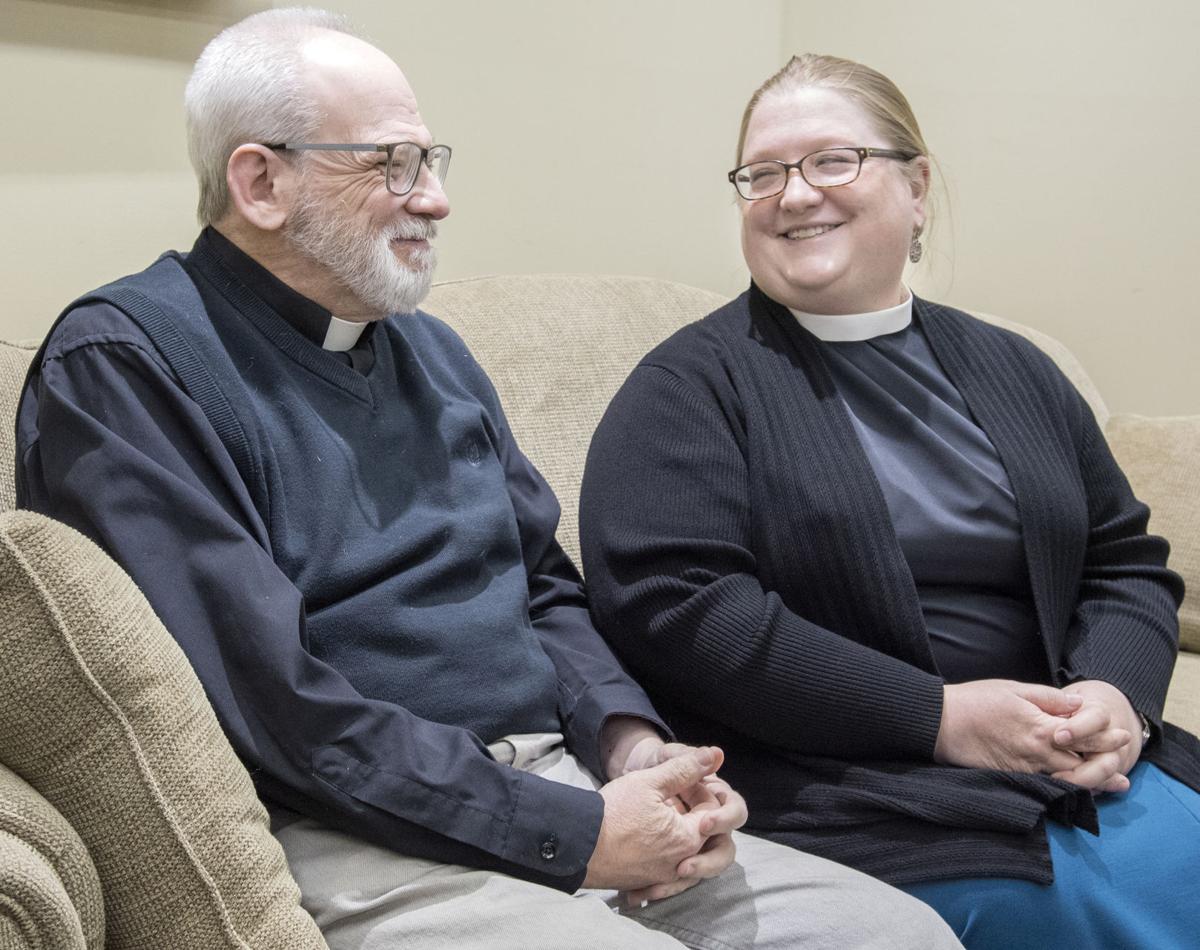 CHAMPAIGN — Call it good timing, or a match made in heaven.

Two Lutheran churches in Champaign-Urbana were looking for new pastors last year while the Revs. Paul and Lynette Chapman — a married clergy couple in Pennsylvania — were looking for two new churches to serve.

“We were up for an adventure, and God called us here,” recalled the Rev. Lynette Chapman.

Relocating in the midst of the COVID-19 pandemic would have been challenging enough.

But within a couple of weeks of starting at her new church, the Rev. Lynette Chapman became ill with COVID-19 and spent some of her first weeks in Champaign in isolation at home.

Her husband and their daughter, Raylynn, didn’t get COVID-19, but they were still quarantined at home.

Then, with the expectation that their daughter would be transferring to Parkland College, the family learned in December that Raylynn had been accepted at Illinois State University, prompting a scramble to get her packed and relocated to Bloomington-Normal in 10 days, the Chapmans said.

With the pandemic closing church buildings to in-person worship for a time, the Chapmans began their ministries at their new churches remote worship-style, and it’s taken longer than it ordinarily would have for them to get to know their congregations, they said.

“It’s been very slow,” the Rev. Paul Chapman said. “There are a lot of people who are faithful members of St. Matthew that I’ve never met.”

For the Rev. Paul Chapman, who sports a Chicago Cubs face mask, relocating to Illinois was a homecoming.

He grew up in Chicago and had fully planned to make music his career, he said.

He graduated from North Park College in Chicago with majors in music and political science and for 20 years worked as a freelance musician and managed several Rose Records locations in Chicago.

It was music that drew him to the seminary. He entered the Lutheran Theological Seminary at Gettysburg, in Pennsylvania, to study church music. But one year in, he felt a calling to the ministry, he said.

He was ordained at age 39 in 2001, beginning his ministry in Pennsylvania with his wife.

The Chapmans met during their seminary years and had a whirlwind courtship — first date on Halloween, engaged the following February and married the following August, in 1997.

The Rev. Lynette Chapman, who was ordained in 2000, spent her childhood in the Indianapolis area, and she and her family moved to Pennsylvania when she was in her teens.

She graduated from Penn State with a degree in agricultural economics and rural sociology.

She recalled feeling a calling to the ministry when she was younger, but her parents weren’t keen on women in the ministry, and she didn’t see it as a possibility for herself, she said.

When she did tell her parents she was feeling a call to the ministry, though, they were “happy and proud,” she said.

Over about two decades, the Chapmans each served at several Pennsylvania churches, with the last churches where they were pastors before coming to Champaign-Urbana being in two different counties and about a 45-minute drive apart, the Rev. Paul Chapman said.

They began thinking about making a move after their daughter, now 19, graduated from high school, the Rev. Lynette Chapman said.

They talked to their bishop and prayed about it and were called to their current churches a lot faster than they thought it would take to make a move in the midst of a pandemic, they said.

Typically, they’d have been asked to deliver a trial sermon at their prospective churches before they were called, they said. But given the pandemic, they were already preaching remotely at their former churches, so St. Matthew and Good Shepherd church members could see months worth of both Chapmans preaching online, the Rev. Lynette Chapman said.

‘The call to service’

While the Chapmans gradually got to know their congregations, this past spring offered the Rev. Paul Chapman another chance to begin getting to know more of his congregation arriving for outdoor work at the church’s Sola Gratia Farm, a vegetable farm that is a service ministry of the church, he said.

St. Matthew also began working with Silver Hearts, an outreach to the poor living in Urbana’s Silverwood neighborhood near the church, he said.

The church offered a “trunk or treat” this past Halloween and handed out candy to 250 neighborhood children, he said.

On Thanksgiving, the Chapmans were planning to have a lasagna dinner at home with their daughter — but not before both their churches provided holiday meals for others.

St. Matthew worked with Silver Hearts to provide bagged meals to residents of the Silverwood neighborhood, and Good Shepherd made 200 turkey sandwich bagged lunches and delivered them to people who had to work on Thanksgiving day.

“We take the call to service as very serious,” the Rev. Paul Chapman said.

— The Chapmans have made their home in Champaign, and they share it with two cats.