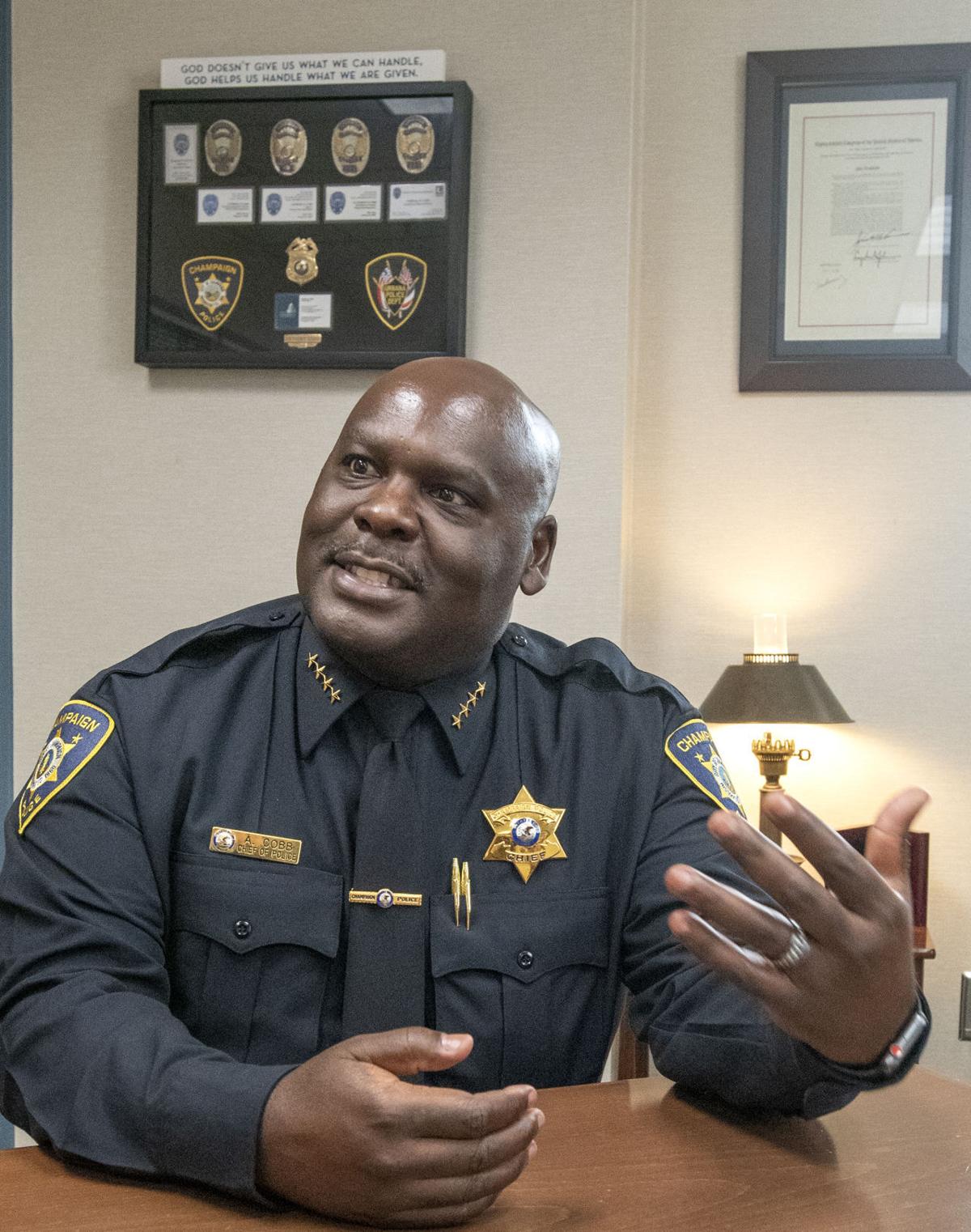 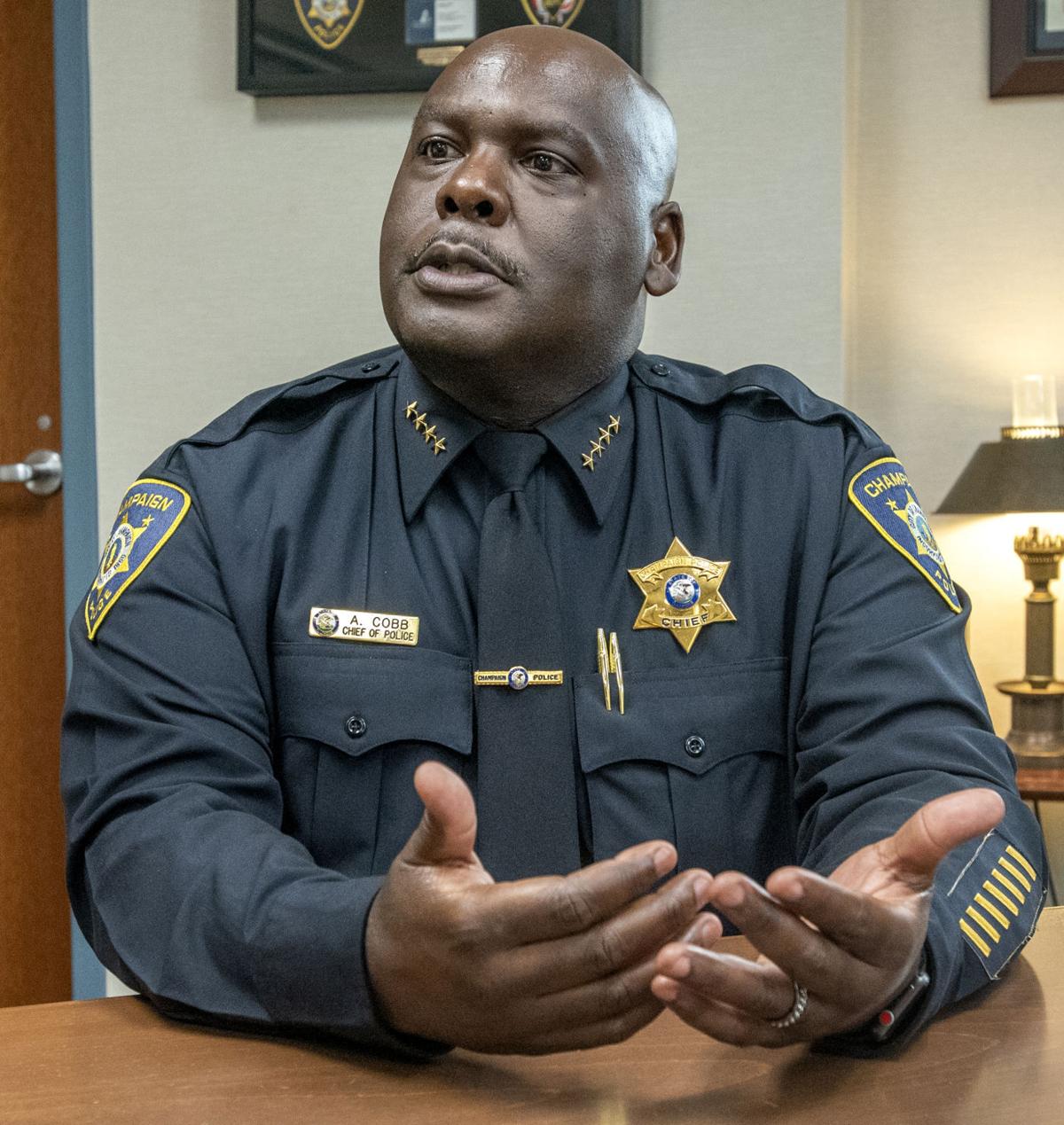 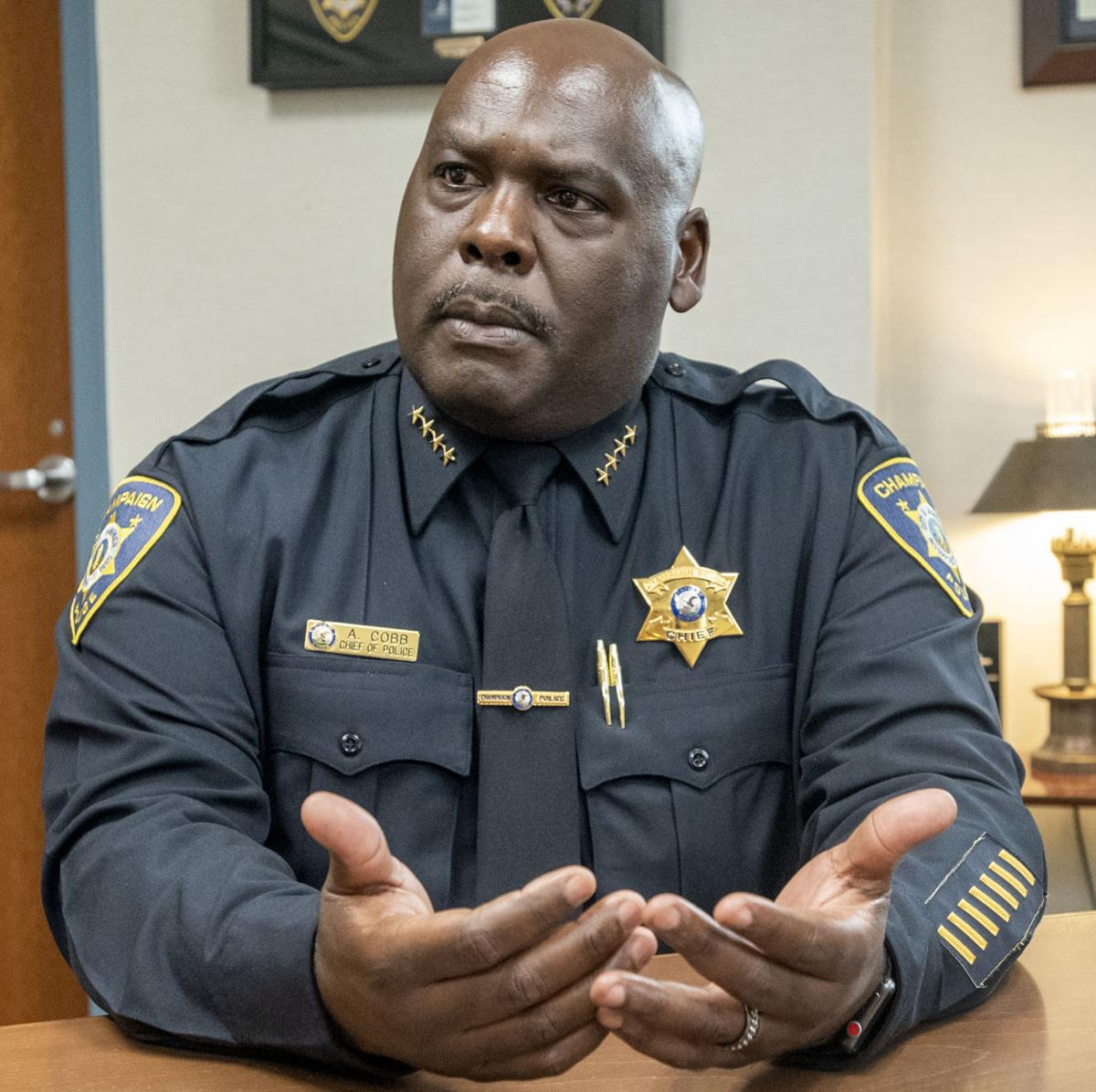 Police Chief Anthony Cobb talks about his job change in his office at the Champaign Police Department on Thursday, July 8, 2021. 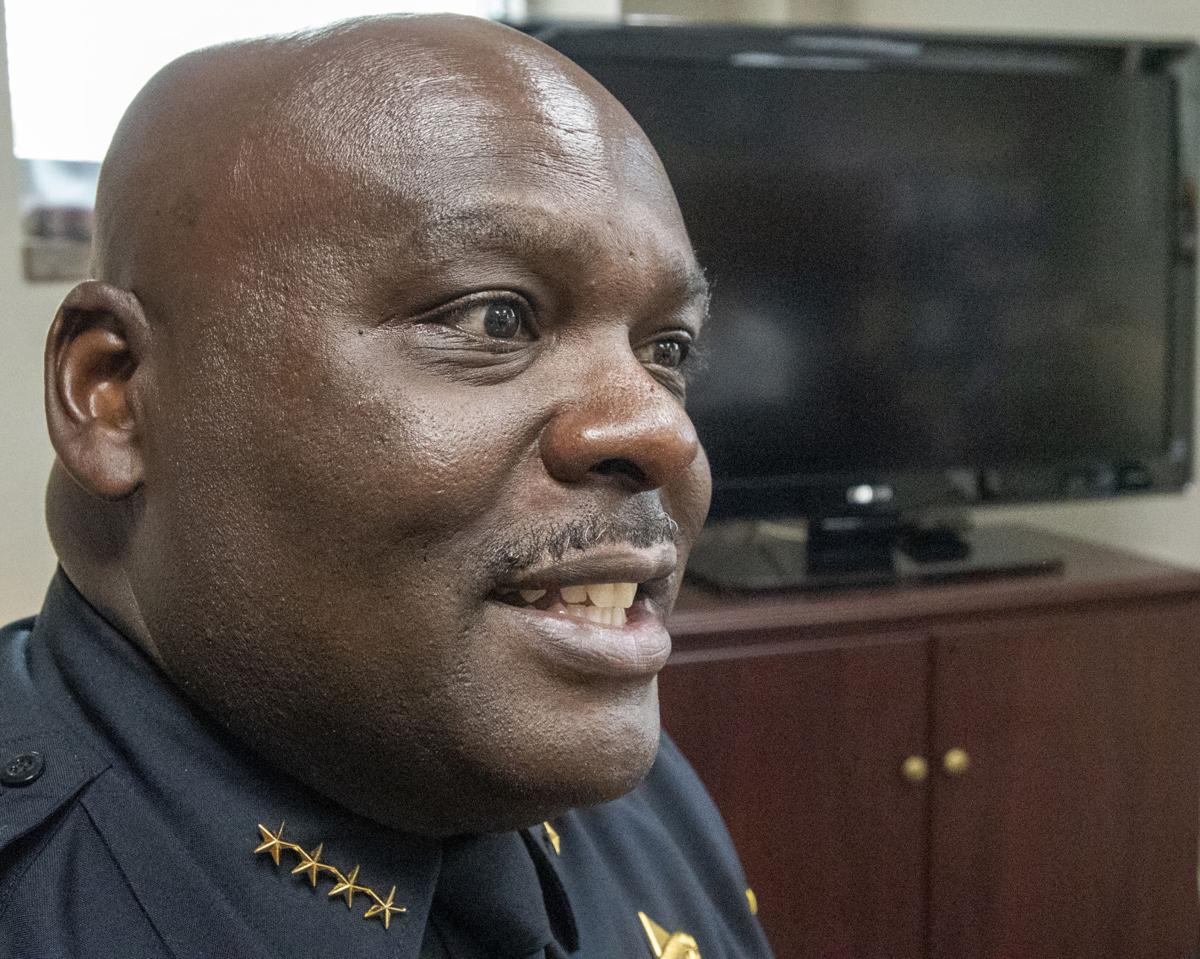 The highest-profile police position the city of Champaign must fill: the one set to be vacated in August by Chief Anthony Cobb, here in his office earlier this month talking about his job change.

Police Chief Anthony Cobb talks about his job change in his office at the Champaign Police Department on Thursday, July 8, 2021.

The highest-profile police position the city of Champaign must fill: the one set to be vacated in August by Chief Anthony Cobb, here in his office earlier this month talking about his job change.

CHAMPAIGN — Champaign police Chief Anthony Cobb may be leaving his post, but he’s not leaving his community, he said.

Even as he moves on to his next steps at the Illinois Law Enforcement and Standards Board, he promised this: “I’m always going to be engaged.”

Cobb said the change will let him be more active at his church, officiate and umpire youth sports, get back into coaching a Little League team or two.

“I don’t like sitting at home watching TV. I’d rather be out in the community doing something,” he said. “It’s easier as private citizen Anthony Cobb than it is as chief.”

Cobb oversaw a police department during a decade when the profession has been regulated, scrutinized and reflected upon perhaps more than any time in American history.

Now, he can take a breath.

“This gives me the opportunity to spend a little bit more time with family,” he said.

It also “gives me the opportunity to be more selfish, have more vacations, spend time with grandkids, and do things that are important to long life expectancy,” he said during an interview Thursday with The News-Gazette hours after the city announced he’d be leaving his job of nine-plus years on Aug. 6.

He’s moving on while the city grapples with the loss of an officer, and with gun violence rising in the county, state and across the country.

But Cobb wants to be clear: That’s not why he’s leaving.

“This has been in the process for a few months,” he said from his current office in Champaign. “I’ve had a couple conversations with the director about this opportunity before it presented itself. This is not a knee-jerk reaction or something like that, or that I’m upset that someone said something — no, it’s been in the process.”

Cobb uses one word to sum up turning the page: bittersweet.

So does Urbana police Chief Bryant Seraphin, who has known Cobb since 1994, when Seraphin walked in the doors of the Urbana Police Department while Cobb was a community resource officer.

“With Chief Cobb leaving, it’s sort of like my big brother in the local law-enforcement community is moving out in and moving on to different things,” Seraphin said. “So, I’m happy for him, but it is bittersweet.”

Cobb prides himself on “staying ahead on what reform looked like,” on what the public wanted in citizen review boards and community coalitions.

“We really made it a point to listen to our community, and the changes that we are seeing forced upon the state, whether its reform or may come down from the feds, those weren’t huge issues for us in Champaign,” he said. “A lot of those changes we already made voluntarily, and the reason they were done voluntarily was from conversations from our citizens.”

Champaign police officers have had to use body cameras since spring 2017. The city instituted a use-of-force review board in March 2018 that meets monthly, which is not yet required by the state.

About five years ago, a Champaign police review found that the department was around “13 or 14” officers below its ideal number, Cobb said.

Then 2020 happened, and set into course a police staffing shortage that’s hitting cities across America.

“What we didn’t know was COVID, the pandemic was going to come and make it hard to do things, get officers in training, and then we didn’t know George Floyd was going to happen, and civil unrest that led to sweeping changes that a lot of states are dealing with, but it makes it a lot more difficult and challenging to get into the profession,” Cobb said.

Some of the shortage was projected, but the pandemic and nationwide reckoning with race and police set in motion a “perfect storm” that’s magnified existing issues, Cobb said.

The turnover hasn’t been limited to the area’s largest law-enforcement agencies:

“One of these officers would have likely stayed longer, but immediately retired due to the uncertain future of law enforcement following the passage of the SAFE-T Act” by the state Legislature, Brown said.

“Even as an officer, if we pull the trigger and do something that’s completely justified, you still have to go through the public scrutiny of it, and when people come out with the investigation, they rush to judgment,” Cobb said.

“I do believe that police are in general more conservative, a bit less aggressive as to how they seek out criminals than they were in the past,” Walsh said Thursday. “Just because of all the backlash. Any time you do something, whether it’s good or bad, you got people criticizing you.”

Walsh found the use-of-force modifications introduced by the state earlier this year to be “dramatic,” and potentially damaging for new recruits. Combined with pressures and tough hours, it’s a tough sell.

“I believe this is happening, where senior officers don’t want to put up with everything they have to nowadays, and they start resigning,” Walsh said. “It takes at a minimum a year before a cop can really be turned loose on his own, if not longer. Just because I hired 10 today doesn’t mean I’ll have 10 on the street tomorrow.”

Champaign has dealt with its own brand of police-related strife that’s left a lot of officers “thinking twice about it.” The death of Officer Chris Oberheim hit the department hard.

“With that being so close to home, every employee in this building should be having a conversation with their family and have probably had those conversations of ‘What does the future look like for me?’ because that does resonate,” Cobb said.

Cobb looks forward to the day that the staffing crisis is fixed in Champaign and elsewhere. The city council has a study session scheduled for July 20 to “accelerate” police hiring, and bring the city closer to a continuous hiring process, David said.

“Staffing is a huge issue right here in the Champaign Police Department, as it is in several other departments in the area and across the country, but once we address that staffing issue, where we can free people up to do engagement stuff, that’ll be a great day for the citizens of Champaign,” Cobb said.

The Rev. Willie Comer was shocked to hear Cobb trash-talking kids at their Midnight Basketball games.

When Comer and the young hoopers saw Cobb show up in plainclothes, run the scoreboard and rip into the kids when they made a bad play, everyone would be “cracking up laughing.”

“I mean that actually shocked me, because I didn’t know he knew the kids,” Comer said. “So if they missed the shot, Chief would say, ‘Aww man, that’s just horrible, you’re horrible.’”

Cobb hasn’t missed a single Campference event that Comer runs, and guarantees he’ll be at next Friday’s as well.

Seeing Cobb at a press conference last Friday — where he pleaded for the public’s help after a 17-year-old was killed in the city’s 137th confirmed report of shots fired this year — was heartbreaking for Comer.

“I’ve never seen him really so frustrated that he shows it, where he’s calling on the community to help them,” Comer said. “When people are not talking, when you know who shooters are, and you’re not helping police to gather and arrest these guys, what do you want them to do?”

Comer, pastor at Champaign’s Berean Covenant Church, will cherish Cobb as a role model for youth and transparent police chief who made the effort to show up for his community as a civilian first.

Comer hopes the next leader keeps the community ties that Cobb’ has established.

“To have a new chief come in a new leader and totally disrupt any trust between the communities would be a detriment to everything that we’ve tried to do,” Comer said.

Cobb’s main priority this next month: making sure “we’re not dropping any balls in transition.”

That means relaying all available information to his staff, and thanking every last one of his employees on the payroll.

And reiterating to community partners that recent gun violence is an issue that can’t be solved with officers alone.

“We all have to work together, roll up our sleeves and be a part of the solution,” he said. “I always said, if you’re not part of the solution, you’re part of the problem. Right now, if we look at all the violence we’re seeing, we’re going to need to get citizens in impacted neighborhoods and the rest of the city to help us to deal with that.”

Champaign City Manager Dorothy David said the local community will have many opportunities to share their thoughts on choosing the next police chief.

‘You have been a source of strength, hope and resilience'

Just 1 Question: What does Champaign need in its next police chief?