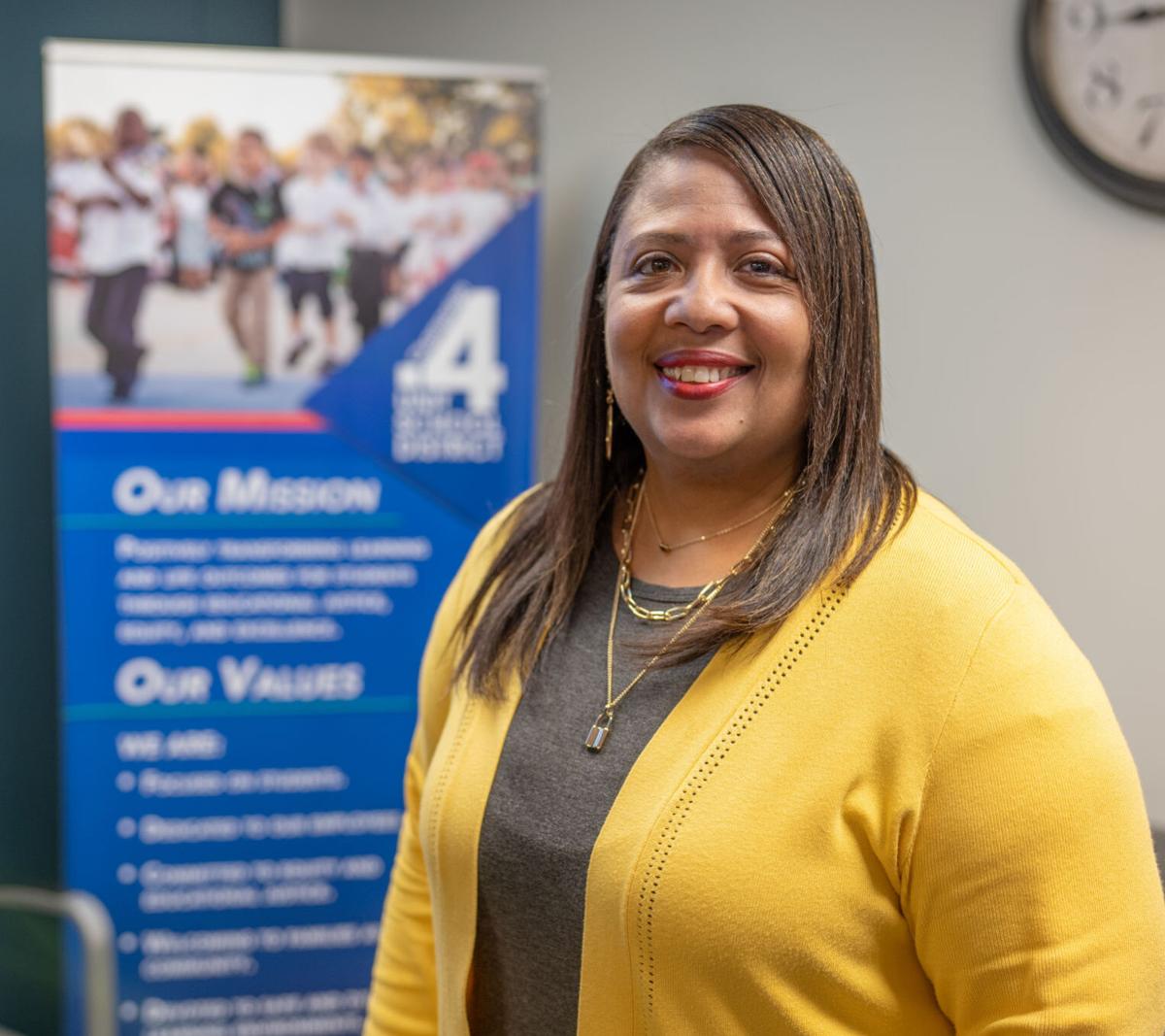 After taking over this month, Superintendent Shelia Boozer is preparing for her first school year on the job. 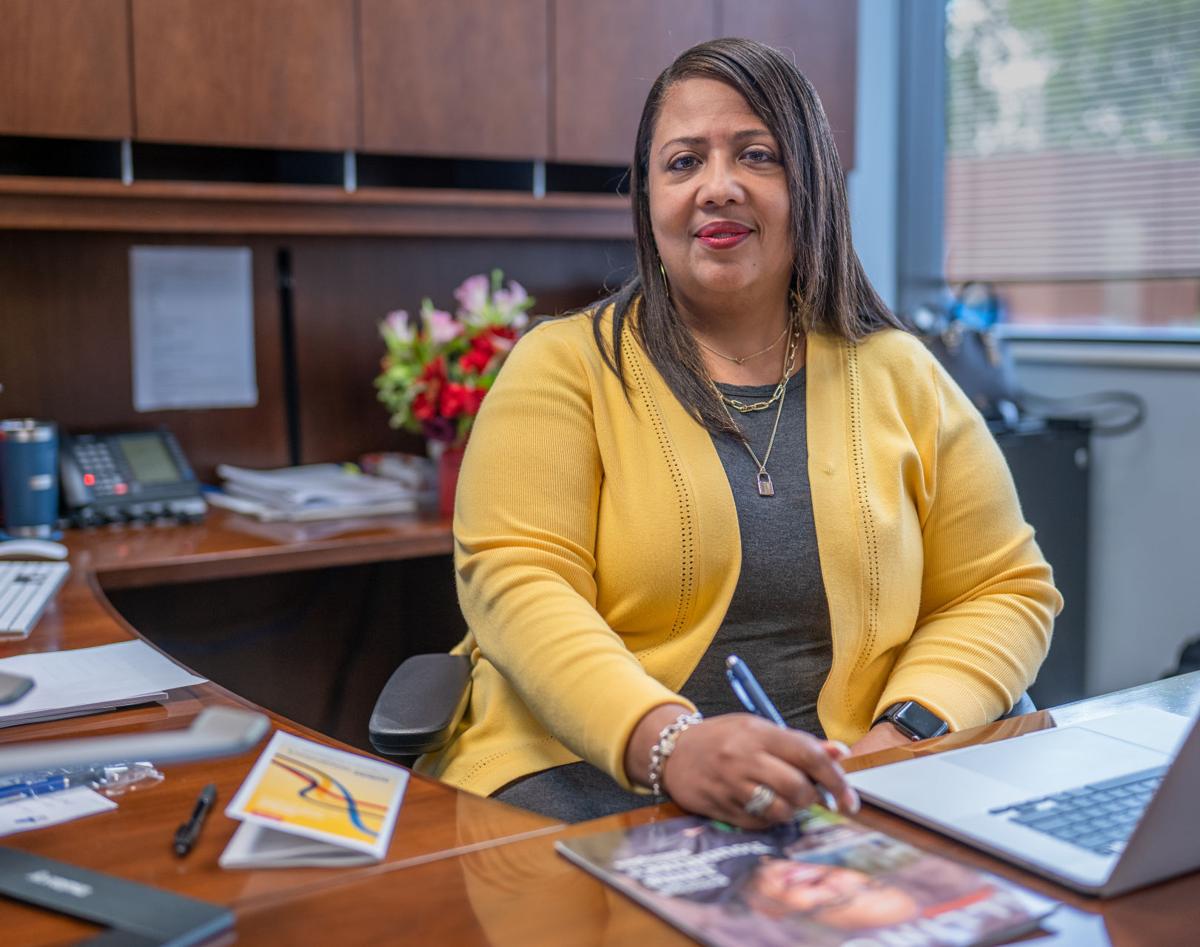 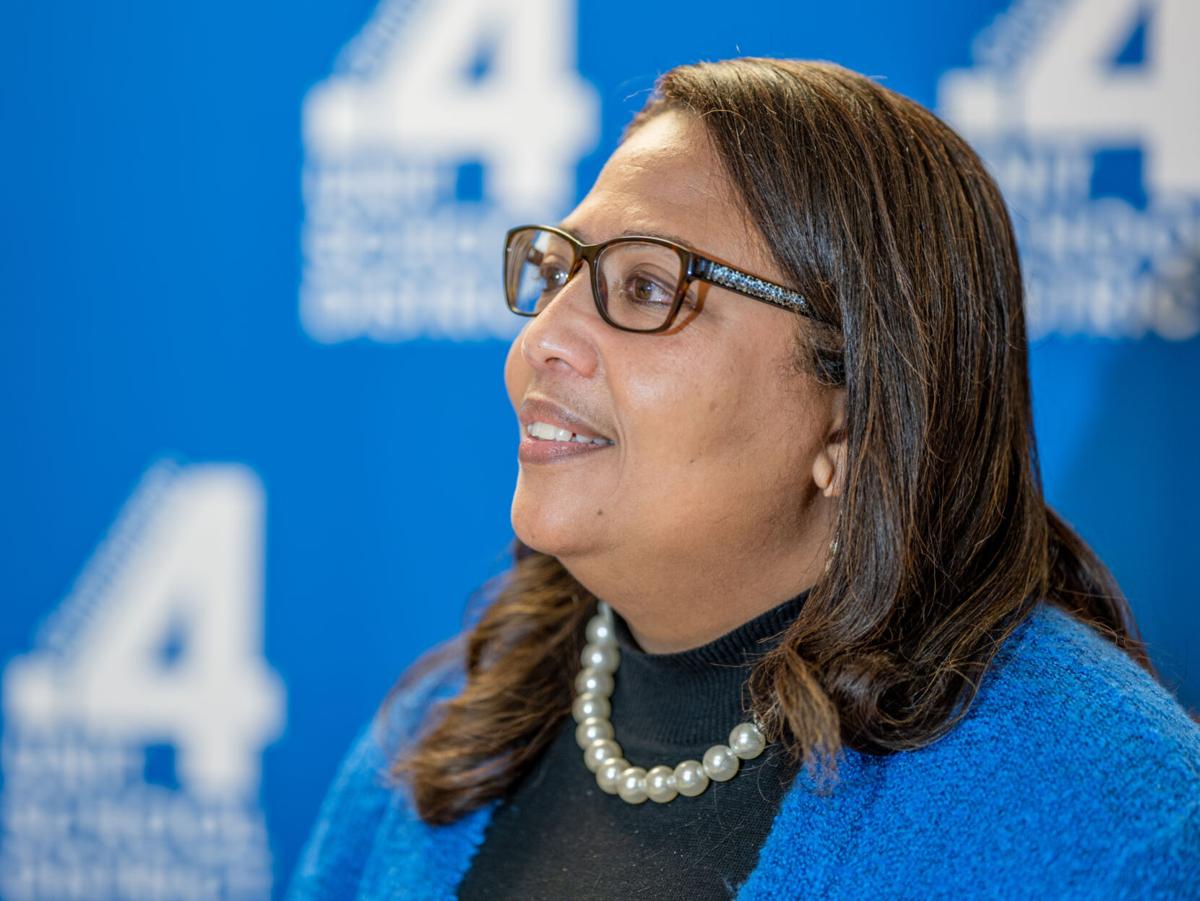 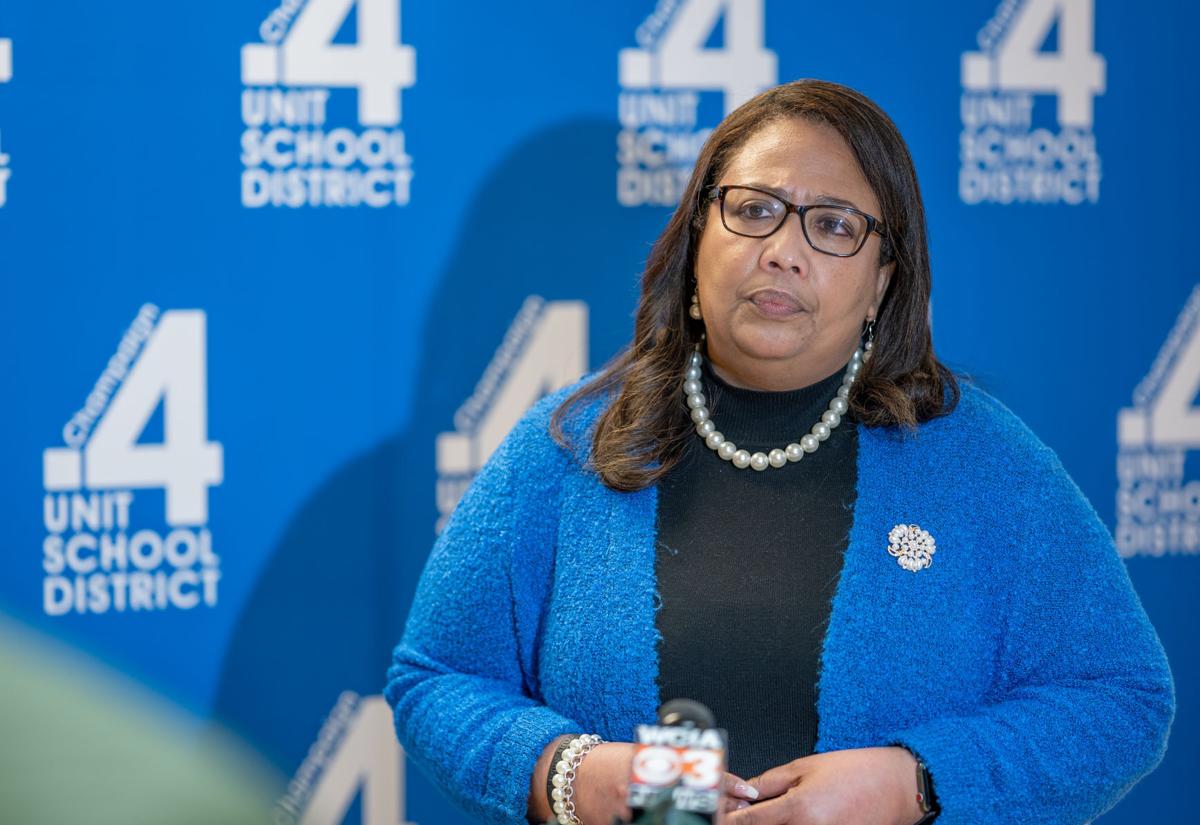 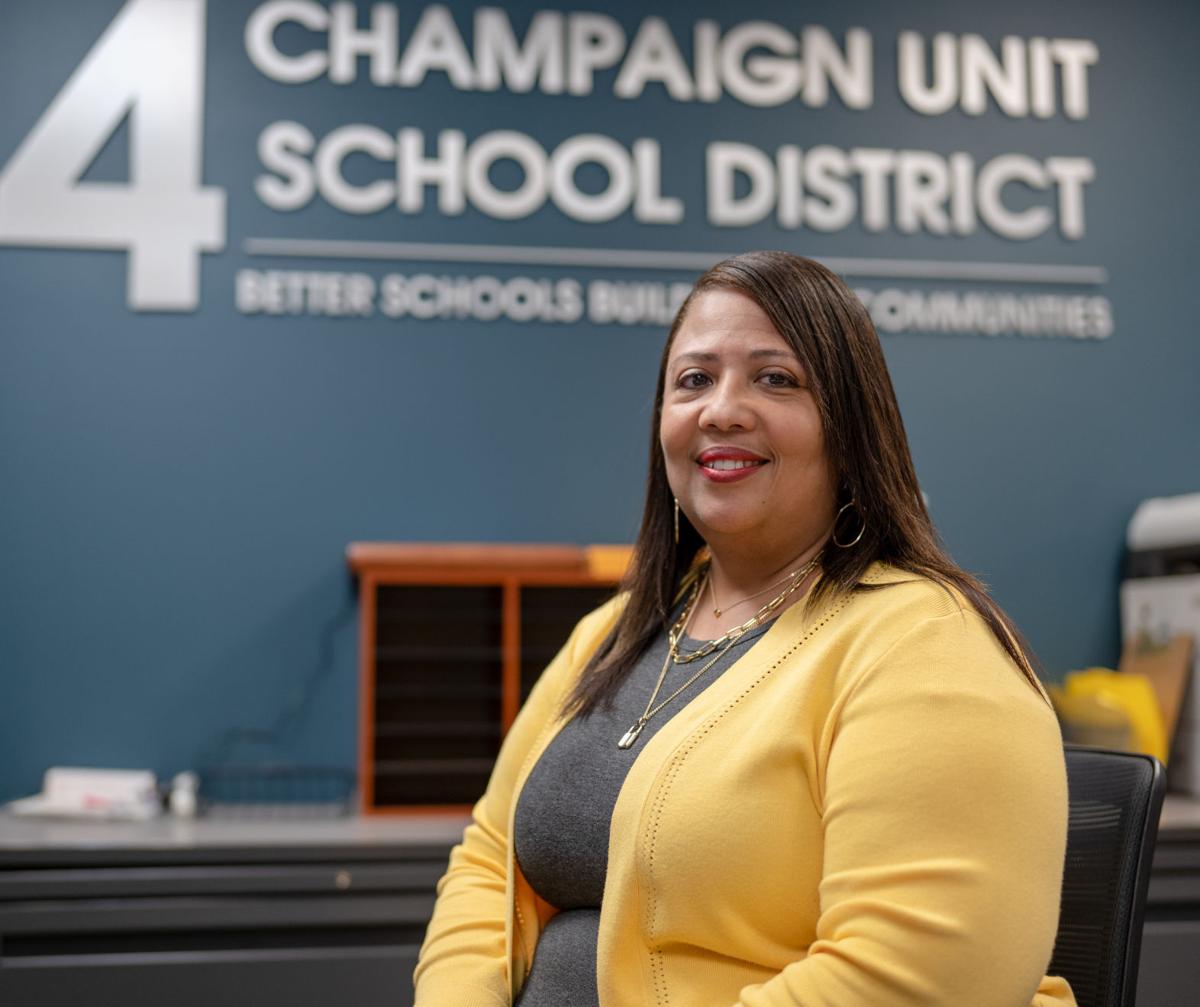 After taking over this month, Superintendent Shelia Boozer is preparing for her first schoolyear on the job.

After taking over this month, Superintendent Shelia Boozer is preparing for her first school year on the job.

After taking over this month, Superintendent Shelia Boozer is preparing for her first schoolyear on the job.

CHAMPAIGN — Shelia Boozer was so wired after her final interview with the Unit 4 school board on Jan. 20 that when midnight rolled around, she was wide awake.

After all, this was the first job of its kind that the Springfield native had applied for, and in the district’s strategic plan and the board’s anti-racism resolution, she saw a vision that aligned with hers.

So when she received the call in the middle of the night offering her the superintendent job, her eyes were wide open.

“After going through the process, it was so exhilarating, and your passion is showing, and after you have those moments, it kind of takes you a moment to (breathe) and relax,” said Boozer, who officially took the job at the beginning of July.

It’s little surprise that Boozer felt energized after her interview.

Board President Amy Armstrong called her “a bright light.” Springfield Superintendent Jennifer Gill described her as “outgoing and vivacious.” It’s one of the reasons Gill hired Boozer as her director of teaching and learning when she took over as the district’s leader seven years ago.

“You see her all the time, very present and very visible, and those are the things that I was looking for,” Gill said.

Of course, Boozer brought far more than a social disposition to the job. She had a penchant for devouring books and dispensing the knowledge she learned to her peers.

Early last school year, she distributed a book called “Cultivating Genius” to district staff, reminding them that it’s their job to unlock the special attributes that lie beneath the surface of every student.

She also had a passion for pursuing equity by using data, something she plans on bringing to Champaign. She ran the district’s professional development program, and she helped implement restorative practices, which was the subject of the dissertation she recently defended to receive her doctorate degree from Illinois State University.

While Boozer worked under Gill, the dynamic wasn’t that of a boss and an employee.

“She actually has been a mentor to me on several things along the way,” Gill said.

Leadership is nothing new to Boozer. As the oldest of five children, the youngest of whom was 15 years younger than her, she often found herself in charge at her family’s home in Springfield, where they moved when she was 2.

“I was like their second mother, they tell me,” she said.

Her childhood was a happy one, despite the fact that her family was “very poor,” she said. One consequence of her family’s income, though, bothered her.

“The only thing I did not like was my lunch card, because in that time period, the color of your lunch card determined whether you were low-income or not,” she said. “It’s just always been inside me that, any time something didn’t sit right with me, it didn’t feel right, it didn’t seem like it was fair, I was always the person to call things out.”

She expressed her concern to her parents, and her mother began packing her lunch every day.

Schools in Springfield were highly segregated because of neighborhood boundaries, and when she was in the seventh grade, the district was issued a desegregation order and entered into a consent decree. For Boozer, that meant she’d be bussed several miles away from home rather than going to the school around the corner from her house.

As the years have gone on, she’s learned the nuance of the issue and the difficulties of integrating schools. Through an equity lens, though, she knows the implementation of bussing is often flawed.

“At that point in time, across the nation but particularly in Springfield, the schools were segregated, and Black schools did not get all the resources that were needed,” she said. “I’m not quite sure (how I feel) about bussing. Because when you bus, sometimes it’s on the backs of the marginalized students who are on the bus to get to a school.

“That’s kind of difficult to me, because you want diversity in your school, and you can’t control where people live, so school systems try to control what they can control.”

Instead of going to the school across town, her parents decided she and her siblings would enter parochial school. She attended the now-defunct Ursuline Academy, a majority-Black Catholic school.

All the while, her father, who became a minister when she was 10 years old, stressed the importance of going to college. It wasn’t a matter of if she would go to college, she said, it was a matter of where.

“And for him, I’ll be very thankful for that.”

Boozer enrolled at Springfield College, which later became Benedictine University at Springfield, for a year before realizing that the school was too costly. So she enrolled at Lincoln Land, also in her hometown.

After she received her associate degree, she took a trip to visit her brother, who was in the military. She enjoyed it so much, she said with a laugh, that she stayed for three years.

During that time, she worked in mortgage and commercial banking. She also met her husband, who was in the military.

“I wasn’t satisfied,” she said. “I’m the type of person that, once I start something, I have to complete it, even if I take a detour for a minute. Because life throws you detours from time to time, but even in spite of that, I knew I didn’t complete what I was meant to complete. I moved to Colorado for a while, and while I was out there, I was like, ‘Eh, I need to finish school.’

So Boozer came back. She enrolled at UI-Springfield with a major in psychology and a minor in education, and she began to develop a desire to teach. After working in Decatur for a year, she moved back to Springfield and taught for four more, spending time working in pre-kindergarten, elementary-school and middle-school classrooms.

She never envisioned deviating from that path.

“I honestly would have stayed in the classroom. When I tell you I loved teaching, I loved teaching,” she said. “There’s nothing greater, in my mind, and in my heart, than teaching, because it really helps to build our students, and students deserve to have a great opportunity and great teaching in their lives.”

District leadership, though, had different plans. Springfield’s superintendent at the time, Robert Hill, convinced her that she could make a broader impact if she moved up the chain of command.

She became a principal and soon moved up to the district level.

“(Hill) said, ‘I really need you to consider going into administration,’” she said. “I’ll be honest with you, I had taken the classes, I had the degree, but it was more about, ‘How can I make more money?’ because the higher your degree, the more money you can make.

“He said, ‘It’s a way to broaden your sphere of influence,’ and so I thought about it and said, ‘I can do that.’ And I appreciate that, because I was able to reach more students in a different way and more families and had a bigger platform.”

Nearly six months after she received that midnight call, boxes filled with books were piled up in the corner of Boozer’s new office at Unit 4 district’s Windsor Road building.

“I’m waiting for my new bookshelves,” she said with a smile.

While she has strong convictions toward equity, Boozer is waiting on weighing in on specific district policies like Schools of Choice, which is currently under review, in part because of increasing segregation and inequity in elementary schools in recent years.

“I’m still the new kid on the block,” she said.

A look at her past, though, shows what issues may come to the forefront.

Utilizing data — including the Measures of Academic Progress (MAP) test and the SAEBRS assessment, which shows where students stand with social and emotional skills — was a priority of hers in Springfield in order to assess and benchmark students.

She also wrote her dissertation on restorative practices, which requires school staff to assess why a student misbehaved rather than simply doling out punishments.

Through a combination of restorative justice and other models, Gill said her district has decreased suspensions significantly in recent years.

“And that’s because as a school system, we don’t do things with our families and our kids. We sometimes do things to them. So that’s why I was drawn to restorative practices.”

One of the most important differences between a superintendent’s job and any other in a district, Gill said, is community engagement, and Boozer isn’t one to shy away from social situations.

“She’s very loyal,” Gill said. “She will work hard and serve Champaign from the very start. She goes all-in all the time with her job. She’s very close with her family, and her family means a lot to her, but I would say that extends to the workplace family as well.

“She gets to know everybody on a personal level as well as professional level.”

Boozer has never lived away from Springfield for more than a few years, so it took a specific type of job to make her uproot her life. In Champaign, she thinks she found a district that shares her values.

And that excites her.

“I come from a community that has embraced me, that I grew up in, my children, my family,” she said. “I was looking for something that was going to connect with who I am and go to the next level so I could broaden my sphere of influence.

“When someone brought to my attention that this position was open, I looked at it a little bit and was like, ‘Well. Maybe.’ And then I looked at the (anti-racism) resolution and the strategic plan and said, ‘This is my time to step outside of my comfort zone, so to speak, and put into action what I believe. And in the school district and the community that is ready to embrace the work that I truly believe in.’”