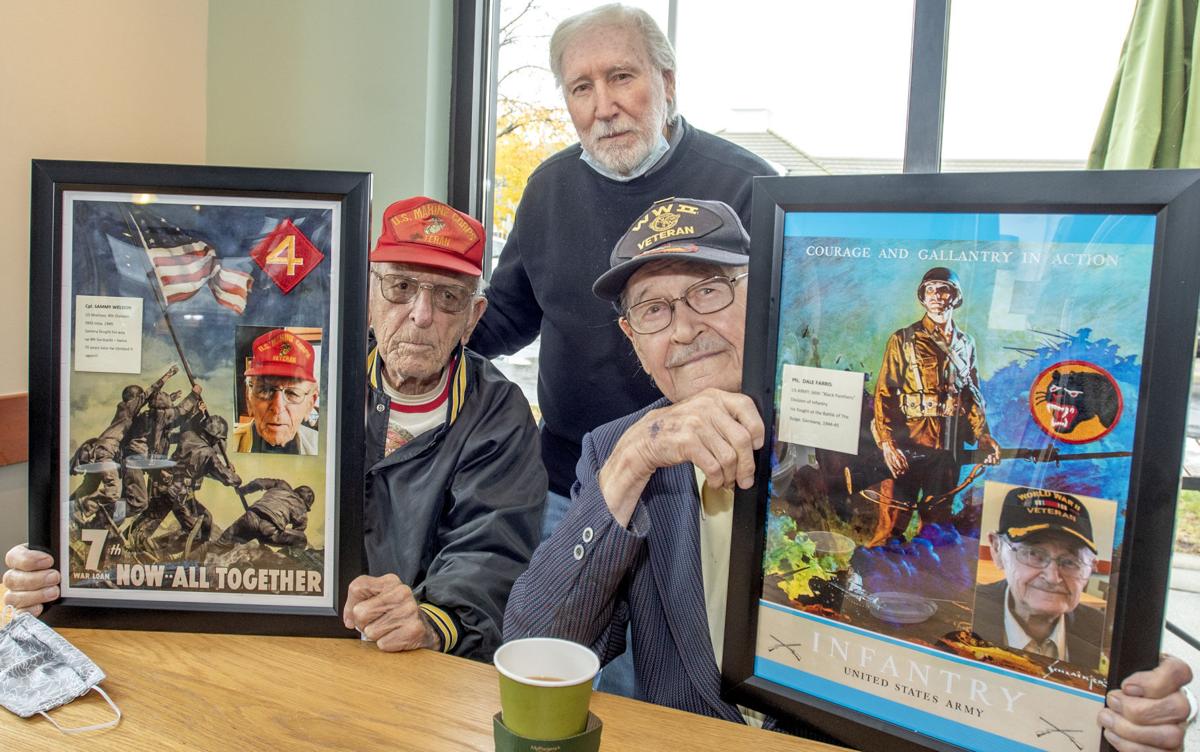 Sammy Weldon, left, and Dale Farris hold up posters commemorating their military service designed and given to them as birthday gifts by their friend, Ted Odenweller, back. The WWII veterans were enjoying coffee at Panera in Champaign on Oct. 27 as part of their weekly get-togethers. 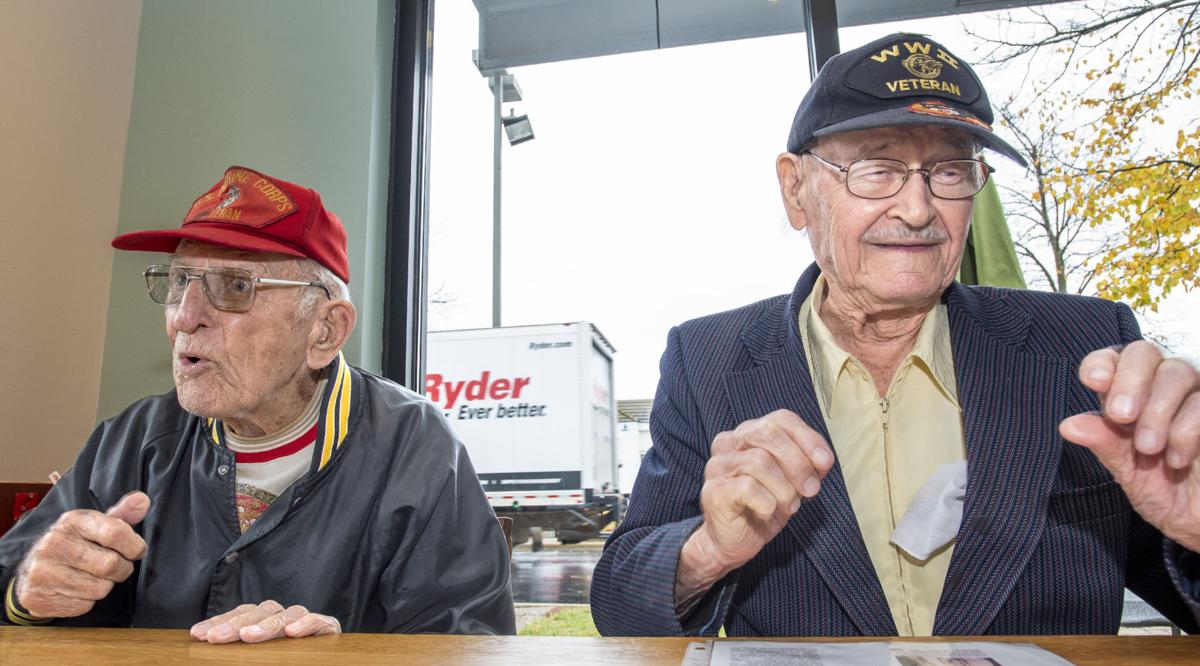 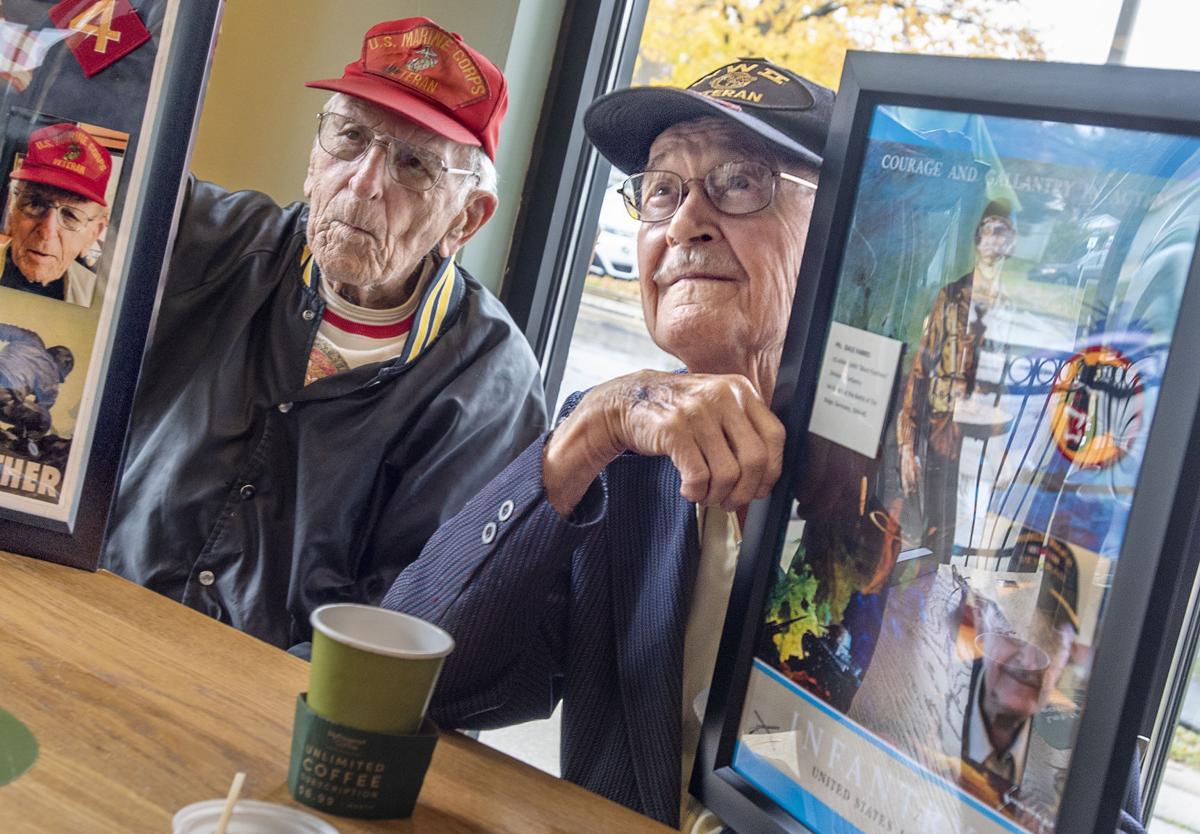 Sammy Weldon, left, and Dale Farris hold up posters commemorating their military service designed and given to them as birthday gifts by their friend, Ted Odenweller. The WWII veterans were enjoying coffee at Panera in Champaign on Oct. 27 as part of their weekly get-togethers. 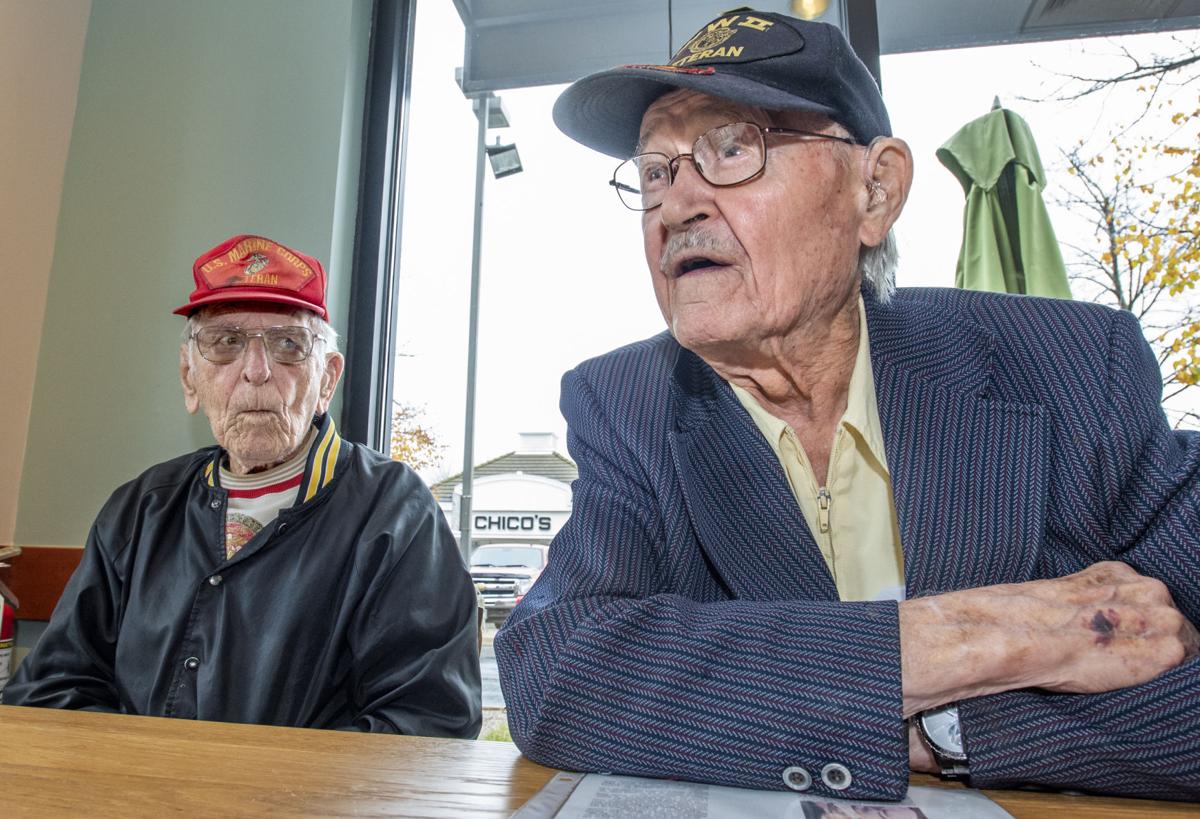 Sammy Weldon, left, and Dale Farris hold up posters commemorating their military service designed and given to them as birthday gifts by their friend, Ted Odenweller, back. The WWII veterans were enjoying coffee at Panera in Champaign on Oct. 27 as part of their weekly get-togethers.

Sammy Weldon, left, and Dale Farris hold up posters commemorating their military service designed and given to them as birthday gifts by their friend, Ted Odenweller. The WWII veterans were enjoying coffee at Panera in Champaign on Oct. 27 as part of their weekly get-togethers.

CHAMPAIGN — Two Champaign men who grew up near each other recently passed major milestones.

William Dale Farris, who goes by Dale, and Frank Weldon Jr., who everyone knows as Sam, turned 95 in October.

Worldwide pandemic notwithstanding, the widowers who have known each other since junior high mask up and get together once a week for lunch. Afterward, they head to Panera Bread on Kirby to solve the problems of the world over coffee.

Occasionally, the two members of what journalist Tom Brokaw dubbed “the greatest generation” relive memories of their military service.

Both graduates of Champaign High School’s Class of 1943 were drafted. Their experiences, while different, shaped their futures.

Weldon was among the few survivors of the bloody battle for Iwo Jima in the South Pacific in February and March 1945.

Exploding bombs there robbed him of ever having a satisfying telephone conversation and prompts him to start sentences with a pronounced “Hey,” as if to make sure you can hear him.

Remembered for the iconic Associated Press photo of the flag being raised by Marines on Mount Suribachi, the five-week battle allowed the U.S. to gain control of the Japanese-held island.

Its location roughly halfway between American Army Airforce bases in the Mariana Islands and the Japanese islands had given the Japanese time to prepare for American air strikes. Once in U.S. hands, it’s estimated more than 2,400 crippled B-29 bombers made emergency landings there, saving 24,000 lives.

How did he do it? “Just luck. I got blown up. That’s how I got these,” he said, pointing to his hearing aids.

Weldon remembers after the battle being sent to a ship where he was sprayed with DDT and given what may still rank as the best shower of his life and warm clothes. The nightmares followed.

“When the war was over, the younger guys were sent to Guam. I was an MP there. It was 85 miles long, from here to Kankakee,” he recalled.

The island was warm and overgrown, but the food was good thanks to it being the headquarters of Admiral Chester Nimitz, commander of the U.S. Pacific naval fleet.

Weldon returned to Iwo Jima on an honor flight with other veterans three years ago.

“We walked back up. It looked so different. It was hard to remember some of the bad things,” he said.

Farris intermittently forgets a name or a place but is clear on several facts about his military service in the European Theater, halfway around the world from his classmate and neighbor.

He had been studying chemical engineering at the University of Illinois for a few months when his draft notice came.

“I was 18 when I went in. I was willing to fight for my country. The entire time I was in the Army, I was not old enough to vote,” he said of his 2½ years of service.

A member of the 66th Infantry, Farris was en route on Christmas Eve 1944 to the Battle of the Bulge, in the dense forested area of eastern Belgium, northeast France and Luxembourg.

He credits a drunken commander for saving his life by putting him on the wrong ship. He was supposed to be on the Leopoldville, which was approximately 100 yards from his ship in the English Channel when it was hit by a German submarine torpedo. Some 800 men were killed, and much of the equipment intended for battle was sunk.

Instead, armed with just an M1 rifle, he and his fellow soldiers defended the sides of the battle. Among their duties were to guard two towns filled with Germans.

“We were on the front line for 135 days. By that time, we didn’t need ammunition. Just the smell of us, the Germans wouldn’t come near us,” he said.

He recalls the rich vocabulary of many of his military brethren.

“Every other word was a cuss word. I never smoked, drank or cussed. It was just against my whatever,” said Farris, who went on to make a living as a photographer for the Illinois State Geological Survey. “A lot of the guys asked me if my dad was a preacher.”

His father worked for the Illinois Central Railroad and was fortunate to remain employed through the Great Depression.

Farris recalls as if it were yesterday being in a downtown Champaign dime store with his dad as a young boy when they met another railroader who asked his dad to loan him a couple dollars.

“Dad handed him a $10 bill, and he cried like a baby,” Farris said of the man’s gratitude.

When the fighting ended, Farris spent another three months in Vienna, Austria, guarding German prisoners. He had Thanksgiving dinner in a castle.

Farris believes the atomic bombs that ended World War II saved far more lives in the long run than had been taken.

Both he and Weldon returned to Champaign and took advantage of the GI Bill to attend the UI.

Farris studied two years before getting his photography job at the Survey.

“Not many can turn a hobby into a vocation,” he said of the job he held for 35 years. He married and had four children.

Weldon also was in school for two years, hoping to become a teacher.

“I couldn’t concentrate. The beer joints were too good,” he laughed, acknowledging that there was no recognition of post-traumatic stress syndrome in the mid-1940s.

He went to work for his dad at Twin City Fish and Poultry, worked as a traveling salesman and owned his own pizza parlor for 16 years, marrying and raising three children along the way.

There are aspects of his service for which he’s grateful and would recommend it for young people.

“You learn a lot of discipline and respect for people. I couldn’t have stayed in. I wasn’t a military guy,” said Weldon.

Farris would not advise military service for today’s 18-year-olds.

“It should be against the law to have a war. Think of the people killed, the cost. If you could spend that for the good of mankind, it would be great.”