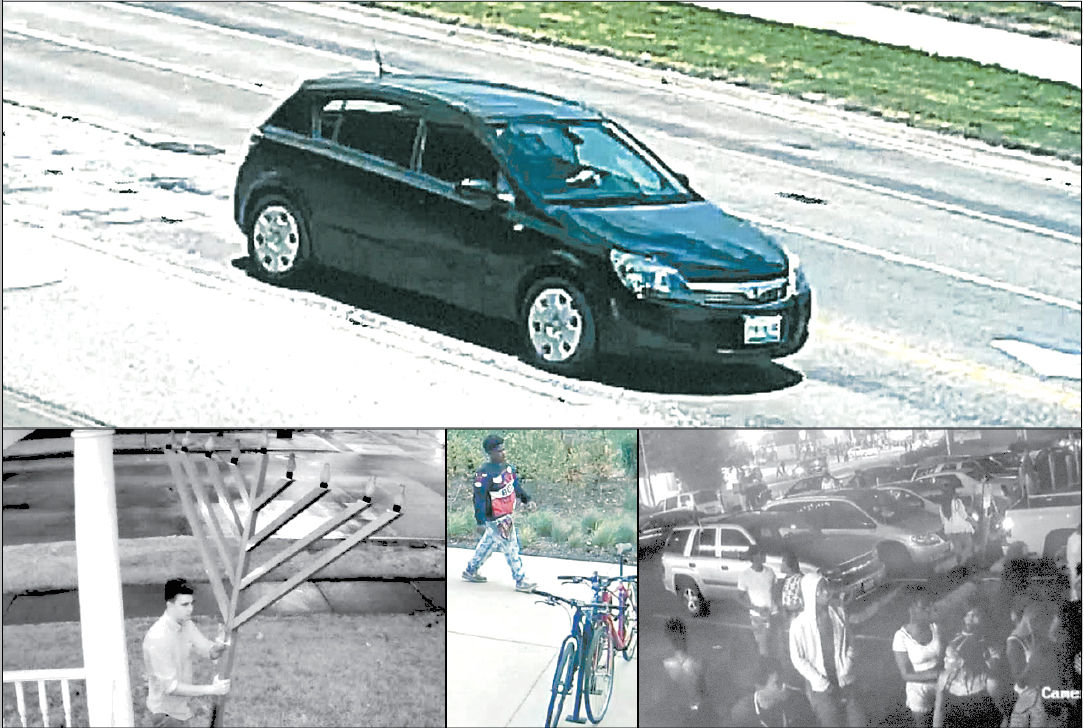 From help tracking convicted kidnapper and murderer Brendt Christensen (above) to identifying the menorah vandal (below left) and bike thieves (below center) to figuring out the participants in a fight at a party, cameras are in use all over campus. 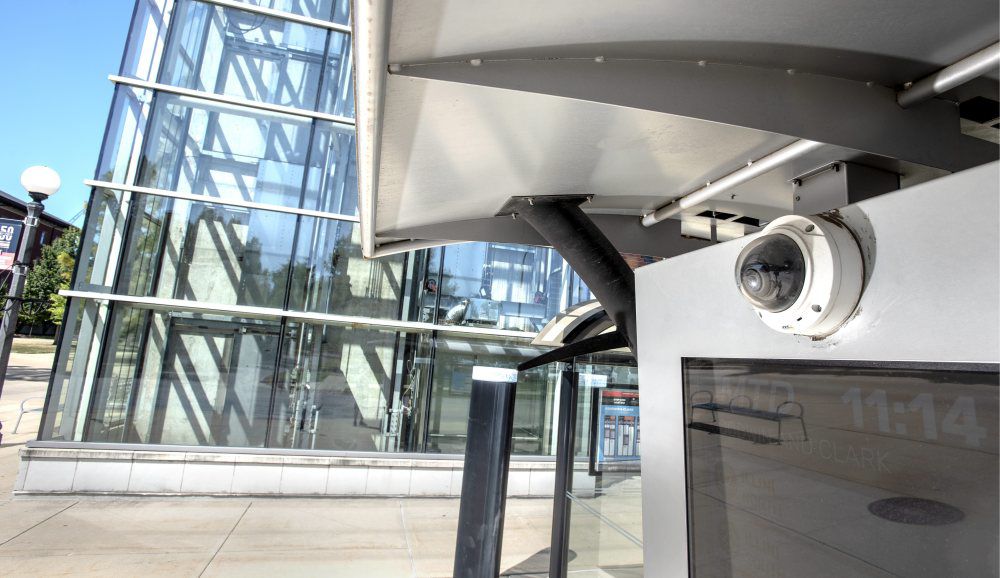 A camera near the bus stop on north Goodwin Avenue and west Clark Street in Urbana on Wednesday, August 28, 2019. 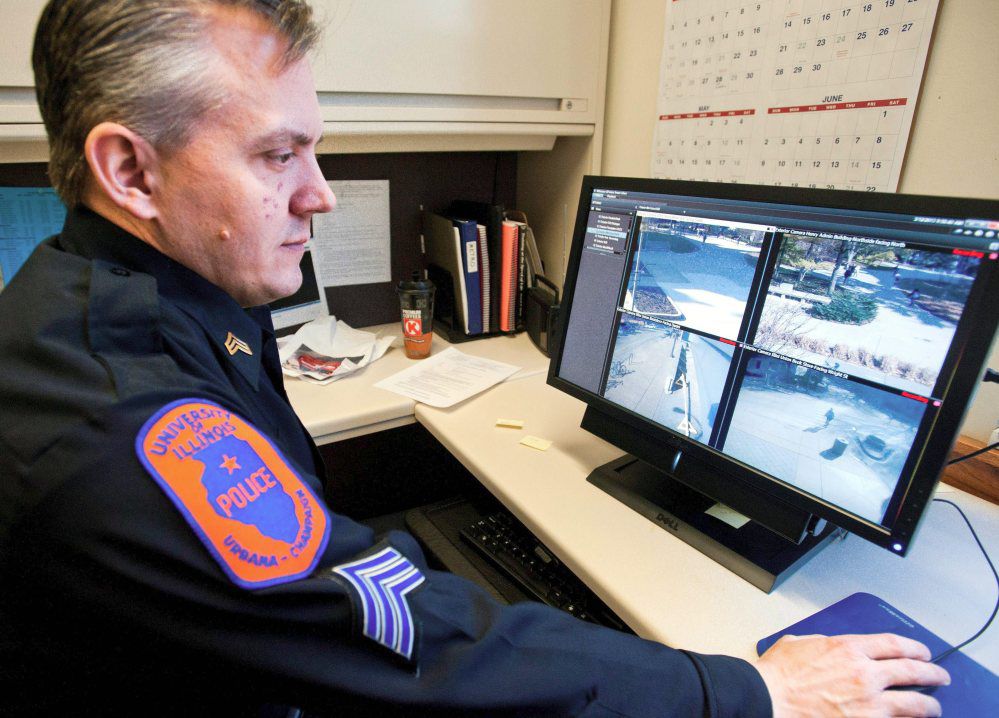 University of Illinois police Sgt. John Brown looks over a display of campus cameras, including those on the outside of the Illini Bookstore on Tuesday, March 12, 2013. 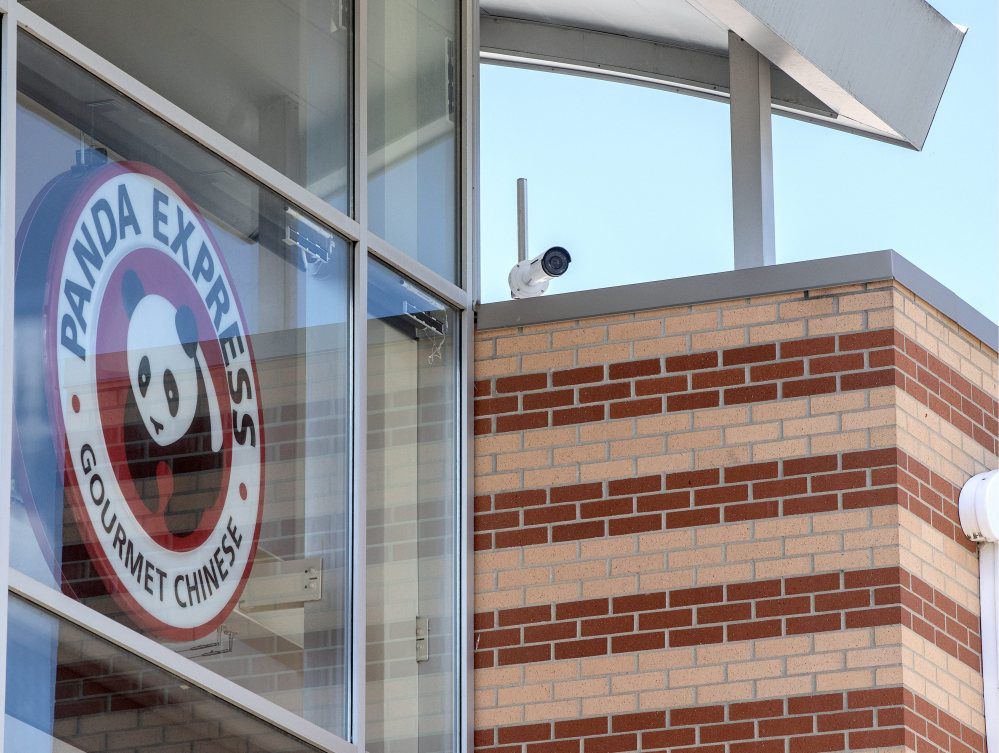 The camera at the intersection of Wright and Green Streets in Champaign on Wednesday, August 28, 2019.

From help tracking convicted kidnapper and murderer Brendt Christensen (above) to identifying the menorah vandal (below left) and bike thieves (below center) to figuring out the participants in a fight at a party, cameras are in use all over campus.

A camera near the bus stop on north Goodwin Avenue and west Clark Street in Urbana on Wednesday, August 28, 2019.

University of Illinois police Sgt. John Brown looks over a display of campus cameras, including those on the outside of the Illini Bookstore on Tuesday, March 12, 2013.

The camera at the intersection of Wright and Green Streets in Champaign on Wednesday, August 28, 2019.

Ed Kavanaugh sat at his desk on a winter night during the holiday season several years ago in the University of Illinois police station telecommunications office, working the third shift on an empty campus, when a boring night turned into one of his most consequential moments on the job.

The department’s telecommunications supervisor was barely paying attention to the screen in front of him showing footage from a security camera pointed toward the exit of a campus bar, one of what is now about 1,900 cameras on campus, when he noticed a man stumbling out of the bar, unable to walk in a straight line.

“I could tell, he’s a lot more hard up than the normal,” Kavanaugh said.

So using the system that allows him to toggle from camera to camera, he switched views to show him walking down the nearby alley to the edge of a loading dock with a dumpster adjacent, completely alone in the middle of a lonely campus.

Then came the moment that could have ended the man’s life had Kavanaugh not been watching.

He fell off the loading dock, smashed his head against the dumpster and fell to the ground, blood pouring from his skull. He crawled away out of the cameras’ view. And for Kavanaugh, it was time to act.

“I get dispatch out there to find him, and he had crawled away 30 to 40 feet and they found him unconscious,” Kavanaugh said. “The paramedics said that had he been out there another 20 minutes, they thought he would’ve been in serious trouble.”

Kavanaugh’s lucky catch isn’t a normal use case for the ever-increasing amount of cameras on campus. He can’t think of another one like it, where a catastrophe or crime was seen in the act.

For one, there are far too many of them to be monitored at all times. Common purposes of campus security include looking back at footage after a crime is committed or to give officers heading to a call information that would otherwise be unavailable.

The ability to canvas campus was crucial in the arrest of Brendt Christensen, whose car was caught on camera as Chinese scholar Yingying Zhang entered it.

The camera wasn’t put in place to monitor the intersection at which Ms. Zhang was abducted. Its purpose was to monitor the adjacent parking garage. The footage was used in conjunction with footage from a camera at an MTD bus stop to help identify Christensen’s Saturn Astra with its cracked hub cap.

Christensen’s whereabouts from that day were then tracked by security cameras operated by campus, apartment buildings and businesses.

In 2013, a man followed a woman into Allen Hall, grabbed her and sexually assaulted her, she later testified. After the crime was reported, security camera footage captured the image of Gregory Hayes, who was quickly identified. Within an hour, he was being questioned at his Urbana home.

The cameras are used to improve traffic patterns after large events like football games and concerts. They can help determine fault in traffic accidents. They aid in resolving incidents at Illinois football games, where operators can respond to reports with cameras inside the stadium.

But Kavanaugh’s lucky catch on Christmas Eve does illustrate a key fact about campus security cameras. Whether you’re stumbling out of Kam’s, walking across the Quad at night, enjoying a game at Memorial Stadium, or simply pulling out of a parking garage, your image is likely to be captured and recorded.

Three large televisions are mounted on the wall of the UI’s telecommunications office displaying security footage from across campus, but most of the viewing of that video is done at the desks that line the room, where workers can easily access any time and date from the last 30 days from any of the cameras.

At all hours of the day, someone is present to operate and toggle between those cameras.

The push for cameras on campus began in 2008, when a few dozen were added. Since then, the addition has been fast, with around 200 cameras added each year. Since 2008, around $4 million has been spent on hardware, software and staff time, according to UI police communications Director Pat Wade.

“It’s quite a fascinating science to figure out where they should go,” UI police Lt. Joseph McCullough said. “We work with our crime analysts, we work with other university entities to figure out high-profile areas and less-traveled areas to strategically place them where we want to not only go back and figure out evidence of crimes, but our telecommunicators at the front desk are really practiced in real-time operation of them.

“So if we have an issue or an in-progress call, they’re able to get cameras focused if not at what is the event going on, at least in the vicinity so they can provide officers that are responding to the call with real and adequate information.”

The cameras may be numerous on the 2.8-square mile campus, but Wade and Kavanaugh said they’re not as ubiquitous as one might think. Most of them are pointed at doorways, including at residence halls like the one that caught Hayes, parking garages, intersections, and other high-traffic areas, they said.

In conjunction with the ACLU, a policy was put in place that covers how cameras can be used and where they’re pointed. Audio recordings are prohibited. Cameras can’t be pointed into private areas, like dorm rooms or bathrooms or through windows of private residences.

Unless requested by legal counsel or the chief of police, footage can be kept for no longer than 120 days, although it automatically falls off the server after 30.

The guidelines are policed by the Office of the Chief Information Officer, who, the policy states, “will periodically review the information technology security on security camera systems and provide the chief of police with a summary of its findings and recommendations.”

“We think the guidelines are a good thing,” said Ed Yohnka, director of communications and public policy for the ACLU of Illinois. “What we have seen far too often is just an explosion in the use of surveillance systems without any guidelines, without any regulations, modest or otherwise, built around them. So the importance of putting them in up front and putting those policies in place are a critical thing.”

Any form of surveillance, though, is always a concern for the ACLU, especially with ever-advancing technology becoming available.

Under the UI’s current technology, that type of surveillance would be either impossible or highly cumbersome.

“I think in the general case, it can’t be abused,” said John Bambenek, a cybersecurity expert and UI lecturer. “There are some places on campus that I’d be wary of having security cameras ... where somebody’s not paying attention to who’s looking.

“The counseling center, the women’s resource center, the advocacy organizations that are helping students who are having various concerns. I’d be concerned with someone poking their head into those cameras and just looking for the sake of looking.”

What would be more concerning, Bambenek and Yohnka said, would be the implementation of facial recognition technology, which could theoretically track students by matching their image on-camera to their I-Card photos.

At a 2014 Champaign City Council meeting, though, since-retired UI Police Chief Jeff Christensen said his department had looked at some form of facial recognition technology, but among other factors, it was too costly at the time.

McCullough said the use of facial recognition technology isn’t being discussed now and wouldn’t fall under the purview of the security cameras’ use.

“The push for blanket surveillance with facial recognition right now is in mostly autocratic regimes and those that do not share our same sense of human rights,” Bambenek said.

The possible use cases, though, can be tempting. Brendt Christensen’s identity, for example, theoretically could have been determined in a much quicker fashion by using facial recognition technology.

“Let’s say someone gets kidnapped at 1 p.m., it’s reported to the police at 2 p.m.,” Bambenek said. “They run to the cameras, they identify the car, they use facial recognition to identify the suspect. By 2:15, 2:30, they track his movements all the way out, and they know, is he still on campus? Did he leave campus? And if he left campus, you know where he’s going.

“And now, in a very short timeframe, you not only know something bad has happened, you know who is involved, where they went, and where they’re going.”

But technology that allows the tracking of subjects at all times is rife for abuse, according to Bambenek and Yohnka.

Even the addition of cameras without added surveillance technology leads to questions about the balance between privacy and safety.

When UI police added cameras to city property in 2014 and 2016, they first had to go through the city council. While discomfort regarding the cameras was expressed by the majority of council members, most agreed that the positives outweighed the negatives. Votes passed by margins of 7-2 and 7-1.

Both times, Tom Bruno voted in the dissent.

He has concerns about the government or the university monitoring events like protests. While the UI has expressed it wouldn’t do this, his concerns aren’t completely unfounded.

In Chicago, police were accused of using cell site simulators, which act as cellphone towers for the purpose of capturing location data from phones, at Black Lives Matter protests.

Bruno’s objections, though, go into situations that are much more innocuous.

“Maybe you’re 19 years old and young at heart, and you’re walking down the Quad at 11 p.m. with a person you’ve fallen in love with and you just want to kiss,” he said. “And you’re kissing, but you’re thinking, ‘I wonder if someone at the public safety building is watching me kiss under the moonlight at the Quad.’ It takes a little of the charm out of it. And I don’t want to live under that government surveillance.”

As expressed by most Champaign council members, though, the safety outweighs any infringement, real or perceived, on privacy.

If Yohnka and the ACLU had their way, he said, security cameras would exist, but they wouldn’t be quite so numerous.

“I just think that where we are in many communities is we’ve probably gone beyond that point to the point where there is enhanced capability for broad surveillance.”

The issue, Yohnka knows, isn’t black and white. It’s one the ACLU grapples with constantly amidst the ever-changing and exponentially advancing technology.

More than ever, the argument pits privacy against the safety provided by cameras, like the ones that led to the arrests of Hayes and Christensen and the ones that may have helped Kavanaugh save a life on that Christmas Eve night.