Weigh in. Submit a letter to the editor.

Nor would they explain Tuesday the reason for the school board commissioning a $750-a-day outside consultant to look into “professional services related to oversight and assistance to the business office,” which is headed up by CFO Tom Lockman.

In an email Tuesday, district spokesman John Lyday offered the same response to News-Gazette Media questions about both issues, writing: “The District has not commented on personnel issues in the past and does not intend to do so at this time.”

An investigation of the 81 users of district purchasing cards by Chicago-based Sikich, obtained Monday by News-Gazette Media, decried an 'ever-present culture of hospitality and gift giving.'

A day after the release of the 14-page audit of district P-card expenses by Chicago-based Sikich, Lockman revealed to News-Gazette Media that he’d been placed on leave by Unit 4.

He said he was given no official explanation why by district officials but believes his role in calling attention to P-card use was a factor.

“It is clear that this has been done in retaliation for providing information relating to the conduct of the superintendent and others to law enforcement, Sikich and the (school) board,” he told News-Gazette Media on Tuesday.

Lockman said he retained counsel “more than 18 months ago” and that should the district take further action regarding his employment, he and his attorney “would have to consider all possible options.”

The decision to place Lockman on leave comes after what he described as multiple disputes between the Unit 4 business office and district employees, including Superintendent Susan Zola, over the potential misuse of district money. The discussion largely centered around the lack of a formal policy about the use of district-issued credit cards, also known as purchasing cards, or “P-cards.”

At least one case attracted the attention of Illinois State Police, who, following an investigation, sent details of Assistant Superintendent Angela Ward’s credit-card use — including more than $2,000 in personal food purchases — to the state appellate prosecutor to consider for criminal charges.

But Ward’s P-card expenses were only a fraction of an issue Lockman spoke in detail about in a May News-Gazette Media analysis of 81 users’ transactions over a 19-month period.

In that report, Lockman referred to a letter sent to school board members in January, which Chris Kloeppel, the president at the time, said prompted the commissioning of the Sikich audit.

In that letter, two of Lockman’s colleagues in the Unit 4 business office, Michele Johnson and Seth Hansen, shared their ongoing concerns about P-card use.

“Given some of the practices that continue to exist or have expanded despite repeated statements of concern from the business office, as well as requests from the business office to enforce standards of accountability ... which are denied or undermined, we are concerned about the district’s ability to maintain the level of fiscal responsibility ... stakeholders expect.”

Among the other concerns and recommendations included in the eight-page letter sent to board members:

— A recommendation from Lockman to Zola in August 2018 that the district’s P-card expense logs “be included with the Bill’s and Treasurer’s Report that is presented for board approval” and is later made public.

But that recommendation wasn’t heeded. “In addition to being contrary to the guidance provided by district auditors,” the letter stated, the logs’ exclusion “is inconsistent with the district’s efforts to make information accessible to the public.”

— Concerns about gift card purchases, which totaled $22,676 in the district’s 2018 fiscal year. “The distribution to staff in some cases has become routine enough that the business office is reviewing whether accepting them should ... be considered a taxable benefit,” the letter said.

— Referring to the process of Ward reimbursing the business office for personal purchases, the letter stated that the situation “encapsulates well several of the practical challenges — as well as additional work — that the business office faces in managing the current P-card program, many of which would be avoided if standard expectations were clear and basic measures of accountability were able to be enforced.”

The letter led to the audit by Sikich, which came up with similar recommendations to the ones school board members are now considering implementing. Those include a formal policy and more oversight. 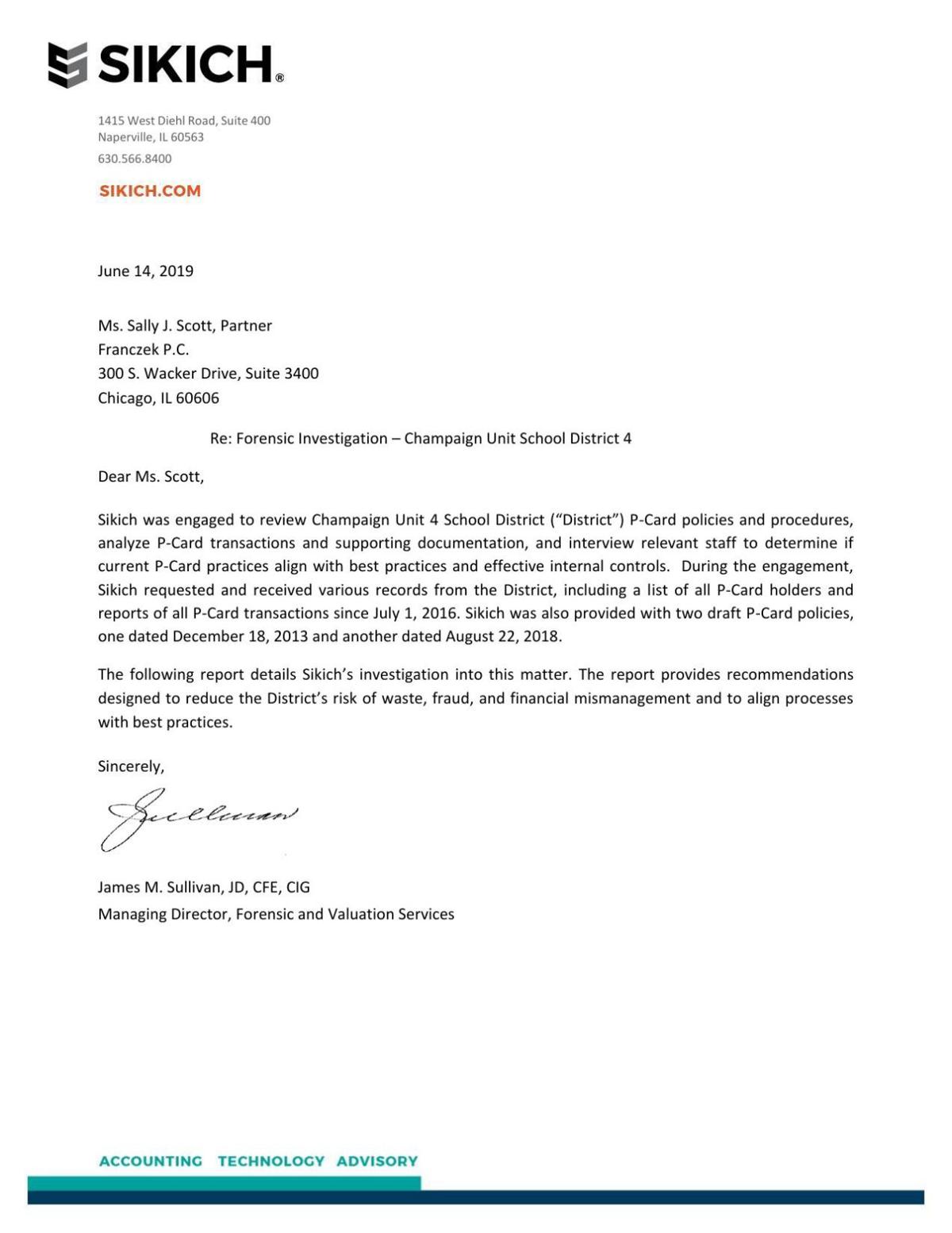 Of the Sikich report, Zola said in a statement Tuesday: “We concur with the findings and recommendations of the Sikich report. On June 8th, 2019, the Unit 4 Board of Education reviewed policies and procedures that provide structure and address the 12 recommendations contained in Sikich’s report. The Board directed administration to begin operating with the proposed policy and procedures prior to their formal approval and we have done so.”

District officials would not, however, discuss details of the decision to hire Guy M. Cahill & Associates last month at $750 a day for consulting services related to the business office.

Lockman, a 2000 Champaign Central grad and former school board member, was hired as the district’s attorney in 2013. Two years later, he added the role of overseeing the business office.

The memos, obtained via an open-records request, reveal prior criticism of Tom Lockman, who has been placed on indefinite administrative leave, for 'poor planning' and behavior.