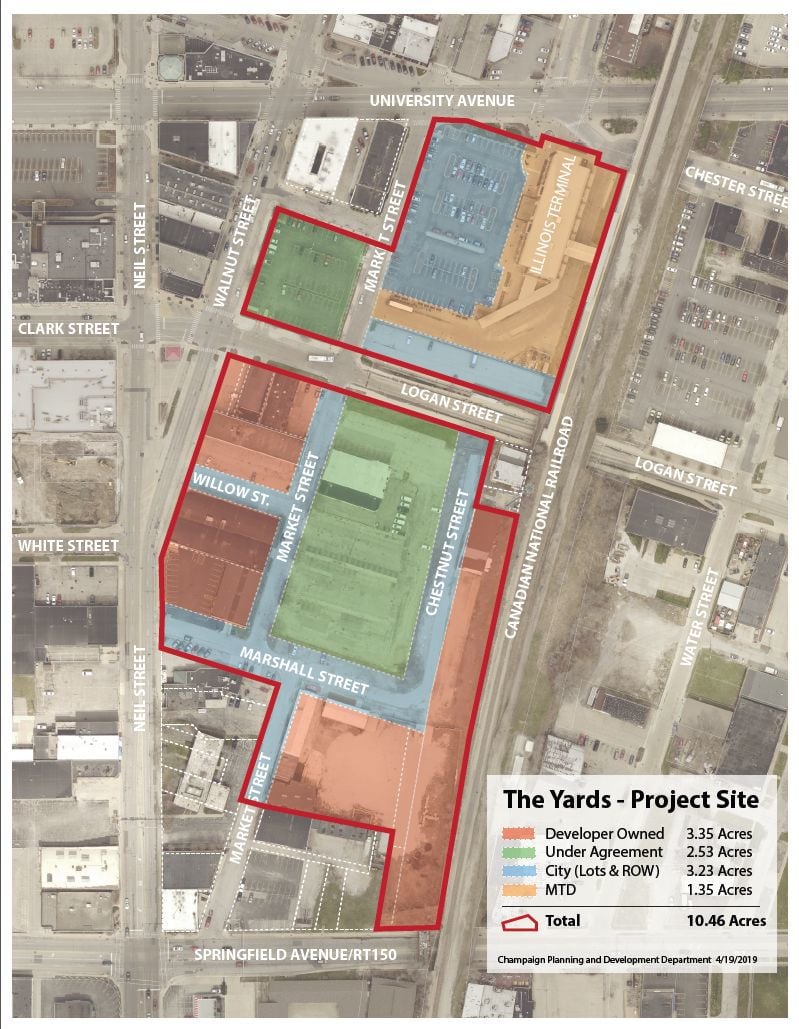 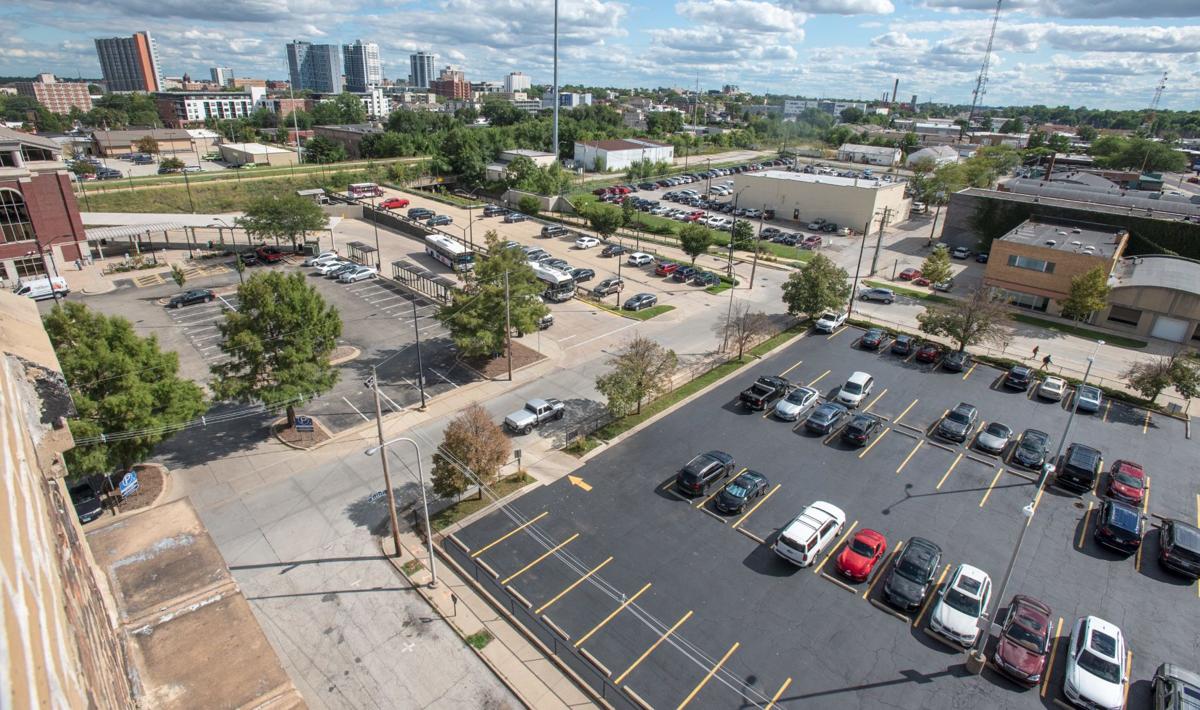 CHAMPAIGN — The city of Champaign is considering contributing $35 million over 18 years to the $250 million project known as The Yards.

Located on the southeast edge of downtown, it would include an expansion of the Illinois Terminal, a 5,000-seat Division I hockey arena, convention space for up to 1,000 people, a 180-room upscale hotel, 90,000 square feet of office and retail space, and two parking structures with room for 789 parking spaces.

The project could transform the area south of the Illinois Terminal, but according to their financial analysis, in 10 years, it could lose $24 million without incentives.

So at Tuesday's city council meeting, the city will present a "preliminary negotiated incentive package" that includes a combination of tax-increment-financing bonds and reimbursements; land; sewer work; and hotel-motel tax reimbursements.

"While the incentive package that's being proposed is significant, it's consistent with the negotiating principles that council approved back on September 11," said Bruce Knight, the city's planning and development director. At that study session, the council said the project should bring in enough tax revenue directly to pay for any city assistance.

Knight said that goal has been achieved, with the project expected to bring in $51.3 million in various tax revenues over the next 18 years.

The largest portion of the $35 million incentive package would be in the form of $16.4 to $18 million in TIF bonds, used primarily to pay the developers for the parking structures they would build.

"And so we will give them the land that we own that would go on to the project in exchange for them to sort of give us back the land that the public parking structures that get built will sit on."

The bonds would only be issued after the project is completed and assessed, and they would be based on 80 percent of the TIF revenue generated by the increased value of the property.

The bonds would then be paid back over the remaining life of the Downtown Fringe TIF district the project is in, or in about 18 years.

The TIF district would also have to pay an additional $6.4 million in interest and issuance costs, according to the city.

On top of that, the developers would be reimbursed up to $7 million they would normally have to pay to the TIF fund based off the property's higher assessed value.

The TIF district would also issue $3 million in bonds for sewer work, which Knight said is needed for more than just The Yards.

"It will run over to the Second Street pump station at Second and Springfield," Knight said. "That pump station has a lot of unused capacity at this point in time. ... Virtually all of downtown is served by one sanitary sewer that runs down Logan Street, and it's near capacity. So really, we need this to continue downtown's redevelopment in general."

The rest of the incentive package would come in the form of hotel-motel tax reimbursements over 15 years.

That would include the hotel at the Yards, the Hyatt Place at Neil, Main and Church streets, and the Aloft hotel coming to 401 N. Neil St., C.

That brings the total cost to the city to about $41.3 million, according to Knight's report to the council.

No tax increase for residents

But the TIF bonds would only be issued based on the TIF revenue generated, and besides the new hotel-motel taxes for Hyatt Place and Aloft, there should be no new taxes, Knight said.

"The only small aspect of a tax increase is that business development district and the 1 percent additional hotel-motel sales tax on visitors that stay in those hotels," Knight said. "But for the general public and in Champaign, there's no tax increases involved in any of this."

And The Yards would continue to pay other taxes, such as those on sales and food and beverages, as well as 2 percent of the hotel-motel tax.

According to an economic impact assessment from the developers, the project will "create or retain 1,245 full-time equivalent permanent jobs in Champaign County and generate over $112 million (2019 dollars) of annual economic activity for Champaign County households and businesses."

If the city council indicates Tuesday that it likes where the incentive package is heading, Knight said he expects negotiations to continue for at least two or three more months.

Another study session could come in July or August to review the finalized agreement, with final approval in August or September.

One of the sticking points right now appears to be whether the parking garages will be large enough.

The two structures would have 789 spaces, but the developers' parking consultant said that peak demand on the weekends when the arena is being used would be 1,883 spaces.

And that didn't include 275 spaces currently used by Christie Clinic employees who would be expected to use the parking garage.

"City staff have expressed concerns to the developer that the number of parking spaces in the proposed structures appears insufficient to accommodate parking demand/usage during peak times based on the numbers provided," Knight wrote in his report to the council.

He added that Christie and the developers are still negotiating their agreement, which could allow the developers to lease local parking lots during busy nights and weekends.

Knight also said the incentive package would have to be renegotiated if the University of Illinois doesn't add a Division I hockey team, which it is currently raising funds for and hopes to announce its plans for later this year.

Despite these potential problems, Knight is enthusiastic about the project.

"It results in a development that is going to have a significant positive economic impact on the community as a whole and really advances our partnership with the University of Illinois," he said.

MTD gets $17.275 million federal grant for Illinois Terminal expansion as part of The Yards

The grant from the U.S. Department of Transportation will cover most of the $25 million that the agency had been planning to spend on the expansion, Managing Director Karl Gnadt said.