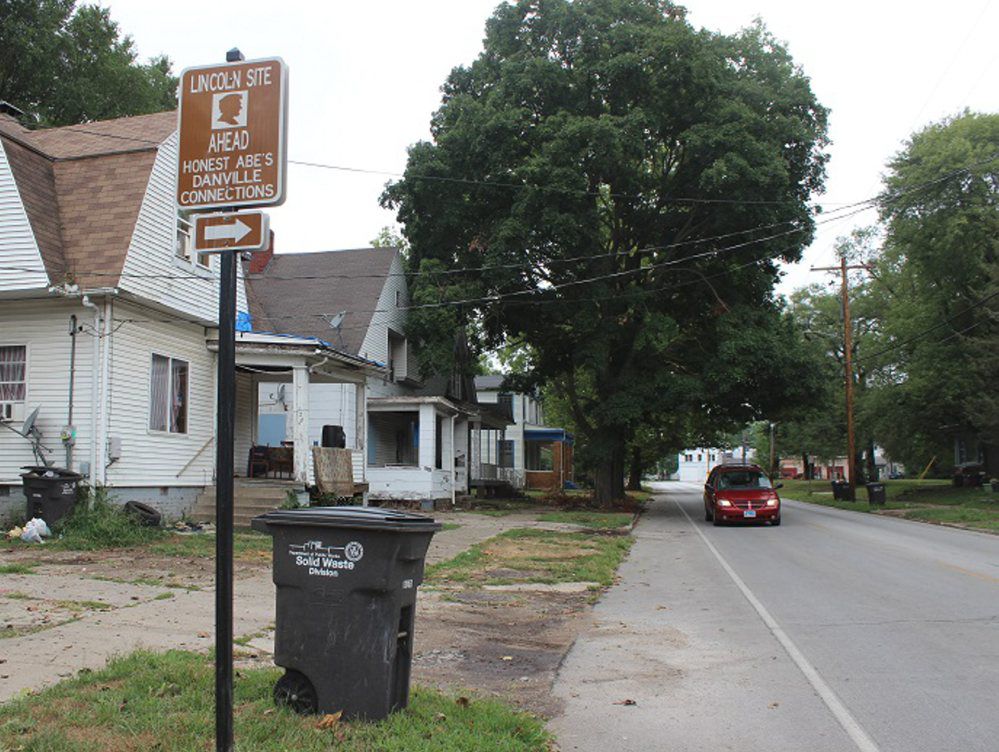 This section of North Logan Avenue west of downtown Danville, shown Wednesday, Aug. 21, 2019, will be part of anew $50 million medical campus that Carle plans to build over the next two years.

Caleb Miller, Carle's senior vice president of primary-care and specialty-care services, talks about the planned new facility that will be built in the next two years on 17 acres in a blighted neighborhood west of downtown Danville at a press conference announcing it Wednesday, Aug. 21, 2019, at the city council chambers in Danville.

This section of North Logan Avenue west of downtown Danville, shown Wednesday, Aug. 21, 2019, will be part of anew $50 million medical campus that Carle plans to build over the next two years.

Caleb Miller, Carle's senior vice president of primary-care and specialty-care services, talks about the planned new facility that will be built in the next two years on 17 acres in a blighted neighborhood west of downtown Danville at a press conference announcing it Wednesday, Aug. 21, 2019, at the city council chambers in Danville.

DANVILLE — The new medical facility that Carle plans to build overlooking Ellsworth Park in a blighted neighborhood west of Danville’s downtown has some city officials calling the $50 million investment “a game changer” for the center of the city.

“We all know health care is a key cornerstone, so this really is a key turning point for our city,” said Vicki Haugen, president of Vermilion Advantage, during Tuesday’s announcement of the Carle project that’s been in the planning and land acquisition stage for nearly two years.

The plans, which are still evolving based on final land acquisitions and zoning and state regulatory approvals, entail construction of a new medical center and parking lot in the west downtown area — from Logan Avenue to Robinson Street and North Street to Madison Street — that will consolidate its existing outpatient services in Danville into a single, multipurpose campus with primary, surgical and specialty care.

“We want to keep care local,” he said Tuesday in the Danville City Council chambers while standing next to a conceptual drawing of the new development. “We really do appreciate the community support we have received. We are very excited about this endeavor.”

Carle is envisioning a yet-to-be-designed multi-story building that sits toward the west side of the site, overlooking the east edge of Ellsworth Park, which sits at a lower elevation along the North Fork River. The 17-acre site will displace roughly 60 properties — including a few owner-occupied homes, a larger number of landlord-owned residential properties and a few commercial buildings as well as vacant lots, which are mostly city-owned as the result of its demolition programin a neighborhood that has struggled with blight and crime for more than a decade.

Leon’s Diner, a long-time eatery on North Logan Avenue, will also remain and will be on the northwest corner of the development.

Carle worked to acquire many of the properties through the Vermilion County Land Bank, a quasi-public entity created by local municipalities — including Vermilion County and the city of Danville — to acquire, manage, and re-purpose vacant, abandoned and foreclosed properties.

Haugen said this project has “proven the value of such a tool.”

She said the last time the larger downtown area of Danville has had a project of this magnitude dates back to the development of Town Centre, more than 20 years ago. At its current facilities, she said, Carle has about 45,000 patient visits a year and employs about 200 people.

Danville Mayor Rickey Williams Jr. said he’s excited because this project will help revitalize the west downtown neighborhood and help adjacent residential neighborhoods as well. He said he’s also excited about there being high-paying, high-caliber jobs at this health care facility — and the plans to develop it in a way that takes advantage of one of the city’s natural areas, Ellsworth Park, which the city plans to improve.

“We are thrilled about this development,” said Williams, who lives right across Madison Street from the proposed development.

Discussions between Carle and local officials with Vermilion Advantage and the city first began in October 2017, Haugen said. Five sites were originally considered, and Carle eventually settled on this one, which is within a block of U.S. 150 — one of the main corridors into the city and a direct route to the Martin Luther King Jr. exit on Interstate 74.

The project footprint currently stretches from Robinson Street to the west side of Logan Avenue, requiring a section of Logan Avenue to be vacated. That’s a decision that would have to first be approved by the city, as will all zoning changes.

OSF Sacred Heart Medical Center and the Polyclinic are both on Logan Avenue as well, but several blocks north of this planned project, which would change how traffic from U.S. 150 accesses those facilities.

Miller said this project would make Carle more efficient by consolidating all of its personnel and services in one location.

Carle said it plans to put up for sale its 2300 N. Vermilion St. facility, where some of its specialty services are now located. Carle Foundation is listed on Vermilion County property records as the owner of that 7.6-acre property, which is currently tax-exempt.

And Carle said it will eventually end its lease at its other facility on Fairchild Street and relocate its Arrow Ambulance service, currently at 812 N. Franklin St., Danville, to the new property as well, possibly in a building separate from the new medical center.

In 2006, Carle agreed to lease the 33,000-square-foot former Shop Rite building on Fairchild Street and move its primary care services from its North Vermilion facility to that location.

At that time, the owner of the Fairchild Street site was Danville Medical Facilities Development — an affiliate of Vermilion Development Corp., which itself was an affiliate of Mervis Industries — and it redeveloped the former grocery store specifically for its new tenant, Carle.

Within the city’s Midtown Tax Increment Financing district, the city agreed to reimburse Danville Medical 80 percent of its property taxes for 15 years. That reimbursement will come to an end in 2022.

According to county GIS records, the 2018 property tax bill for that 3.5-acre property on Fairchild totaled $325,474.

Danville Medical sold that property within a few years after Carle moved in, according to county property tax records, and in April 2018, it was sold for $12 million to 311 Properties LLC of Pensacola, Fla.

Carle officials on Tuesday said their lease with that property owner would be coming to an end, and their hope is to have the new facility completed by the end of 2021.