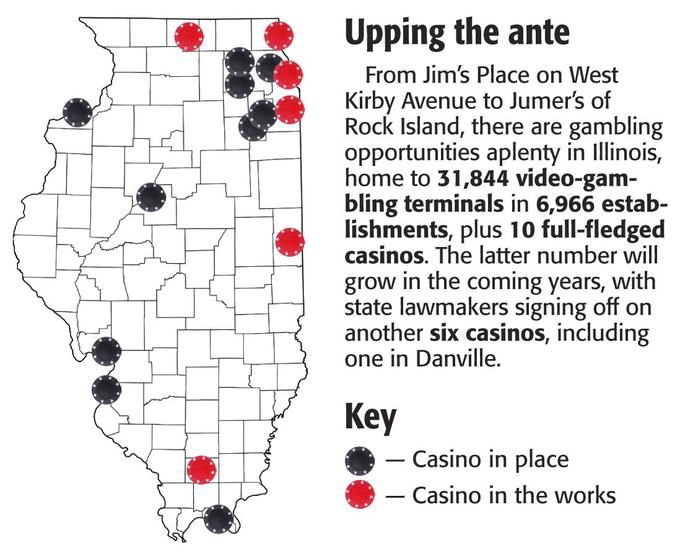 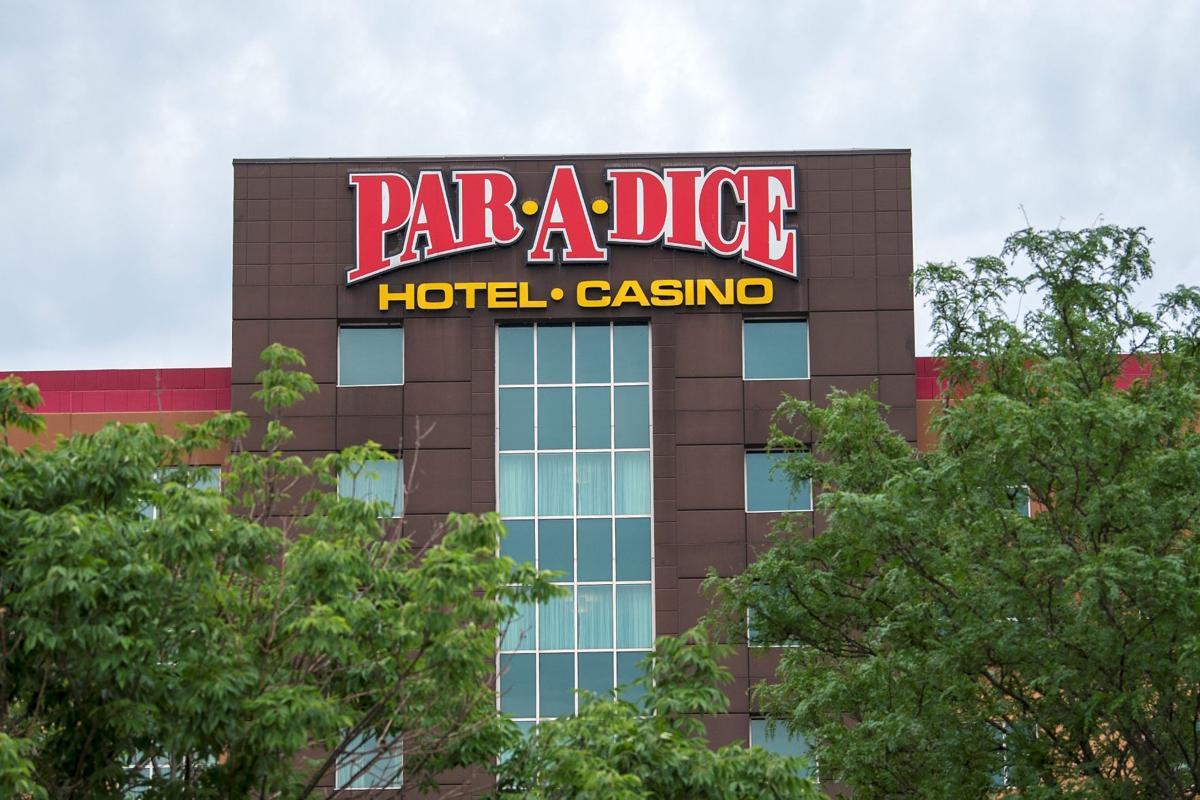 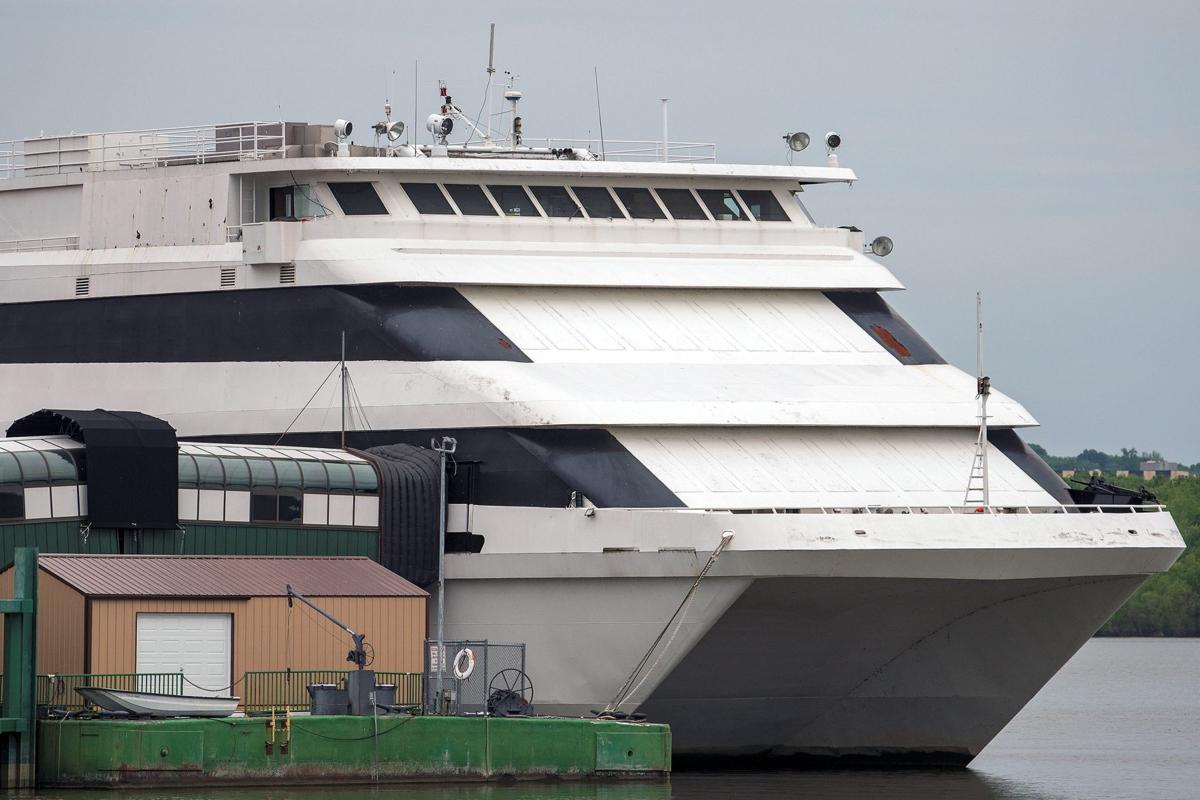 DANVILLE — With video gaming expansion in the cards and Indiana working on opening a large facility across the state line in Terre Haute, building a casino in Danville is a bigger gamble now than ever.

"If I was a betting man, I think Danville will probably see a casino, but the question is: How lucrative will it be?" said Tom Swoik, who's been involved in Illinois' gaming industry for 25 years, first with the Illinois Gaming Board and now as executive director of the Illinois Casino Gaming Association, which represents nine of the state's 10 casinos.

"There are a lot of interesting things in this legislation that will affect Danville and the interest for a casino there."

Swoik's gut tells him it would be surprising if all six new casinos approved by the Legislature two weeks ago actually open in Illinois. The major expansion of gaming in the state included six new licenses — for land-based casinos in Danville, downtown Chicago, Waukegan, Rockford and the south Chicago suburbs, plus one riverboat operation in Williamson County in southern Illinois.

"Potentially, maybe one or two don't" open, said Swoik, who has grown familiar with expansion pushes over the last decade, testifying numerous times in Springfield about the issue, often on the opposite side as former Danville Mayor Scott Eisenhauer.

"We were opposed to the bill and have been for the past 17 years," Swoik said of the casinos he represents — nine of the 10 currently operating in Illinois, with the lone exception being East Peoria's Par-A-Dice. (Representatives for it too were against expansion).

This time around, however, new Democratic Gov. J.B. Pritzker said he intends to sign the bill. That could come by the end of the month, according to state Sen. Scott Bennett, D-Champaign, who supported the legislation and a long-awaited casino license for Danville, where state and local politicians have lobbied for a casino for years.

In 2018, the Argosy riverboat casino in Alton generated the smallest share of local tax revenue of Illinois' casinos — $2.8 million. The nearest casino to Danville, the Par-A-Dice, generated $4.5 million for local government. The Rivers casino in Des Plaines took in the largest local share last year — $25 million.

Retired state Rep. Bill Black pushed for casino legislation stretching back to 2007 — when the Danville City Council passed a resolution asking the legislature to include a license for their city in any casino expansion.

"The only concern I have, things have changed in 12 years," Black said. "The difference now will be finding a developer who is willing to put together a package of several million dollars to build a casino in Danville.

"Video gaming has hurt casino profits. You don't know what Terre Haute will do, but a lot of things have changed. ... (Danville) may sign a developer tomorrow, and they may never find a developer. Who knows?"

Indiana has given the green light for a casino license in Gary, to be transferred to Terre Haute, which is about an hour's drive to the southeast of Danville. But Vigo County voters must give their blessing first, and at this point, that referendum is slated for the fall.

Bennett said Terre Haute is no guarantee at this point, and even if it were, a Danville casino is still viable.

The most recent legislation came seven years after another gambling expansion bill cleared both houses of the Illinois Legislature, only to be vetoed by then-Gov. Pat Quinn. That bill called for five new casinos — in Danville, Chicago, Rockford, Park City and the south Chicago suburbs.

"We would be better off if Quinn had signed, because we wouldn't have this competition," Bennett said of Indiana's plans, adding that according to original projections, the majority of the revenue generated at a Danville casino would have come from Indiana. "But any scenario where money is coming in from out of state is the best of all worlds."

A market study privately funded in Danville in 2007 projected that up to 65 percent of the estimated $140 million in revenue generated by a casino in the Illinois border town would come from out-of-state visitors, mostly Indiana, where the nearest casino at the time was about two hours from Danville.

As the landscape changed through the years, Eisenhauer said those projections continued to be re-evaluated, particularly after video gaming was officially introduced in Illinois.

The big issue with video gaming, Eisenhauer said, was whether someone from Charleston, for example, would come to a casino in Danville if they could have a similar experience with video gaming in their own community. Then, as Indiana began to seriously consider a casino in Terre Haute, they eventually cut all projections across the board by about 45 percent, revenue projections included.

"I still think there will be considerable interest in a Danville license, because of location, proximity to Indiana," Eisenhauer said, adding that prior to Quinn's veto in 2012, there were seven developers who met with him and other local officials about a Danville casino.

"That's not a done deal," Eisenhauer said of a Terre Haute casino. "And certainly if it's not approved by voters, that will bring even more interest to the table."

Existing casino owners in Illinois have never favored gaming expansion, arguing that the state is already over-saturated. Plus, the recent legislation further expands video gaming, allowing even more machines than the current 31,844 terminals at existing sites — up to 10 machines at large truck stops and six machines at all other sites, up from five.

The new bill also allows slots and table games at race tracks and adds legalized sports betting into the mix.

"This bill is absolutely crazy with expansion," Swoik said, adding that in the past his association and the casinos it represents have not objected to the most enticing part of this expansion — a Chicago casino.

But even for the new casino locations outside Chicago, he said, there's a $250,000 non-refundable state license application fee and a $17,500 fee for each casino position. (That's $35 million for the maximum 2,000 positions allowed per casino and $17.5 million for half that number).

That's all in addition to the major costs of acquiring a site and building a casino, making licenses in a smaller market like Danville less lucrative an opportunity, according to Swoik.

"It's been such an unstable market, and it's not a very business-friendly state for casinos," he said, adding that the Illinois casino industry has been down about 3 million visitors per year since the state allowed video gaming in 2009.

Swoik said he's not sure whether there will be interest in expansion outside the Chicago market from the bigger casino companies already at play in Illinois. Those include Caesars Entertainment (owns Harrah's Joliet and Harrah's Metropolis), Penn National Gaming (has casinos in Alton, Aurora and Joliet), and Boyd Gaming (East Peoria's Par-A-Dice).

In 2018, the East Peoria casino generated $76.2 million in adjusted gross revenue and paid out nearly $19 million in taxes. That's before paying employees or buying as much as a deck of cards, Swoik said.

And when building a new casino, costs are frequently spread out over the next 20 years. So it may be some time before an operation actually begins operating in the black, he added.

"It's not like it's going to be a super money maker for an operator," he said.

So, a massive Caesars-brand Harrah's complex may not be what Danville ends up with. But an operation here can still turn a profit, Swoik added; it just may be more along the lines of a $10 million investment than $100 million.

"I could see a company building a casino in Danville, but how lucrative that market will be compared to some other markets is the question," he said. "You may see some smaller, lesser-known companies coming in. I'm not saying a casino won't be built. There's still good potential it's going to happen."

Bennett said there's no question that a Danville casino won't look like what will be constructed in Chicago. Legislation allows up to 2,000 gaming positions for casinos outside the Chicago area, but Bennett said a Danville facility is likely going to be smaller, especially if there's competition in Terre Haute.

But even with 1,000 positions in Danville, there's a big benefit to the community, Bennett said.

"A thousand gaming position is a lot of jobs," he said. "It's still a very net positive for the community in a million ways, but it's going to be smaller."

The maximum number of positions for current casinos is 1,200, but not all go that high. And Swoik said some locations have recently reduced their overall number by a couple hundred or so.

Vickie Haugen, CEO of Vermilion Advantage, has worked on a potential casino development in Danville for more than a decade.

"We've never been to this point before," she said.

Anticipating Pritzker's signature, Haugen said her office, in conjunction with Mayor Rickey Williams Jr., has lined up a professional to assist in navigating the site and development process that will kick into high gear soon. Step one will be putting out a request for proposals.

Ultimately, Bennett said, the city of Danville will be the one giving its blessing to a particular developer, who must also be approved by the Illinois Gaming Board.

"There's a lot of deference in the bill to the communities getting these licenses," he said. "The city will have a lot of say in terms of which application goes forward, and the gaming board will work with communities on this."

Within 120 days, each new casino location must submit to the gaming board a development proposal, along with a site, already worked out between the municipality and developer.

"It's going to be a quick process," said Haugen, who believes there will be plenty of interest in a casino license in Danville, "based on the inquiries already since the legislation was approved."

Williams said he has already had at least two email exchanges with potential developers, but they're waiting for the governor's signature.

The mayor anticipates Danville's casino being located along the Interstate 74 corridor.

Swoik doesn't anticipate multiple applications — not with a $250,000 nonrefundable price tag — for all five casino licenses. He said the projections he's seen from those involved with the legislation are overestimating how much will be generated by application fees alone.

"I think the state has way overestimated what this will generate in a lot of areas, but specifically in that area," he said.

Sen. Terry Link, D-Indiana Creek, who sponsored Senate Bill 690 and has been working on gaming expansion for 20 years, has estimated that the legislation could generate more than $12 billion for the state over six years.

Swoik said cities getting new licenses also haven't put a lot of thought into how video gaming could be negatively impacted by casino expansion.

Rockford, he said, has the second highest number of video gaming machines as it is, around 150 sites. He said many of those establishments were hit hard by the ban on smoking. And now this. "So that will be a side effect," he said.

Mayor Rickey Williams Jr. and Vicki Haugen, CEO and president of Vermilion Advantage, have been working on a request for proposals since an expansion of gambling within the state was approved last month.