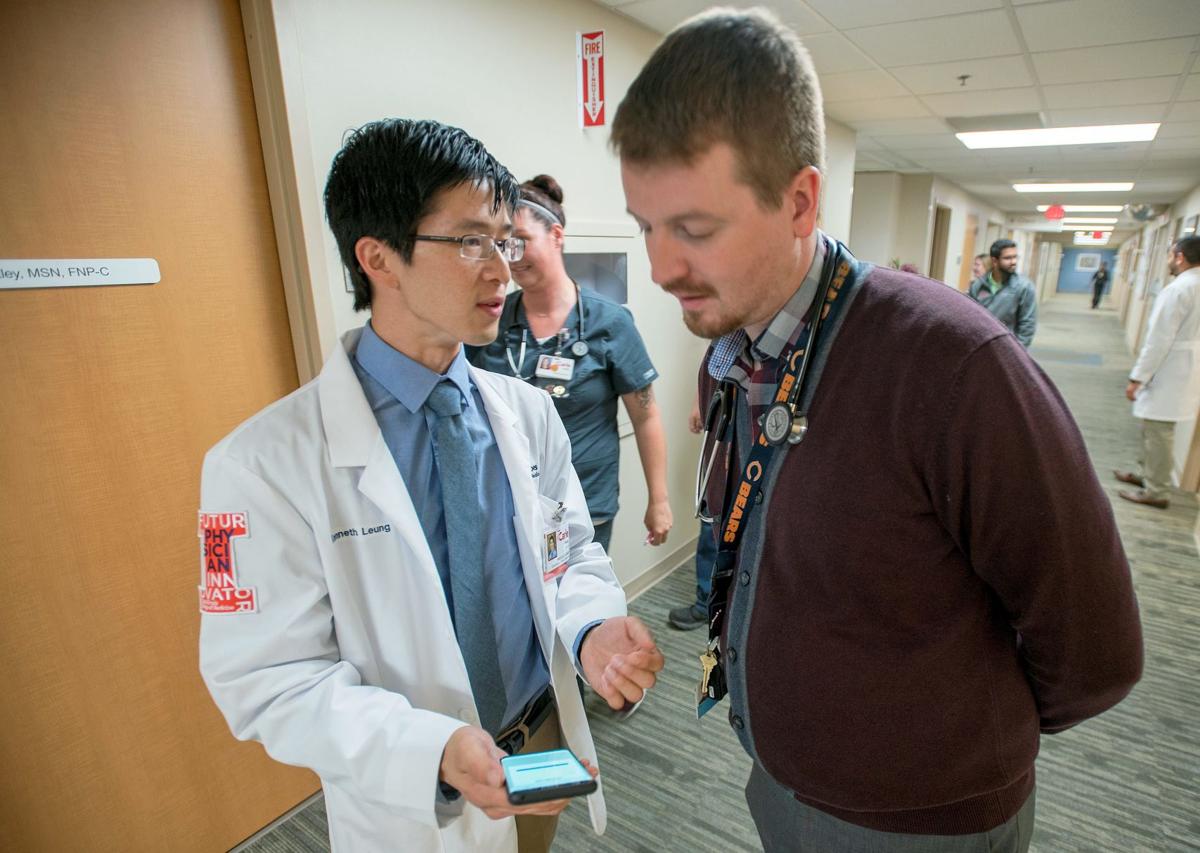 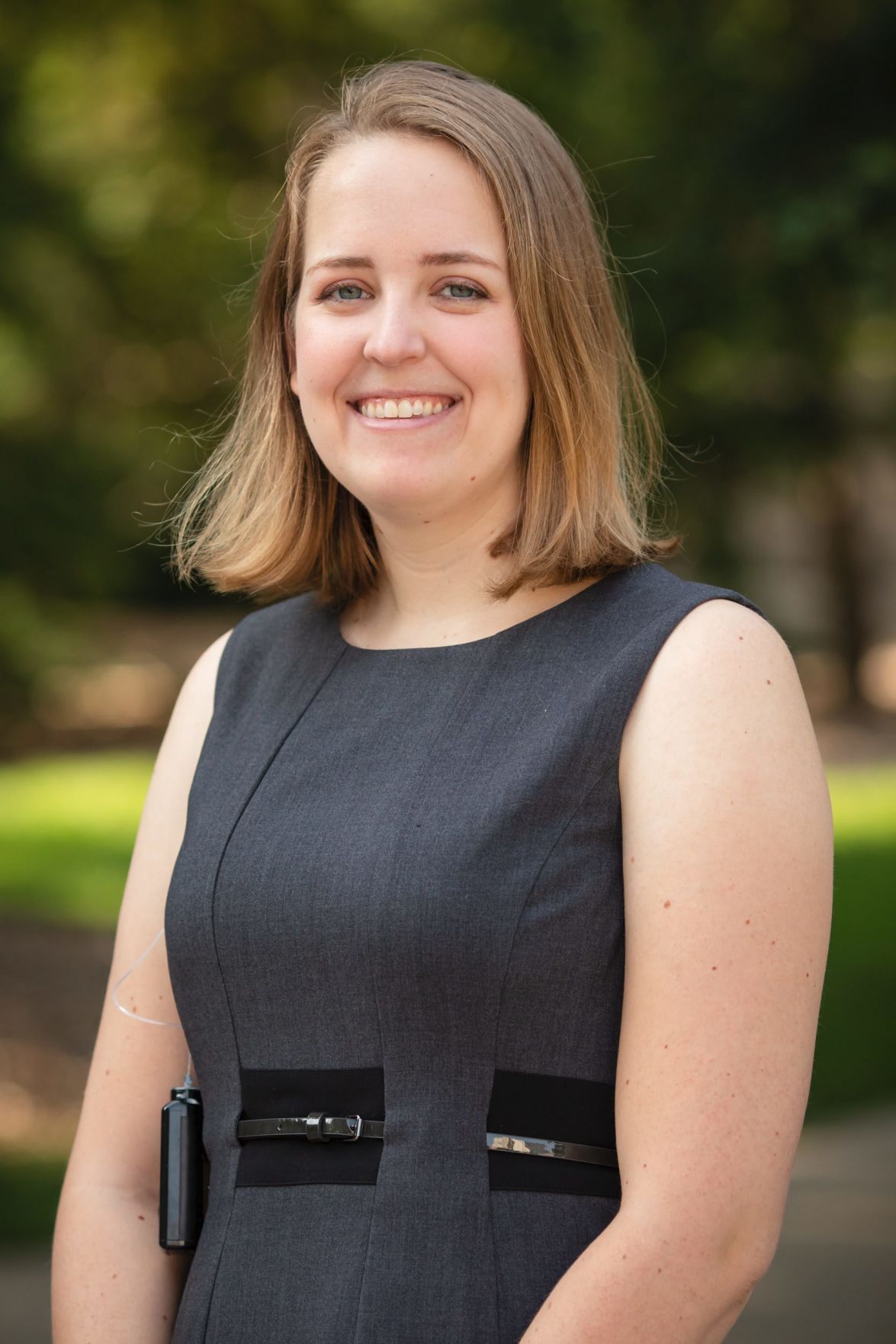 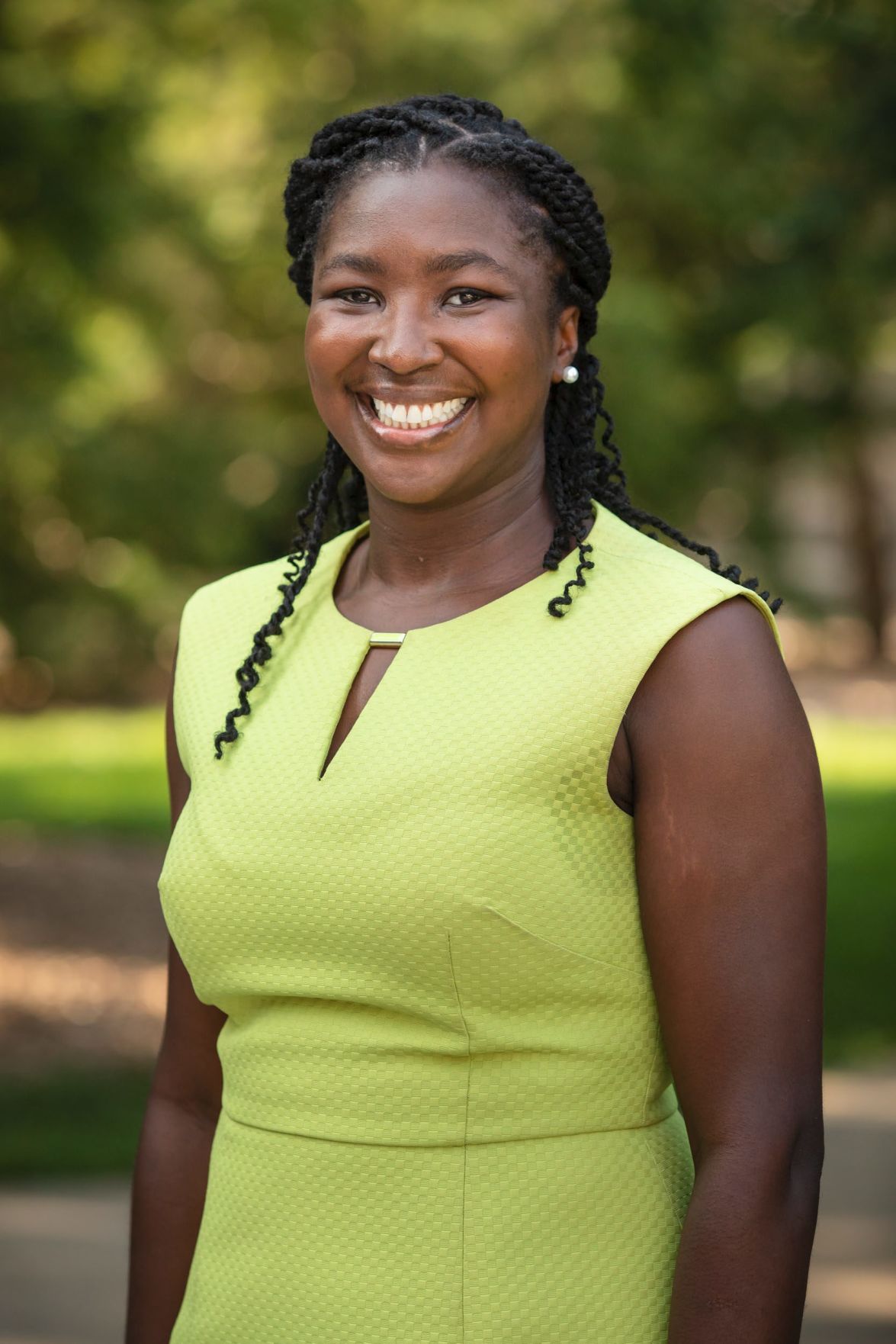 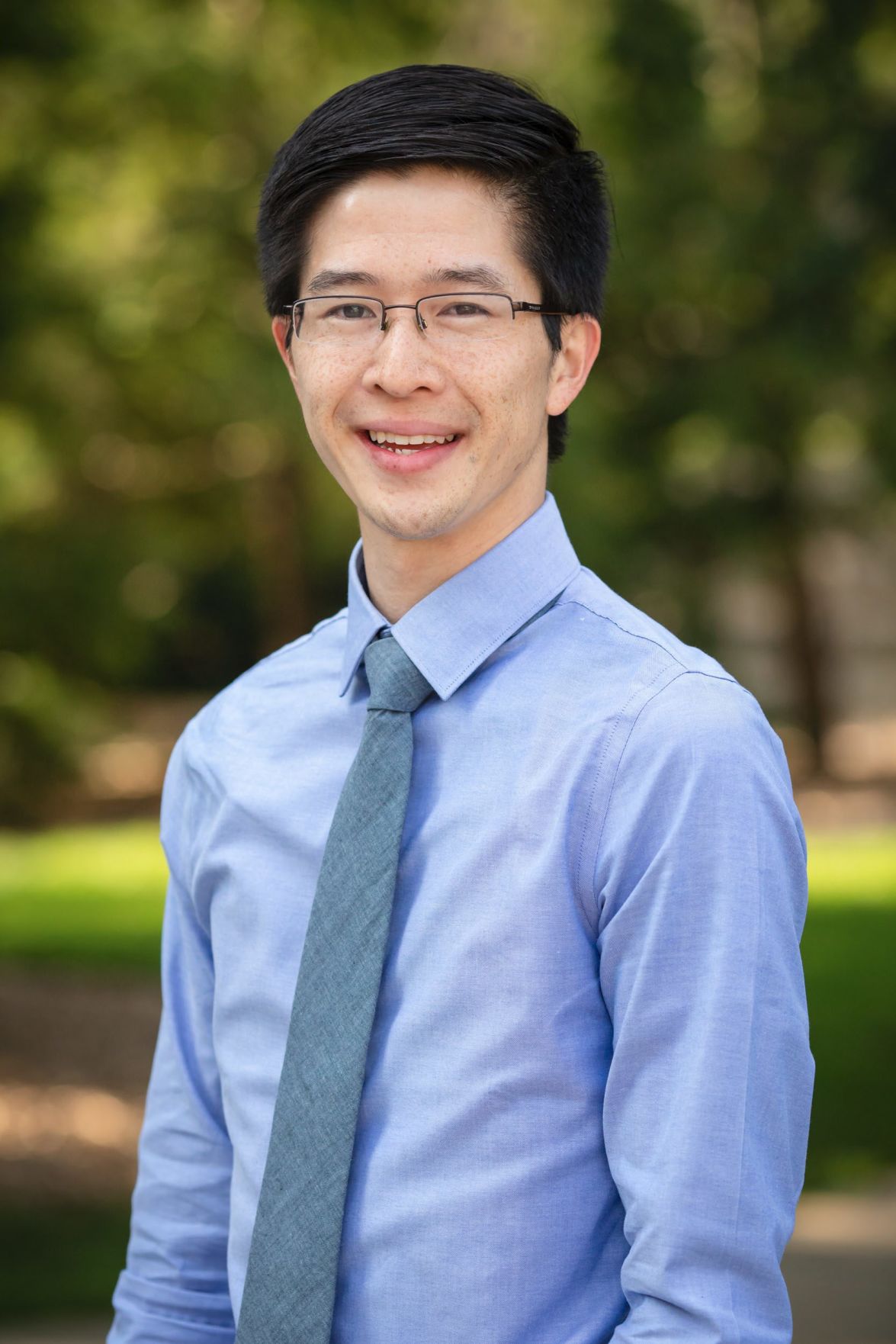 URBANA — The path from college to medical school was a 10-year journey for Kenny Leung. For Kitan Akinosho, it's been five years. For Elizabeth Woodburn, a matter of months.

The three students — a software engineer, data scientist and recent bioengineering graduate — are all part of the inaugural class of the Carle Engineering College of Medicine, drawn by its focus on engineering, an innovative curriculum and, in part, four years of free tuition.

The class of 32 is about to start its sixth week of classes at the medical school, the first to combine engineering and medicine from day one. That was the chief draw for all three students.

Leung, a Seattle software engineer who grew up in Hong Kong and California, has always harbored an interest in medicine.

After graduating with an electrical engineering/computer science degree from the University of California-Berkeley in 2008, he worked for Microsoft, a couple of health care tech firms and a hospital electrophysiology lab, designing applications for medical data systems, interpreting genetic data for personalized medicine and improving how data is collected from pacemakers and other devices.

Working with patients as a hospital volunteer solidified Leung's desire to become a doctor. He was just about to apply to medical school when he came across the Carle Illinois website, described as "the world's first engineering-based medical school."

"It just drew me to it. The biggest factor was the from-the-ground-up curriculum with engineering integrated into it," Leung said. "I didn't want to lose the engineering side. Every time I see a problem, I want to find a solution to it. This is what defines me."

One of the school's graduation requirements is a capstone project where students design an innovative program or tool to improve health care.

And with the UI's top-five ranking in engineering, "I knew that coming here I would have no hesitation being connected to the right people who could help me push those ideas along," Leung said.

No 'buckets of debt'

Akinosho, a Princeton engineering graduate who grew up in North Carolina, worked for five years as a lead data scientist for the federal government before entering medical school.

"Medicine has always been something kind of close to my heart. I was very interested in the way that you can care for people, oftentimes at one of the most traumatizing times of their life," said Akinosho, daughter of a pastor and a hospital laboratory scientist.

But she decided to apply her engineering skills in the work force for a few years first.

Carle Illinois wasn't on her radar until a health professions adviser reached out to tell her about the new engineering-based medical school, which intrigued her.

"Many of the schools I looked at I'd have to work on my own to combine the two," she said.

"I really wasn't thinking of going this far west," she said. "Most of my family is on the East Coast. But I was really excited about the program they were putting together here."

"It definitely made it easier to swallow," she said. "So many of my friends who were graduating from medical school had almost $300,000 in student loan debt. If you can get a good education and not graduate with buckets of debt, then it's a win-win."

Woodburn, an Illinois native who received her engineering degree from the UI last spring, had hoped to take a gap year and then apply to medical school for 2019, including to Carle Illinois.

But the prospect of four years of free tuition for the inaugural class was too good to pass up. She applied here and nowhere else — her "moonshot."

She'd been thinking about medicine since high school but chose bioengineering instead of biology as a major because "I wanted to be able to design things," said Woodburn, whose dad is a UI mechanical engineering graduate.

Her research focused on biosensors that essentially turn smart phones into handheld diagnostic tools. But she knew she wanted to see patients, too, and Carle Illinois "bridges that gap," she said. "That's why this school ends up being a perfect fit."

It was the Wednesday before spring break last March, and she had a meeting with Professor Brian Cunningham, principal investigator for her research group, and another member of the team. About 10 minutes into the meeting, there was a knock on the door. Woodburn recognized Li, but told herself that he might be there to see Cunningham, who is involved with the medical school.

"Then, he said he was looking for Elizabeth Woodburn," she said. "At that point, I kind of figured out what was going on."

Suddenly, the room filled with people holding cameras and smiling at her. Overwhelmed, all she could do was take the box of acceptance materials from Li and say "thanks" four or five times.

"It was fun to feel the energy in the room of people who had been working for so long behind the scenes to build this school," she said. "They were so excited to finally have a student in front of them."

Already out and about

Leung and Akinosho said the transition back to school has been a little rough — namely, figuring out how much to study. "It's like drinking from a firehose," Akinosho said.

Given the students' varied backgrounds, Woodburn likes the team-based learning environment, so if a student is strong in a particular area, she can help others. It also reflects how medicine actually works in the real world, Leung said.

The students are grouped in "pods" of eight for the four years. Material is structured in six-week modules built around specific organ systems such as the heart. They will learn about the anatomy and diseases of the heart, dissect one in a physiology lab and discuss a real case as a team.

Leung and Woodburn said seeing how the knowledge is applied makes it easier to learn.

"It's not just, here's bunch of data, everyone sit and stare at the professor," Leung said.

They're also happy to be getting early exposure to real patients. During their second week of classes, they were already out shadowing doctors at Carle Clinic, Christie Clinic and Frances Nelson Health Center in Champaign-Urbana and satellite clinics in Mattoon, Rantoul and Mahomet.

On Wednesday, Leung was preparing to take his first patient history at Carle's family practice residency clinic under the watchful eye of Dr. Brandyn Mason.

With standard medical training, "you don't do this until the end of the second year," Mason said. Medical students typically see "standardized patients," but they're actors reading a script, he said. "This is real pathology, real patients telling real stories."

Students are asked to come up with an "idea project" for each clinical rotation, a rough solution to some problem — i.e. under-bed motion-activated lights to prevent patient falls in the hospital, Woodburn said.

"We'll be specifically trained to have that critical eye throughout," to be "physician innovators."

Akinosho has enjoyed working with standardized patients to learn how to take a medical history and ask questions about their background.

"Communication is such a huge part of medicine," she said. "You can bring in the smartest person in the world, but if they can't communicate, they're not going to be a good doctor."

There have been small hiccups, but the students said they appreciate the new medical school's willingness to get student feedback and fix problems quickly — extending a professor's office hours or making sure everybody has access cards for the newly renovated Everitt Lab, for example.

"Innovation isn't just something that they say, it's also something they do," Akinosho said.