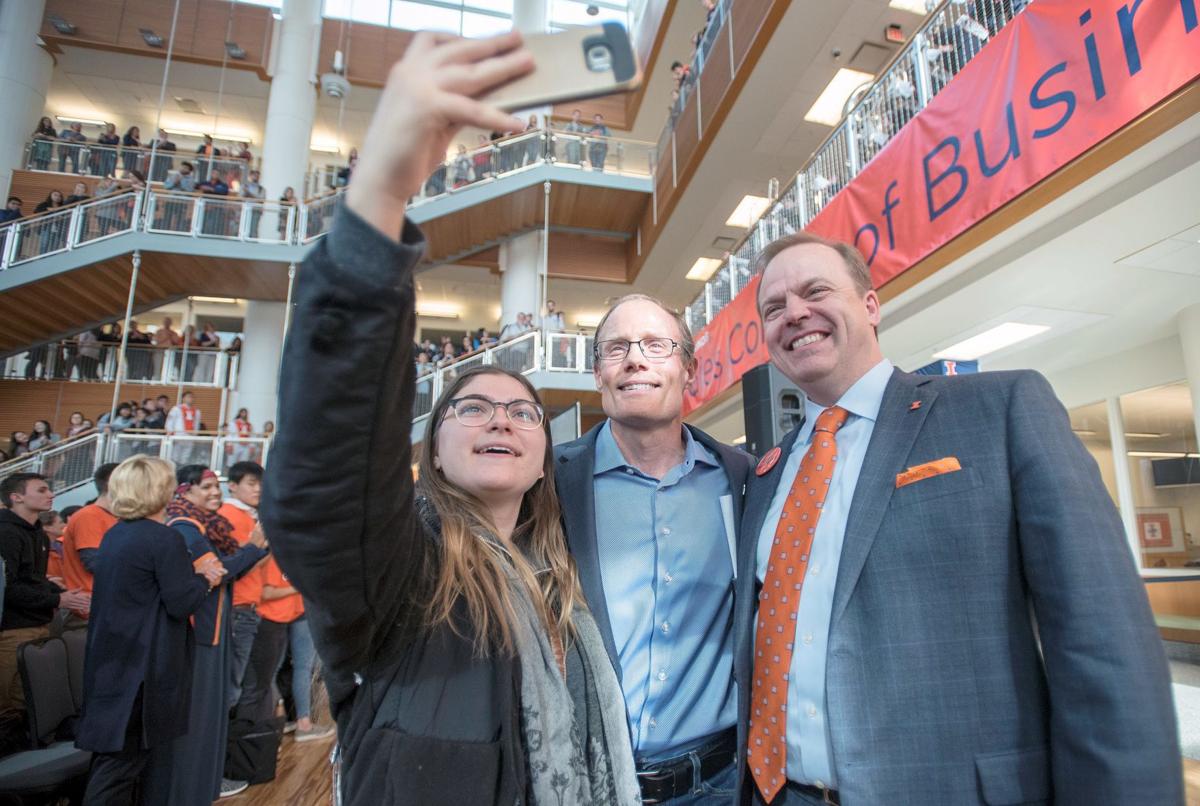 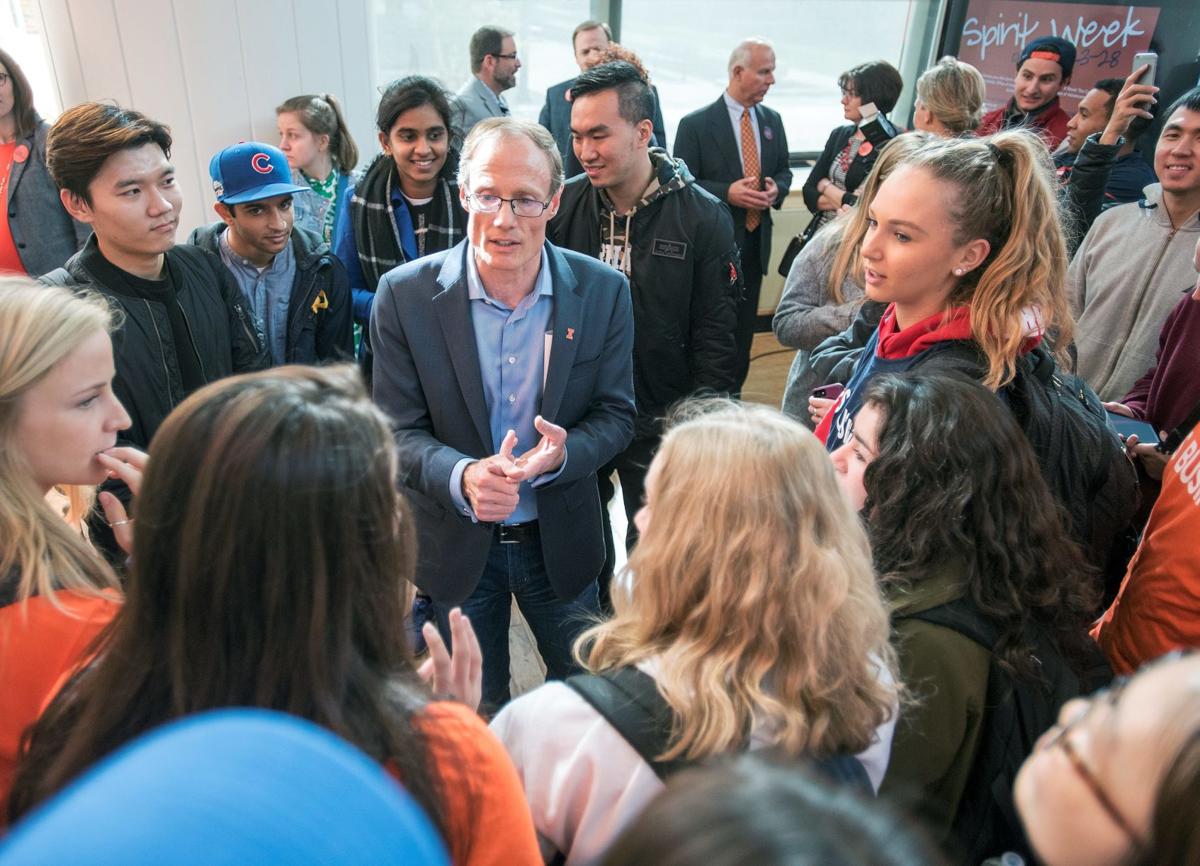 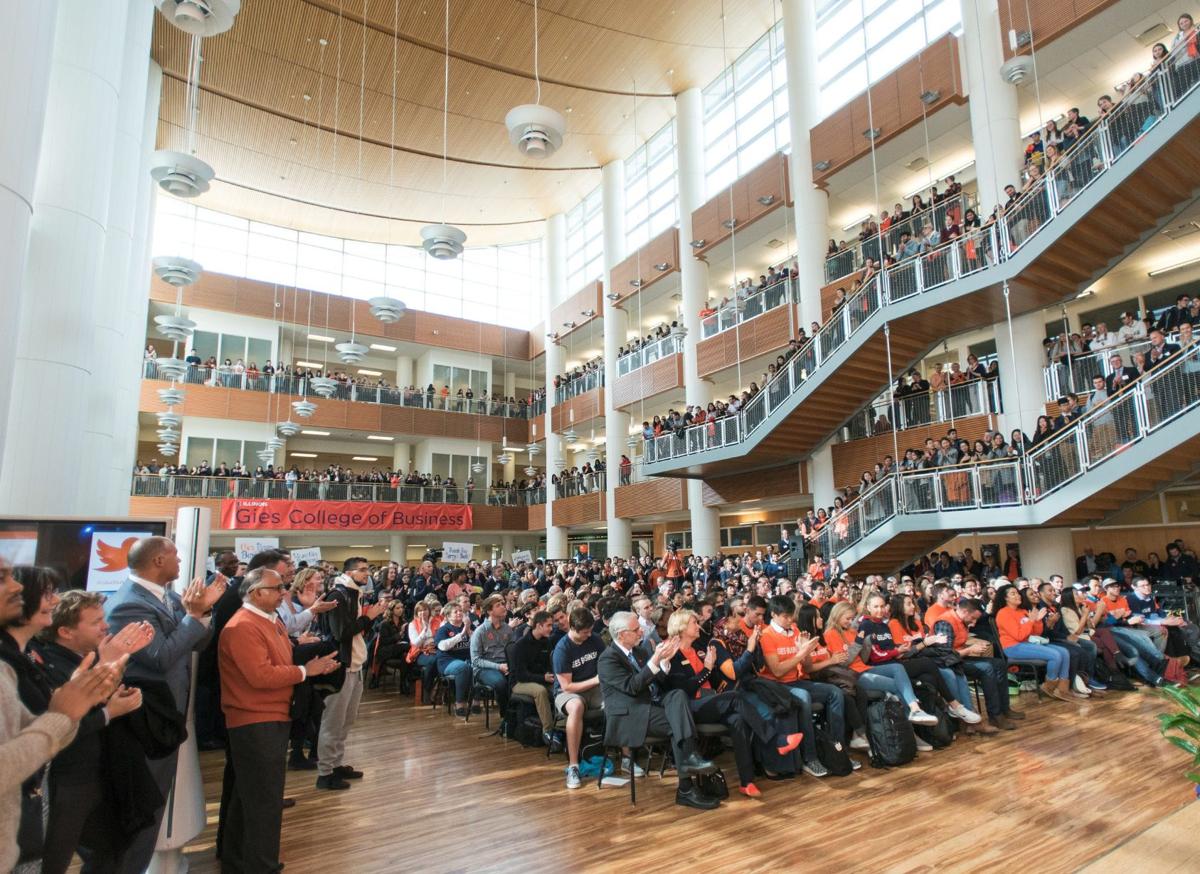 CHAMPAIGN — It took a little over an hour, but Larry Gies made his way through a sea of University of Illinois business students.

Faces glittered with appreciation as he gave advice, posed for selfies and listened to personal stories. He meant to meet more of the crowd that turned out near the end of Friday's festivities but was whisked away to a meeting.

Such is the life of the man whose name is now part of the UI College of Business. This week, Gies and wife Beth donated $150 million to the school — the largest gift in the university's history.

It will double the amount of financial aid the college provides, officials said, and students showed their appreciation at a ceremony on Friday.

Gies graduated from UI's accounting program in 1988 and went on to become the founder, president and CEO of Madison Industries.

Based in Chicago, it's one of the largest privately held companies in the world.

Business Dean Jeffrey Brown decided to name the school after Gies, who made light of how he didn't want that to happen.

"They said, 'We want to use your name because there's four letters in it, and we can fit it on a sweat shirt,'" Gies said during his speech Friday.

Gies reminisced about old days during his homecoming. His favorite place on campus? The sorority house where he visited his future wife. He also gave a shoutout to finance and economics Professor Larry DeBrock.

"I learned the guns and butter of economics from him," Gies said.

As a former member of Delta Chi, Beta Alpha Psi, student senate and the student government association, Gies encouraged students to get involved and practice leadership before graduating.

"You need to make the commitment today to raising the bar," he told students. "To not go through the motions of getting a degree but take each and every day ... to learn and experience everything you can."

Gies also emphasized compassion and teamwork, encouraging students to lend a hand if they see someone struggling with a class.

The decision to pursue business, Gies said, came from realizing that "I loved creating and thought that was the best way to be able to give back." When graduation time rolls around, Gies said prospective salaries shouldn't be at the top of students' minds.

"Find something you're passionate about that makes a difference in the world," he said.