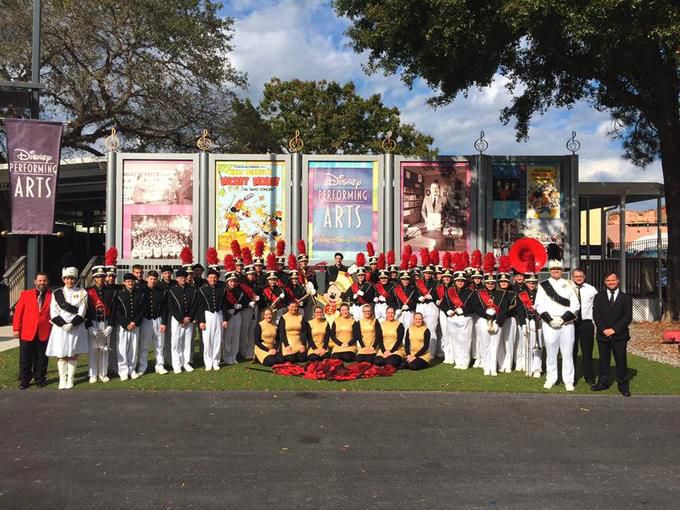 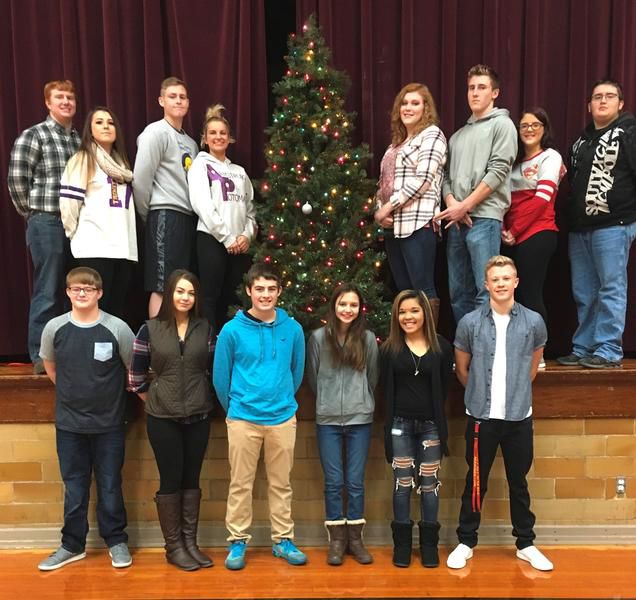 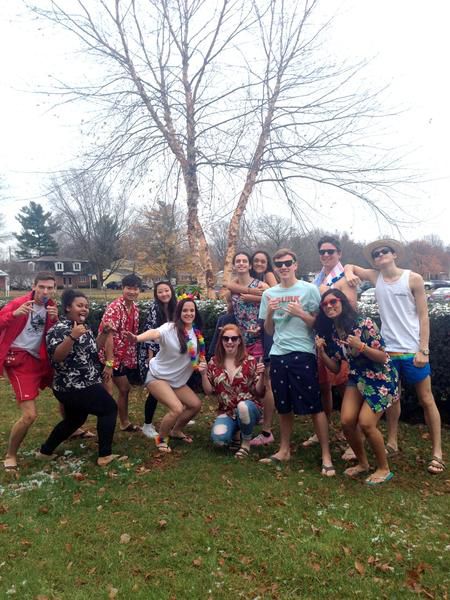 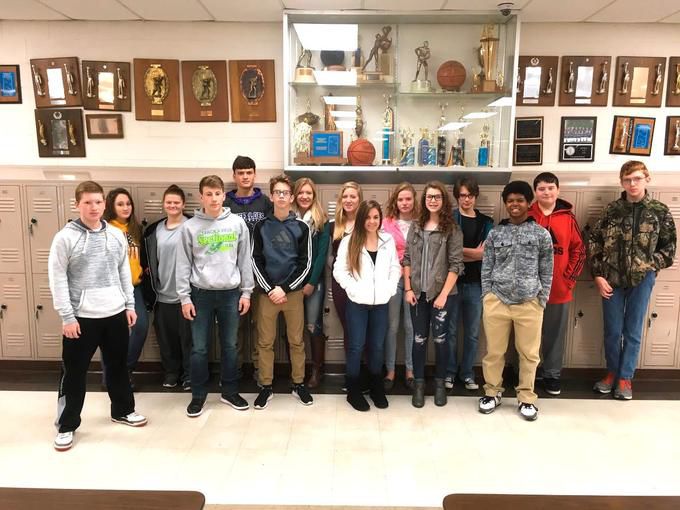 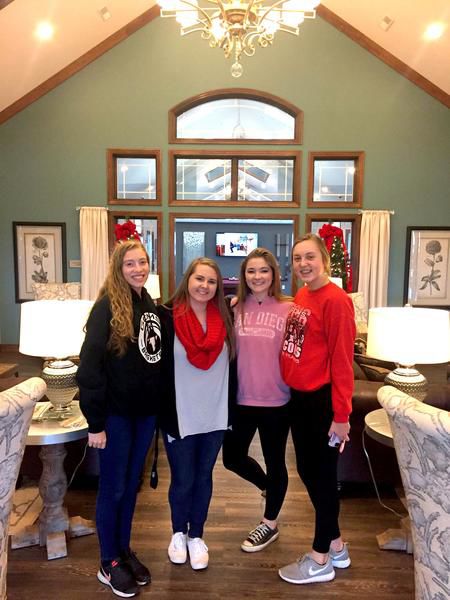 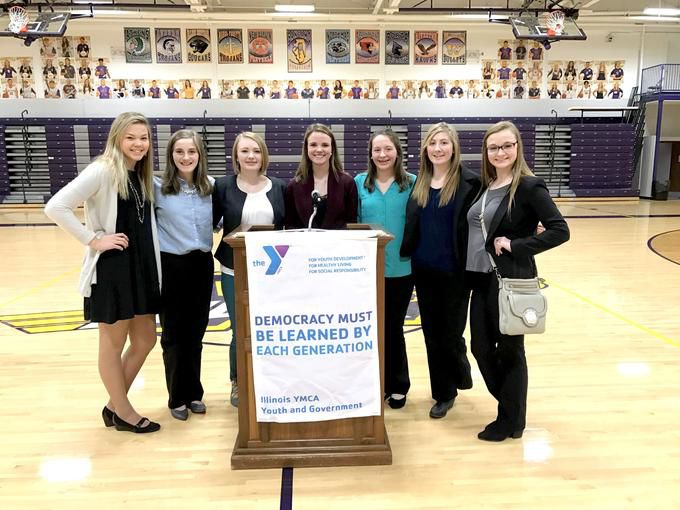 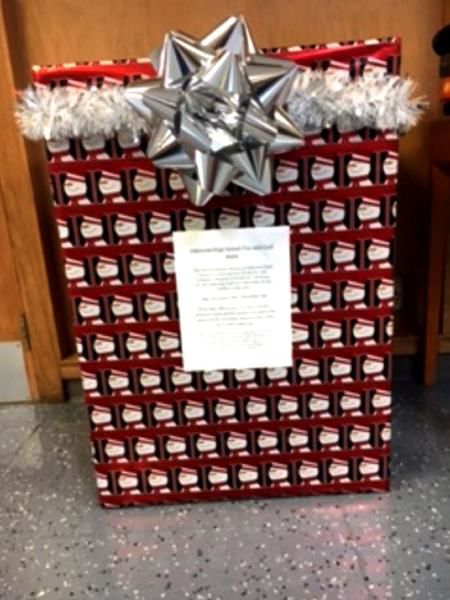 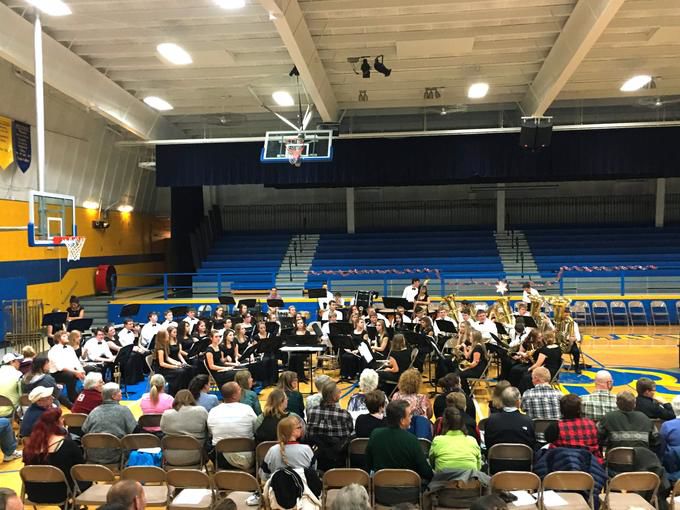 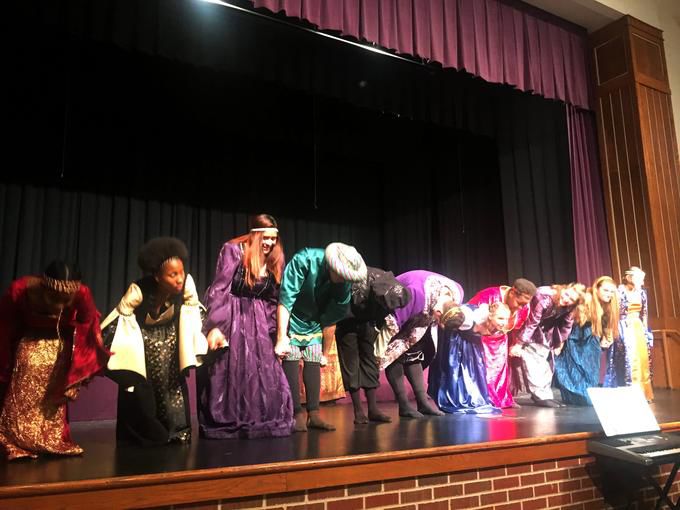 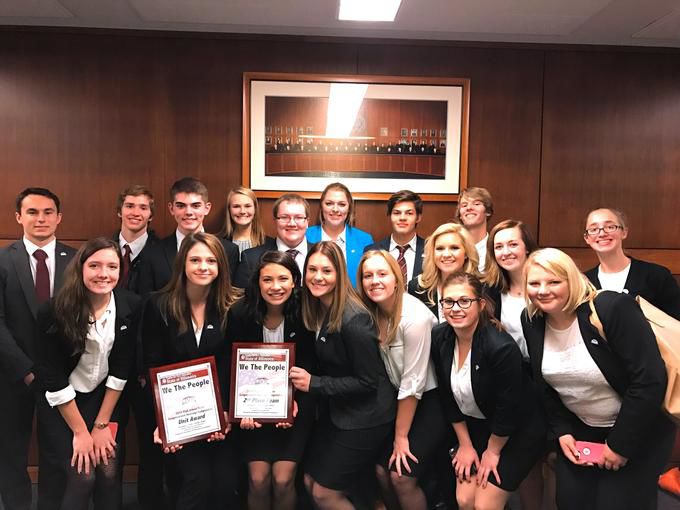 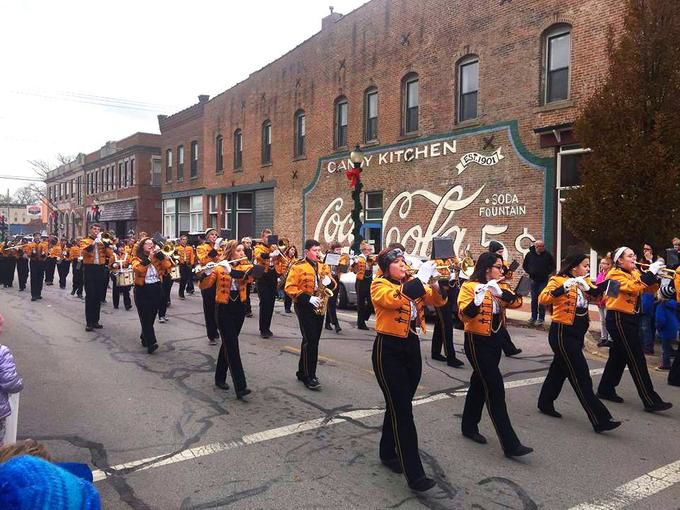 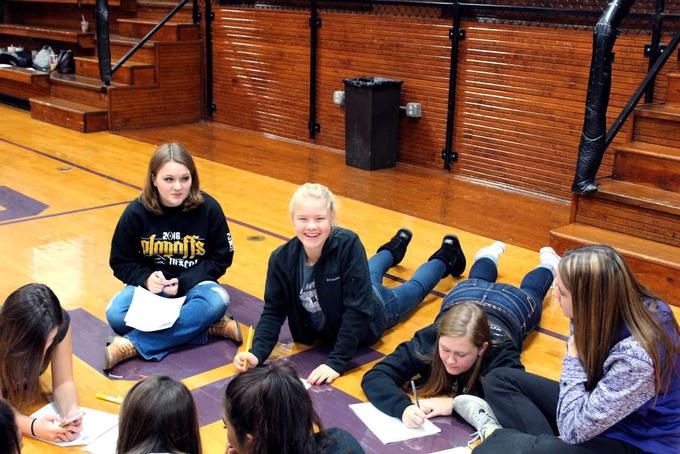 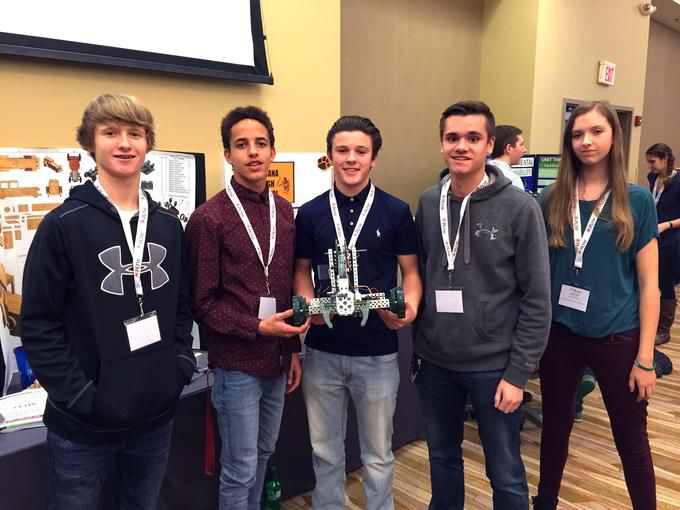 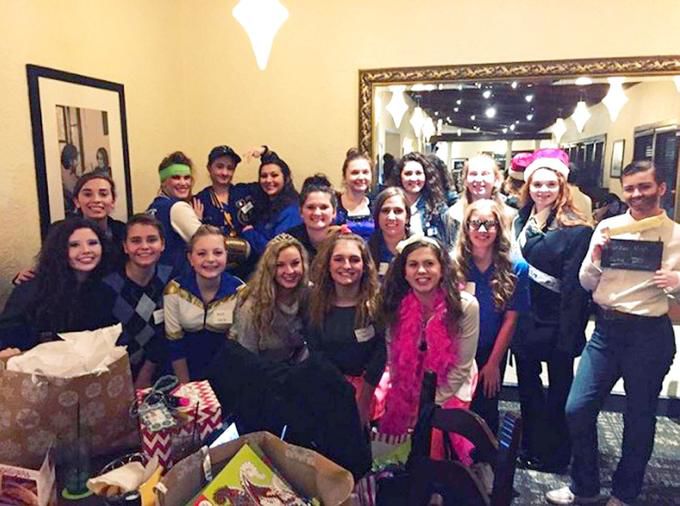 On Wednesdays throughout the school year, area students will fill us in on what's happening at their high schools:

The school's band returned from its Thanksgiving break trip to Florida excited, changed and exhausted. After a 22-hour trip, the Knights went to Epcot Center on Saturday, Disney World on Sunday and Hollywood Studios on Monday. The band performed during a parade at Disney World. Cassandra Adams said, "We did very well, and it was a fun experience marching down Main Street in front of the castle. It was an amazing experience."

The school devoted a week to "Day of Giving," making piggy banks available for students to bring in donations, as well as collecting canned goods. The winning class will receive an extended lunch period.

Last Friday, Jeff Beukelman's Key Club lined up Community Blood Services to come to the high school. Many students volunteered during their study halls to help students who were donating (45 students and faculty donated blood).

Ag business students are participating in a project focused on selling a product. Sydney Paris' group, for example, created a fake microchip that can be inserted into livestock and tracked via phone to measure the animal's health and whereabouts. Each group will make a presentation, and teachers will vote on which project they thought was the most effective.

It's a Centennial tradition for the seniors to dress in beach attire after the first snowfall. Here are a handful of seniors who participated.

Last weekend's annual Christmas on the Hill saw many groups, including the marching band and Cub Scouts, participate in the parade that featured Santa in his sleigh. Also, the grade school gym was the site of a bazaar where the music program sold pillows made out of old band uniforms.

Chrisman's cross-country teams celebrated with cupcakes and refreshments at their season-ending banquet. Senior Ben Brinkley, a sectional qualifier, and sophomore Quincy Snedeker were awarded the No. 1 boy and girl runner trophies.

As part of a community service project, senior Cassidy Thomas is collecting Salvation Army donations at the Dec. 16 basketball game. Also, students from the high school rang the bell on Dec. 3 at local grocery stores to raise money for the organization.

Four girls basketball players — Megan Moody, Kayla McCreary, Courtney Burton and Makenzie Bielfeldt — were the latest students to visit residents of the Villas of Hollybrook, an assisted-living home in Gibson City. GCMS students from a variety of sports, clubs and organizations often make the trip and enjoy the time together as much as the residents.

Last Saturday, Youth and Government attended Pre-Leg II at Williamsville High School. They presented a bill that would give tax breaks to people paying for college. Their bill received fifth priority and will be presented and reviewed in Springfield in March. The Youth and Government members are Kaylin Meister, Courtney Stewart, Haley Miller, Gracyn Allen, Sofie Schwink, Fiona Ely and Jada Davis.

It's a busy week for student council, which has been organizing holiday festivities and also selling hot chocolate and cookies for Angel Tree Families.

Sunday's annual district-wide holiday concert included each grade performing throughout the day. It ended with the high school band playing "Sleigh Ride," "Carol of the Bells" and "Frosty the Snowman" before joining the chorus for a performance of the "Hallelujah Chorus."

Sunday's annual Christmas program for the music department included performances by two bands (grades 4-6 and 7-12) conducted by Lisa Hillary. They performed songs like "Go Tell It On the Mountain" and "Silver Bells." A newly formed chorale group led by Josephine Guerret then sang "Freedom" by Pharell, the French national anthem and "Silent Night." The show ended with a performance by the children's choir, led by Sharon McMahon, that included renditions of "Frosty the Snowman" and "White Christmas."

Advanced civics students, led by social studies teacher Marshall Schacht, traveled to Chicago on Friday to participate in the Congressional Hearings at the Dirksen Federal Building. Groups of students answer a constitutional question in front of a judge. They are evaluated on their knowledge of our government. The group placed second and qualified for the national competition in Washington, D.C., in the spring.

Last weekend's Christmastown festivities included carriage rides, breakfast with Santa and a parade. The Tuscola Queens made an appearance, which included Madeline Clabaugh, Julia Kerkhoff and Ava Brown. The high school band marched with middle-schoolers at the parade.

Student council members attended the Kickapoo District Association of Student Councils' Fall Retreat, designed to increase leadership skills. Students played a color personality game that categorized their personality to a specific color. Junior Natalie King said, "We decided that in the future, we are going to try to split our council up by the colors (of our personalities) whenever we have to do something to see if it helps in our work." In this picture, Unity Student Council member Audrey Hancock (middle) is smiling while participating in leadership activities with student council members from other schools.

The Zero Degrees of Separation program brought to Uni minority students from Central and Centennial in the AVID program last week. The program was started and is headed by junior Daniel Ramkumar in an effort to bring to light stereotypes that students at every school have about other schools' students. Uni's Nora Benmamoun said, "I'm meeting new people that go to this (Centennial) school, since in Uni we are kind of isolated." Meanwhile, students in Japanese 3, 4 and 5 are on a nine-day trip to Japan. The trip is organized and led by Japanese teacher Mari Inami Porter.

Students representing Urbana at last week's Project Lead The Way (PLTW) state conference attended alongside Kyle Thomas, who teaches PLTW classes like Principles of Engineering, Civil Engineering and Intro to Engineering Design at the high school. "I feel like I have a lot more information on how the fields work, having taken all three classes of PLTW that are offered in Urbana," junior Sam Reel said. Bennett Anderson added, "Coming into high school, I had no interest in taking these classes; my parents sort of pushed me to join the classes. But after taking them, I've gotten a huge interest in this area."

The dance team released some stress before its first competition with a murder mystery party at Olive Garden. Also, students are getting into the holiday spirit by decorating the halls for Christmas. The effort has been led by junior Courtney Howard, senior Carissa Williams and teacher Blake Swan.

Meet the 36 area high school students who will serve as News-Gazette high school correspondents throughout the 2016-17 academic year.