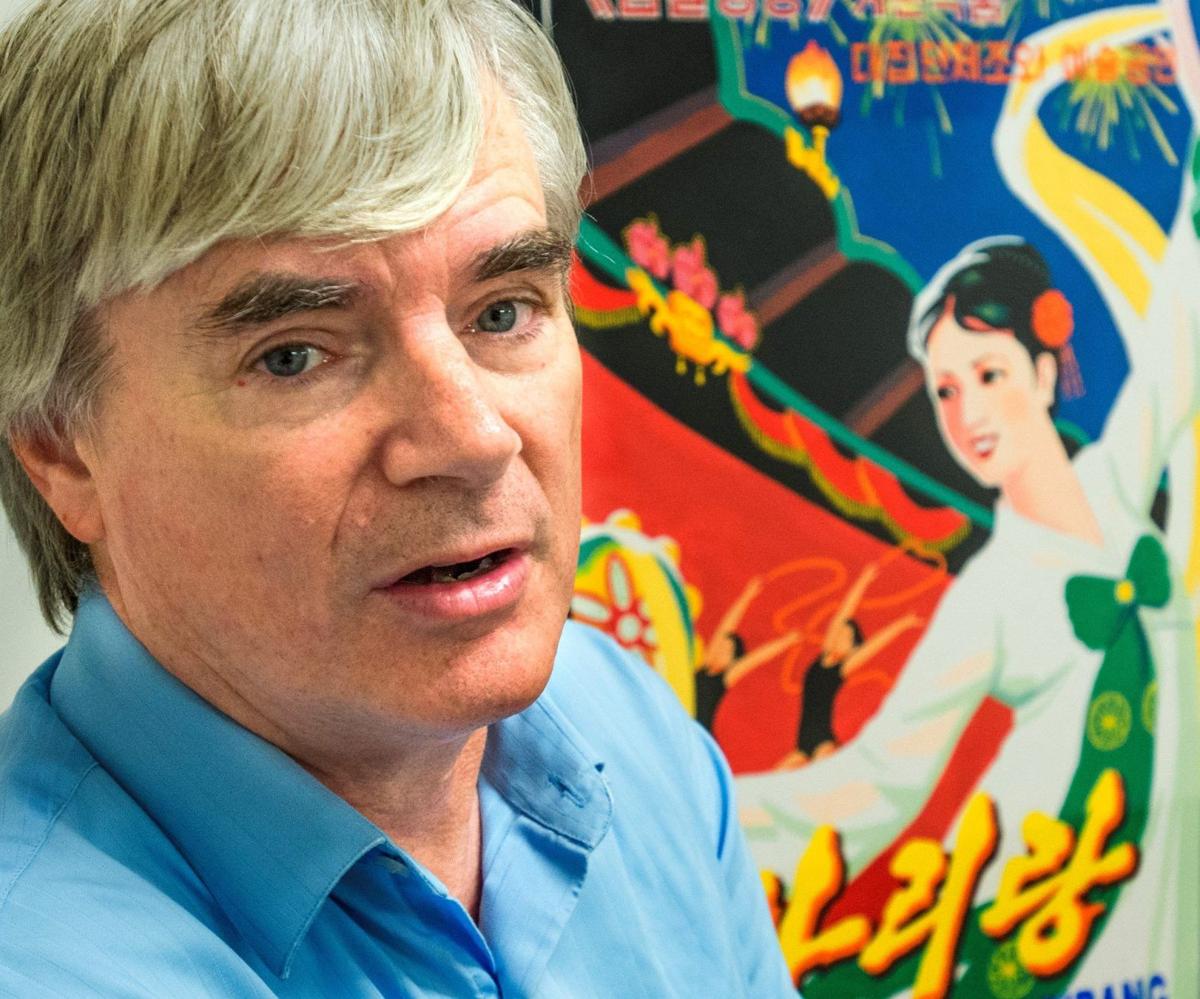 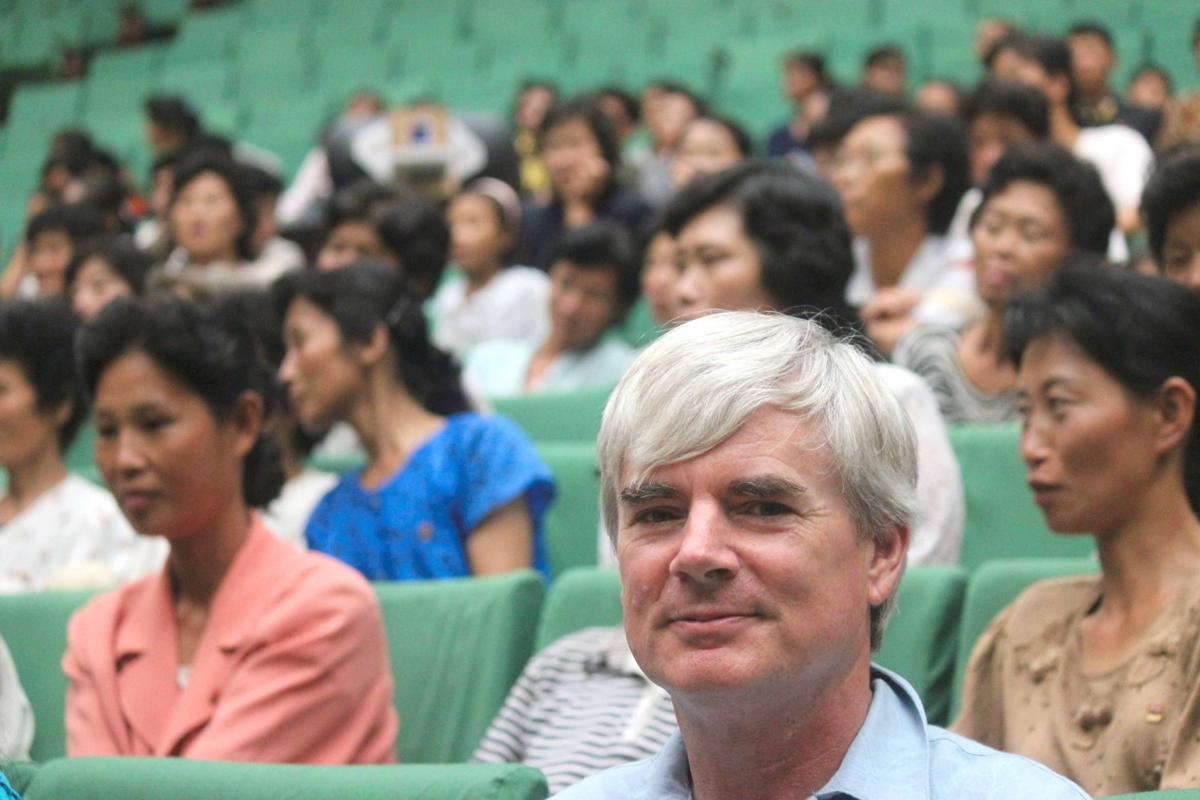 Hiking to waterfalls, browsing the local farmers market, zipping around a skate park.

Public speakers blasting speeches and music until 11 p.m. and speaker-outfitted propaganda vans driving through the countryside. Air raid drills, during which residents are warned about the coming imperialists.

Welcome to the Democratic People's Republic of North Korea, as seen by Ray Cunningham.

The frequent flyer, records administrator at the University of Illinois Foundation and former student of Soviet studies has visited North Korea annually since 2008. He recently returned from his latest trip there and one of the highlights was being permitted for the first time to use the local currency and shop at a grocery store.

The mayor of small-town Homer (population 1,200) is part of a small group of Americans who have journeyed into the country once labeled by former President George W. Bush as part of the "axis of evil.'

The State Department strongly discourages all travel by U.S. citizens to the country because of the risk of detention. It's unlawful to show disrespect to North Korea's former or current leaders, to shop in unauthorized stores or to take unauthorized photographs, among other rules. There is no U.S. embassy there and the U.S. does not maintain any diplomatic relations with North Korea.

Cunningham, however, is fascinated by the country and its people and is optimistic relations between the two nations could improve.

"If we can build bridges to the country ... the probability of us having a conflict with them is much diminished," he said.

Armed with a camera (he does not bring in any reading material, even novels), he has toured and photographed the art of the subway stations of Pyongyang, witnessed workers harvesting rice and shopped in a brand-new, multi-level grocery and department store, all the while documenting the country's progress over the last six years. Next year, he'd like to take a group from East Central Illinois to the farms and fields of North Korea to witness the harvest there. (Workers dry corn by stacking it in small piles along the streets.)

Most of what Americans know, or think they know, about North Korea is "complete nonsense," Cunningham said. "To understand, you have to go there."

Cunningham, who moved with his wife to East Central Illinois in 1996 from Vermont, has been trying to better understand countries, their economies and the lives of their citizens for decades.

With his father serving in the U.S. Army, Cunningham grew up in cities across the U.S. and Europe. He attended 21 schools before graduating high school.

In 1969, at 16, he first went to Eastern Europe. At the University of Utah, he majored in Soviet studies and studied East Asian politics. In the late '70s, he traveled through the Balkans, particularly Romania. He also roomed with a family in Bulgaria. In 1982, he traveled to the Soviet Union for the first time and three years later he bought a ticket on the Trans-Siberian Railway, riding from Moscow to Beijing.

His approach to travel has been based on what he learned in political science — examine the society and then compare and contrast it with other societies. He'd study a country's black markets and visit its rural parts. When a bus breaks down in the countryside, that's not always a bad thing. From his perspective, it's a way of gaining insight into the community where the bus has broken down.

On one trip through Asia, he met some North Koreans and started thinking about traveling there. It was one of those places viewed by travelers as "unattainable," at least to Americans, he said.

Early in 2008, during the 40th anniversary of North Korea's seizure of the USS Pueblo, he began exploring his options. He learned about a British group, Koryo Tours, which specializes in tours to North Korea. He flew to Beijing, obtained his visa and made the journey with a small group.

When people go for the first time, they're scared to death, Cunningham said. When they return, they tend to know more about what they can and can't do.

There are some things the North Koreans will not tolerate, such as handing out religious literature, he said.

"When you're there, you are a guest and should act accordingly," he said.

In its travel warning about North Korea, the State Department has said U.S. citizens have been arbitrarily held and detained without charges and prevented from leaving. Even those with organized tours have been detained, it said.

Cunningham said he's careful not to offer his opinions, especially about the ruling family or the political system.

Throughout Cunningham's first trip to the country and all those since then, he and his fellow travelers have been accompanied by North Korean monitors. Sometimes they were friendly and allowed Cunningham to take as many photographs as he wanted. Other times, none was permitted.

Of his first trip, "I knew at that time I wasn't seeing anything that I needed to see," he said. But "it whetted my appetite" for the country.

He returned in 2009. His early trips were limited to five days. The following years, they were extended to 10, then 17 days. By extending the trips, they were able to see life during the weekends, including the "voluntary labor brigades," when people perform jobs like cleaning cities and trimming grass. In recent years, he has been able to attend a revolutionary opera, an event travelers have been requesting for years.

"There's a misperception that they're all in a prison camp," he said.

On flights between Pyongyang and Beijing, China, he noticed many of the passengers he encountered were business travelers. Over the years, he has seen signs of the food situation becoming more secure (the country experienced famine in the late '90s), such as women selling ice cream to school children. His tour guides have taken him to shoe factories, bottling facilities, hospitals and the birthplaces of historic figures. He's toured modern, clean textile factories and taken photos of children roller skating and playing soccer.

That's not to say there are no hints of the country's dark side. For example, the time he was restricted from taking photographs in a valley due to a nearby prison.

Monitors will ask travelers to see their photographs, sometimes asking them to delete some. They also were not keen on tourists taking photographs of ox-driven carts because they give the perception of the country appearing "backward."

"It is difficult to live in North Korea, yet they persevere. You cannot but admire this. I'm amazed. They work 48 hours a week, not including their time with the labor brigade on Sundays," he said.

On his recent trip, the visitors were allowed to browse an outdoor market (like a farmer's market) for hours. Everything being sold was either homemade (he's seen homemade paint for sale) or imported from China.

In the early years the minders were strict about photographs. Now in Pyongyang, he can hang out the window of the bus and take pictures.

The air raid drills continue. The propaganda speakers blare until about 11 p.m., and the propaganda vans still drive around, broadcasting speeches and music.

"This isn't anybody's idea of vacation. You go to learn, to observe," he said.

Cunningham goes to take photographs. He snaps pictures of almost everything — his plane tickets, his visas, the vistas, the murals, the statues, the people. In the early years his subjects would be shy, but now they often take out their own cameras or phones to snap their own photographs.

He has found that traveling there alters one's perceptions.

"Going to North Korea is about confronting yourself and what you think it's like and when you come out, it's not like that. And then it makes you think, what other things do I think about that might be different?"

He has spent a total of 52 days in the country. Typically, he will fly to Beijing, take a few days to relax and adjust to the time difference and then join the tour to enter Korea. Some go by train, Some fly in. During one trip, the tour met at the border near Yangji and walked over the Tumen River bridge. At the border checkpoint, he spent an hour and a half with officials as they inspected items he was bringing in.

He has stayed in "folk hotels," where travelers sleep on the floor; guest houses, where he stayed on mattresses on the floor; and more traditional, western style hotels. The hot water situation can be different. If he stays in the country, he hauls his own water. The toilet facilities also can vary.

It is the darkest place he has traveled; the night photography is great, he said. Glow sticks are a must. A flashlight is essential.

"It's fascinating. Once you go, it can be addicting. It's not just a destination like Tibet or Vietnam. It's very different. At least in Vietnam you can go to KFC."

You can see some of his photos, artwork and items he's brought back from the country in February when his work is on display at the Illini Union.