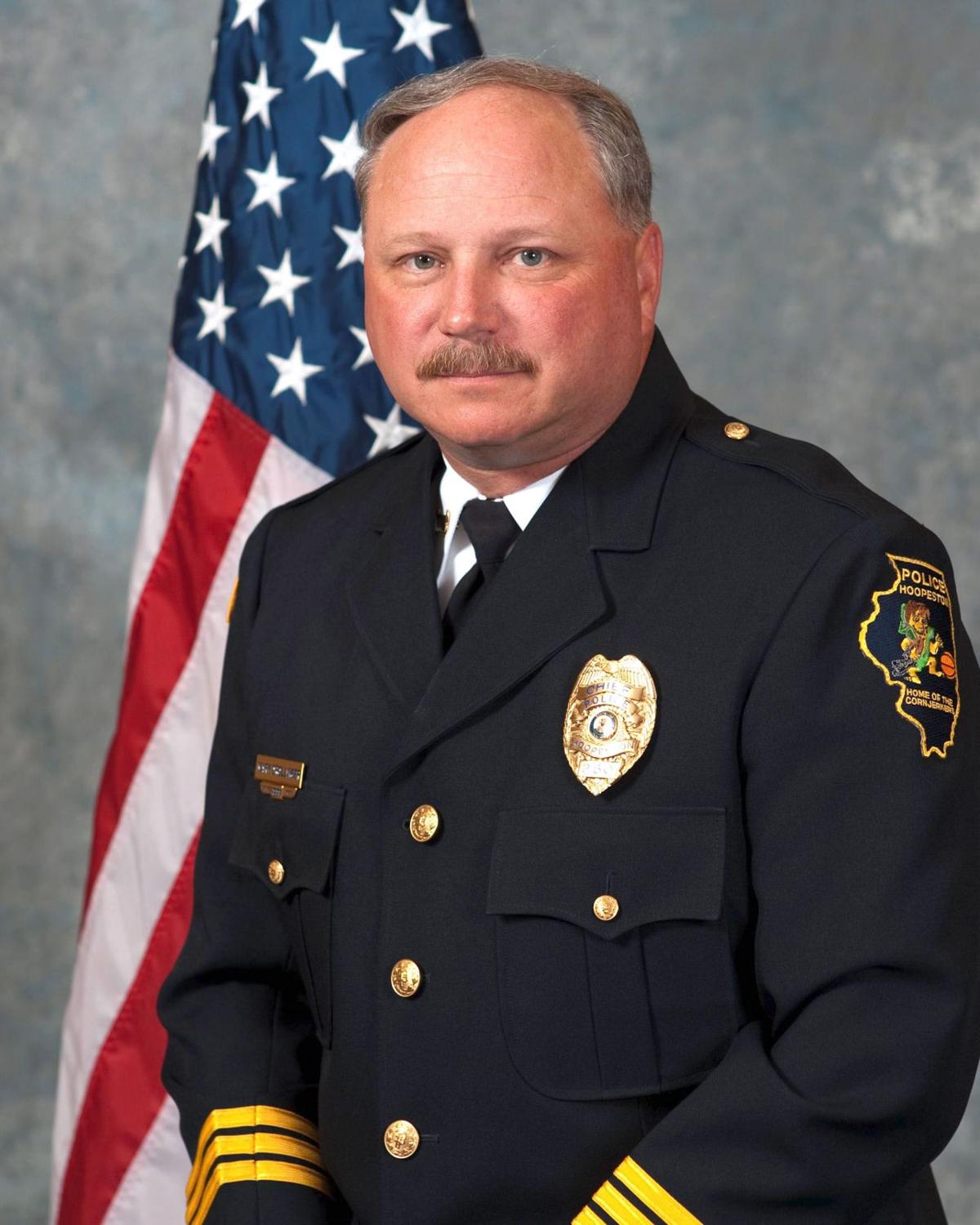 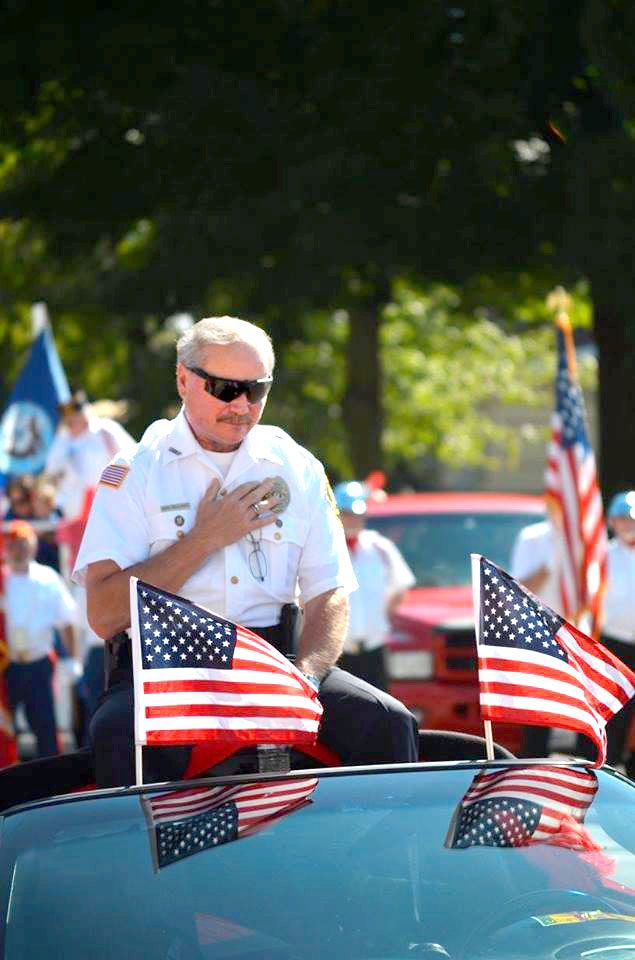 HOOPESTON — Shortly after Hoopeston resident Jenna Leslie's brother was diagnosed with testicular cancer some three years ago, the police chief was at his side.

Mark Drollinger wasn't just a family friend. He had battled the disease years ago.

"He was somebody to talk to and spend time with," Leslie said, recalling Drollinger provided support and encouragement to not only her brother but the whole family.

"So when we found out he had cancer, we wanted to do something for him," said Leslie, whose family is selling black wristbands with "Chief Strong" and "250," Drollinger's badge number, and plans to donate the proceeds to the Carle Cancer Center in Danville.

"It's our way to say thank you for being there for us, and we wanted to support him."

Drollinger shared on Facebook that he had Stage 4 cancer of the mandible (jaw) shortly after his diagnosis last March. Recently, he decided to share his experience with a wider audience in an effort to raise awareness about oral cancer, which is on the rise.

"If you have any kind of pain or odd feeling, go to your dentist or doctor or somewhere. Don't hesitate to get it checked," he said. "It can be a silent killer."

Drollinger experienced a pain on the right side of his mouth for nearly two years. He thought he had an abscessed tooth. A dentist extracted the tooth, but the pain persisted. Then the pain spread to his tongue.

A doctor biopsied his tongue, and the test came back negative for cancer. However, a subsequent CAT scan revealed a tumor on his jaw. Doctors couldn't rule out cancer.

When he got the phone call, Drollinger was patrolling in front of the house of a retired officer who had recently passed away. The officer's wife, who was a high school classmate of Drollinger's, ran out to the car when she saw him slumped over the wheel.

Ironically, it was March 30, 2016 — 35 years to the day that an 18-year-old Drollinger was in Indianapolis getting a physical to go into the U.S. Air Force.

"When they got to the part where they say, 'Turn your head and cough' ... they pulled me out of line and said, 'Get dressed and go see your family doctor,'" recalled Drollinger, who was diagnosed with testicular cancer.

Doctors removed the cancer, and the teen remained in the hospital for a week.

But "it was a quick recovery," said Drollinger, who after graduating from Hoopeston High School in 1981, was on active duty with the Air Force in Nevada from 1982 to 1985 and in the reserves until 1988 and studied criminal justice at the University of Las Vegas-Nevada during that time.

Back then, he said, the news "didn't hit me as hard as this did."

Over the next few weeks, doctors did further testing, including a biopsy of Drollinger's jawbone. When he hadn't heard anything by Memorial Day weekend, he emailed the doctor, who responded immediately. He wanted to send it to a trusted colleague for further testing.

The results came back the following Tuesday — Stage 4 cancer.

How could this be, Drollinger wondered. He had never smoked or chewed tobacco. He said his Carle hospital oncologist remains stumped, too.

On July 9, Drollinger underwent a nine-hour surgery to remove the tumor and right jawbone. Then a team of 13 surgeons and nurses removed part of his right tibula and used it to reconstruct his jawbone.

Drollinger had a tracheostomy tube for three days, and he was on a feeding tube. But he said his medical team was amazed at how quickly he recovered.

Drollinger — Hoopeston's police chief since Jan. 5, 1999, and a Vermilion County sheriff's deputy for 10 years prior — was strong enough to serve as the grand marshal of the Hoopeston Sweet Corn Parade, held the Saturday before Labor Day.

Soon after, he started radiation and chemotherapy. He went to the Carle Cancer Center in Danville for radiation every weekday for six weeks, and he had two chemo sessions during that time.

'Not that big a deal'

Drollinger worked until the end of June. He returned in October, even though his doctor advised him to wait until the first of the year.

Sgt. Jim Dewitt served as acting chief during his absence.

"He did an outstanding job," Drollinger said of the 17-year veteran.

The chief is on light duty, working about six hours a day — and mostly in the office. "It's killing me to not be out on the street, patrolling and talking to people," said Drollinger, a hands-on chief. However, he admitted, it doesn't take too much for him to feel extremely fatigued.

"Now I struggle to get into the office and get the daily paperwork and monthly assignments done — all of the things that are usually just a side note."

While he doesn't talk about it, Drollinger wakes up to some level of pain every day. He can eat food again, although he has all but lost his appetite.

"Things don't taste the same," said Drollinger, who watched his weight drop from 190 to 160 pounds. He can't have his feeding tube removed until he gains more weight. That will be soon, he hopes.

He has suffered some setbacks such as problems with his kidneys and a bout with cellulitis, a bacterial skin infection that landed him in the hospital over a weekend earlier this month.

Despite this and knowing he's not in remission yet, Drollinger remains upbeat.

"I try to be a person who is living with cancer, not a person whose cancer controls their life," he said. "And when I first got this, I vowed that cancer would make me a better person, and I think it has. I take nothing for granted anymore, and I don't get frustrated over the small, mundane things. It's just not that big of a deal."

Drollinger said he has been able to fight so hard and stay positive thanks to the support he's gotten from his son, Patrick, and stepson, Christopher Land, the first two faces he saw when he awoke from surgery; his girlfriend, Susie Ward, who constantly has been by his side; Micah Mobley, the police department chaplain; Mike and Kebby Knake, who took him to radiation and stayed overnight at the hospital when Ward wasn't able to; and countless friends and associates from Hoopeston and beyond.

"It's been overwhelming — and humbling, and I can't thank them enough," he said of their support.

Drollinger has watched over the community for the past 18 years. Now, residents said, they're happy to return the favor.

"He's my bro," Kebby Knake said, recalling times that Drollinger was there for her.

"Everyone has nothing but the utmost respect for him and what he does for the community on a daily basis," said Patrick Nicholls, an auxiliary police officer. "You ask him to do something, and he'll get it done."

Yet, Nicholls continued, Drollinger isn't the type that would ever ask for help. That's why he and another auxiliary officer launched a fundraiser to sell car decals. One is a red and white ribbon — the symbol for oral cancer — with "Chief Strong" and "HPD 250." Another design says "250 Strong," and "Chief" with a thin blue line running through it, and a resident purchased enough to put them on every Hoopeston squad car.

The officers used the money to buy a membership at Hubbard Trail, where Drollinger likes to golf. It's the least they could do for someone who has inspired others.

"When he's on Facebook, he's always telling people to be nice to each other, stay humble, be kind," Nicholls said.

Wristbands are $5 apiece; proceeds will be donated to the Carle Cancer Center in Danville in Drollinger's name. They're available from Jenna Leslie at 217-274-4230 or via her Facebook page.

Ribbon decals are $10 apiece and can be purchased by contacting Patrick Nicolls through his Facebook page.