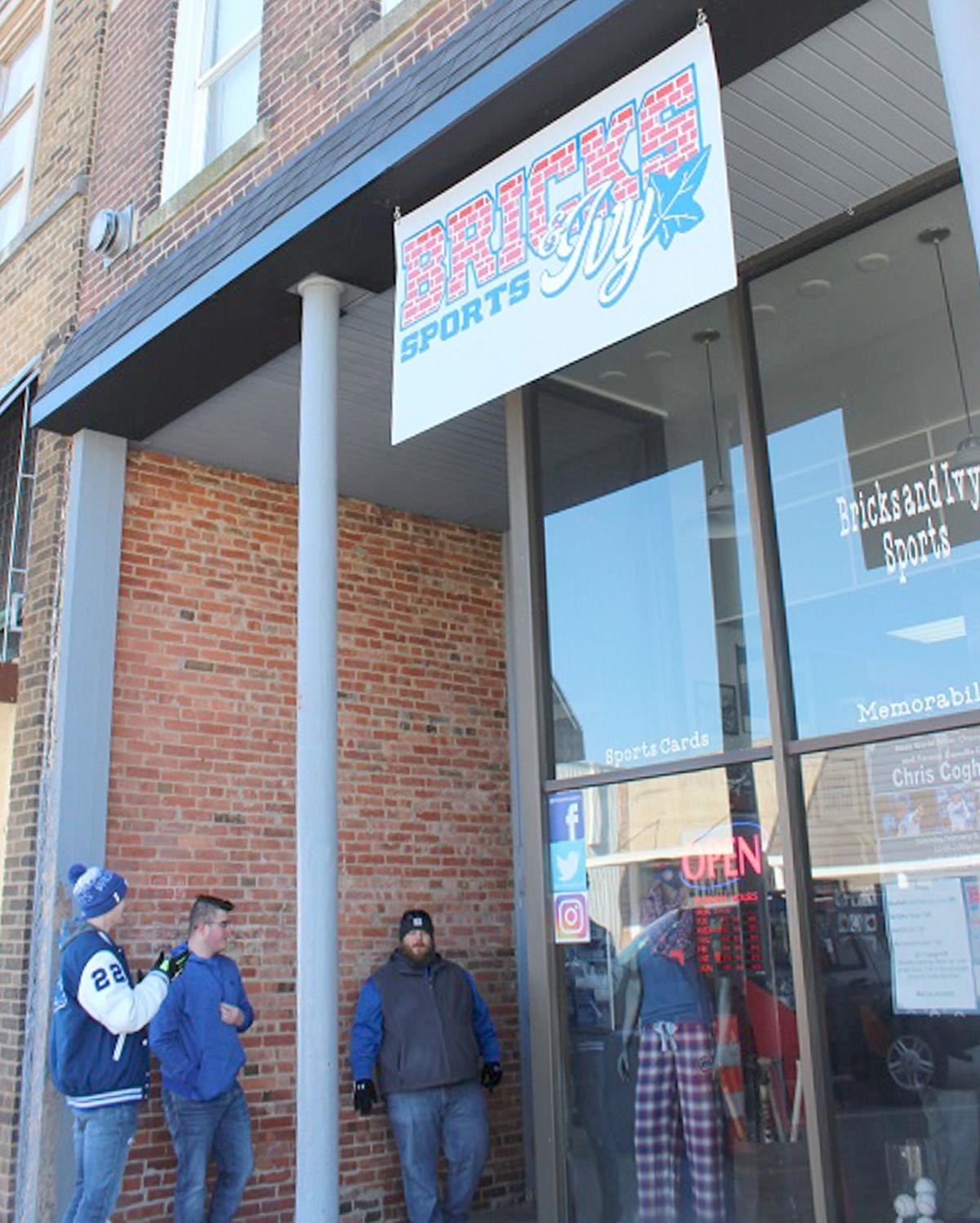 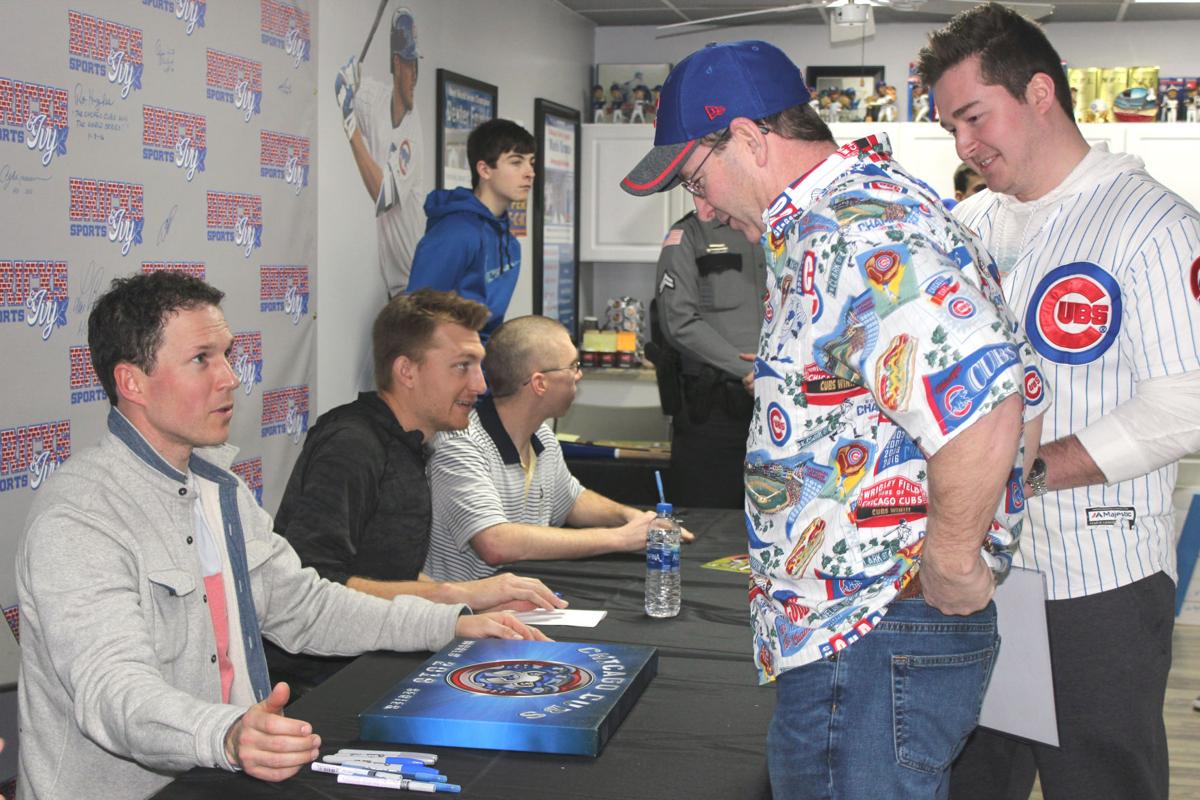 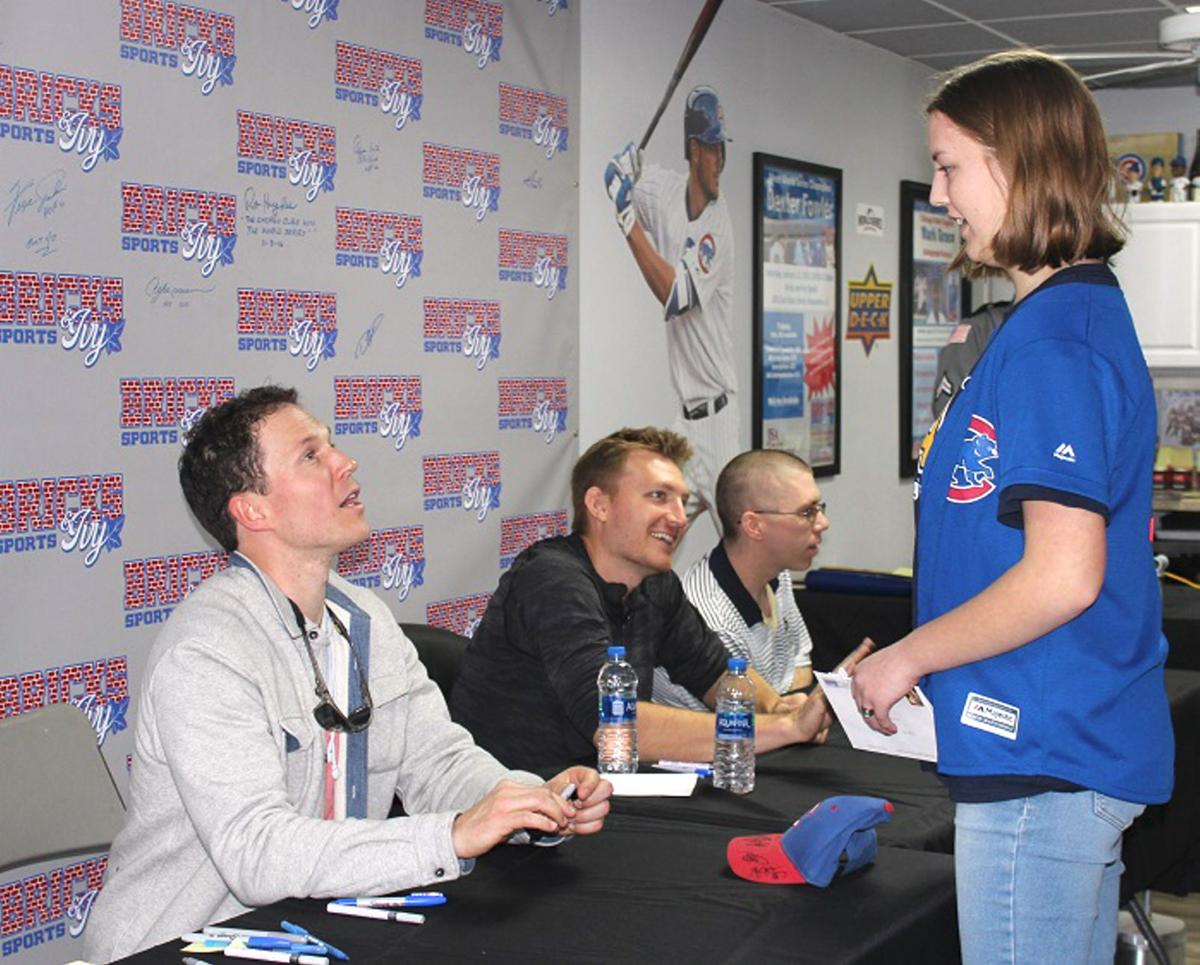 HOOPESTON — Keith Bresnahan didn't know anything about his 50th birthday surprise — other than to "wear Cubs stuff" — before son Cody picked him up in Minooka and began driving south on I-57.

During their Saturday morning road trip, Bresnahan said he asked his son where he was taking him as they got farther downstate. Cody kept the surprise under wraps for a nearly two-hour drive that ended in front of the Bricks and Ivy store in downtown Hoopeston, where neither had ever been.

Cody handed his dad an envelope.

Inside was a VIP ticket for an autograph signing with Cubs pitcher Mike Montgomery — who was on the mound at the end of Game 7, when the Cubs won the 2016 World Series — and Chris Coghlan, also a member of that historic team.

He didn't believe it when he first saw Coghlan's name on the printed ticket in the envelope.

Cody insisted. His dad's favorite major leaguer was indeed inside this off-the-beaten-track sports memorabilia and collectors store in ... where?

Had they been locals, Keith Bresnahan would have known something was brewing in Hoopeston from all the cars and trucks parked downtown midday on a Saturday in early February.

Another giveaway: people waiting in the under-construction restaurant next to Bricks and Ivy Sports, which can handle a max of about 50 people at a time.

A little after noon Saturday, the Bresnahans were among the first fans to file through to see Montgomery and Coghlan, who sat next to each other, talking with fans, posing for quick photos and signing everything from pictures, to baseballs, to bats to a large wooden blue "W."

"New memorabilia for the man cave," said Bresnahan, who was more than pleased with his son's birthday surprise. "He did fantastic."

The small corner shop, tucked into an old three-story brick building in the same block as the Lorraine Theater, is single-handedly responsible for pulling out-of-towners, even out-of-state folks, into Hoopeston's downtown on a regular basis.

Saturday's event with Montgomery and Coghlan, who also played with the Danville Dans, marked the shop's 11th and 12th autograph session.

"Almost everyone we've had has been a (star)," said Emily Brown, who opened the shop in May 2017 along with her husband, Bob.

The locals have noticed the uptick downtown on "signing days," especially when Bricks and Ivy hosted current Cardinal and former Cub Dexter Fowler, whose session drew 800 people to Hoopeston despite a storm that dropped several inches of snow throughout the day.

Steve Wood battled driving conditions that day on the trip in from the Chicago suburbs. Fowler was among just a handful of players he still needed to round out his autographed baseball collection of every player on the Cubs' title team.

On the way home, Wood said he counted 25 cars in ditches along I-57 between Rantoul and Kankakee.

"It was just awful," said Wood, who made it home slowly, but safely, and still counts it well worth the round-trip. "For somebody like that, yes, it absolutely was."

Gil Hernandez also braved the winter storm to make the two-hour drive to see Fowler. He said he's now been to Bricks and Ivy three times and will definitely return — even though he just went through a kidney transplant on Jan. 3.

"I don't mind the drive. I like to support card shops. It brings me back to my childhood," said the 45-year-old, who started collecting baseball cards again not long before undergoing a kidney transplant on Jan. 3. "By collecting again, (it) makes me not think about being sick."

"They just come from all over," she said, especially the "graphers," collector slang for autograph seekers.

The store posts its upcoming events on a couple of websites geared toward that crowd.

"It's just amazing, the people who are autograph chasers, how far they will go," she said. "It's just wild."

But locals hit the shop, too.

Jeff and Holly Edwards, Cubs fans from Potomac, were there on Saturday with their 10-year-old son, Ryan.

"We make it up here for every one," Holly Edwards said of the autograph sessions with Cubs players. Her husband joked that their son has been force-fed Cubs gear since he was small.

Bob and Emily Brown are Hoopeston natives, baseball die-hards and Cubs fans whose family business venture is in addition to their full-time jobs. Their son manages the store full time.

She said Bricks and Ivy is a sports card shop first, but does a lot of retail sales both in the store and online. There's a heavy emphasis on Cubs merchandise, but they feature a variety of other teams as well.

"We carry products for both teams. That's the big rivalry," she said.

Emily Brown said that for years and years, their family has attended baseball conventions, which feature player autograph signings.

"It's an experience we loved," she said, adding that they wanted to bring that feel to their hometown on a smaller, more affordable scale.

She said Bricks and Ivy doesn't make a lot of money on the autograph events, but bringing in big names helps with exposure for their store and building a customer base.

"It's been fun for our family," she said.

With a dozen successful sessions under their belts, the Browns are starting to hear from players' agents. She said they negotiate a contract with the agents, which the store pays for, and the agents set the ticket prices, which the Browns don't have final say over but do their best to try to keep as low as possible.

(A signed Montgomery item of any kind cost $49 last weekend. To get it inscribed ran another $15.)

"The way we have organized our events, they are a lot more intimate," she said, compared to convention autograph events. "The players seem to feed off of that, and they really give the fans a good experience."

Lifelong Cubs fan Jessica Ingram, 14, who was at Saturday's event with her mom, didn't waste time striking up conversation with Montgomery, asking him a few questions, including what Joe Maddon was like as a manager.

So far, Bricks and Ivy has brought in mostly baseball players, with the exception of former Bears star Dan Hampton and Cubs announcer Pat Hughes.

Emily Brown said they're open to bringing in anybody. They're currently negotiating with a basketball player, she said, and will soon be announcing additional signings once contracts are signed.

Sometimes, that part takes a while, she explained.

"It's just been really a lot more successful than we thought it was going to be, so it's great," she said.