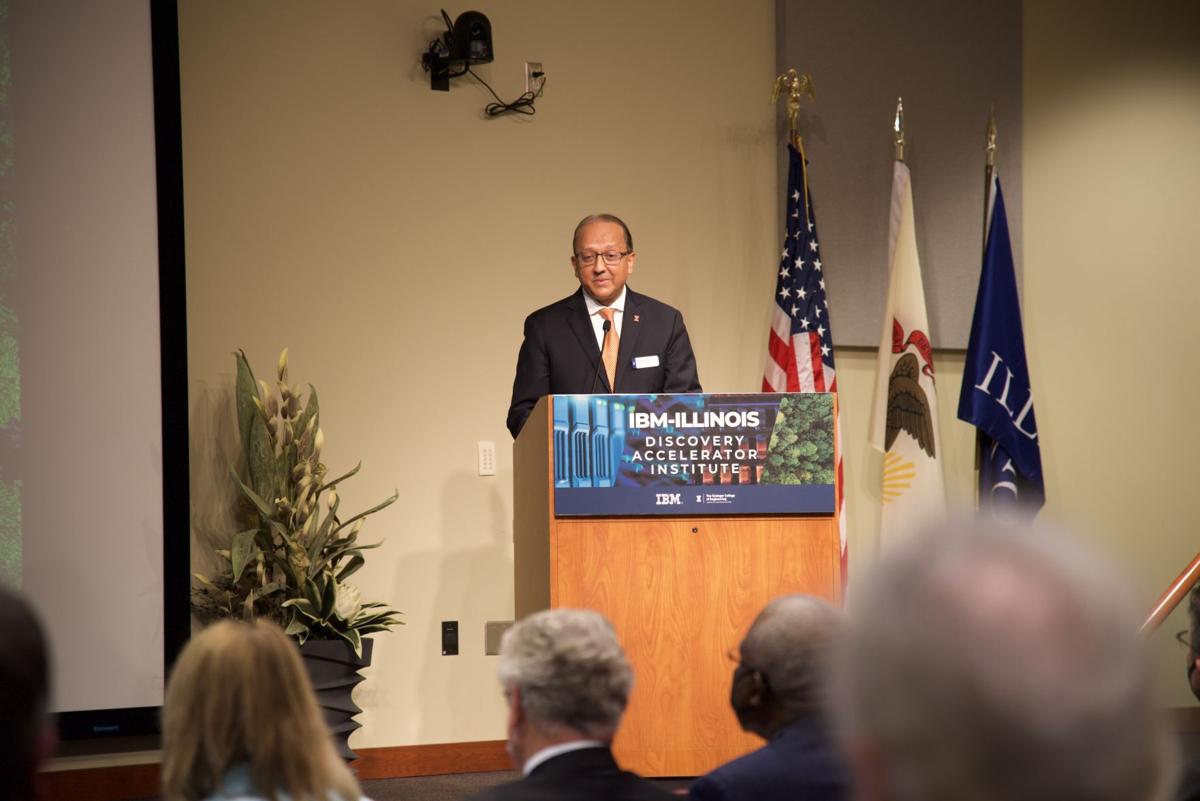 Grainger College of Engineering Dean Rashid Bashir announces the launch of the IBM-Illinois Discovery Acceleration Institute, the UI’s newest major research hub. His audience at the National Center for Supercomputing Applications on Tuesday morning included prominent researchers and administrators from the university and IBM. 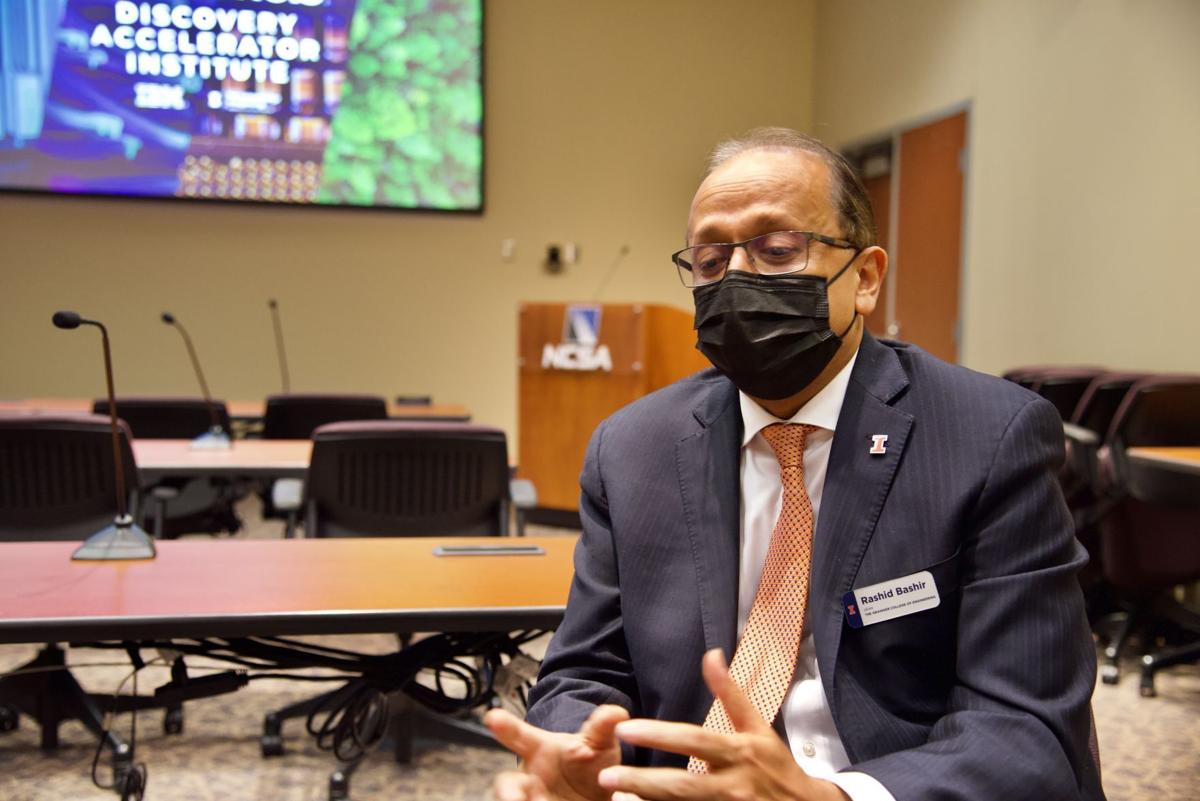 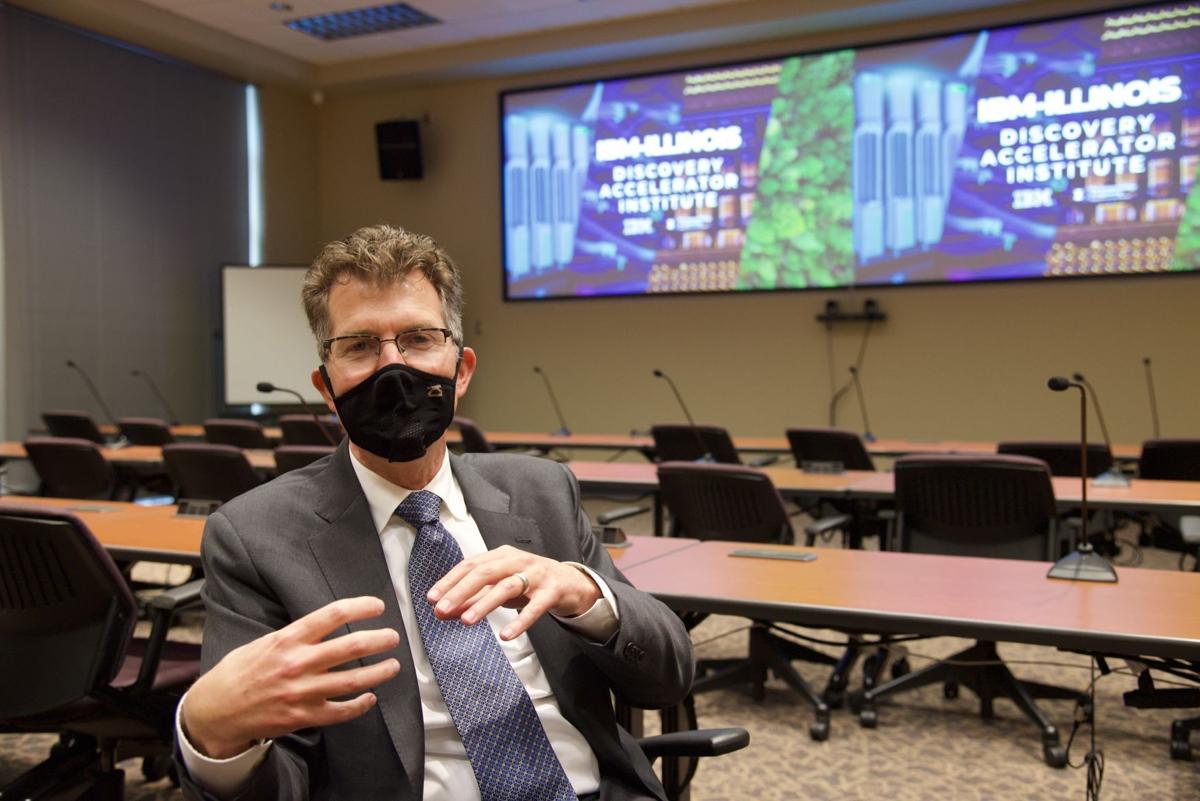 Grainger College of Engineering Dean Rashid Bashir announces the launch of the IBM-Illinois Discovery Acceleration Institute, the UI’s newest major research hub. His audience at the National Center for Supercomputing Applications on Tuesday morning included prominent researchers and administrators from the university and IBM.

URBANA — The University of Illinois has officially launched its newest cutting-edge research hub.

The IBM-Illinois Discovery Accelerator Institute — backed by a 10-year, $200 million combined investment from the UI, IBM and state of Illinois — has begun work on more than two dozen projects within the Grainger College of Engineering.

“IBM is exactly the right partner for the assets that Illinois has developed to lead in the 21st-century economy, building a deeper foundation for the people and places that will pay dividends for decades to come,” Pritzker said in his recorded appearance.

The current partnership stemmed from work at the IBM-Illinois Center for Cognitive Computing Systems Research, which began operations in 2016.

“As excited as we are about the innovation and the technology that will come, we are even more enthusiastic about the advancements in the human condition that it will drive in communities across the nation and across the world,” Jones said.

Administrators and researchers attached to the institute believe quantum research and artificial intelligence provide some of the best tools to tackle society’s biggest problems, such as climate change.

“Many of the problems we’re looking at require new materials, new structures, new processes,” said IBM Research Chief Operating Officer Jeffrey Welser. “We believe that by combining things like standard computing, doing simulations of new materials, with something like artificial intelligence, that can actually go and say, read hundreds and hundreds of research papers and even generate hypothetical materials itself, that helps accelerate the process.”

Since the institute’s initial announcement in May, IBM and the UI have been piecing together research teams over the summer, each with at least one representative from the company and university.

“We’re thinking of this as a new model for corporate-academic partnership,” Bashir said. “Students could be spending their time at IBM for their Ph.D.s, researchers can be on Ph.D. committees, advising students, working with them, helping with teaching in cutting-edge areas.”

“We hope the timeline of the facility is a few years away, but the process has already started,” Bashir said.

Until then, the institute’s projects will be housed in the Coordinated Science Lab on the engineering campus.

The College of Engineering declined to share the specific contributions going into the institute from the state, UI and IBM, though Welser said his company hopes to adjust research contributions year-to-year.

“We hope to be able to evolve where we put the dollars each year depending on what’s performing and growing the best,” he said.

In the remainder of the semester, the focus for the UI and IBM will be fusing the project teams together and getting the show on the road.

“Right now, we have the projects on paper, and we know who’s going to be working on them. They probably met on WebEx or Zoom at some point; it’d be nice for them to actually get together and build community,” Welser said.

“For the layperson, these technologies are going to change how they live or play in the future, in a good way,” Bashir said. “Just like 20 years ago, look at all that was developed that’s now in our commonplace use.

“AI is already being used in so many ways, and this pushes it to the next level.”