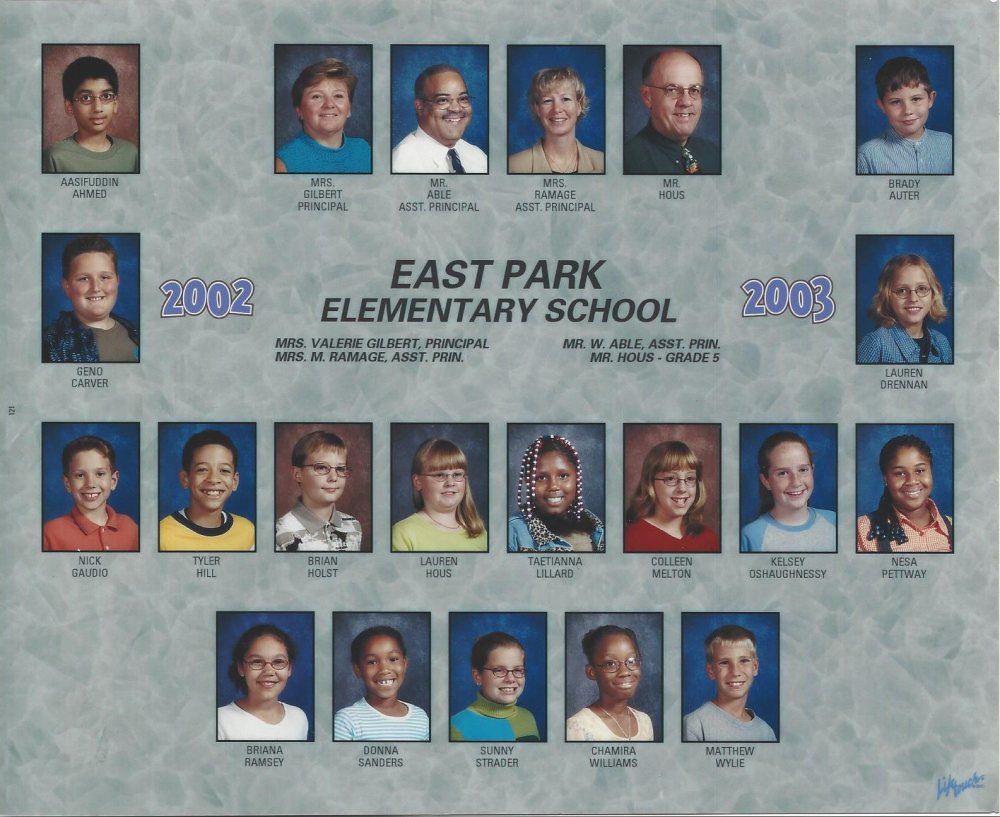 A composite of the 2002-03 Motivating Academically Talented Students class for gifted fifth-graders at East Park Elementary School in Danville. Class member Sunny Strader, middle of bottom row, now a documentary photographer, caught up with her classmates in adulthood to create '5th Grade Dreams.' 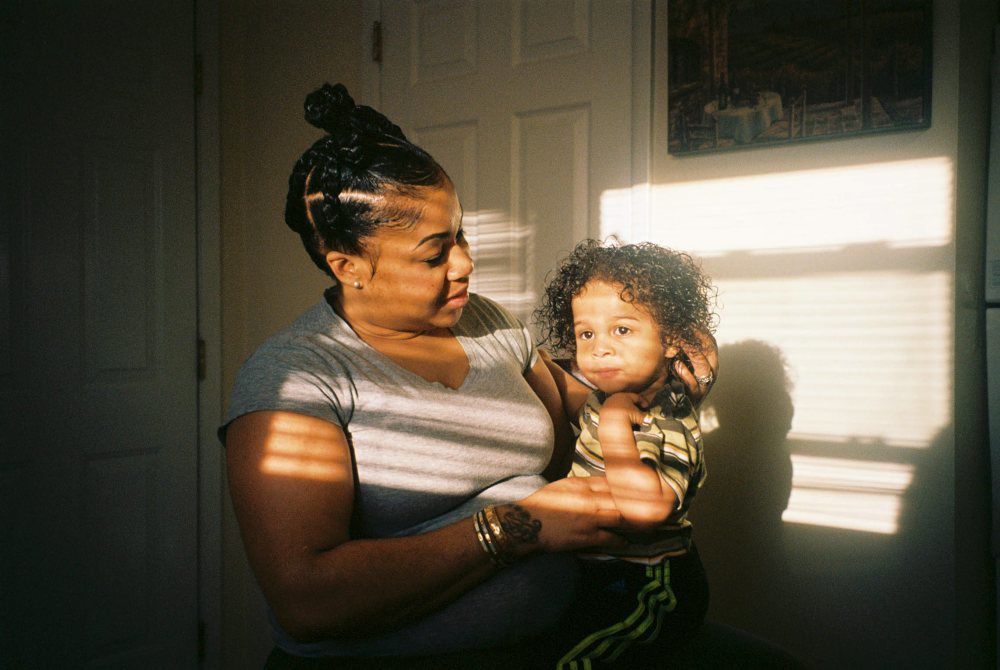 A photo of Nesa Pettway holding one of her children in her Urbana home is part of documentary photographer Sunny Strader's award-winning project '5th Grade Dreams,' which will be on exhibit at the Danville Art League from Saturday, Oct. 12, 2019, through Nov. 15. 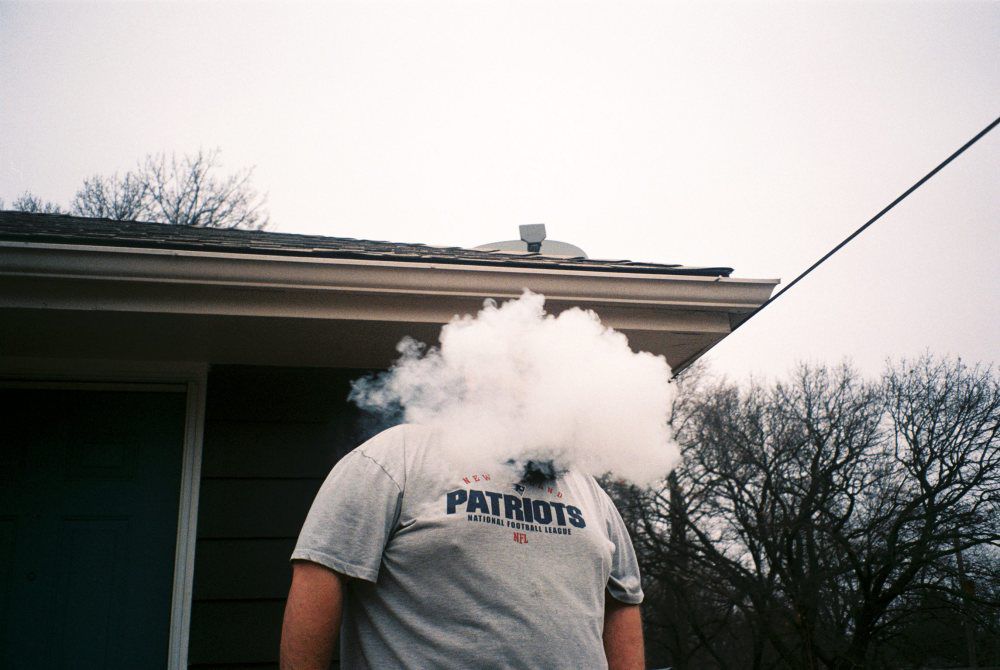 A photo of Geno Carver smoking a vape pen outside of his home in Des Moines, Iowa, is part of documentary photographer Sunny Strader's award-winning project '5th Grade Dreams,' which will be on exhibit at the Danville Art League from Saturday, Oct. 12, 2019, through Nov. 15.

A composite of the 2002-03 Motivating Academically Talented Students class for gifted fifth-graders at East Park Elementary School in Danville. Class member Sunny Strader, middle of bottom row, now a documentary photographer, caught up with her classmates in adulthood to create '5th Grade Dreams.'

A photo of Nesa Pettway holding one of her children in her Urbana home is part of documentary photographer Sunny Strader's award-winning project '5th Grade Dreams,' which will be on exhibit at the Danville Art League from Saturday, Oct. 12, 2019, through Nov. 15.

A photo of Geno Carver smoking a vape pen outside of his home in Des Moines, Iowa, is part of documentary photographer Sunny Strader's award-winning project '5th Grade Dreams,' which will be on exhibit at the Danville Art League from Saturday, Oct. 12, 2019, through Nov. 15.

A new photographic documentary called “5th Grade Dreams” lends a glimpse into the adult lives of the Danville school district students who were selected to participate in the Motivating Academically Talented Students program during its inaugural year at East Park Elementary in 2002-03.

After studying art history at DePauw University and working briefly in journalism, the Danville native and 2010 Danville High alumna moved to Los Angeles to work for documentary filmmaker Lauren Greenfield. After about a year, she set out on her own, photographing events and assisting other photographers to fund her own projects. She’s now a full-time artist and works as an art educator for at-risk youth ages 11-17 in Venice, Calif.

“I remember calling up some of my friends who I was still in touch with and asking, ‘Is this crazy, or should I do it?’ And they said ‘Let’s do it,’ but what they meant was both,” recalled Strader, who has been traveling around the Midwest and beyond for the past 2 years to reconnect with them.

The result: An up-close-and-personal look at these millennials as they chase their dreams — and put some of them on hold as they attend to their everyday responsibilities.

“This project is a fascinating look at how life isn’t always a straight line, but more how we prevail and move forward, no matter the circumstances,” photographer Aline Smithson wrote of the project on her website, Lenscratch.

The project, which won the Magenta Flash Forward 2019 award, has been featured in Aint-Bad Magazine, the Strange Fire Collective, Lenscratch, the Ukranian edition of Bird in Flight online magazine and Voyage LA and exhibited at the Hot Shot Muffler Garage in Los Angeles.

It makes its hometown debut Saturday at the Danville Art League and runs through Nov. 15. An artist’s reception will be held from 5 to 7 p.m. Saturday. The event is free and open to the public.

Ahead of the show, Strader took some time to speak to staff writer Noelle McGee about her passion for photography, this project and what’s next.

How did you become interested in photography and what career path did you take to get to where you are today?

I became interested at a young age — my dad always had his cameras around — but only considered it as a career option when I was 21. I was studying in Italy and was required to take a studio art class for my art history major. I learned how to shoot street photography and portraiture on black and white film. I loved working in the darkroom. When I came back to the U.S., I joined my college newspaper and tried to create some sort of career trajectory.

My time working as a photojournalist has very much shaped my artistic process and my knowledge of the world. When I moved to L.A., I really missed having a camera in my hand every day ... and having an excuse to insert myself into foreign situations. But I also realized that without being associated with a news organization, I was free to pursue whatever work I wanted to. And I wanted to return to working with photographic film (as opposed to digital), and I wanted to work with my past, Danville ... and with my classmates.

How did you come up with the idea for ‘5th Grade Dreams,’ and how did you convince your former classmates to participate?

(The idea) was probably a result of the reflection that occurs when one moves so far from home: Who am I, and how did I get here?

Sixteen out of 17 of us are in this project. ... I think creating a (private) Facebook group and bringing everyone into it, being very transparent with my intentions and sharing the photos I took along the way, made several people want to participate. It was fun. Now it’s become really natural with most people; they expect to see me whenever I’m in their hometown.

What are your memories of the class?

(Strader, along with two classmates, were able to source old photos from their peers, and Strader juxtaposed them with the photos of their adult counterparts.)

My memory is abysmal. But I’ve been blown away by the strange, funny details everyone else seems to remember. The most common memories had to do with the seasonal theater productions and musicals, a clubhouse we made in the class utility closet and playing “Oregon Trail” on the old Macintosh computers. Kelsey (O’Shaughnessy), Tyler Hill, Brian Holst and Tae’tianna all had outstanding memories.

What was your approach to telling their stories, and how did you manage to capture such intimate moments of their lives without making them feel uncomfortable or self-conscious?

That comes from the photojournalism background. ... I learned how to disappear (and) be a fly on the wall. For this project, I employ the same tactics, but it’s a bit more difficult because I know these people, and they are my friends. It’s also sort of strange to have someone from your past come into your living room and ask to photograph your life. I get that, entirely, which is why it’s been so important for me to keep visiting, keep rebuilding relationships and stay in touch. That’s how you make authentic photos — it’s not just about what camera you use or where you stand; it’s about how you love and how you connect with the world and the people in front of your lens.

You also tell your story through text. Was it easy to get your subjects to open up about their lives?

Perhaps my favorite part of making this work has been realizing how much weight is in our childhood friendships. The bond I have with my classmates, and the bond my classmates have with each other, cannot be recreated in adulthood. I think this is the magic that makes the interview portion of this project such a natural thing for me, for us.

Even after 17-18 years and really losing touch somewhere along the bridge from middle school to high school, we can still joke and really talk to each other. And now we have more of the language to articulate the yin and yang of our respective lives.

What type of feedback have you gotten from your classmates? Are any coming to the show?

I think at least eight of my classmates have confirmed they’ll be at the opening, and two others who plan to see the show when they’re in town later this month. Feedback has been good. After sharing the project’s comprehensive website (5thgradedreams.com) last spring, Nesa (Pettway) wrote: “I shed a tear of joy reading mine. I was having a really terrible day yesterday. And I read it and it instantly cheered me up just seeing how far we’ve all come in life.”

Do you have plans to continue this project into the future, and what’s your ultimate goal for it?

Yes, I plan to keep seeing my classmates as time/money allows. I plan to keep taking this project one day at a time, just like I try and live my life. I have learned that if I let things unfold organically instead of trying to force it, the photos will reflect that.

Can you talk about any future projects or career goals?

I have a couple other project ideas in their beginning stages, including collaborating with Charlotte’s best friend, Peter.

(Charlotte Caron, “a 70-year-old Hollywood hustler whom I met on Craigslist,” was the subject of her zine, “Charlotte by Sunny,” a finalist for the Lucie Foundation Book Prize.)

I’ve also been experimenting with screenwriting and motion pictures. I figure it must be the Hollywood influence.

Sometimes I think about going back to school and getting an MFA so I could eventually teach at a college level, but I know that I’m not much of an academic. I do, however, consider myself an eternal student of the human realm.

What are you doing at home or in L.A. when you’re not behind your camera?

I like to cook, propagate my houseplants, see live music and walk my little chihuahua, Disco. I could definitely stand to live a more balanced life. But I’ve always been obsessive, and my art is my medicine.