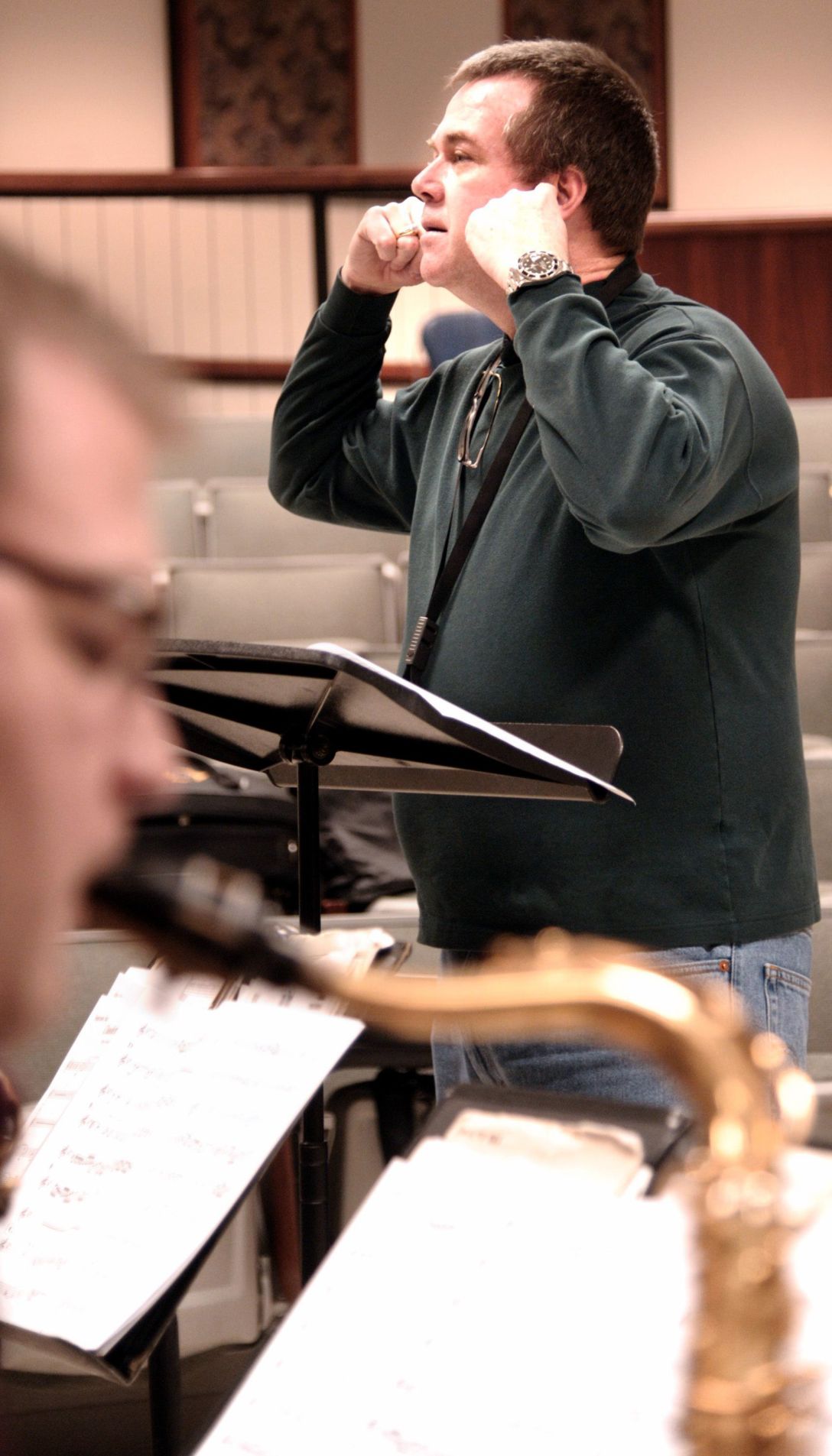 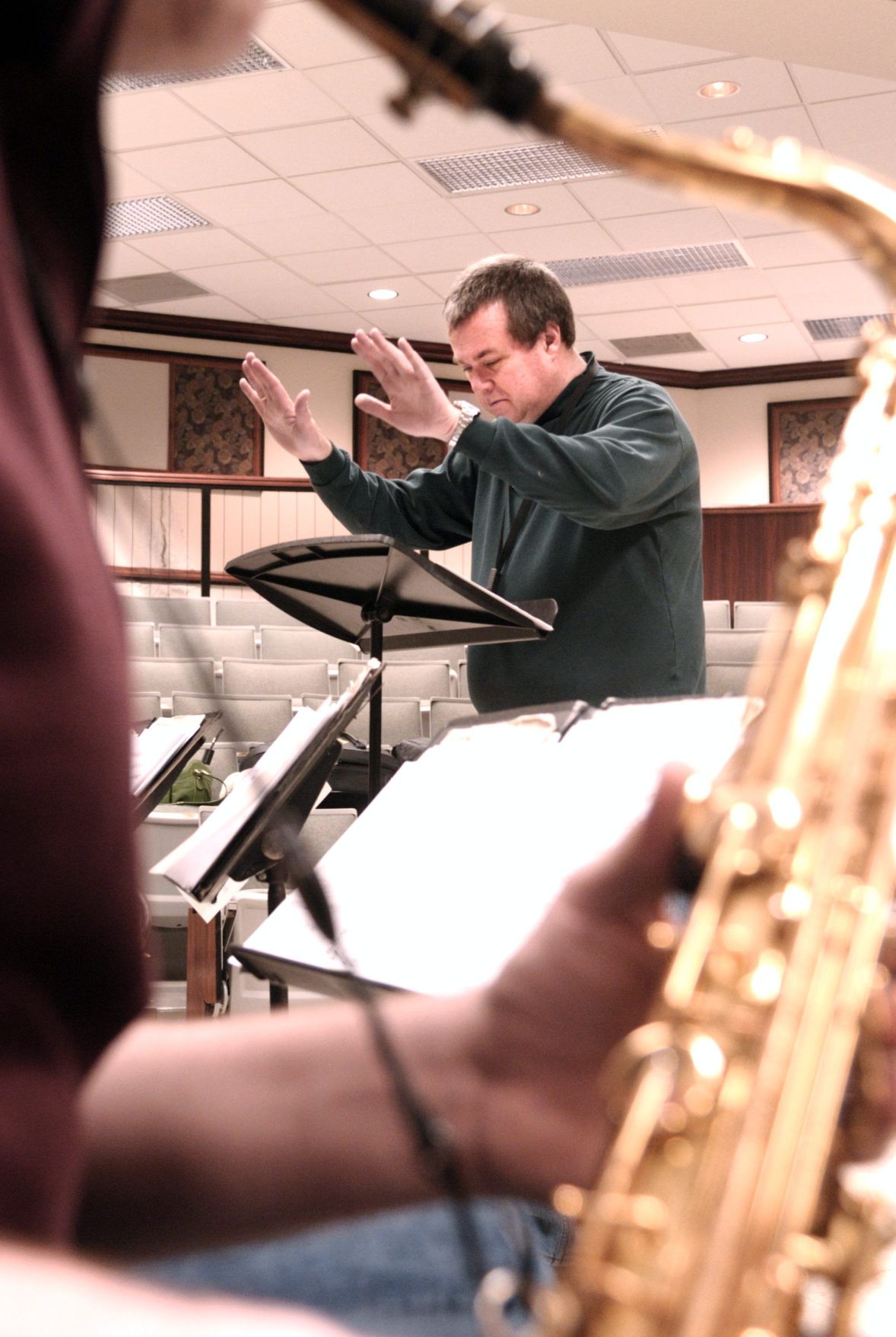 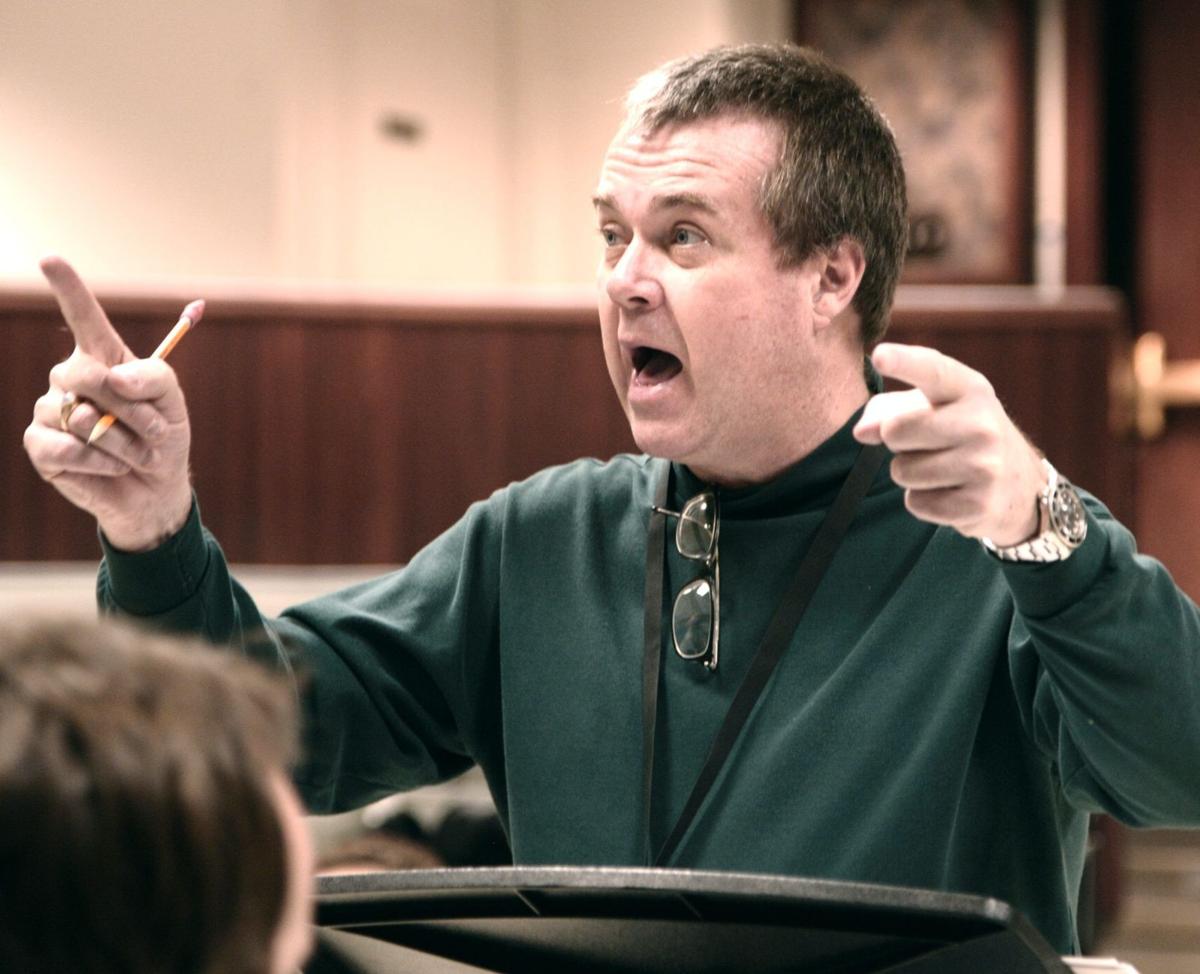 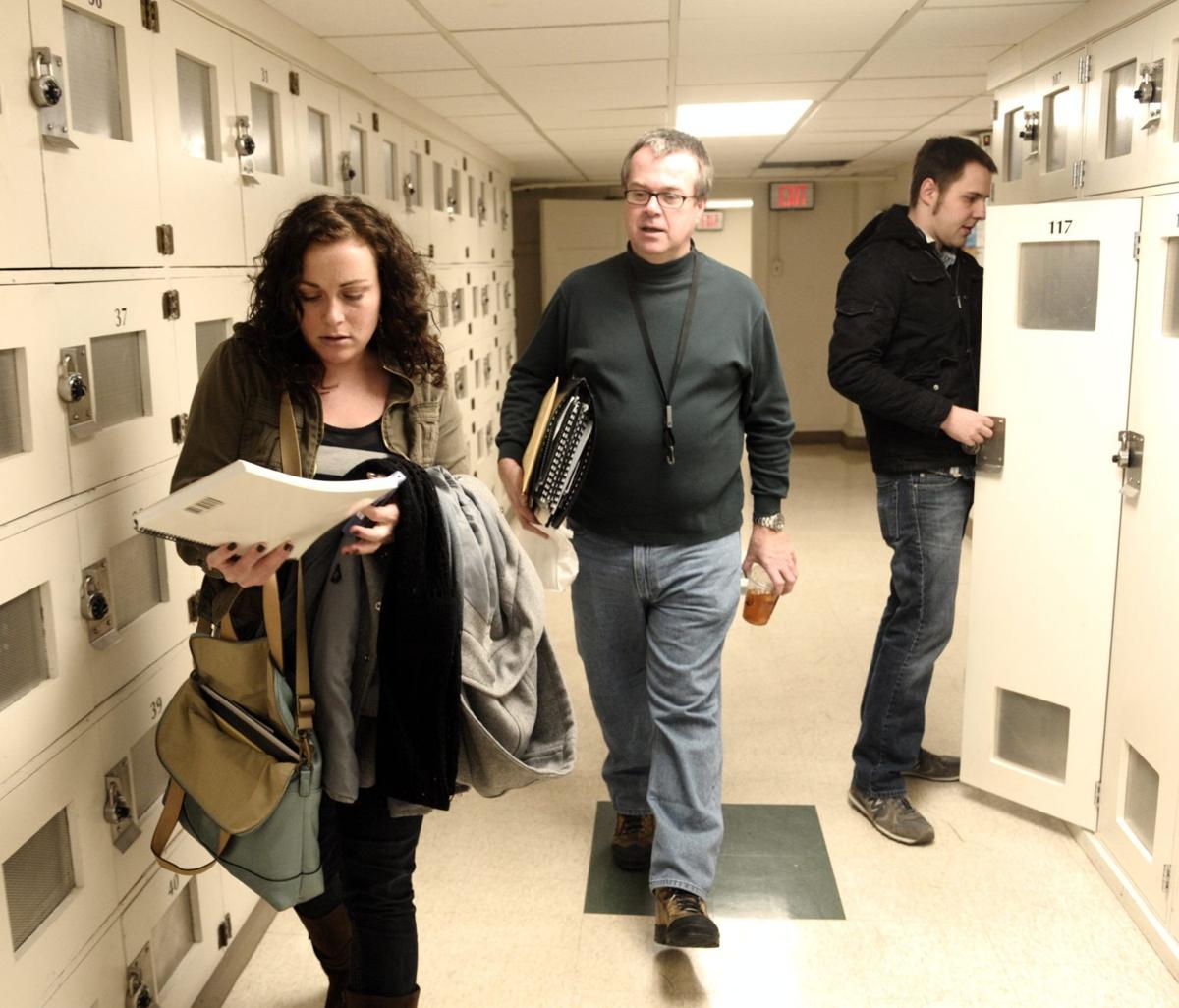 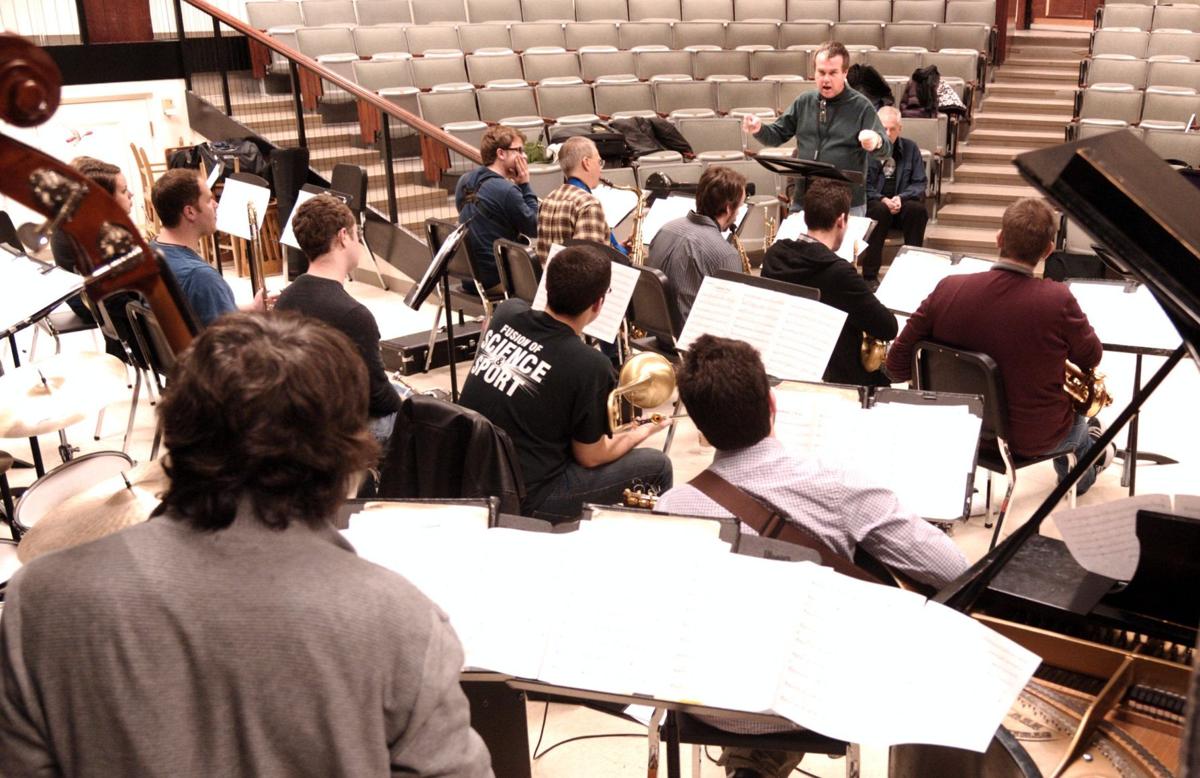 Chip McNeill walks down the hall in his black sneakers as jazz music floods the basement of Smith Hall. He waves with his left hand to a couple of students and clutches a soprano saxophone in his right.

He looks at his watch and picks up his pace, realizing he's late. In Room 11, a small space with a set of drums, a piano and an old organ, he gently places his instrument on the organ bench as he greets the students preparing for the day's jazz rehearsal.

The drummer tunes his instruments, the guitarist adjusts the volume on his amplifier, the vocalist tinkers with her mic, the saxophonist fixes his reed, and the piano player sits patiently. Chip, a 51-year-old University of Illinois jazz professor in his 11th year, adjusts his Levis and rolls up the sleeves of his black turtleneck.

He is about to start class when the saxophonist receives a text from a missing student, the bass player. He woke up late and will be here ASAP.

His mother was a vocalist, and his father was a saxophonist. Music is the first thing Chip remembers, specifically jazz records playing in his house. He was exposed to all kinds of music, but jazz was his favorite. As with many career musicians, it all started with the piano, and Chip began playing at age 6.

At 15, he started playing the saxophone. When he played the sax it was like an extension of his voice, an organic sound. Air goes in and music comes out, creating something out of nothing. He was hooked.

"They are like my toys, my favorite toys," Chip says of his saxophones. "I'll never outgrow them.

"They've always been that, and they always will be."

Chip couldn't imagine becoming anything other than a professional jazz performer. It was the only career path he considered. Nothing fascinated him as much as jazz music. He needed to play. He certainly never thought of teaching.

"Performing is a part of me," he says.

The students discuss the music they're writing, as Chip sits quietly on the organ bench. They are about to start playing a song written by the saxophonist. He just finished it last night, so the flow is rough.

"Let's take it slower than necessary until we get a handle of the notes," Chip says in a friendly tone. He then takes a look at the sheet music and challenges the saxophonist.

"In the second bar, you have an A-flat in the bass and an A-sus chord."

"Yeah, it's messed up," the sax player says.

At that moment, the bass player walks in.

Chip is no stranger to rehearsals. He toured with jazz legends Woody Herman, Maynard Ferguson and Arturo Sandoval. He started touring with Herman the day he earned his master's in studio jazz writing from Miami University. Despite being married, Chip took the gig that would force him on the road for six months at a time.

"When gigs come along like that, you take them," he says.

Chip doesn't remember specific performances. With so many in the last 30 years, they are a blur. But he remembers the places he traveled: Japan, Europe, India, Australia. He remembers Carnegie Hall, Royal Albert Hall, the Sydney Opera House.

He remembers the music he wrote, particularly when he was musical director for Ferguson and wrote music that always left room for instrumental solos. Solos allow musicians to be "in the moment," so immersed in the music that they forget all about technique, practice and experience. It's what Chip calls "pure expression." At those moments, his saxophone is an extension of his body.

"The moment I step on the stage, I stay in the moment and in the present," he says. "Otherwise I can't give all of myself to my music."

Once the tardy bass player is ready, the combo picks up again. The music is starting to work. The solos are fluid, the bridge is connected to the chorus and the students are enjoying themselves.

"You're plenty active during the melody," Chip tells the drummer. "In fact, I think you can play that a little quieter. Make more out of each of the phrases."

The guitarist chimes in with some new chords.

"Yeah, there you go," Chip says. "That's the right idea. We're getting there."

That's the challenge: discovering your own style. It's impossible for musicians to immediately decide on their style. It takes experience, practice and countless mistakes. Chip doesn't try to emulate his heroes, but he takes pieces from the likes of Coltrane and translates them into his own. Developing your sound is like creating your own voice.

"The sound is in the ear of the beholder," Chip says.

It takes sacrifice to find that special sound. Chip spent decades searching for his sound. He spent holidays and birthdays away from his wife and family. In the end, the marriage failed. He has no children. All of his close friends are musicians. Music is his life.

"I probably would have had a family if I did something else, if I was a plumber or something," he says. "People go home and leave their work at work. Here, with this, you don't, ever. Music is like any art. You never leave it; you're constantly practicing to get better at it. Because you have to."

Chip never planned to be a teacher. In fact, he was anti-teaching. Music wasn't learned in a classroom, he believed. It was learned through those hours and years of experience.

"I did most of my learning myself, I have to say. Even though I had good teachers along the way, I probably didn't take advantage of them enough," he says. "I took advantage of the fact that jazz allowed me to learn myself."

It was time for a break, despite his love for performing, and he took a teaching job at Virginia Tech University, where his then-wife was a vocal professor. The stable income drew him in. Eventually, he accepted his teaching position at the University of Illinois, where as head of the jazz studies program in the School of Music he would create the bachelor's, masters and doctoral programs in jazz performance. Although teaching has its financial advantages and allows Chip to be selective when choosing gigs, it also came with a surprising dividend:

"The biggest thing I've enjoyed is seeing the success of students."

The room is jamming by the end of class. The music the saxophonist wrote finally has a groove to it, and Chip has come alive. His feet tap to the tempo, his head bobs and even swoops when a great phrase is played. With 10 minutes left in class, Chip places his hand on his soprano saxophone. He is wondering if he should pick it up. He takes off the reed cap, then replaces it. But with two minutes left, he can't resist.

The funky groove pairs the guitar and saxophone in sync, and the deep lower chords of the bass draw him in.

"Play the vamp a couple times," he says. "I just want to play with you guys for a minute."

And Chip dives into a solo. After a long high note, a series of uncountable notes follows and progresses into a half-a-minute solo. His face turns from pale to red. His eyes stay closed and his head faces the floor. Then he abruptly waves the combo to stop. He tells everybody they need to play with more confidence. He suggests some different chords to the guitar player. He tells the bass player to be clearer about the notes he's playing.

Samantha Kiesel is a University of Illinois journalism student. This story was done in a version of Professor Walt Harrington's literary feature writing class during the fall 2012 semester that included students and News-Gazette staffers. Funding came from the Marajen Stevick Foundation.