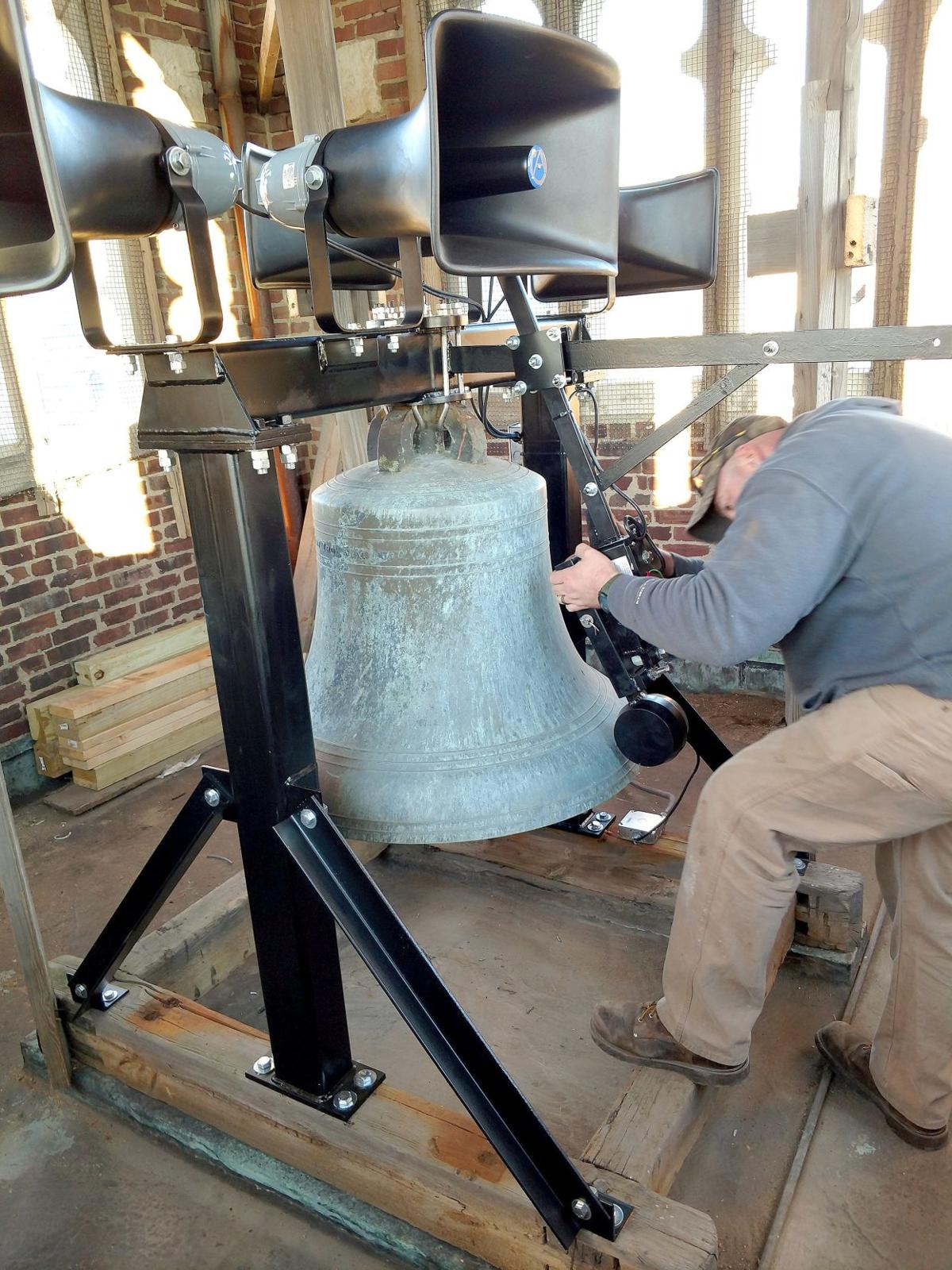 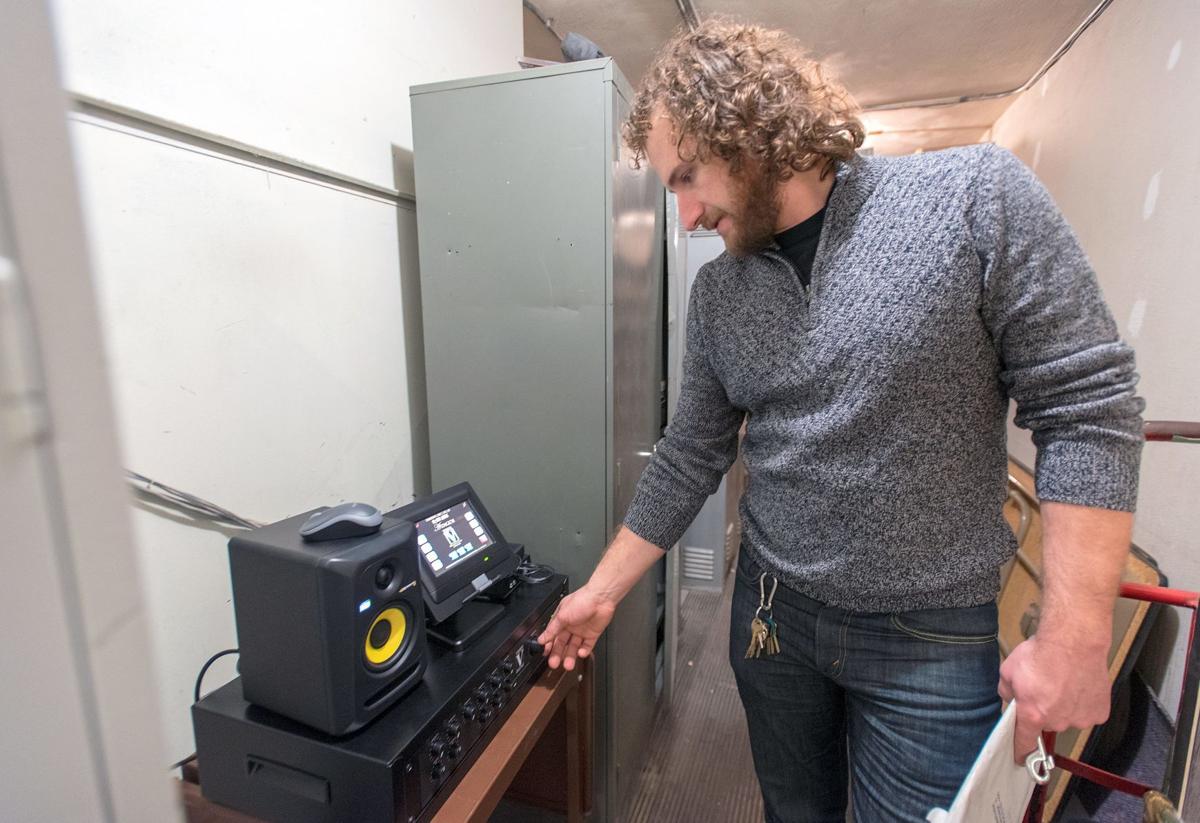 CHAMPAIGN — Members of a venerable downtown Champaign church will be getting a Christmas present this year they have long awaited — the ringing of a 151-year-old bell that's been out of commission for decades.

"I'm excited. It's just so neat," said Kristin Geis, one of the parishioners instrumental in a three-year campaign to get the bell tolling again at the First United Methodist Church.

It was during the summer of 2015 when she and her family, at West Side Park for a church picnic, looked across the intersection of State and Church at their magnificent church edifice and wondered why the 1,000-pound bell didn't ring.

They began asking longtime parishioners about it. No one seemed to be able to recall the last time they heard it.

A deteriorated wooden A-frame holding up the 1,000-pound cast bronze bell was the reason for its silence.

Building manager Jason Mack explained, in a May story in The News-Gazette, that the bearings on the frame had rusted and prevented the bell from swinging. The plan was to replace the frame and bearings so that the bell could freely swing again.

Geis and her partner in bell restoration, Elizabeth Boehm, and their daughters, Olivia Geis and Mara Boehm, all took active roles in researching the history of the bell and working up a presentation to persuade parishioners it was worth the money to fix it.

"By the end of August, we had the money in hand," Geis said. "We got several different estimates from several companies."

The church chose the Cincinnati-based Virden Company, the same firm that installed an electronic bell system there about 40 years ago.

But they tweaked the original plans in a way that allowed them to get more clang for their buck.

"It's not going to ring pulling an original rope. We modified that to have it be stationary and have a pull hammer instead," Geis said. "It will increase the longevity."

The toll hammer, she said, "is a mechanism that sits to the side on the ground and will hit the bell with two different forces, which will mimic the sound of the ringing bell without the bell having to swing."

The old A-frame was iron and wood. The new frame is welded steel, Mack said.

"There's a one-year warranty on the electric strike. It's powder-coated steel. It should be good for probably at least 100 years," Mack said.

The hammer, about 4 inches wide and 6 inches in diameter, is solid steel and weighs at least 30 pounds, he said.

Having the bell be stationary greatly reduces the maintenance.

"We will not have to oil parts, not have to worry about things. We can leave that door shut," Geis said of the door to the bell tower, which she added takes "quite a process" to reach.

Mack was present earlier last week when a team from Virden installed the new frame over three days.

"For the installation, they removed all the old hardware. They removed the frame and yoke and lowered those down from the tower with rope and used rope to pull up the new A-frame and yoke," he said.

The majority of the work was done Monday and Tuesday with finishing touches on Wednesday and testing Thursday.

The modification to the bell design allowed the church to afford to replace its aging carillon that dated to the 1970s.

"It will play thousands of hymns," Geis said.

A remote control will allow the operator to switch between the carillon and the church bell, which has only the single tone and is meant as a call to worship or to toll on the hour.

Fittingly, the bell will mark its rebirth on Christmas Eve. Bell revivalists are planning a bigger, as yet undetermined, celebration for 2019.

"Ray, our organist, will do a recital before each service (4, 7 and 11 p.m.) and then after his recital, they will get to hear the bell," Geis said.

Individual donations for the project, which ended up costing just over $25,000, ranged from a few bucks to a few thousand dollars.

Geis said she politely rejected the suggestion of naming the bell after one of the larger donors.

"This is something our kids and our older church members have gotten behind," she said. "This has been an entire church effort. Everybody has been excited about this."