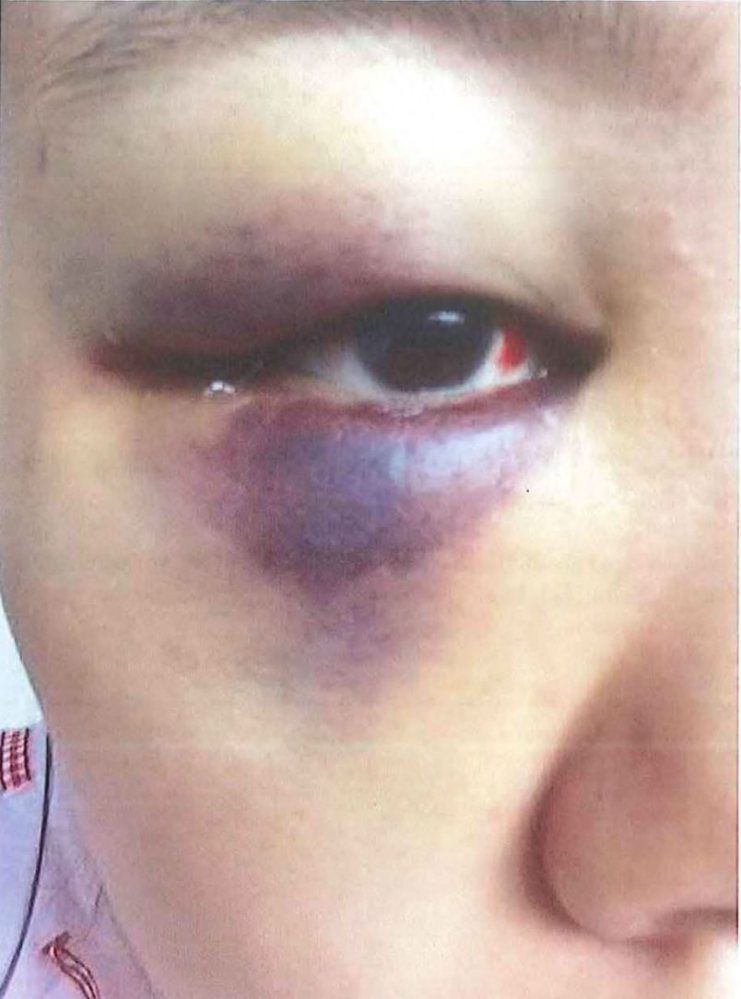 This picture of one of Gary Xu's alleged victims was included in a federal lawsuit filed Tuesday, Sept. 10, 2019, accusing the former head of the University of Illinois' East Asian Languages and Cultures department of taking advantage of his position and sexually and emotionally exploiting his young Chinese students. 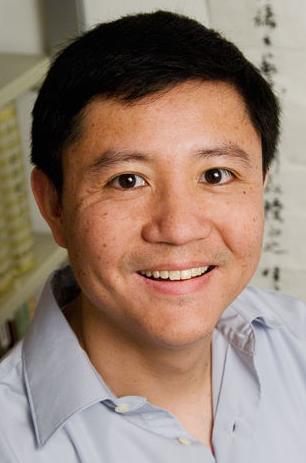 URBANA — The former head of the University of Illinois’ East Asian Languages and Cultures department took advantage of his position and sexually and emotionally exploited his young Chinese students, a federal lawsuit filed Tuesday by three of his alleged victims says.

Then-Associate Professor Gary Xu also allegedly threatened the life of a professor at Wesleyan University in Connecticut who publicized accusations against Xu in March 2018 on Chinese websites.

“We think that Gary Xu is a very dangerous man. Our goal is to prevent him from being able to harm other women and students,” said Alison Wilkinson, an attorney with New York-based law firm McAllister Olivarius. “Our secondary goal is to invoke some systemic change at the University of Illinois and at other universities, where students can be taken advantage of by professors without any oversight to prevent that from happening.”

Xu was head of the East Asian Languages and Cultures department from 2012 to 2015, the same time frame as many of the allegations in the lawsuit. He was placed on paid administrative leave in January 2016 and resigned in August 2018, the UI said. 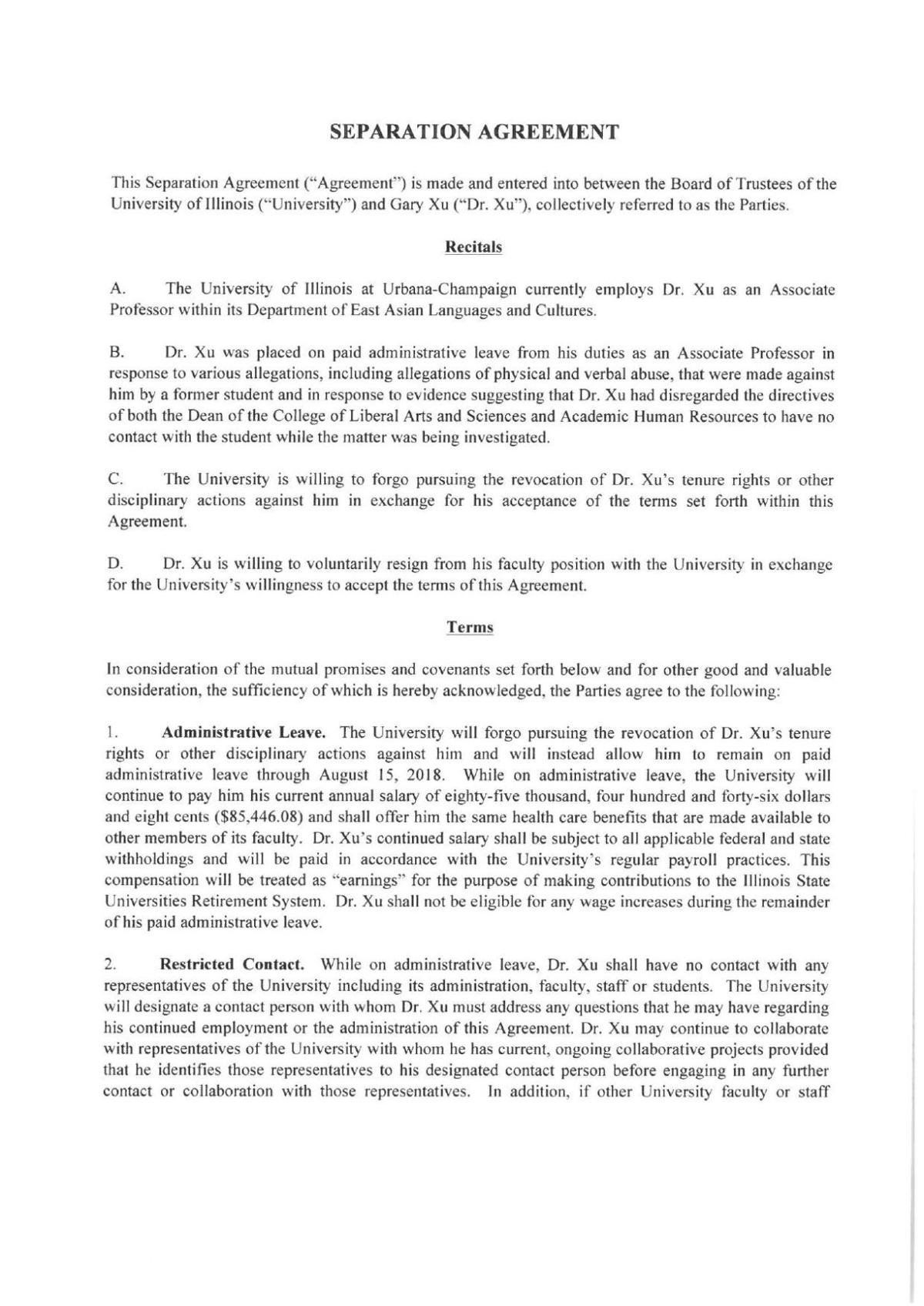 On his way out, the UI paid Xu $10,000, according to his separation agreement.

Wilkinson said they’re considering a separate lawsuit against the UI.

While the current lawsuit doesn’t make formal allegations against the university, it accuses the UI of not doing enough to investigate Xu after it first received complaints in 2014.

“We are aware of the filing and are reviewing it. We cannot comment on any of its contents at this time,” UI spokesman Chris Harris said.

But he said in a statement, “Issues of sexual misconduct and sexual harassment threaten every aspect of our university missions, and they inflict personal and professional harm on members of our community. The university investigates and takes appropriate action whenever conduct is reported that may jeopardize or impact the safety or security of our students or others. The current administration is reviewing and revising disciplinary processes to allow us to take quicker and more forceful action when employment misconduct is proven.”

A campus committee is reviewing procedures for handling faculty sexual misconduct and is expected to produce recommendations this fall.

Xu, who lives in Champaign according to the lawsuit, could not be reached for comment. 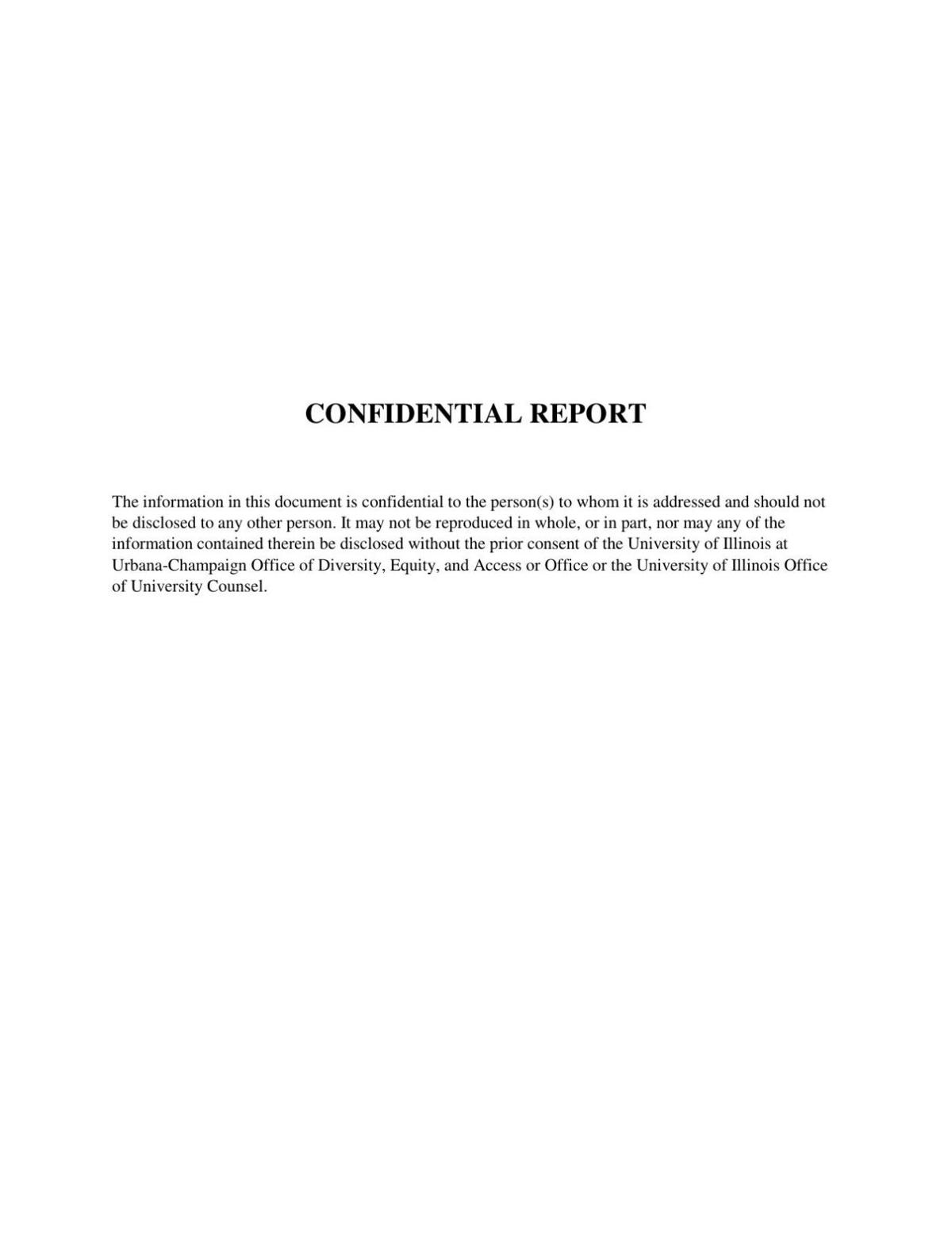 In his response to the UI during its investigation, he called the allegations "preposterous" and "full of speculations, imaginations, unfounded accusations, and false statements."

And in April 2016, he called the UI's draft report "full of factual mistakes, logical inconsistencies and fallacies." He said he followed the no-contact directive "with a few exceptions" and said the report relies on "words that were thrice recanted."

It’s alleged that over a period of two years, Xu raped an undergraduate student of his multiple times.

He has not been charged criminally, though the lawsuit alleges he frequently pressured his victims to recant their accusations to authorities.

The allegations made in the lawsuit claim that:

“She was new to the country, isolated and so young,” the lawsuit says. “She was the perfect target for him.”

The woman is named in the court filing, but News-Gazette Media has chosen not to publish her identity in accordance with its policy not to identify alleged rape victims.

She was taking an independent study course with him, and they started dating that fall, despite Xu’s marriage and two children. (He divorced his wife last year, according to court records.)

Xu first was violent with her that November, pushing her against a wall when she mentioned her ex-boyfriend.

Shortly after that, the woman attempted suicide, and Xu insisted she skip eight therapy sessions at the UI she was supposed to attend.

Not long after that, Xu showed up to the woman’s apartment and raped her violently. But the relationship continued, with Xu paying her rent and giving her other cash gifts, the lawsuit says, “with the unstated quid pro quo that she would sexually service him whenever he chose.”

Xu got the woman pregnant in early 2014 and then forced her to get an abortion, scheduling an appointment for her without her knowledge and giving her $400 in cash to do so.

“Despite it going against her deeply held beliefs, she reluctantly agreed to terminate the pregnancy,” the lawsuit says. “She felt she had no other choice.”

Not long after this, the woman attempted suicide again, and Xu drove her to the hospital, beating her on the way.

A police report notes the bruising and indicated the “professor who was with her” was suspected of causing the bruises.

In April 2014, she called her adviser and made her first Title IX report with the UI.

Xu pressured the woman to drop the report, the lawsuit says, which she eventually did.

That summer, the woman went to China with Xu for an art exhibit, but after she refused to have sex with his colleagues and ripped Xu’s passport, Xu punched her multiple times, kicked her in the stomach and injured her legs.

A photo in the lawsuit shows the woman’s right eye bruised and swollen, and she was too embarrassed to return to her family while in China and instead returned to Xu’s hotel. He then allegedly raped her again.

Back at the UI

The woman filed another report with the UI, which issued a no-contact directive to Xu.

But the lawsuit alleges he quickly violated the order, which the woman was apparently never told about, and punched, choked and held a knife to her throat at her apartment.

“He told her that if she did not do as he said, he would not let other professors write letters of recommendation for her and would do all he could to hinder her college education and prevent her from graduating,” the lawsuit alleges. “He threatened to send her back to China.”

Xu allegedly gave a script to the woman for how to withdraw her report to the UI, which she did that fall.

In April 2015, the UI told Xu he had violated his no-contact directive, but the woman “was nonetheless allowed to remain in (his) class,” the lawsuit says.

That summer, while he helped her move to a new apartment, he allegedly tried to run her over in his car after she looked through his phone and found evidence of another affair.

The woman’s adviser came to the scene — the Champaign Public Library — and she then spoke with UI officials again, the lawsuit says.

Within a week, she attempted to get a restraining order against Xu, but he allegedly sent her a death threat and threatened her family.

“In an email dictated by Xu,” she recanted the allegations, according to the lawsuit.

It also alleges that in May 2016, when the UI issued its final report, Xu pressured the woman to recant, sending her a draft of what to say, which she then sent to the UI.

That spring, she also posted her story anonymously on the Chinese social media website Weibo.

Though she didn’t name Xu, a commenter did, and Xu allegedly had one of his friends tell the woman’s father that his daughter “was a lunatic,” the lawsuit says.

“Xu’s lies were humiliating and caused an irreparable rift between (the woman) and her traditional Chinese father,” the lawsuit says. Her “ruined relationship with her father remains deeply upsetting to her.”

From 2012 to 2015, Xu is also accused of taking advantage of Xing Zhao, a doctorate student who left the University of Kansas to study under Xu.

When she first visited the UI, Zhao went to lunch with Xu, who allegedly quickly made the conversation sexual.

“He said that Zhao resembled his ex-girlfriend so much he wondered if they were related. Zhao felt like he was testing the waters to see if she would be sexually available to him,” the lawsuit says. “Not wanting to harm her chances at the school, she answered that there was no relation and then tried to gently steer the conversation in another direction.”

He allegedly had her work on his paid commercial projects for little or no pay, according to the lawsuit.

Xu allegedly assaulted an assistant at an exhibit in China in December 2013 in front of Zhao.

“She knew now that the penalty for disobeying Xu could include not only losing her university place, funding and status in the U.S., but physical assault,” the lawsuit says.

He also allegedly attempted to kiss her and disparaged her intellect, the lawsuit says, and she left the university in 2015 with a master’s instead of the doctorate she had hoped for.

The lawsuit also alleges retaliation against Ao Wang, a professor at Wesleyan University who publicized allegations against Xu on Chinese websites in March 2018.

Xu allegedly had his friend show Wang a text message from Xu with a death threat, and later allegedly bribed Wang.

And in China, he sued Wang for defamation, the lawsuit says.

The following month, Wang was treated for heart palpitations in the emergency room due to anxiety, according to the lawsuit.

“Ao Wang had not suffered from anxiety or any cardiac issues prior to Xu’s threats,” the lawsuit says.

'Before the clock starts running on (Gary) Xu's response time, we need to serve him. However, he has left the jurisdiction and has kept his current location well-guarded, which has made service difficult,' said Ali Wilkinson, an attorney for the New York-based firm representing the plaintiffs.