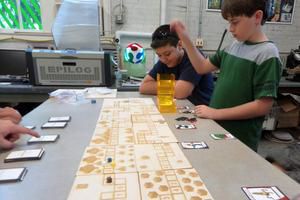 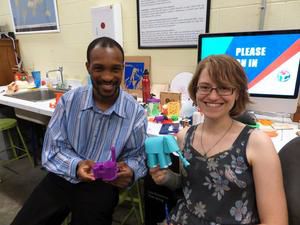 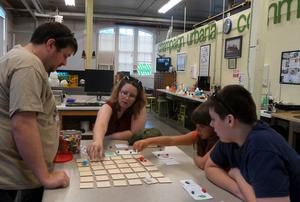 It’s a Friday night on campus, and three 11-year-olds are deep in thought over their new board game. That they made themselves.

It’s just the latest burst of creativity to come out of the Champaign-Urbana Community Fab Lab, a gathering place for budding entrepreneurs, researchers, artists, businesses, engineers and ordinary people (including kids) who just want to make something cool.

The prototyping and fabricating equipment would make any inventor drool: 3-D printers that produce figures straight out of the "Minecraft" video game (ask any addicted 10-year-old); laser cutters that etch pieces for the board games; user-friendly computer design programs; a sewing room where creators stitch wearable electronics with conductive thread; wood-cutting and milling machines; soldering and electronic equipment for cutting circuit boards.

The keyword is "open source" — both for software and ideas. The goal is to teach people how to use free or inexpensive tools so they can produce things themselves.

The Fab Lab has open hours where anyone can walk in and get help with a project, paying only a nominal fee to use the machines or materials. You can also can bring your own materials and pay $1 to use the laser cutter for five minutes, for example, plenty of time to bring an idea to life, said staff member Chinedu Onyejekwe. Or you can use the lab’s free scrap wood for a trial run.

"There are a lot of brains that you can get ideas from," said McCreary. "When you’re in the same room talking about it, you can construct things you never would have been able to do by yourself in the basement."

Not all the ideas are high-tech. One resident came in to use the vinyl cutter to make numbers for his basement stair risers. Another girl and her mom who had enrolled in the wearable electronics workshop came back during open hours to make a light-up pillow and a UI wristband.

And even more than some other maker labs, the Fab Lab is dedicated to community.

Created in 2009, the lab has a four-part mission: to support research, entrepreneurship, art and education, as part of the University of Illinois’ public engagement efforts.

The lab hosts workshops and camps for ages 9 and up, and sponsors them at schools, the Don Moyer Boys & Girls Club and other locations. It also has a community partner network, including a second location at the Urbana Free Library with a Teen Open Lab, and plans to sponsor mobile Fab Labs across the state.

"We noticed a lot of the people visiting the lab were either connected to the university or relatively privileged individuals," Ginger said. "We wanted to get to those who are underserved through partnerships and alternative locations."

Ginger estimated about half the lab’s service is to the community, as opposed to the university, which is "very unusual. And awesome."

Who are its customers? Companies that want to make new prototypes but don’t have the equipment. Artists or crafts people making things for Etsy or the farmers’ market. Students or faculty who use it for projects or research, including an engineering student who hopes to use his "quadcopter" prototype for a Kickstarter campaign for his new business.

"A lot of people just come in to have fun, though," McCreary said.

Kids are a big part of the clientele, through the various workshops, school programs and summer camps, which have continued to grow.

McCabe, a designer with a 12-year-old son, was interested in teaching kids more about game design, something he has loved since he got his first Nintendo set in 1985.

"For a lot of kids, video games are pervasive in their everyday lives," and many of them want to be designers, he said.

The parents wanted to start by having the kids create a board game, then write and design a video game with a new 3-D graphic program called Project Spark. The Fab Lab was the perfect partner, McCabe said, because it had the right equipment and also upgraded its computers to run Project Spark.

"At work, if we do a board game, we find bits and pieces of other games to do that. Here they were actually able to create something. Working at this facility is really, really cool," McCabe said.

Kids at the game-design camp couldn’t agree more. Especially about the 3-D printer.

"I liked how you got to play each other’s board games," said Henry Johnson of Champaign, who invented a "Diamond Digger" game based on — what else? — Minecraft.

"I liked the freedom of it," added Iona Hopping of Champaign. "It wasn’t like a regular camp that was just very strict about ‘Get in line, do this, do that.’"

Ginger said schools too often teach kids facts and test-taking, but when they get out of college the emphasis is on experience and results. The Fab Lab fills that gap with a focus on project-based learning — helping kids to be curious, work together and "explore their own identities through creation and question how the world works around them, both in terms of what’s inside of black boxes (technologies) and in terms of questioning how social structures work (why isn’t the princess rescuing Mario?). I want them to not only learn to understand the world around them, but also actively and thoughtfully change it."

Julie Wurth blogs about kids and families and covers the University of Illinois for The News-Gazette. Leave a comment below or contact Julie at (217) 351-5226, jwurth@news-gazette.com or Twitter.com/jawurth.

Middle: Chinedu Onyejekwe, left, and Virginia McCreary, who work at the Fab Lab, display some of the prototypes made at the lab. Photo by Julie Wurth