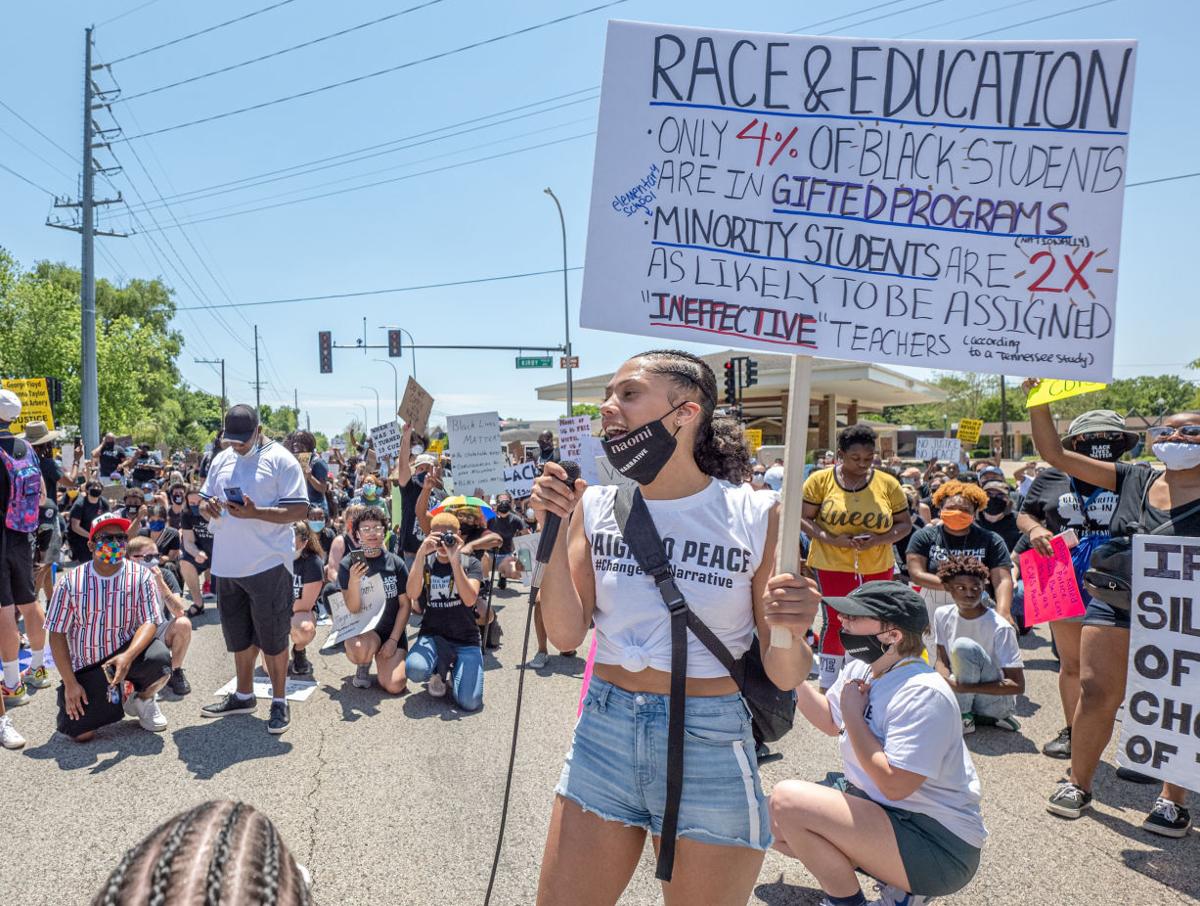 2020 Champaign Central graduate Naomi DuPree leads the march she helped organize Saturday, June 6, 2020, at the intersection of Kirby and Prospect avenues in Champaign. 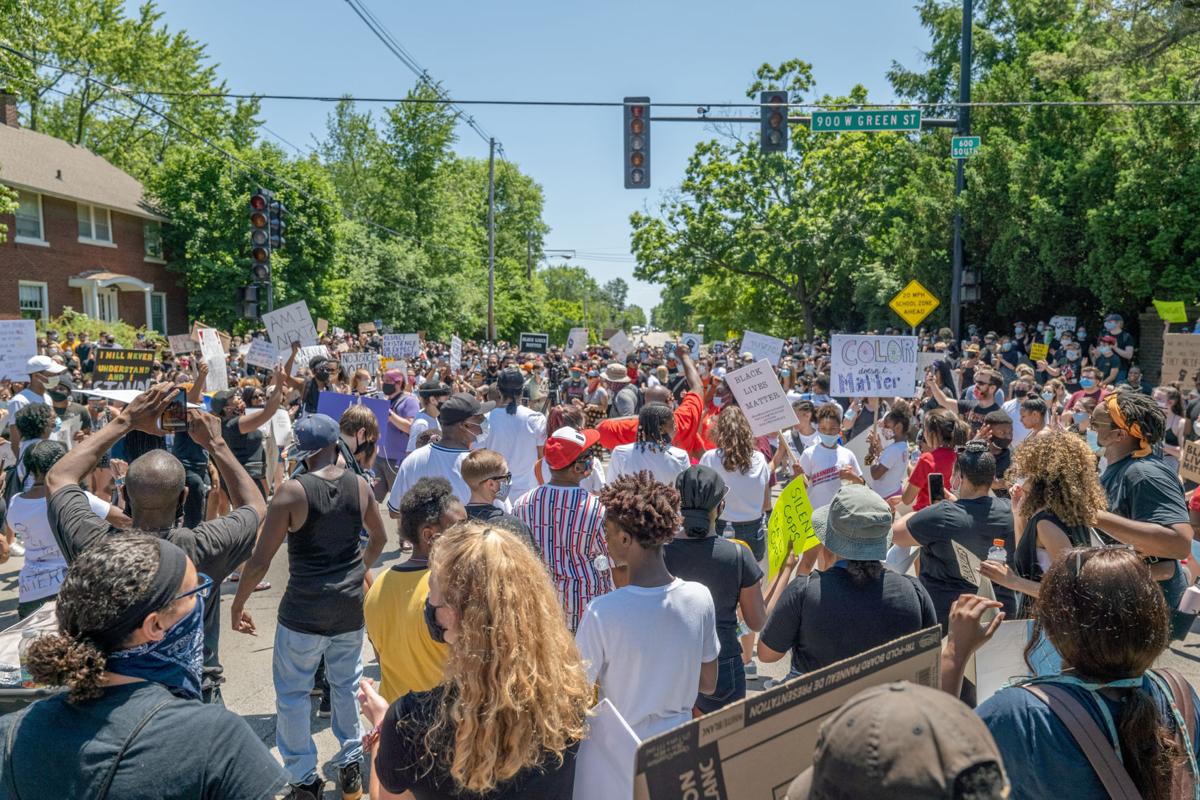 Protesters gather at the corner of Green Street and Prospect Avenue during a march Saturday, June 6, 2020, throughout Champaign.

The scene at Prospect and Kirby avenues during a march Saturday, June 6, 2020, through Champaign. 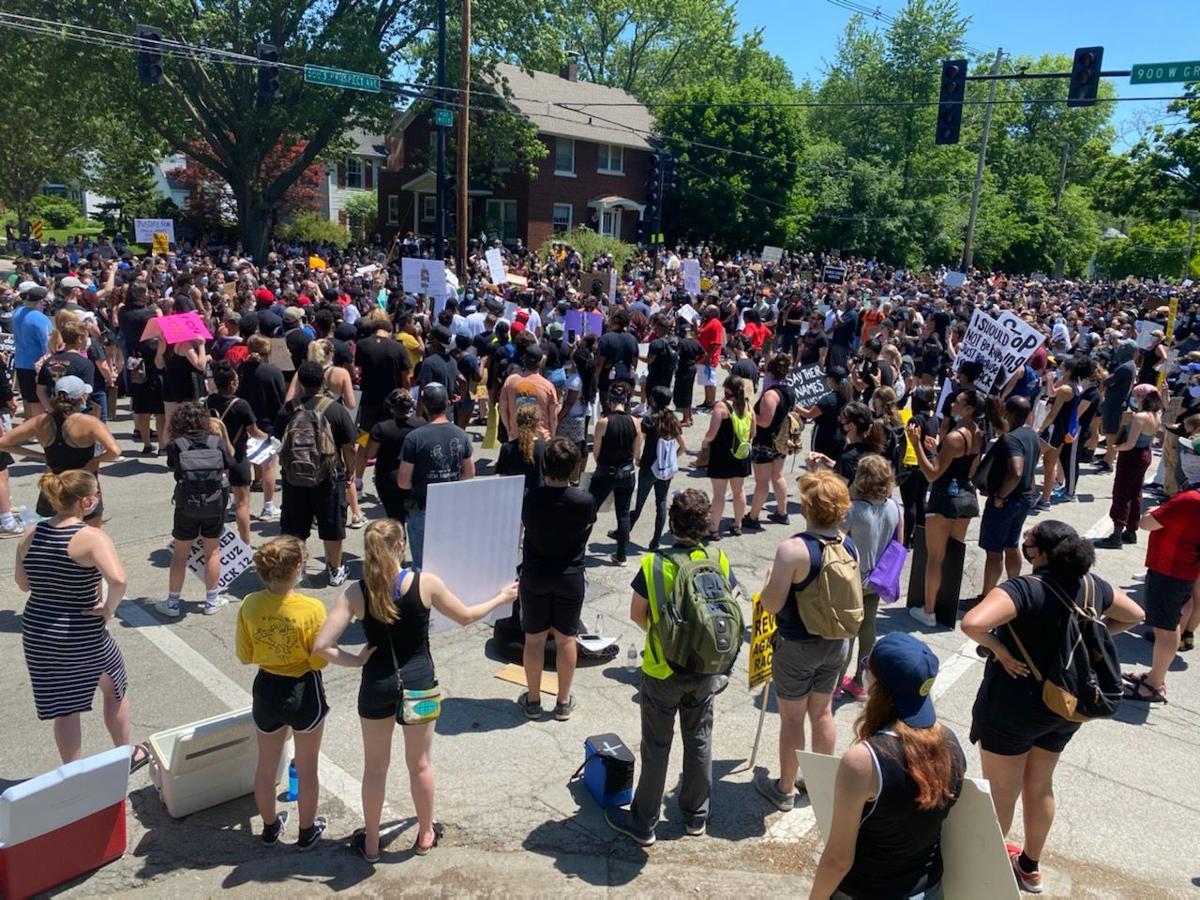 Participants in Saturday’s march through Champaign stop at the corner of Prospect Avenue and John Street to listen to speakers. 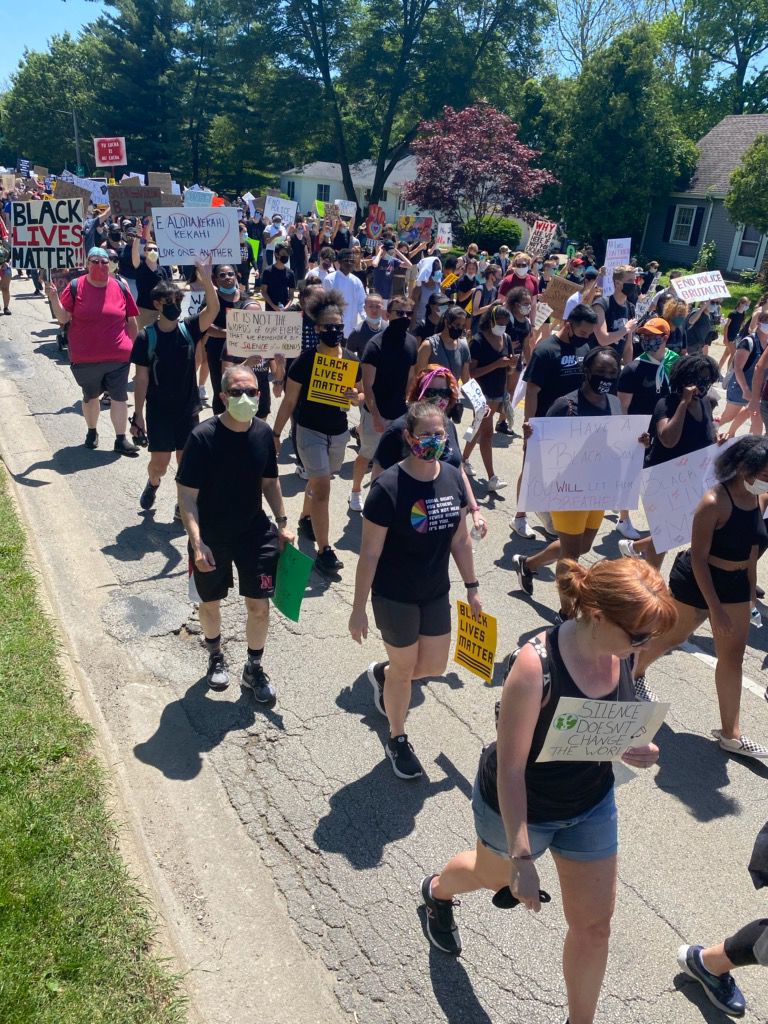 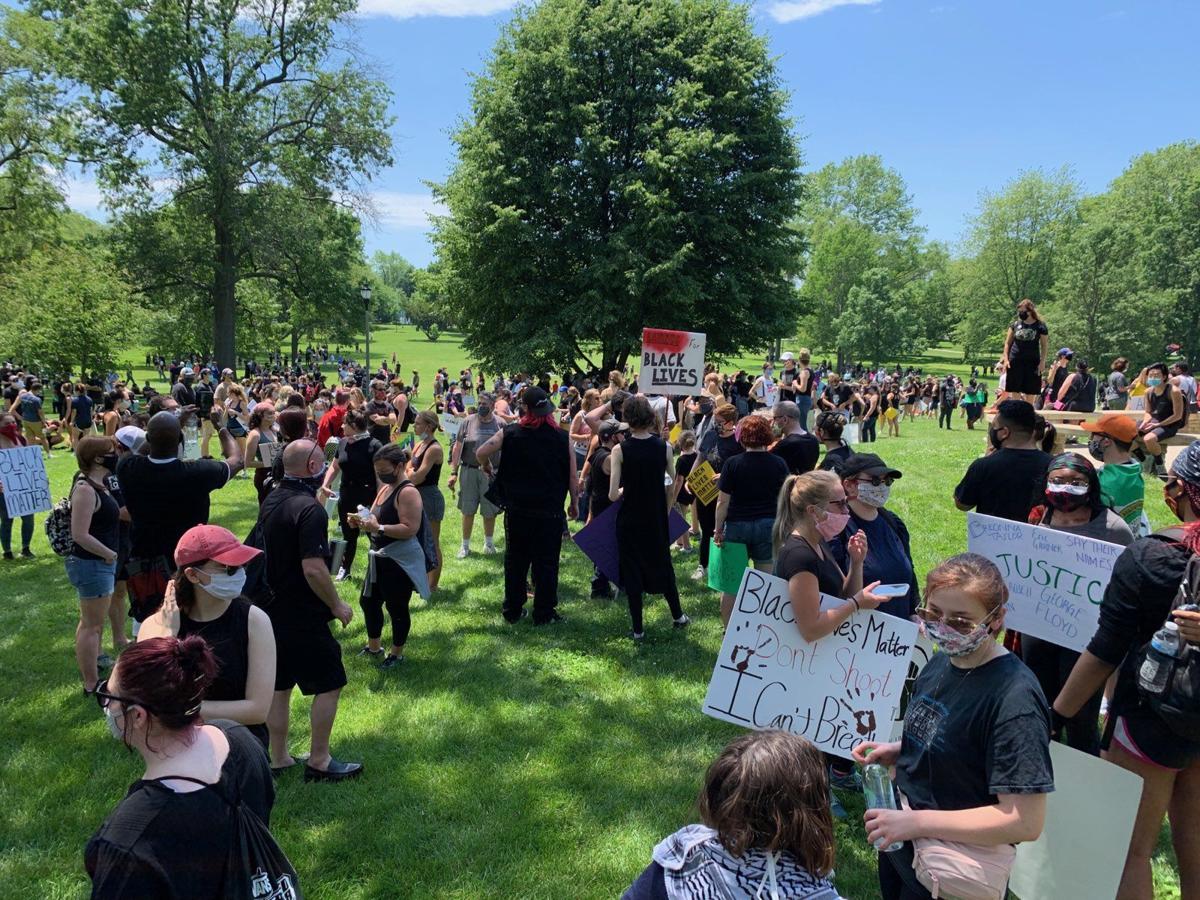 A crowd gathers around noon Saturday, June 6, 2020, at Hessel Park in Champaign before a protest and march against police brutality.

2020 Champaign Central graduate Naomi DuPree leads the march she helped organize Saturday, June 6, 2020, at the intersection of Kirby and Prospect avenues in Champaign.

Protesters gather at the corner of Green Street and Prospect Avenue during a march Saturday, June 6, 2020, throughout Champaign.

The scene at Prospect and Kirby avenues during a march Saturday, June 6, 2020, through Champaign.

Participants in Saturday’s march through Champaign stop at the corner of Prospect Avenue and John Street to listen to speakers.

A crowd gathers around noon Saturday, June 6, 2020, at Hessel Park in Champaign before a protest and march against police brutality.

CHAMPAIGN — After thousands of people marched through Champaign on Saturday afternoon protesting police brutality, one of the 2020 high school graduates who organized the event remarked on the culmination of her first year of social activism.

“It was ridiculous,” said Naomi DuPree, 18, who starts at Parkland College in the fall. “It was amazing and beautiful, and honestly, I couldn’t have dreamed anything better. It was peaceful, and it went exactly the way we planned it.

“I just got out of high school; the rest of the girls are, a majority, in high school. But it’s the youth. We’re passionate. But we put the work in. It wasn’t surprising.”

Thousands of people showed up to Hessel Park and marched through the streets of Champaign.

The event was attended by people of all races and ages. Among the participants were University of Illinois athletic director Josh Whitman and men’s basketball coach Brad Underwood.

The highly organized march centered around the police brutality, including the deaths of George Floyd and Breonna Taylor, and the Urbana Police Department’s arrest of Aleyah Lewis, but it morphed into other issues.

It consisted of nine stops, where speakers would talk into a microphone about different issues facing African Americans, including police brutality, the education system and the news media. DuPree also made sure MTD buses were waiting at the end. She was on the phone with Champaign police Chief Anthony Cobb at each stop.

DuPree has taken part in social activism since last year, when she started social-media accounts under the name “’Paign to Peace” to offer opinions and protest President Donald Trump’s family-separation policy for undocumented immigrants. She built up a following of high-schoolers who wanted to know and do more.

On May 31, she organized a small, spontaneous protest in front of Campus Pantry at First and Green streets bolstered by people she saw buying groceries from the store. As looting went on across town, she wanted to offer a different narrative.

“When they would pull up, I would be like, ‘Come on, come out,’” she said. “You’re already here. Why don’t you sit out here to protest a little bit? There were even people coming to try to loot it, and I was like, ‘No, why would you do that? You want to not be able to come here and buy what you need to buy?’

“Don’t keep following the hype. Be smart about it and make change in the right way.”

At a May 30 protest, she met Justin Hendrix, a local teacher and activist. Two days later, as about 1,000 people peacefully marched from downtown Urbana into Champaign, an organizer recognized her from her social media accounts and pulled her to the front.

So she hatched a plan for a Saturday march through Champaign and put the word out on social media. With Hendrix's help, the event racked up thousands of followers. On Saturday, it came to fruition in a way she didn’t expect a few days ago.

For DuPree and her fellow organizers, activism has been an outlet during a tough couple of months. An All-Area first team soccer player two years ago, she missed her junior year, and her senior season was canceled by the coronavirus pandemic. Then, last weekend, classmate Drew Adams died in a canoe accident, one of several people her age she’s known that have died in the last year.

“We’re striving, we’re drooling for change to happen, because we’re hitting a brick wall,” she said. “People are dying, we’re shooting our friends, our education system is messed up. Something needs to happen. A lot of kids are upset and angry that we don’t know how to change it except for grieve.

“And so now that we can have the resources, with voting and telling people how to make a change, you get those elected officials, you tell your story, you make them hear you and hope that they’re on your side. Sitting around and doing nothing isn’t going to help anything.”

DuPree said organizing with the police was nerve-racking at first, especially for an event partially centered around protesting police brutality. But Cobb made it easy.

“The first thing he said to me at one stop was just, ‘How’s it going?’” she said. “‘Oh, it’s going great? OK, Naomi, I’ll talk to you later.’ He knows that we’re doing the darn thing, and we’re doing it the right way. I think everybody wants to see change, and nobody wants to see the same stories over and over again, and that’s why they showed up and showed out. People just really want to see change in the community.”

DuPree said she hopes to organize more rallies, likely on a smaller scale, that do more to educate people about important issues. She wants to help create clubs in schools where kids can go to discuss those political issues and learn how to act on them themselves. She’s been contacted by Tracy Parsons, who leads the Champaign County Community Coalition, to speak about her activism.

At 18, DuPree now has confidence that she can make change, and she doesn’t plan on stopping any time soon.

“If we don’t see change, we have to keep fighting,” she said. “We can’t stay silent. We can’t be stagnant. There are kids that are growing up that are going to be affected by it one day.

My Turn: Black in America, Part 1

In their own words, nine African American community leaders share first-person stories about what it looks, feels and sounds like to be black in America.