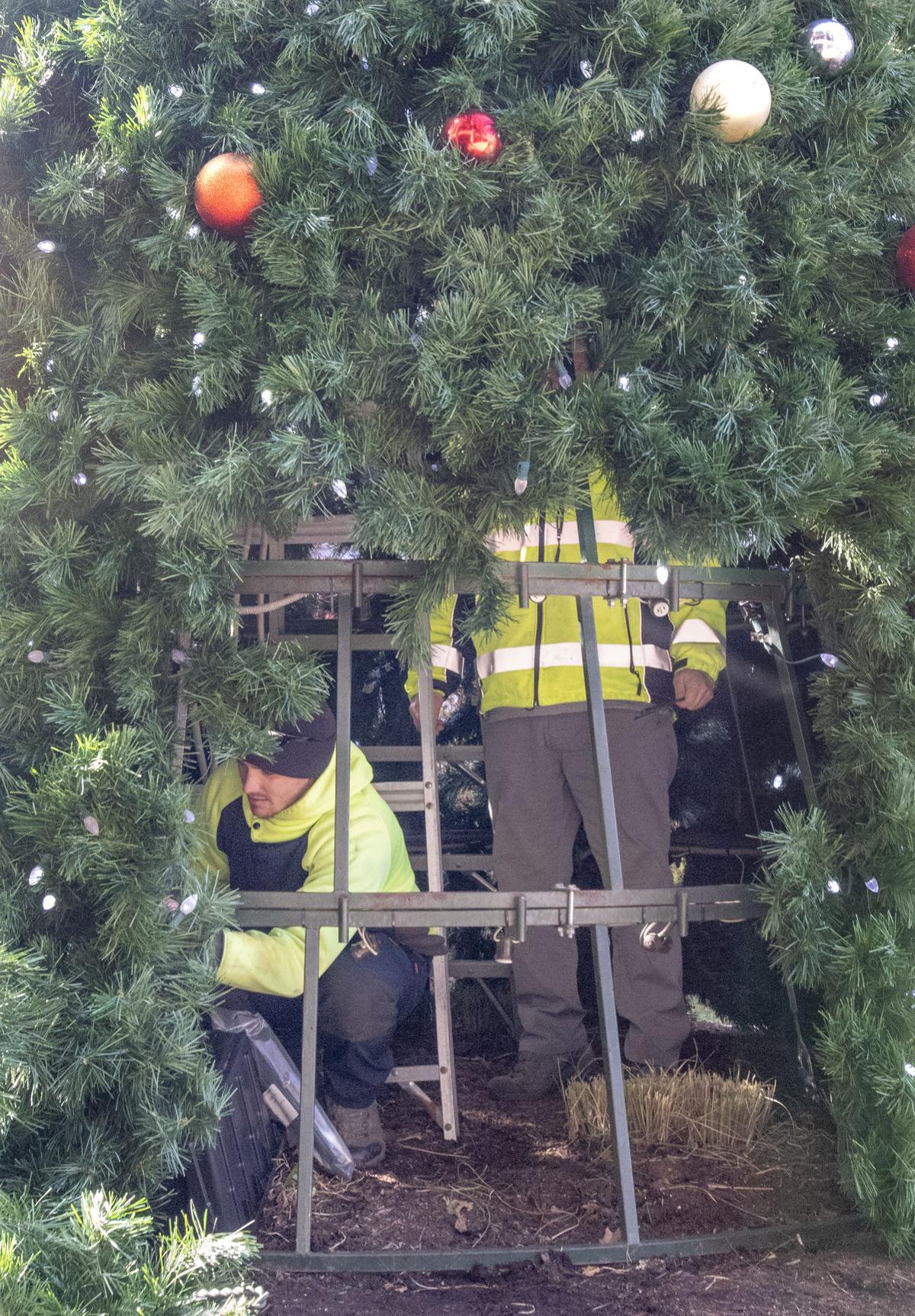 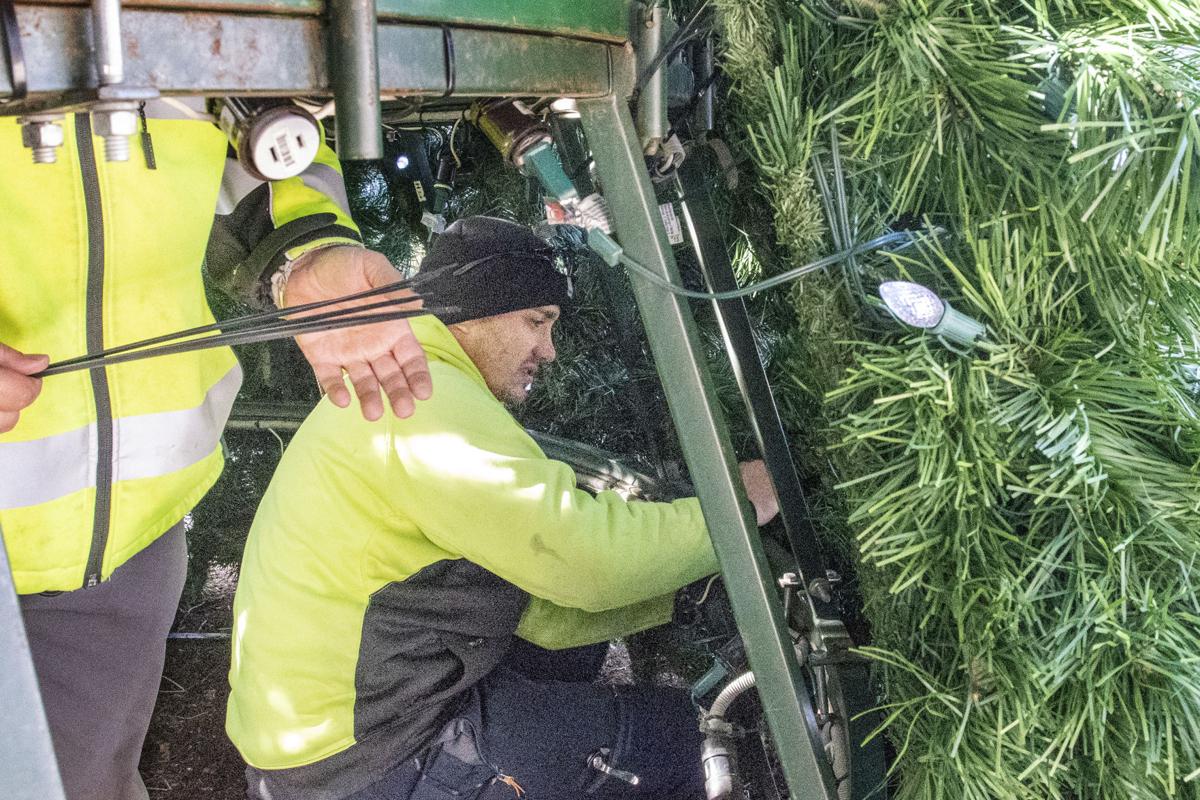 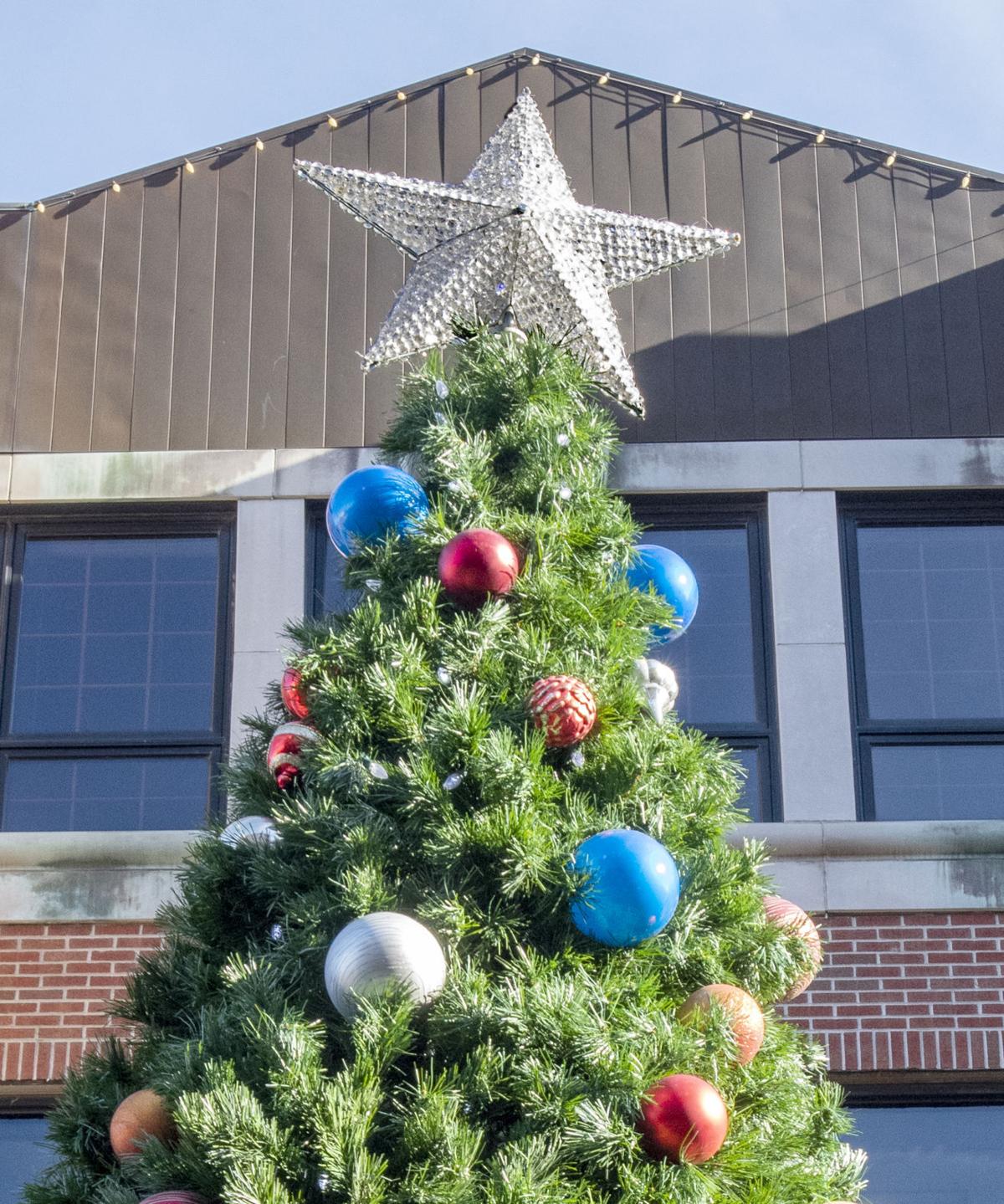 Champaign xmas tree at Neil and Church in Champaign on Tuesday, Nov. 23, 2021. 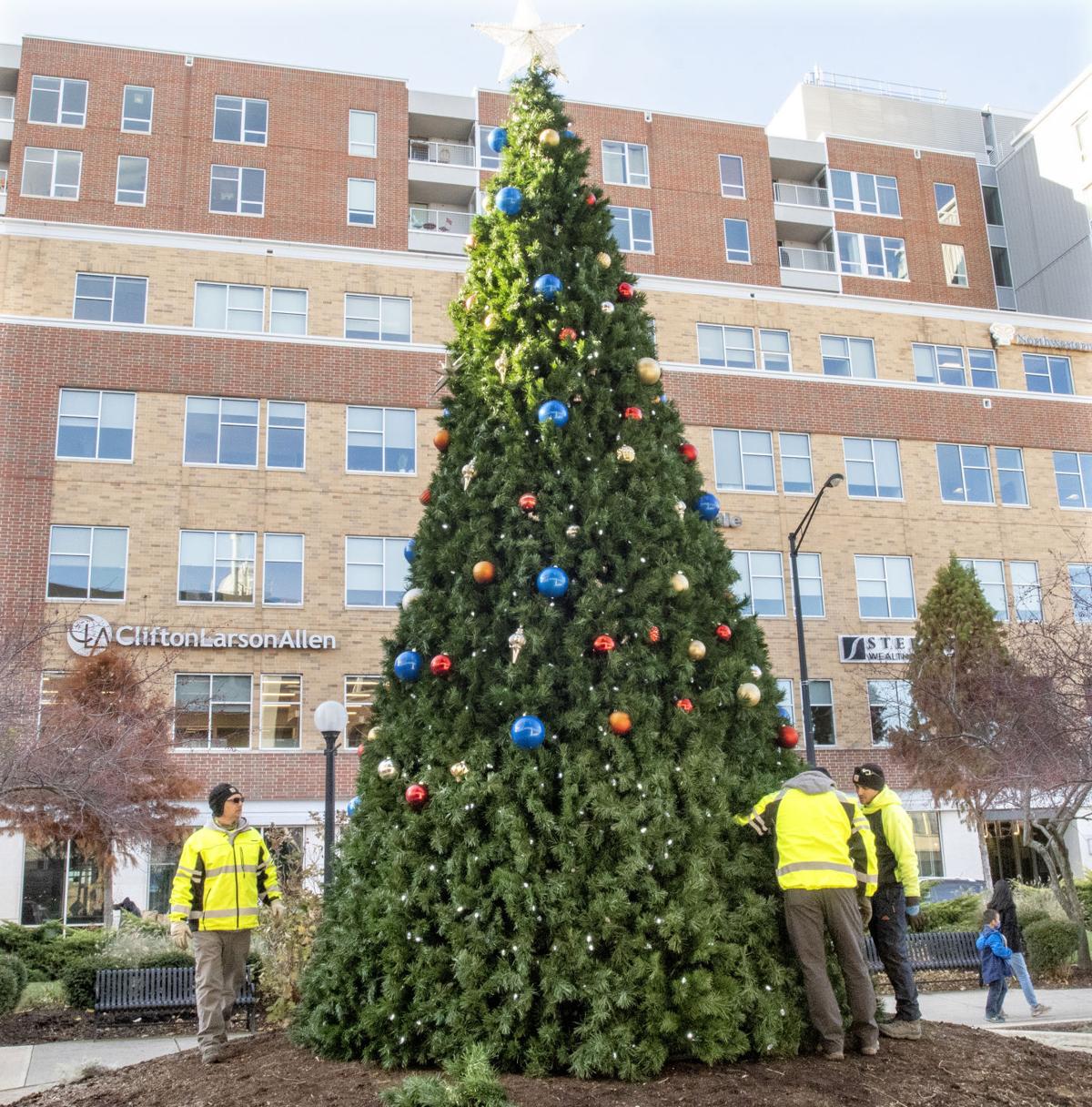 Champaign arborists L-R-John Karduck, Craig Kemper and Zach Woodbury put the finishing touches as they put up the city of Champaign’s christmas tree at Neil and Church in Champaign on Tuesday, Nov. 23, 2021. 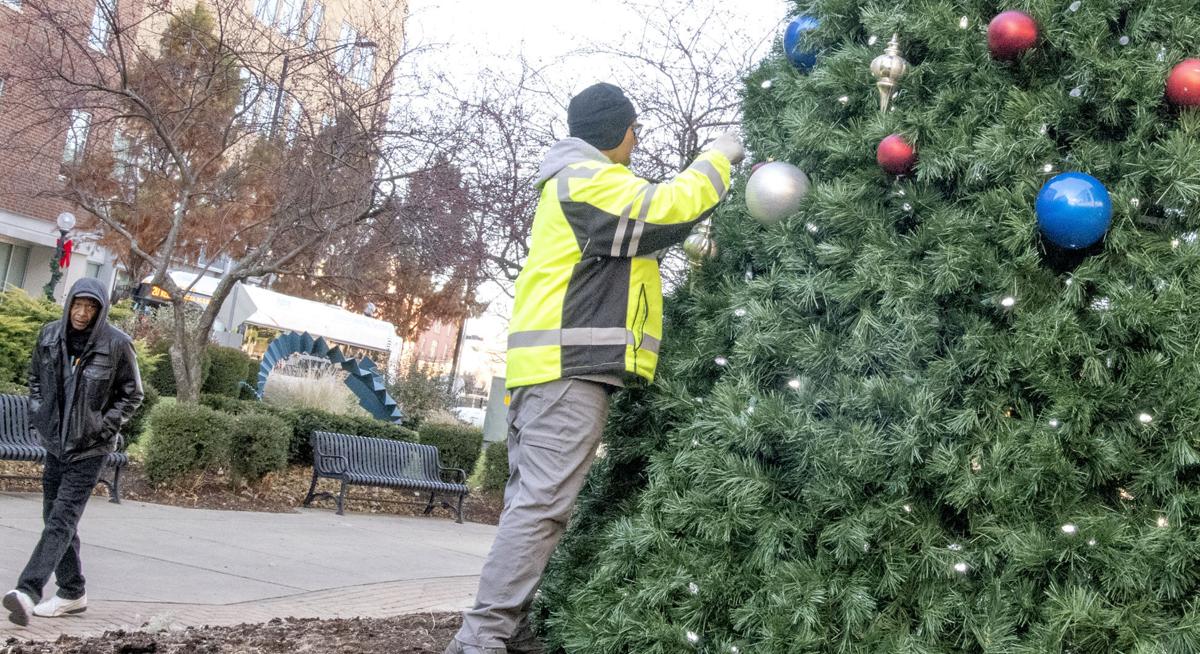 Champaign xmas tree at Neil and Church in Champaign on Tuesday, Nov. 23, 2021.

Champaign arborists L-R-John Karduck, Craig Kemper and Zach Woodbury put the finishing touches as they put up the city of Champaign’s christmas tree at Neil and Church in Champaign on Tuesday, Nov. 23, 2021.

CHAMPAIGN — Elvis is coming out of “retirement” Saturday evening as the Parade of Lights returns to downtown Champaign.

“We’ll be having a blue, blue, blue, blue Christmas,” said Xander Hazel, executive director of Champaign Center for Partnership, which is planning the event that is presented by Christie Clinic.

Keeping with the Elvis theme, downtown will be illuminated in blue as the outdoor parade makes a return after last year’s was called off due to the Grinch known as the coronavirus.

“Some of the float entries have Elvis incorporated in them,” Hazel said. “There is a judging component for businesses and organizations that want their float to be judged.”

He said Elvis might also make a special appearance before the parade.

In lieu of an outdoor parade, a virtual shoebox parade was held last year.

“We had businesses construct miniature floats, and we put it on YouTube, which premiered at 6 p.m. the Saturday after Thanksgiving,” Hazel said.

About 40 floats were entered, and Hazel said there have been about 5,500 online views of the parade.

Organizers wanted to make the shoebox parade a tradition but weren’t as successful, as only two businesses created the mini entries this year. They are on display at their sponsors — Jane Addams Book Shop and Live Action Games.

But the real thing will return as 40 floats are signed up. That’s down from a previously normal year but not unexpected, Hazel said.

“For a lot of our businesses that (enter) floats, they’ve had some challenges with putting a float together due to the pandemic,” Hazel said. “We’re in a transition era.”

He said the “40-some floats will still make this event pretty spectacular.”

Besides floats, there will be larger vehicles such as a Champaign fire truck, the Rantoul Township High School marching band, classic cars and new vehicles.

Hazel said people are in the mood to celebrate the Christmas holiday.

“This event surprises me,” said Hazel, who is in his fourth year helping with the parade. “It always strikes me how many people come to this.”

This marks the parade’s 21st year, and for many it’s a tradition. Some parents came to the parade as children and are now bringing their children.

“It’s a way to celebrate all the great small, local businesses in Champaign,” he said. “We hope people continue to shop local this holiday season.”

Tickets are on sale for VIP viewing at Farren’s and Neil Street Blues, which will provide uninterrupted viewing of the parade as well as food and beverages.

The parade steps off at 6 p.m. Beginning three hours before, there will be several pre-parade events.

New this year is a candy crawl. Instead of candy thrown from floats, the public is invited to “crawl” to a number of businesses around downtown to collect treats and sweets.

Organizers planned the event with public health recommendations and requirements in mind. All participants and spectators are asked to comply with current public health guidelines.

As a result, the lighting of the tree of lights after the parade is canceled to keep crowd densities down, and candy distributed during the parade will be off limits. Float entries are welcome to donate candy to the candy crawl instead.

What: Downtown Champaign Parade of Lights

Who: Presented by Christie Clinic and organized by Champaign Center Partnership

Also: Preceded from 3-6 p.m. by pre-parade events, including horse and carriage rides, visit with Santa and candy crawl at downtown businesses.