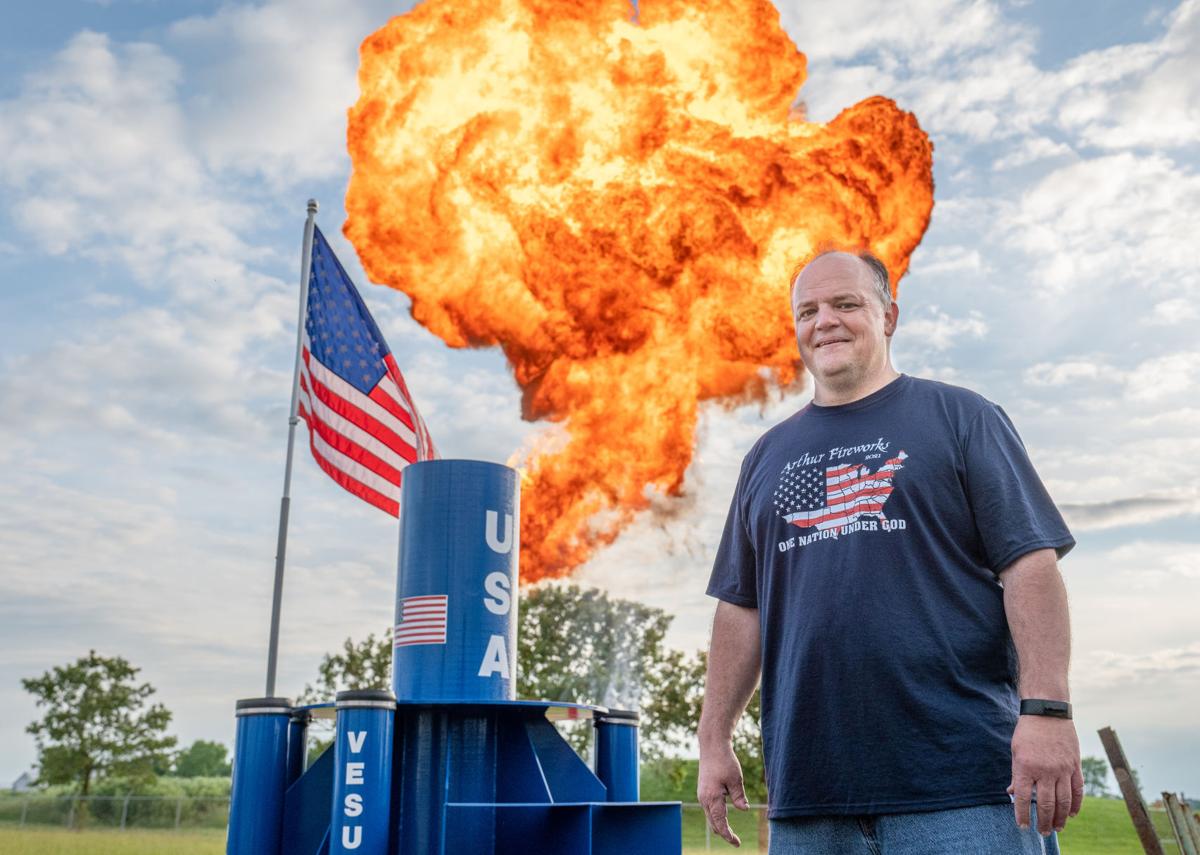 Larry Schlabach stands in front of a fireball, one of the pyrotechnic displays he’s perfected over the years for Arthur’s massive annual fireworks display. Next to him is his largest fireball cannon, which he named ‘Vesuvius’ after the Italian volcano. 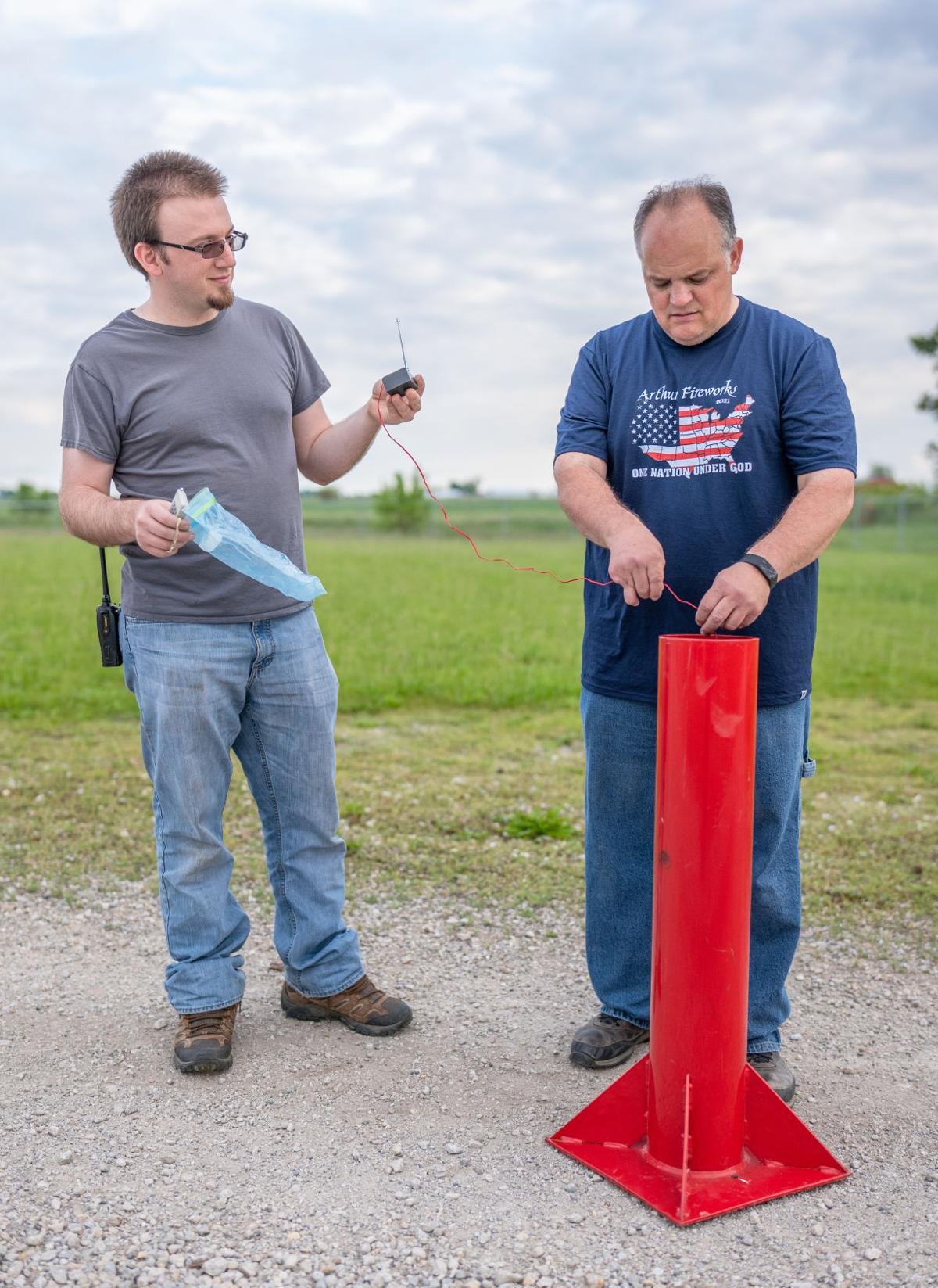 The 500-foot Wall of Fire explodes at the Arthur Freedom Celebration in 2017. 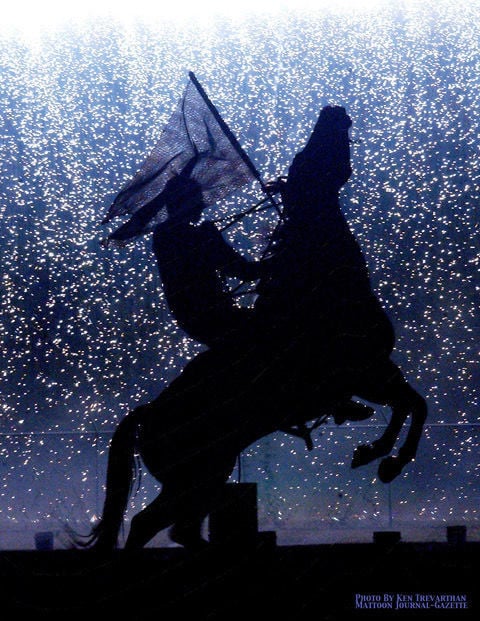 Larry Schlabach stands in front of a fireball, one of the pyrotechnic displays he’s perfected over the years for Arthur’s massive annual fireworks display. Next to him is his largest fireball cannon, which he named ‘Vesuvius’ after the Italian volcano.

The 500-foot Wall of Fire explodes at the Arthur Freedom Celebration in 2017.

ARTHUR — Just talking about it, Larry Schlabach felt knots in his stomach.

For the past 20 years, he’s improved and perfected the 3-minute, 20-second awe-inspiring pyrotechnic display he puts on in the middle of Arthur’s massive 20-minute fireworks show. Tens of thousands of people come to the town of 2,500 to take in his work. He’s put in thousands of hours crafting the fireballs and “Niagara Falls” fireworks that make up the display. Experience, though, doesn’t keep his insides from turning as he describes the lead to the show.

If all goes to plan, this year’s show will be more breathtaking than ever.

As usual, spectators will see and feel a 500-foot “Wall of Fire” and the “Niagara Falls” fireworks will rain down, illuminate Jurgens Park as if it were midday as The Rural Patriot rides by on his horse. But this year, Schlaback and a group of friends and family, called “The Niagara Falls Fellows,” created what he calls a “Gatling Line” of fireballs, which fire off in succession, one after the other.

“People that go every year will be very excited,” he said. “It’s going to be really cool.”

Along with the rest of the impressive show, Schlabach’s slice of the Arthur Freedom Celebration has become known far and wide. In 2016, his story was featured on the front page of The Chicago Tribune, along with a photo of him and “Vesuvius,” the massive fireball cannon he designed.

Bringing national renown to his hometown, though, with a massive display of showmanship, was never part of the plan.

Growing up Amish, the horse-and-buggy rides into Arthur from his family’s farm 5 miles outside of town were an event, even though they’d never so much as stop at a restaurant for lunch. Instead, the bologna-and-cheese sandwiches they’d make after a run to the town’s IGA were a special treat for the ride home.

On summer days, he and his five siblings had constant fun. They’d always be occupied with some outdoor activity, whether racing their family’s buggy around sharp turns, seeing how fast they could go without tipping it, or making mazes out of hay in one of the barns.

When they were in their 20s, Schlabach and brother Gary would grab his guitar and hide it in his bike cart — church rules warned against playing instruments — and escape to their family’s getaway cabin.

Pyrotechnics didn’t come into play until 2001, when Arthur Fireworks Commissioner Mark Jones, who had taken over the annual fireworks show since 1993, asked Schlabach and his siblings if they’d like to help out. Immediately, he and the group hatched an idea to add Niagara Falls fireworks to the show.

Of course, the show has evolved since then. The first year, they hung rows of the fireworks from saplings they’d cut down from the nearby woods. The fireworks, which were placed on a hill, were so wonky that today, they jokingly refer to them as “The Dr. Seuss Niagara Falls.”

The next year, they hung them in one 500-foot line in front of a row of trees at Jurgens Park. Because the lights so brightly illuminated the park, they added a new twist to the mix.

“My cousin said, ‘We can’t let these lights go to waste,” he said. “We’ve got to do something with them. And he turned to his brother and said, ‘Why don’t you ride your horse out in front of them while we do the Niagara Falls.’ And we just all looked at each other and were like, ‘That’s amazing.’ We knew that idea would be really cool.”

Thus, The Rural Patriot was born. Every year, Schlabach’s cousin, horse trainer Marty Miller, rides out in front of the fireworks, American flag in hand, silhouetted by the bright lights behind him.

In 2003, at the home of a fireworks dealer, Schlabach was shown a homemade fireball made with a mix of coffee creamer and gunpowder. He was transfixed.

When he got home, he and his siblings did their best to replicate the fireball he’d seen using 5-gallon buckets. After blowing a few buckets to pieces, they finally found the right mix that would pop the mixture into the air, then cause it to explode, pluming into the sky like a mushroom cloud.

In the weeks before that year’s show, the group was given $600 to buy enough coffee creamer to fill a 500-foot row of buckets and barrels. They cleared out Sam’s Club.

“The woman at the register said, ‘Having a coffee klatch?’” Jones said. “And he said, ‘No, Ma’am. Fireballs.’ And she just turned away.”

Back then, Schlabach admits, they hadn’t perfected their show. For instance, they left the creamer mixture in open buckets outside. Had it rained the night of the show, like it did in surrounding areas, the creamer would have become wet and sticky and wouldn’t have ignited. But Arthur stayed dry.

“I just feel like God, he likes fireballs,” Schlabach said. “If it had rained, we would’ve been digging that stuff out of barrels and we would’ve never convinced anybody that we should do it again.”

The crowd did, too.

When Schlabach pushed the button to ignite, the wall of fire exploded hundreds of feet in the air, far higher than any of the fireballs he’d shot previously. As the smoke plumed, the heat radiated, and the closest members of the audience were sprayed with a mist of sticky coffee creamer.

“I was in shock,” Schlabach said. “I think they fed off of each other and it just exceeded everybody’s expectations. We couldn’t believe it when we shot it. The people were so excited by it, and that’s something none of us really expected. People can’t get enough of fireballs.”

That same year, for reasons that extended beyond the fireworks show, he and three of his siblings decided to leave the church. Eventually, the whole family left on good terms. Schlabach says the Amish lifestyle can be a wonderful one for people who buy in wholeheartedly, but that simply wasn’t the case for him and his family.

Life changed after that, and so did the show. He bought his first car, the Toyota Prius he drives today, and a few months later, his first cellphone. A few years later, he learned to play the fiddle, and he, three of his siblings and a few other musicians formed a bluegrass band. They regularly play shows to this day.

All the while, his time spent on crafting the pyrotechnic show increased. He began adding individual fireballs to lead off the show. A local business, Tri-County Welding, helped them craft cannons specifically made for this purpose, including Vesuvius. Each year, he’s tried to make the show more efficient. He’s switched from coffee creamer to a special, extra-fine sawdust given to him by a local wood shop, which completely burns in the air before it gets to the crowd, and he uses gasoline with some of his cannons.

The show, he’s certain, is the world’s largest fireball display. While the thought of taking his show on the road has crossed his mind, the Niagara Falls Fellows aren’t paid for the Arthur Freedom Celebration, and Schlabach wouldn’t have it any other way.

“I felt like it was a show for all of my friends, but someone else was paying for it,” he said. “Nobody ever got paid to do this, and that makes it more fun.”

The show isn’t simply a visual display. It’s an auditory and sensory work of art. Spectators hear the loud booms of explosions and feel the heat on their skin before the silent Niagara Falls fireworks come raining down as the Rural Patriot rides, silhouetted by the light. Just as the show calms down, the normal fireworks pick back up, more numerous than before.

“It’s like a rock concert,” Jones said. “You can see video, but to be there live, it’s a physical and emotional feeling that only comes from being there and experiencing this yourself.”

Schlabach misses certain things about the Amish life. He and his brothers used to talk for hours as they rode around the countryside in the buggy, playing old country music on a radio they’d snuck inside.

Now, they’re more independent, which has plenty of perks. But it also means he, his siblings, his cousins and his old friends don’t spend as much time together as they used to.

Each year, though, they get together to craft their section of the fireworks show. That’s what made last year’s cancellation so difficult and this year’s show so special.

“It was like skipping a year of a reunion that you look forward to, and you’ve got to wait a whole year,” he said. “A lot of us live around here, and we see each other, but just to get tighter and do this, we really missed that last year. It just didn’t seem right.”

After some initial reservations, the Amish community, he says, has taken to the fireworks show.

While the Amish won’t join the hoards of people who crowd Jurgens Park each year, Jones said every year, he’ll see people in the cornfields, watching from a distance, taking care not to be seen.

For Schlabach, watching children enjoy the fireworks evokes memories of his childhood, when he and his family would make the trek into town each year for the Arthur Cheese Festival, where he’d ride rides and buy food and throw balls at a target in a dunk tank.

“Hopefully, I’m helping some kid in Arthur get excited like I did for the cheese festival,” Schlabach said. “Because someone did that for me. It’s like our own little Disney World right here. It’s a small scale, but it’s that type of entertainment. It’s something you can’t see anywhere else.”

The Arthur Freedom Celebration fireworks show, complete with the 'Wall of Fire' and the 'Rural Patriot' riding in front of 'Niagara Falls' fireworks, is set to start about 9:30 p.m. Saturday at Jurgens Park on Illinois 133 at the Douglas-Moultrie county line.