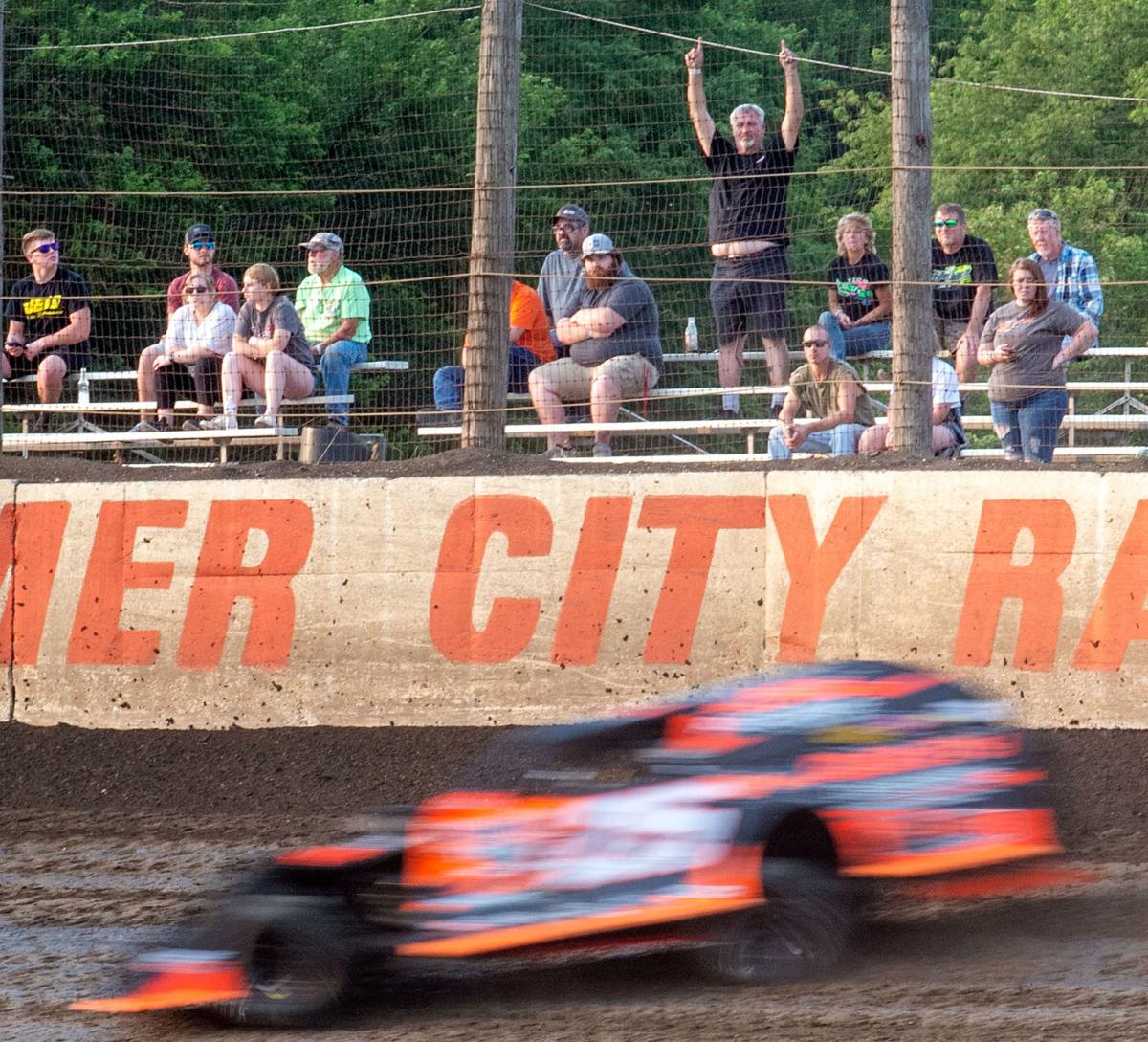 A fan cheers from a side bleachers during qualifying at the Farmer City Raceway on Friday, July 2, 2021. 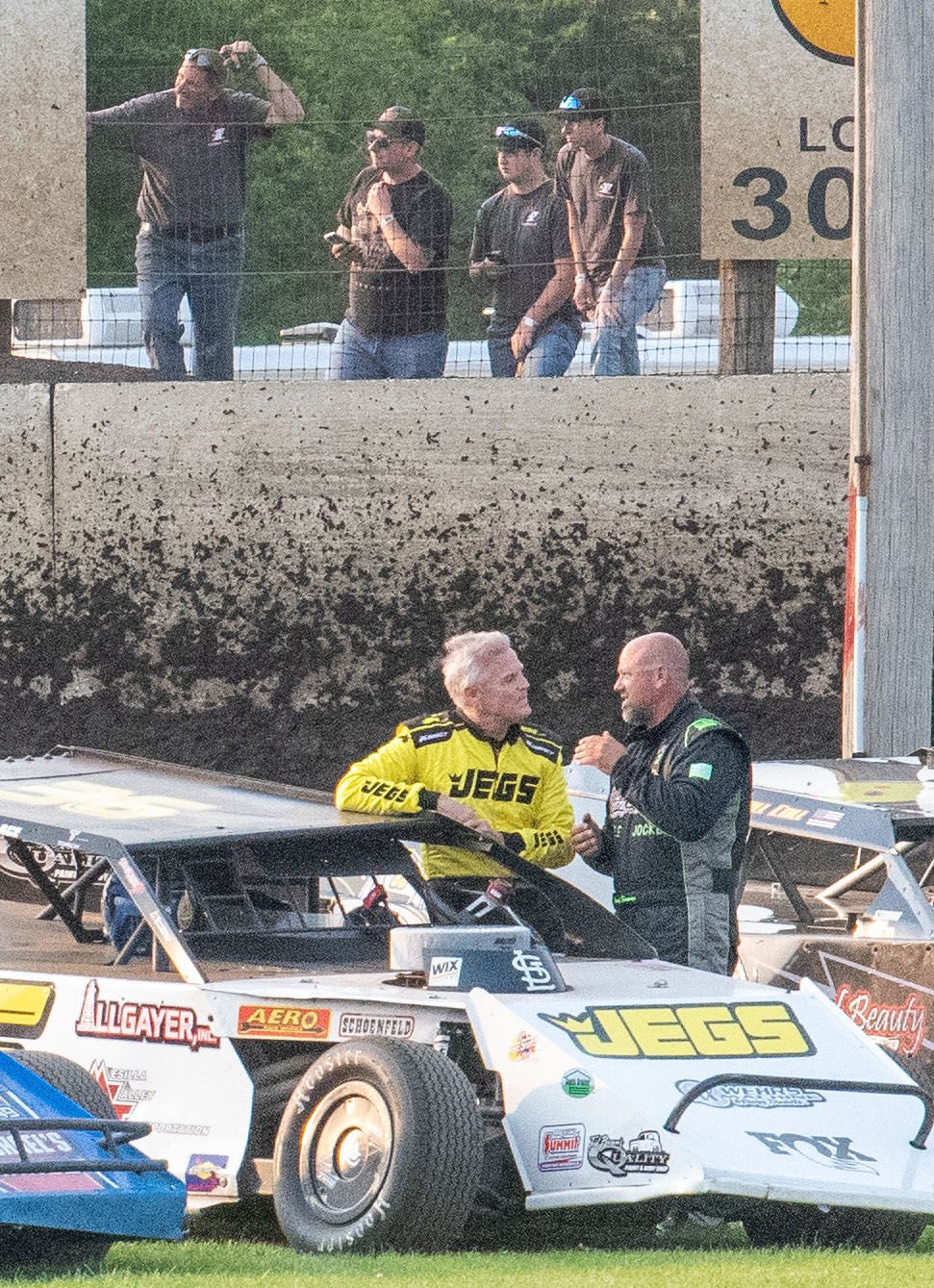 Drivers chat in the middle of the track by their cars after running for qualifying at the Farmer City Raceway on Friday, July 2, 2021.

Qualifying at the Farmer City Raceway on Friday, July 2, 2021. 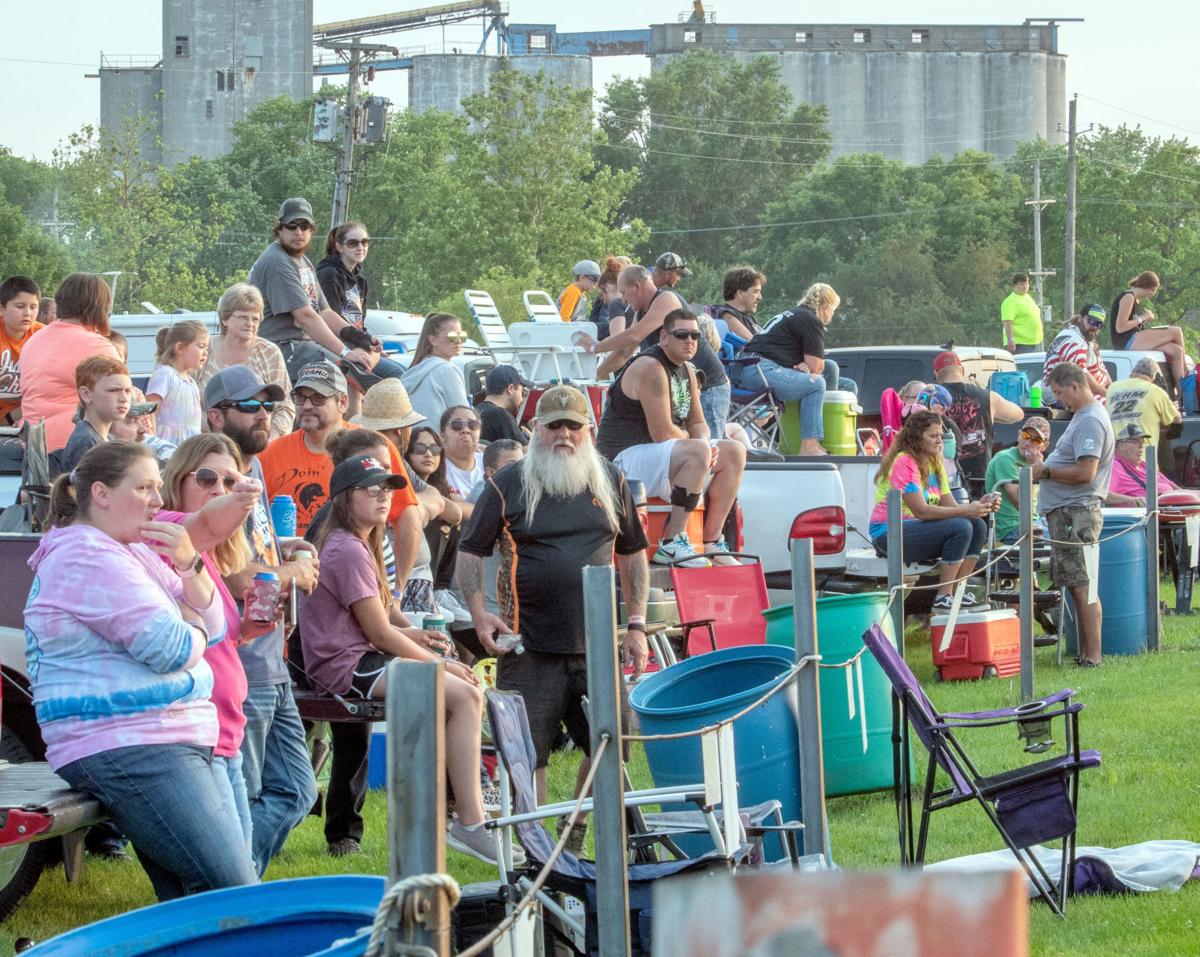 A Friday night at Farmer City elevator in the background, fans watch on turn two from their vehicles during qualifying at the Farmer City Raceway on Friday, July 2, 2021. 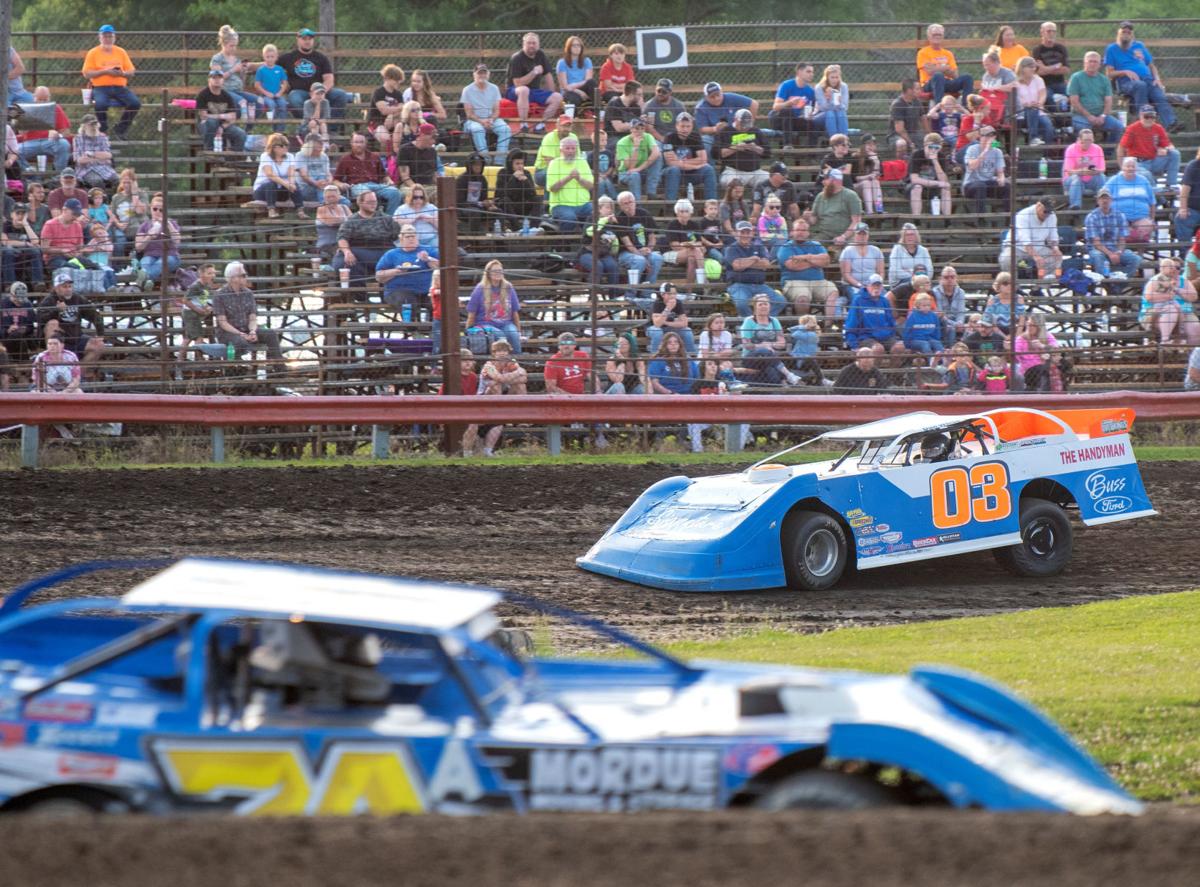 Fans watch from the bleachers as cars attempt to qualify two at a time at the Farmer City Raceway on Friday, July 2, 2021. 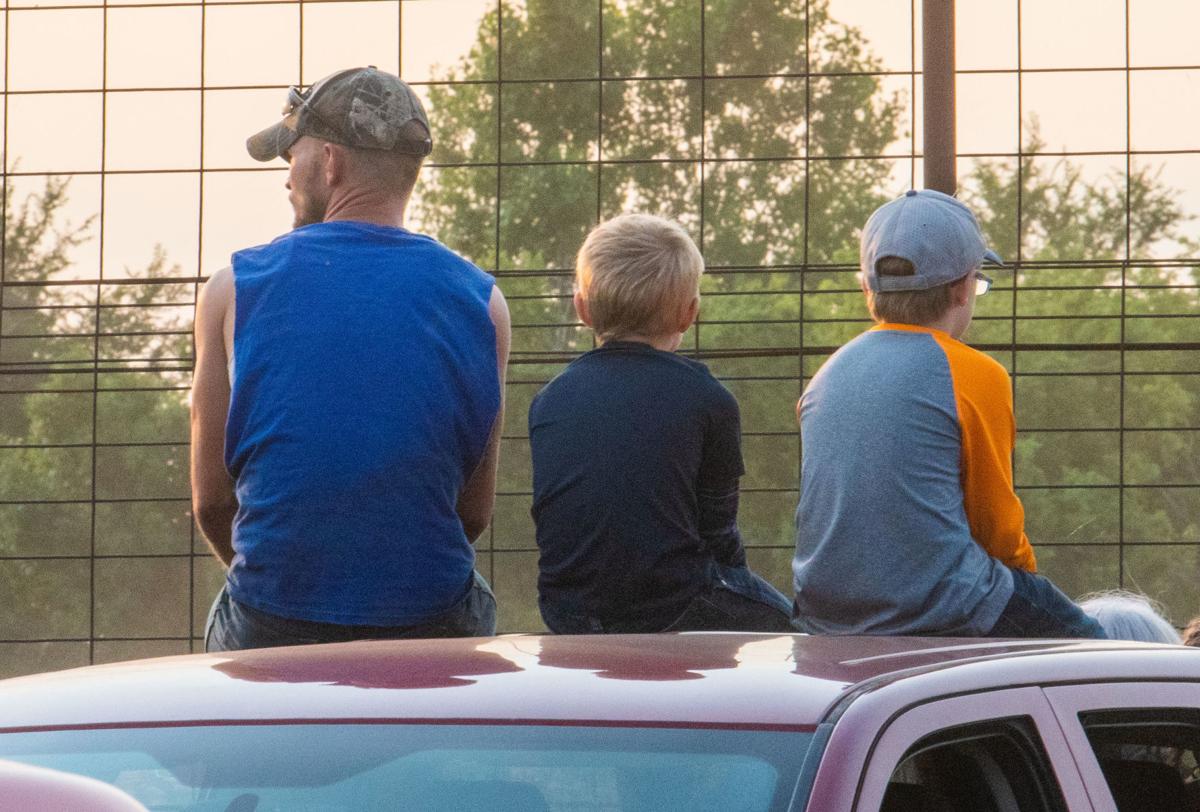 Be it from the roof of a truck (top) or the bleachers (above), fans of all ages enjoyed their view of the action Friday night at Farmer City Raceway.

A fan cheers from a side bleachers during qualifying at the Farmer City Raceway on Friday, July 2, 2021.

Drivers chat in the middle of the track by their cars after running for qualifying at the Farmer City Raceway on Friday, July 2, 2021.

Qualifying at the Farmer City Raceway on Friday, July 2, 2021.

A Friday night at Farmer City elevator in the background, fans watch on turn two from their vehicles during qualifying at the Farmer City Raceway on Friday, July 2, 2021.

Fans watch from the bleachers as cars attempt to qualify two at a time at the Farmer City Raceway on Friday, July 2, 2021.

Be it from the roof of a truck (top) or the bleachers (above), fans of all ages enjoyed their view of the action Friday night at Farmer City Raceway.

Kenny Wallace is here, a surprise to many in the crowd of 1,400. The NASCAR veteran, who as recently as a decade ago was spending his Friday nights in Daytona Beach, Fla., and Talladega, Ala., decided to make a pit stop in DeWitt County after a weekend of racing in Alaska.

Farmer City’s quarter-mile oval, the setting for Friday’s big Dirtcar Summer Nationals, is “a very reputable track,” Wallace says, and not far from his Missouri home.

“With one of the biggest races of the year coming up, I thought we would come here and see how we’re running,” he said.

Jon Easley is here, arriving close to 20 minutes before the pits open at 4 p.m. The Benton native is eager to get going — it’s Year 10 behind the wheel for him, but his first in a decade. After coming up in the sport, he put his racing on hold while serving nine years in the Army.

“If it wasn’t for this, I’d probably go back,” Easley says, noting how much the sport has evolved since he last competed. “It’s a huge swing compared to what I did before. It was completely different, older cars and it was a little cheaper because I was young and I wasn’t paying for it. There’s a lot to learn.”

Nat Farnsworth is here — and having the time of his life. Now 84, he got into the sport through his company, which sponsored driver Mark While.

“I’m just grateful I can help,” Farnsworth says. “I wish I would have gotten into this sooner.”

Dan White’s 16-year racing career has largely kept him close to his native Elgin — he calls Sycamore Speedway in Maple Park his home track. Because Farmer City was one of the only tracks in the state to hold races during Independence Day weekend, the trip south seemed worth it.

“I’ve always wanted to come out here and I finally had the chance,” White says. “I know there’s no walls and it looks smaller than what I thought, but definitely high-banked and fast. It’s going to be a tough one, but it’ll be a good night.”

Meanwhile, track promoter Lance Spieker is working hard to prepare everything for the fans. It’s still a few hours before races get underway, with the diehards starting to trickle in, and a week of heavy rain has thrown the track’s routine into disarray.

What the track’s staff would have liked to finish days in advance must now be done with hours to spare.

The buzz in the pit area builds over the next hour. Around 5:30, two of Peoria Speedway’s regulars enter the gate. Jason Wagner arrives with his late model in tow, and the hauler of 17-year-old modified phenom Degan Dozard pulls into the next spot minutes later.

Their cars roll out within eyesight of Kevin Weaver’s spot. The Gibson City native and track champion many times over is toiling away on his late model.

Farmer City (pop. 1,941) is “a small town and a small community,” Weaver says. “I’ve been a race car driver since I was 18 and I’ve been coming here since. It’s pretty much stayed the same. They’ve done some improvements, but overall, it’s a nice place to come to.”

Before his attention turns to racing, Wagner swings by the concession hut behind the Turn 3 wall for a ribeye sandwich.

He says the track’s delicacy is worth every penny of the $8 price. It’s a refrain that will ring throughout the night.

Behind the grandstands, it may as well be a county fair as the drivers prepare for the start of hot laps.

A stand selling shirts and flags has drawn a good-sized crowd. Multiple food vendors are enjoying lines that will only grow longer as the night deepens. The beer tent, which resembles a small restaurant, is already busy.

Rhoads Racing Promotions has tonight’s most interactive attraction. It’s offering a prize to the person who turns the fastest lap at a virtual recreation in the “rFactor” video game of Peoria’s 3/8-mile bullring that many Farmer City regulars know well.

The simulator has two sets of wheels and pedals, allowing two fans to use the rig at the same time. An eager contingent of younger race fans are waiting to lay down some virtual rubber. While they wait in line, modified die-cast models and coloring books lay for sale on the table.

“The staff has been fantastic to me,” says Christopher Rhoads, his attention focused on the growing line. “I’ve been at this for about eight years. … I have a regular base of customers that I see every week.”

A few yards from Rhoads, Old Tyme Ice Cream is drumming up a line with the advertisement of tonight’s special flavor: butter pecan. Longtime race fan Sarah Reynolds stops by for cones with her husband and son before the racing begins in earnest.

Reynolds’ son, 11-year-old Drake Perry, won’t want to miss a second of the action once the cars hit the track.

“My son has the racing blood,” Reynolds says. “It’s through and through; he’s wanted to race for as long as I can remember. I hope one day he’ll get his opportunity and he’ll follow in the footsteps of tradition.”

Drake says his favorite thing about the track is the smell of racing fuel and rubber.

“What makes this track unique is just how it races when it comes to feature time,” he says. “I want to race.”

Part of the allure of a night at the Raceway is the affordability for families. The July 2 crowd is anticipated to be one of the largest of the season for the track, which averages around 1,200 fans.

It’s fan appreciation night, after all, with a $5 ticket including a fireworks show and an on-track meet-and-greet with the drivers during intermission.

“The track does a lot of things for its fans to come in,” Reynolds says. “I totally support this track, not only because it’s my childhood track but because there’s so much for kids to do and for families to do. It brings families together, and that’s what we need in this generation.”

Hot laps, qualifying and heat races begin and end without a hitch. Wallace and Weaver win their respective heats — Wallace will start the modified feature on the pole, while Weaver will start the late-model feature in second.

With only tonight’s four features left to run, it’s almost dark enough for fireworks. First, however, almost the entire pit area rolls out onto the track for the meet-and-greet.

The annual event puts cars and teams from all four of tonight’s classes on the front stretch, with fans flooding the rubber-packed dirt as soon as the gate allows them.

“It’s just giving back to the fans. I love it,” says Cassandra Buss, a LeRoy native who grew up coming to races at Farmer City with her father.

She’s brought her kids onto the track to share the same experiences she enjoyed as a kid.

Despite a broken drive shaft ending the night early for Donny Walden’s racing team, crew member John Goergen is on the track hanging out with the fans.

“To me, dirt late-model racing is some of the best racing there is, even NASCAR,” Goergen says. “When these guys are going door handle to door handle, there’s just no other racing in my eyes. There’s nothing that’s better than this.”

Down the front stretch, few drivers have a better sense of what the track represents than modified driver Butch Carnaghi. He’s been racing at Farmer City on-and-off since 1972.

When he has the chance to give back to the fans on a night like this, he doesn’t take it for granted.

“It makes the hours that you spend on these things much more enjoyable,” Carnaghi says. “I like this racetrack, the way it’s arranged and taken care of. It’s usually not too rough.”

Some fans depart after the fireworks show, but most stay for the start of the title cards. Owing to a lengthy red flag brought on by a three-car pile up, the street stock feature takes around 45 minutes to complete.

Fans who stayed the entire time got their money’s worth, with Fairbury’s McKay Wenger staving off a hard-charging Weaver to win the late-model feature and Peoria’s Allen Weiser finishing first in the modified class.

Back in his office, Spieker and a few others are finally able to relax after a busy night.

“It’s always relieving to get long nights like these over with,” Spieker says. “There was a lot of anticipation getting ready for this race. Always eventful, you never know what’s going to happen, but all in all a good night.”

Short-track racing isn’t so much about the money or the fame, and that’s reflected in Farmer City’s dedicated staff — 95 percent of whom volunteer their Friday nights to be part of the show, Spieker says.

“We’ve put in a whole lot of time to do what we love because we know people love coming here.”

What: Back the Badge Fest, a family-friendly event honoring law enforcement put on by Back the Blue Champaign County.

When: Aug. 14, with gates opening at noon and music starting at 1 p.m.

Tickets: $20 general admission, $30 VIP, free for current and retired officers, with a portion of the proceeds going to local community outreach.