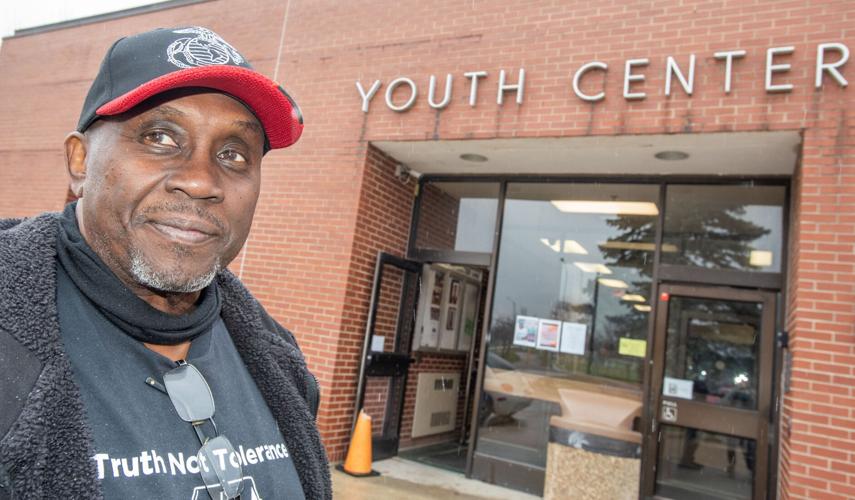 Quenton Hillsman is spearheading an effort to hold a free Thanksgiving meal for the public next Wednesday, Nov. 23, at the youth center in Rantoul. He was there on Tuesday, Nov. 15, 2022.

Quenton Hillsman is spearheading an effort to hold a free Thanksgiving meal for the public next Wednesday, Nov. 23, at the youth center in Rantoul. He was there on Tuesday, Nov. 15, 2022.

The Rantoul-based pastor is heading an effort to serve free turkey dinners with all the trimmings Wednesday, Nov. 23, the day before Thanksgiving.

The four-hour event begins at noon at Rantoul Youth Center. It is the second year of the free dinners.

The meals are available to all Champaign County area residents. Last year, Hillsman, a Champaign native and Centennial High School graduate, and his crew served nearly 100 people. This time around, he expects to serve more as word gets around.

“Last year a person asked me, ‘Could you use 15 turkeys and all the fixins?’” Hillsman said. “I just saw how God started to open the doors.

“I used to drive for 7 Up, and when I asked, they donated the soda. Brother Hub (Burnett) donated the desserts. And everything came together.”

Hillsman said “several testimonies” came out of the event. One involved a man who had a severe spinal injury. Praying followed, resulting in his claim of healing.

“He said, ‘I no longer take medicine, and I believe in Jesus,’” Hillsman said.

Burnett, of Rantoul, pastor of Champaign’s New Free Will Baptist, called Hillsman “a server,” as in someone who wants to help others.

“He has a heart for people and especially in Rantoul,” Burnett said. “I think in the years to come ... he’s going to do a lot of serving to (the) community.

“It’s just going to get better and bigger,” he said of the free meals. “There are a lot of people who were very, very needy last year. A lot of people wouldn’t have ate” if it weren’t for the event. “It’s only going to grow.”

Andy Graham, assistant superintendent of Rantoul’s Recreation Department, said he expects more people to come out to the event this year as Hillsman ramps up advertising. He said he’s all for the effort.

“Anything that benefits the community, we want to be part of,” Graham said.

In addition to the dinner spearheaded by Hillsman, the department will hold a community senior dinner Dec. 15 and a breakfast with Santa on Dec. 17.

An ex-Marine, Hillsman said he is following his Father’s orders in holding events like this. He uses them as a bridge to reach people and to meet their needs.

“We’re going to take everything that Satan stole. We do that, I believe, by having compassion, feeding people. Jesus fed the multitudes first and then ministered to the people.”

One woman came with two of her grandchildren for the free victuals last year. Hillsman asked if there was anything they could pray with her about. She said they didn’t have any food in the house for the next day, Thanksgiving. So they gave her a whole turkey and everything that went with it.

“You’d be surprised how many people are like that that are in need,” Hillsman said. “Jesus said, ‘When you do it to the least of these you do it unto me.’

“We don’t want to leave nobody behind. That’s the Marine way.”

The Thanksgiving meal isn’t the first free-meal event with which Hillsman has been involved. He formerly had a barbecue business, Q’s Barbecue, and would take his trailer-mounted grill to Burnett’s Suits by Souljah business on West Bradley Avenue in Champaign and pass out free hamburgers and hot dogs.

“I just have a heart for the community,” he said. “My ministry is to reach out to young men, to glorify God, advance His kingdom and point people to Jesus.”

The 64-year-old Hillsman, who operates a ministry with his wife, Dee, out of their home, said they are advertising the free meal anywhere they can and hope more volunteers step forward for the event.

Volunteers can contact him by calling 217-552-6564 or emailing hillsmanquenton@yahoo.com.