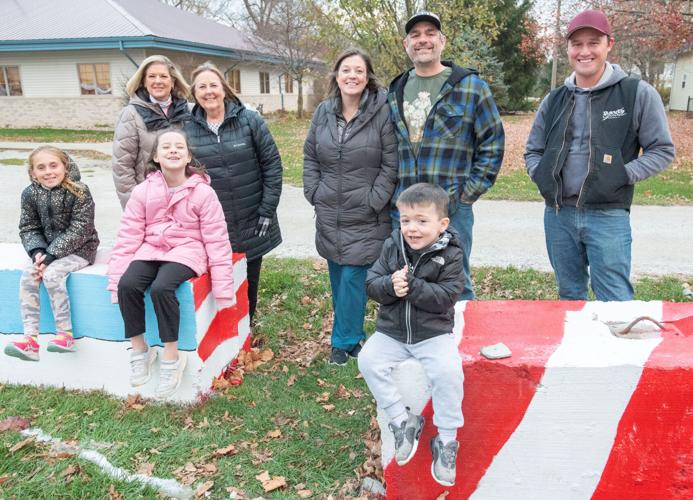 A few of the helpers who’ll make Philo’s Christmas tree lighting and parade on Sunday a reality pose around decorative concrete blocks that will keep the tree anchored — and protected from errant drivers. They are, back row from left, Lisa Quinn, Judy Kirby, Jenna Hoffman, Joey Hoffman and Jeff Deem, and, front row, Cambria Kirby, 8, Jaycee White, 8, and Chaske Hoffman, 3. 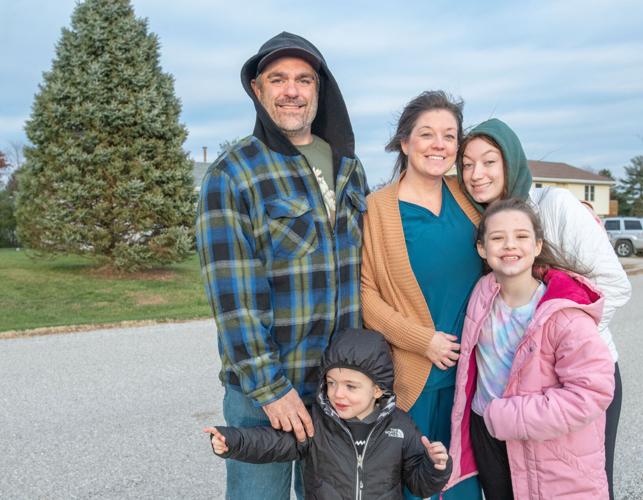 Clockwise from bottom -Chaske Hoffman, 3, Joey Hoffman, Jenna Hoffman, Madi Brocksmith and Jaycee White, 8, with the tree the family is donating to the city of Philo. At their Philo home on Thursday, Nov.17, 2022. 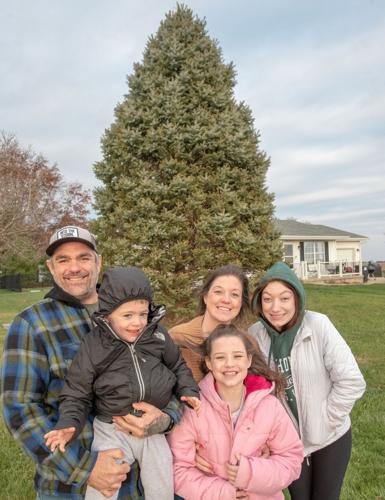 Clockwise from bottom, Chaske Hoffman, 3, Joey Hoffman, Jenna Hoffman, Madi Brocksmith and Jaycee White, 8, stand Thursday in front of the tree the family is donating to the city of Philo for use as a Christmas decoration.

A few of the helpers who’ll make Philo’s Christmas tree lighting and parade on Sunday a reality pose around decorative concrete blocks that will keep the tree anchored — and protected from errant drivers. They are, back row from left, Lisa Quinn, Judy Kirby, Jenna Hoffman, Joey Hoffman and Jeff Deem, and, front row, Cambria Kirby, 8, Jaycee White, 8, and Chaske Hoffman, 3.

Clockwise from bottom -Chaske Hoffman, 3, Joey Hoffman, Jenna Hoffman, Madi Brocksmith and Jaycee White, 8, with the tree the family is donating to the city of Philo. At their Philo home on Thursday, Nov.17, 2022.

Clockwise from bottom, Chaske Hoffman, 3, Joey Hoffman, Jenna Hoffman, Madi Brocksmith and Jaycee White, 8, stand Thursday in front of the tree the family is donating to the city of Philo for use as a Christmas decoration.

PHILO — The resurrection of a holiday tradition that fell by the wayside about 40 years ago in this small southern Champaign County community is creating lots of work for dozens of residents.

And they don’t mind a bit.

“I’m a devout Catholic and a firm believer in ‘love God, love your neighbor.’ With all the negativity in the world, it’s a pleasure to do something that will bring joy and is just nice for the community,” said Jeffrey Deem, who seems to be speaking for many of his approximately 1,400 fellow Philo residents.

The work that has them brimming with good will toward all is putting a glorious mature blue spruce Christmas tree in downtown Philo on Friday in advance of a holiday parade and tree-lighting on Sunday.

“I’m so excited about the tree coming back. This is going to be like a Hallmark movie,” said Julie Pioletti.

The notion of putting a Christmas tree in the middle of the town began in January, said resident David Happ.

“I was born and raised in Philo, and I remember in the early to mid-80s when I was a kid, there was a Christmas tree in the middle of downtown by the tavern. It went away. Maybe it was just a pain to worry about people driving into it. No one can remember exactly why,” he said.

So at the January meeting of the Philo Knights of Columbus, a Catholic men’s charitable organization, Happ said the idea was floated to put a tree there again. It was well-received.

“I’m on the village board, so when I went to the board and said we (the KC members) would take care of it. We are going to get the tree, do the lights and put it up. It won’t be any burden to the village. People are inevitably going to complain about having to drive around it, but it’s not going to bother me,” said Happ, who confidently took on the role of finding worker bees.

“That’s where it originated, but we are drawing help from all sorts of people,” he said, thanks to a post he put on a Philo Facebook page in July.

“I did it to gauge the level of enthusiasm, and people went nuts, so I said, ‘I guess we are going to do this,’” said Happ. “People are super anxious to help.”

“I’m super-energized and looking forward to it,” Happ said.

Happ said the KC members quickly learned that the tree would be their biggest project expense.

He started looking around town and spied one that would fit the bill.

Joey Hoffman, a floor installer, was doing work at Happ’s house in the summer when Happ asked him, half-joking, if he was ready to part with the blue spruce taking up a big chunk of his front yard on the south edge of town.

“Honestly, I was kind of tired of mowing around it on my riding mower,” said Hoffman, who has lived in the home with his wife and children for nine years.

Jenna Hoffman said the house was built in 1990, and they suspect the blue spruce was planted then.

“The width of it is pretty big,” said Jenna Hoffman, who was on board with donating the tree.

It helped that Happ sweetened the deal by saying the KC members would also grind out the stump and buy them a replacement tree.

“It’s kind of awesome, kind of cool to help,” said Joey Hoffman, who grew up in Mahomet.

His wife grew up in St. Joseph.

“This small-town living thing — they do things to come together,” said Jenna Hoffman, proud to be playing a part in the resurrected tradition.

Having the commitment of the tree made the project real, said Happ, who then started working on other needs. He knew just the man to build the stand to support Tannenbaum.

“I am a member of the KCs, and he (Happ) knows we have a welder and a plasma cutter to make this thing and the big junk pile,” said Tom Kleiss, a rural Tolono farmer who allegedly retired from farming six years ago but was busy laying anhydrous while answering questions.

Kleiss didn’t even consider saying no to Happ.

“He’s a very good organizer. His dad was the same way. He could get people to do stuff,” said Kleiss, who planned to draft his son to help.

Happ "gave me a paper with hen scratching on it, and he was pretty close to what I was thinking,” said Kleiss. “It depends on what material I can find in my junk yard.”

Kleiss plans to set the trunk inside a 12-inch pipe, then weld four legs to it at angles.

The stand legs will be anchored by 6-feet-long concrete barriers that will serve the dual purpose of keeping the tree from blowing over and discouraging any grinches who might be tempted to drive into it.

As for getting the tree down, that’s Nolan Herbert’s skill.

“I’m just a local guy with a chainsaw. Strong backs and weak minds,” he laughed.

Herbert, who lives south of Philo and farms with his dad, Todd Herbert, also didn’t dream of saying no when asked to help.

He’s the guy firing up the chainsaw around town after storms to clean up downed branches.

Like Kleiss, Herbert hasn’t given the task a lot of thought but isn’t worried about it.

“I drove by it. As far as I’m concerned, it’s going to happen. We’ll get it figured out,” he said, adding that Kleiss’ son Phillip is a good friend. “All three of us will get it done.”

Kleiss plans to use his telescopic handler with a hydraulic lifting mechanism to move the tree.

After Knights of Columbus members realized the tree project was a go, they decided that the proceeds of this year’s Casino Night, an evening of cards, gambling, food and fun hosted on election day, would be earmarked for decorations. They made about $1,500.

“I’ve already bought out every light at Farm and Fleet,” Happ said of the 4,000 multi-colored LED lights he scooped up.

Kleiss, who seems to have endless resources, will supply a man lift to help with the decorating while Deem plans to show up with a bucket truck.

An electrician for Davis Electric in Urbana, Deem said his boss was willing to let him use the truck to help reach the high branches.

Like Herbert, Deem is too young to remember when there was a Christmas tree downtown but is very excited about it. Deem was recently inducted into the group but was on board to help even before that because his neighbor, Eddie Cler, a fellow Knight, had merely asked.

He’s not daunted by the cold temperatures forecast for Friday.

Happ asked for volunteers to decorate the concrete barriers, which, like the tree stand, can be recycled for future holiday seasons.

“I had seen it on the Philo Watch page on Facebook, and there was one left and no one else was volunteering, and I said, ‘I’d like to do that,’” Weller said.

Interested in art since her sophomore year, Weller said she likes to do drawings both in art class and in her free time.

She’s actually decorating two of the barriers, one with a striped candy cane that will say Merry Christmas from Philo and the other with a Charlie Brown theme.

Pioletti, the woman with the Hallmark movie expectations, is the brains behind the parade.

“During COVID, we were sitting on the front porch watching people go by on golf carts and thought it would be fun to have a golf cart parade of lights. As time went on, we said, let’s do this, and it took off. This will be the third year,” she said.

She and fellow parade organizers are up to about two dozen entries, including golf carts, convertibles, the Grinch on an ATV, an antique truck and a float.

Margaret Khatchaturian will serve as the parade grand marshal.

“We chose her because she is a longtime resident who has done great things for the community,” said Pioletti.

The parade begins at 5 p.m. Sunday and will start on Jackson, go south to Van Buren, then east to the Lutheran Church, south to McKinley then east past Hazen Park, where parking is available. The parade continues east to Garfield, where it turns north and goes past St. Thomas church and school, more parking opportunities, then up to Washington, where the procession turns west. The parade will then make its way around the tree at the intersection of Washington and Harrison and through the business district.

Santa Claus himself will light the tree.

After all that excitement, parade-goers are encouraged to head to the Philo Tavern or Daly’s Sports Bar, both Washington Street businesses that are staying open to keep that holiday spirit stoked.

“Believe it or not, the streets of Philo will be lined with people,” Pioletti said.

The Christmas tree in downtown Philo is living up to the hype about it.