Micheal Chatman, 21, of Montgomery testifies in his own defense Wednesday at the Champaign County Courthouse in Urbana during his trial on charges of first-degree murder in the March 23, 2018, fatal shooting of Ricky Green, 18, of Urbana. 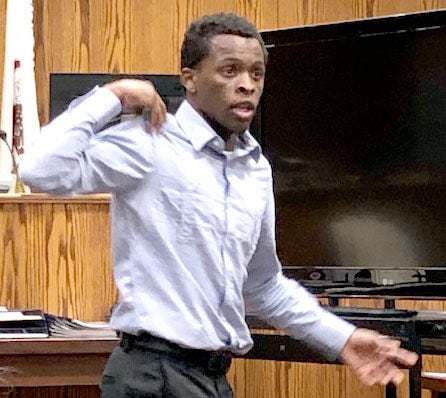 Micheal Chatman, 21, of Montgomery demonstrates to jurors in his murder trial Wednesday how he tried to scare off Ricky Green, 18, of Urbana, who had grabbed his right shoulder in a March 2018 incident that led to Mr. Green’s fatal shooting.

Micheal Chatman, 21, of Montgomery testifies in his own defense Wednesday at the Champaign County Courthouse in Urbana during his trial on charges of first-degree murder in the March 23, 2018, fatal shooting of Ricky Green, 18, of Urbana.

Micheal Chatman, 21, of Montgomery demonstrates to jurors in his murder trial Wednesday how he tried to scare off Ricky Green, 18, of Urbana, who had grabbed his right shoulder in a March 2018 incident that led to Mr. Green’s fatal shooting.

URBANA — For almost two hours on the witness stand Wednesday, Micheal Chatman maintained that he had no intention of robbing Ricky Green of a gun and certainly no plan to kill him in March 2018.

Instead, the 21-year-old Montgomery man said he consistently lied to Champaign police about not knowing how Mr. Green was shot because he distrusted the police. That went on for 10 months before he and Michael Simmons, now 23, were both charged with first-degree murder.

“I was scared. I didn’t want to tell a man who locks people up forever” what really happened, said Chatman, who for the first time in the three-and-a-half years since Mr. Green’s death claimed that he acted in self-defense when he fired in Mr. Green’s direction.

“When the gun went off, I was afraid,” he said. “I was trying to shoot to scare off a person who was attacking me.”

Chatman, who repeatedly told relatives in recorded jail calls that he was going to beat the murder charges, had quick answers to all of the questions posed by his court-appointed attorney, Kevin Nolan of Champaign, and caustic remarks about evidence the jury wasn’t hearing during an hourlong cross-examination by Assistant State’s Attorney Kristin Alferink.

His testimony spilled out so quickly that the court reporter begged him repeatedly to slow his delivery so she could accurately record his testimony. Her pleas went unheeded.

“Me, Simmons and Ricky Green had a plan to take guns from Ricky Green’s friends. He hit us up and asked us to get drunk,” said Chatman, adding that another man in the car with them had to buy their alcohol because he and Mr. Green were only 18.

Police had obtained texts, both deleted and still on the phones of Chatman and Simmons, along with messages they sent to each other on social media, that suggested the two of them planned to rob Mr. Green of his gun.

Chatman said on March 22, they went to a party for a couple of hours in Champaign but left when there was an altercation.

They dropped off the man who had acted as their designated driver and alcohol buyer, then went to Carle Foundation Hospital to pick up Simmons’ girlfriend, Kotia Fairman.

While on that errand, Chatman said, his mother, Demetria Chatman, texted Simmons asking him to relay to her son that she needed him to come to the Shadowwood Mobile Home Park right away because she had gotten into a dispute with a man there.

Chatman said he was not receiving text messages while in the car.

Going through several text messages exchanged between himself and Simmons, Chatman denied that they inferred a plan to rob Mr. Green. Instead, he claimed Mr. Green wanted to break into a home and steal guns.

He said when their group arrived at Shadowwood to assist his mom, there were several police officers present, leading him to believe something bad had happened to his mother.

Having liquor, cannabis and two guns in the car, they instructed Fairman, who was driving, to pull over so they could avoid being stopped.

When a police car pulled in behind them, they tucked the guns under the seat and told her to drive off. But when the officers did not immediately pursue them, they bailed out of the car and ran, leaving Fairman and the car on Apricot Drive alone.

Chatman said as they jumped from the car, he grabbed the gun that Mr. Green had put by Chatman’s feet on the rear floorboard.

“I was just going to run with the gun and get away from police. I stop running. I’m out of breath. Ricky is coming up behind me. He got aggressive,” Chatman said of Mr. Green’s demands that Chatman return his gun.

“I’m drunk. He’s drunk. He’s being very aggressive … and I got scared,” said Chatman, noting Mr. Green was about 5 inches taller than him and outweighed him by about 50 pounds. “I think he’s going to grab the gun and shoot me based on how things were going at that time.

“I cocked the gun back to try to scare him. I pull the slide back and one (bullet) pops out. He started attacking me more, grabbing me even rougher.”

Demonstrating in front of the jurors, Chatman said Mr. Green grabbed his right shoulder from behind.

“I fire the gun with my right hand and point it around my left. He’s still grabbing me. My boot came off. I fired again. I had to shoot again because he’s still on me,” Chatman said of Mr. Green, who was found by police with two gunshot wounds on Juniper Drive in the mobile home park.

Chatman said he kept running, losing one boot as he ran, and hid under a car because there were police all around. That’s where his second boot was found.

Later, the shoeless Chatman said he went to the home of a friend on Bradley Avenue in Champaign to use her phone since he had left his in the car.

“I told her I got shot up by some Mexicans,” he said.

It was three days later, he said, that at the urging of his mother, he talked to detectives and began his monthslong insistence that he had no idea what had happened to Mr. Green when they all ran from the car.

“I’m scared. I didn’t consult with an attorney. I didn’t rob nobody,” he said.

Regarding the information that jailhouse informant Dennis Griham gave police months later about previously undisclosed details of the shooting that Chatman had shared with him, Chatman said Griham “twisted it and made up his own little story.”

Chatman admitted that he told other jail inmates about Griham asking him questions, which resulted in Griham’s removal from that cell block.

Chatman denied ever talking to a second man who Detective Jeremiah Christian testified had also given police information months after the killing that they had not previously heard but which fit the evidence they were collecting. Jurors saw a video of that man’s statement to detectives.

Earlier Wednesday, jurors also heard about 15 recorded calls that Chatman made from the jail to family and friends, some of which could be interpreted as incriminating.

Christian said he listened to “several hundred calls” that Chatman made.

“He’s second to none. He leads by a landslide. I’ve never heard anybody make so many calls,” Christian said.

The case is set to go to the jury today.