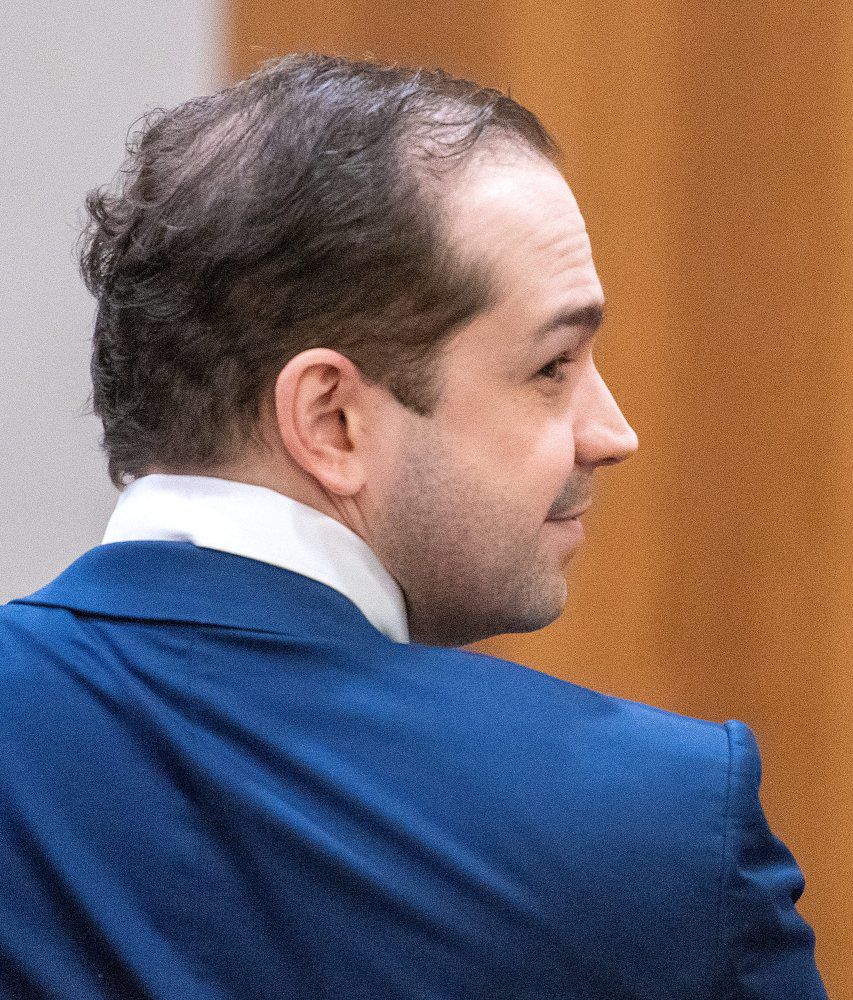 Michael Henslick, 31, of Mahomet, turns to the gallery and smiles before the afternoon session begins on the first day of his murder trial in the 2009 fatal stabbing of Holly Cassano on Tuesday, Feb. 11, 2020, at the Champaign County Courthouse in Urbana. 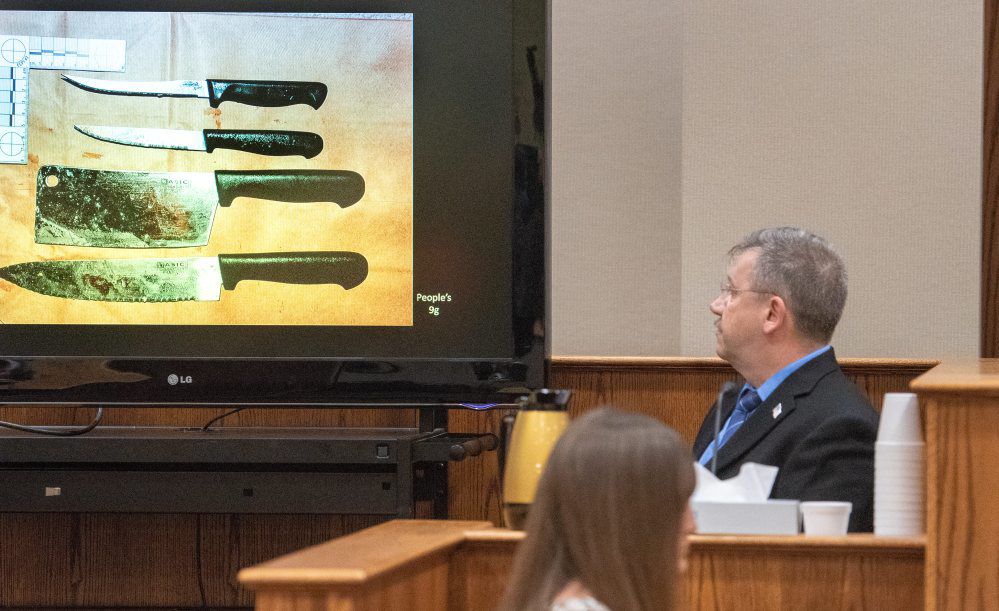 Retired Illinois State Police crime-scene investigator Mike Kyrouac talks about knives found at the scene of the Nov. 2, 2009, fatal stabbing of Holly Cassano, 22, of Mahomet on the first day of the trial of Michael Henslick, 31, who is charged with her murder, on Tuesday, Feb. 11, 2020, in Urbana. 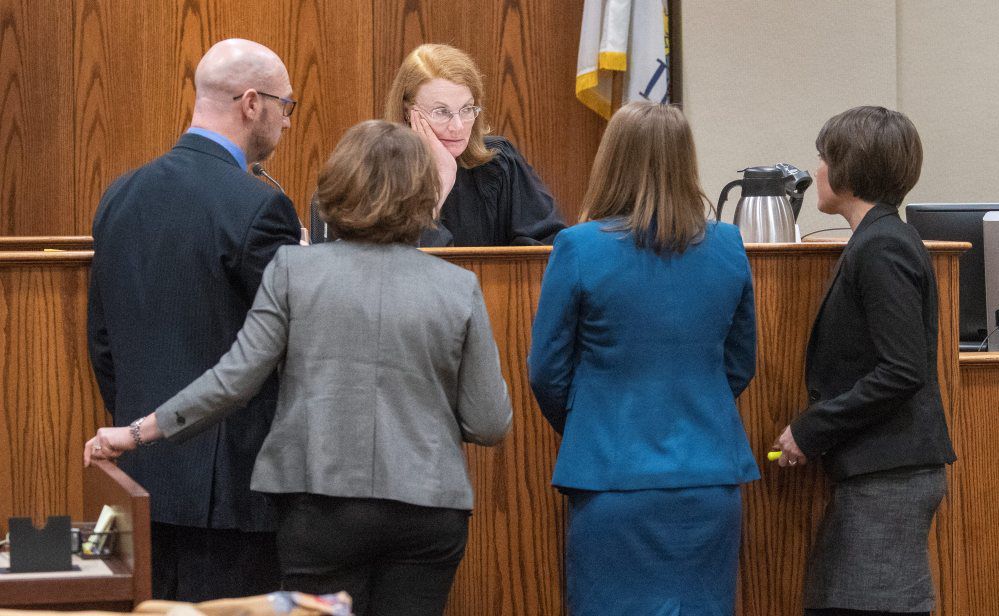 Michael Henslick, 31, of Mahomet, turns to the gallery and smiles before the afternoon session begins on the first day of his murder trial in the 2009 fatal stabbing of Holly Cassano on Tuesday, Feb. 11, 2020, at the Champaign County Courthouse in Urbana.

Retired Illinois State Police crime-scene investigator Mike Kyrouac talks about knives found at the scene of the Nov. 2, 2009, fatal stabbing of Holly Cassano, 22, of Mahomet on the first day of the trial of Michael Henslick, 31, who is charged with her murder, on Tuesday, Feb. 11, 2020, in Urbana.

URBANA — Toni Cassano sat alone on the steps of her daughter’s Mahomet home for several minutes on Nov. 2, 2009, waiting for help just moments after finding her only daughter fatally stabbed.

Holly Cassano, 22, was supposed to have been at her mother’s home two streets away about 90 minutes earlier at 9 a.m. but didn’t show up. When Toni Cassano couldn’t reach her by phone, she drove to her daughter’s home and found the front door unlatched.

Just inside the front door she saw “red splotches all over the floor.”

“I thought it was fake blood from a Halloween party and she hadn’t cleaned it up,” Cassano said. “I walked through the house and went into her bedroom, still calling to her. I found her lying on the floor on her back, face up. I saw her naked with blood all over her and stab wounds. She had some clothing on but it had been moved around. I sat down beside her and put my hand on her leg.”

“I said a prayer to God, then called 911. I stayed inside just a few more minutes, then forced myself to go outside because I did not want to contaminate anything,” Cassano said.

Jurors and observers sniffled and wept quietly during the powerful testimony of the grieving mother Tuesday morning near the opening of the murder trial of Michael Henslick, 31, of Mahomet.

She was the fourth of 19 witnesses prosecutors may call to build their case that Henslick fatally stabbed his former neighbor and classmate in an “exceptionally brutal and heinous manner indicative of wanton cruelty.”

If the eight women and four men judging Henslick decide that the state proved beyond a reasonable doubt that he killed her and did so in that manner, Henslick faces natural life behind bars.

In opening statements, Rietz said Miss Cassano suffered from upwards of 60 stab wounds, some of them defensive. Trails of blood throughout her home suggested that the killer had also been injured.

Rietz said the DNA from that blood was ultimately linked to Henslick.

“You will hear him in his own words initially deny, then ultimately admit” that he killed her, she said.

Rietz said Henslick knew Miss Cassano and went to her house to visit late on the night of Nov. 1 or early in the morning of Nov. 2.

“She was kind to him. They talked. He fell asleep,” she said. “At some point, he got a knife from the kitchen and with rage and jealousy, stabbed her repeatedly and sexually assaulted her on the floor.”

Prior to the dramatic testimony of Toni Cassano, the state had called Miss Cassano’s cousin, Amber Nakashian, close in age and in life to Holly.

Nakashian said she knew Henslick from having attended high school with him in Mahomet, as had Miss Cassano.

“We were friends and had a flirtation but nothing ever manifested from that,” she said.

After leaving the area in 2007, she and Henslick occasionally texted each other and spent time together when she returned to Mahomet to visit.

Nakashian said her boyfriend was driving her to Mahomet after the murder when she received a text from Henslick.

“He apologized and said he was sorry and he had heard about what happened to Holly and that there was a lot of commotion on our street,” she said. “He said she had been beaten or shot. I told him she had been stabbed to death and that I didn’t have any extra information.”

Nakashian said she didn’t tell sheriff’s investigators about the text in 2009 because “it didn’t seem relevant.” Following Henslick’s arrest in 2018, she shared the information with deputies.

One of those friends, Blake Stahler Sears, said he did not know Henslick through Miss Cassano, but knew of him after her death from places she worked.

“I started working at TGI Friday’s in 2012. He would be at the same places I worked,” she said.

Veteran Champaign County sheriff’s deputy Douglas Bialeschki was the first law-enforcement officer to arrive at Miss Cassano’s DuPage Street home in the Candlewood Estates Mobile Home Park in response to a 911 call from a distraught woman saying her daughter was dead and covered in blood.

He found Toni Cassano “upset and hysterical” outside. She motioned him to the back of the mobile home.

Spotting drops of blood just inside the door, and knowing the victim was at the other end of the home, Bialeschki said that “led me to believe there was more of a situation here than I originally expected.”

The 25-year deputy said he tiptoed through the home, careful not to disturb the many areas where he could see blood prior to arriving at Miss Cassano’s bedroom. He did not go in.

“I knew it was a crime scene. I knew I couldn’t be any help to the victim,” he said.

Jurors and observers had a clear view of the graphic pictures of Miss Cassano’s body, splayed out on her floor next to her bed. There was blood on her, the floor and the bed. Just inches from her right foot was a plastic tricycle used by her then 18-month-old daughter, who had a smaller bed in the same room. She was not in the home that night.

Bialeschki said he called his supervisor and paramedics, letting in only two of the many first responders who arrived so they could confirm she was deceased.

He then protected the scene as he waited for detectives and a crime-scene investigator who would launch what would end up being nine years of work to find Miss Cassano’s alleged killer.

Illinois State Police crime-scene investigator Sgt. Mike Kyrouac, retired since 2011, described the layout of the home and almost 50 items of evidence he collected, about half of which he estimated were blood samples.

Under questioning by Assistant State’s Attorney Troy Lozar, Kyrouac said he started about noon the day Miss Cassano was found and didn’t finish until late the next night, employing the help of a blood-spatter analyst from the state police.

Besides blood on her bed and near her body, Kyrouac found blood in the bathroom off her bedroom, in the hallway leading to her room, on the kitchen floor, in the kitchen sink, near the front door, on a front storm door, on the vanity and floor of the bathroom at the other end of the house, and on the door and wall of the second bedroom.

There were utility scissors in the sink in that second bathroom and the blood-spattered packaging for fishnet stockings. Kyrouac collected the packaging but said he never found the stockings.

In opening statements, Rietz said Henslick told investigators that he “wandered through the house” looking for something to use to wrap up his cut arm, then left the house, throwing the knife he used to stab Miss Cassano into a field.

“This defendant knew things only the person who committed this offense would know,” Rietz said.

Kyrouac said he found four knives and blood in the kitchen sink.

He could tell at the crime scene that Miss Cassano’s body had “numerous defects,” which Lozar eventually got Kyrouac to clarify were stab wounds.

He could also see that her thong underwear was pulled down around one thigh and ripped and that her camisole was pushed up around her neck, exposing most of her body.

When the camisole was removed at autopsy, Kyrouac said there were holes in the front and back, but “somewhere in the area of 12 to 13” in the back.

She had also been sexually assaulted.

Kyrouac collected a blanket from the bloodied bed that had “several slit puncture” marks and Miss Cassano’s purse, which was open with cash still in it on the smaller bed in her bedroom.

He also took a light-switch plate from the bathroom nearest her body that had bloodstains.

Other testimony later in the day Tuesday came from paramedic Andrew Burns, who confirmed that Miss Cassano was deceased; from former sheriff’s investigator Travis Burr, who took the evidence that Kyrouac collected back to the sheriff’s office, noting it took three cars to get it all there; and Champaign County Coroner Duane Northrup, who said he moved Miss Cassano’s body to the morgue in McLean County for autopsy.

The trial continues today with the forensic pathologist who did Miss Cassano’s testimony and a parade of sheriff’s deputies involved in the years-long investigation and arrest of Henslick.

Day 2 of testimony at the trial of Michael Henslick

Cassano murder trial, Day 2 | Experts lay out how attack might have played out

Among them: The pathologist at the McLean County morgue, who gave a grim description of what Holly Cassano went through in the last minutes of her life during the second full day of testimony.