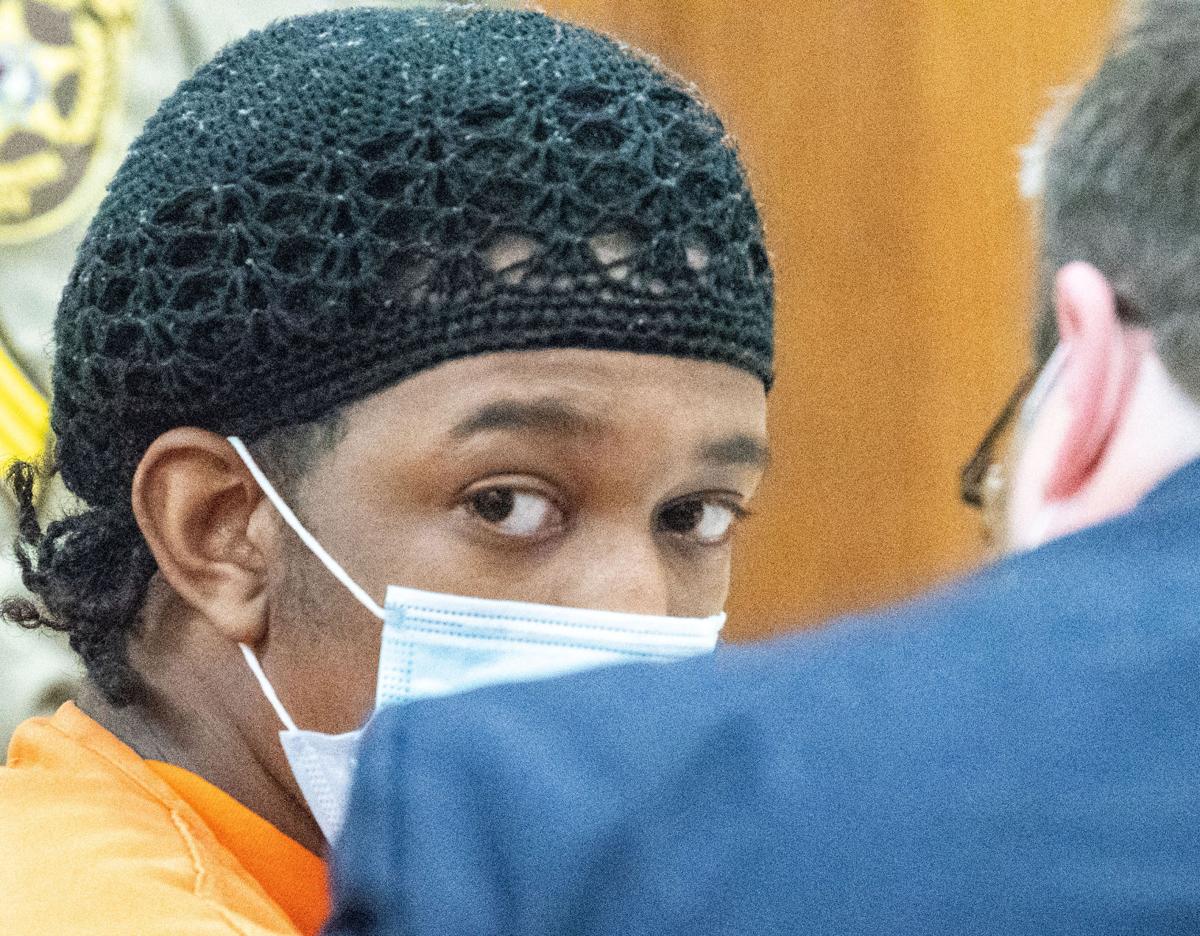 Dakir Pickens looks back at two victims who were crying in a courtroom at the Champaign County Courthouse in Urbana after Pickens was sentenced Wednesday to 19 years in prison for his part in a 2019 attempted robbery of Regions Bank. 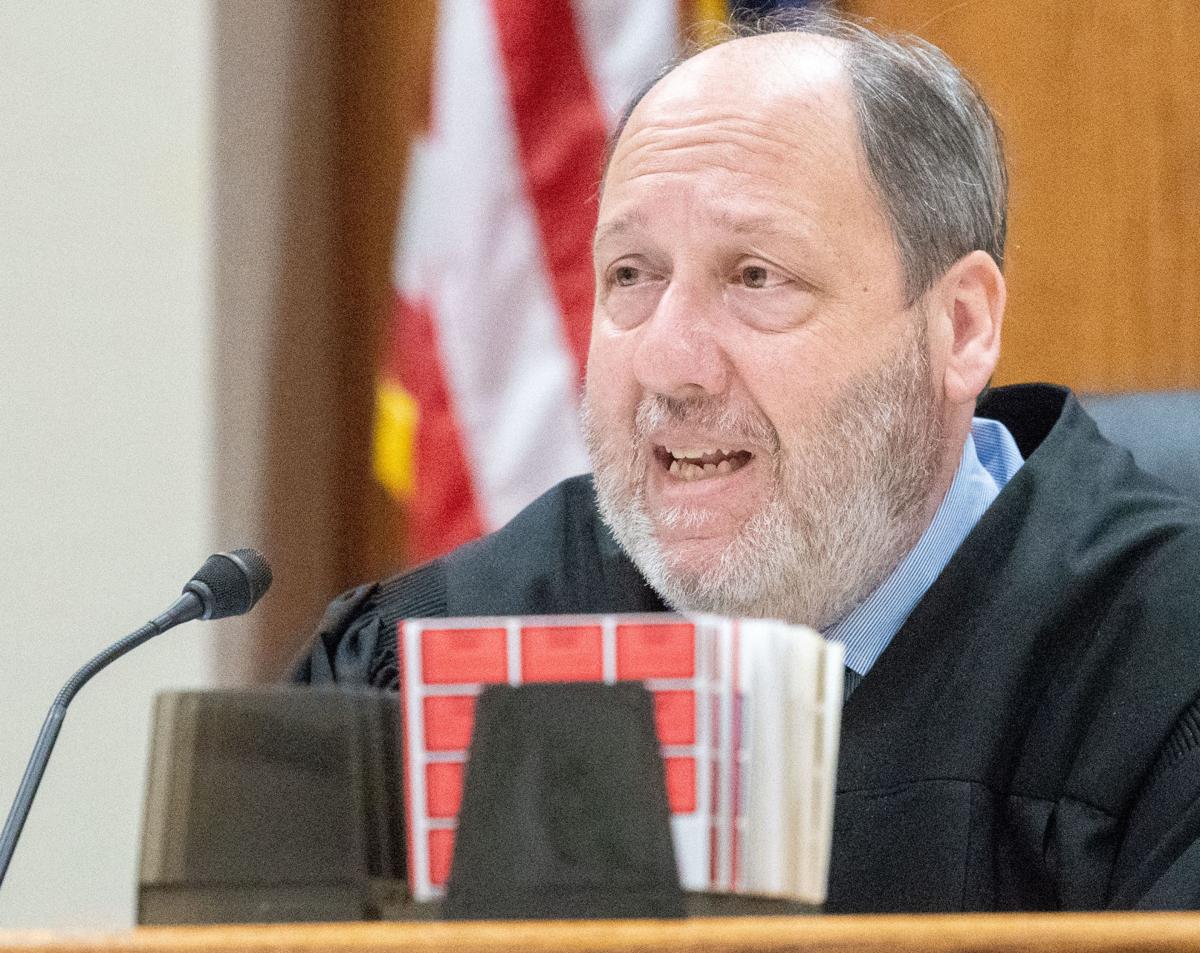 Judge Randy Rosenbaum speaks about his ruling in the sentencing of Dakar Pickens to 19 years in prison for his part in a attempted robbery of Regions Bank. At the Champaign County Courthouse in Urbana on Wednesday, Nov. 18, 2020. 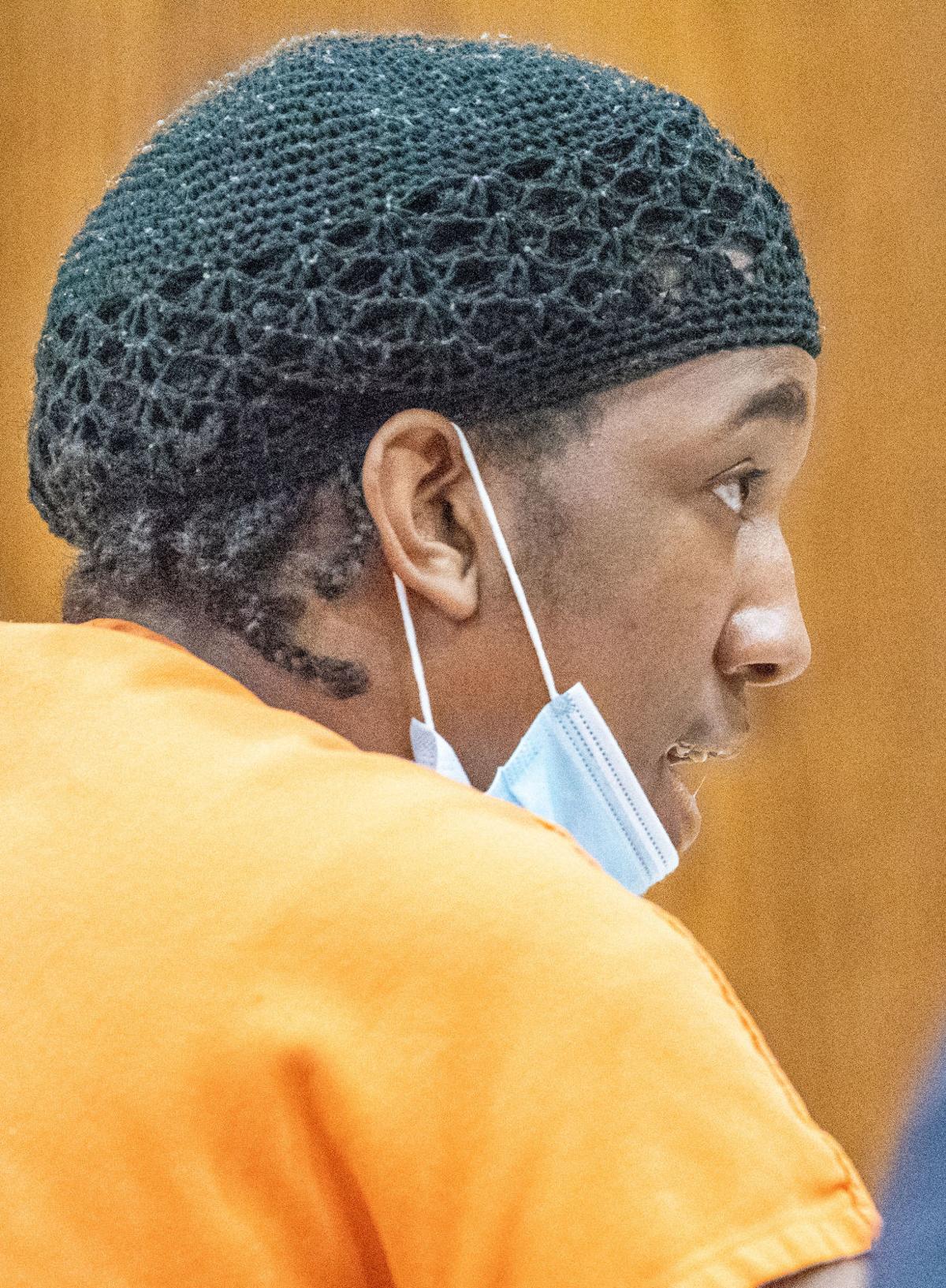 Dakar Pickens makes his plea to the judge before being sentenced to 19 years in prison for his part in a attempted robbery of Regions Bank. At the Champaign County Courthouse in Urbana on Wednesday, Nov. 18, 2020. 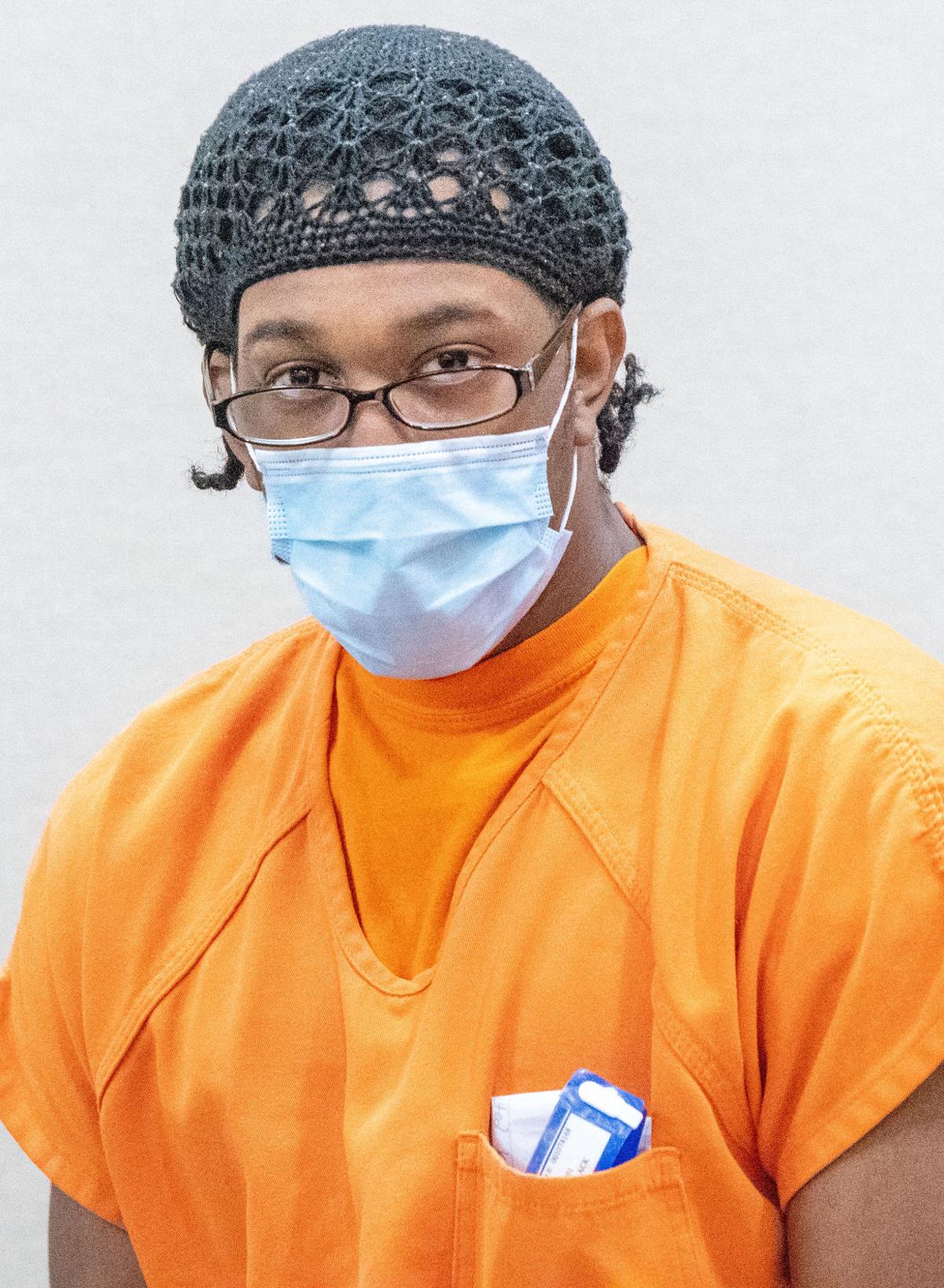 Dakar Pickens enters the courtroom before being sentenced to 19 years in prison for his part in a attempted robbery of Regions Bank. At the Champaign County Courthouse in Urbana on Wednesday, Nov. 18, 2020.

Dakir Pickens looks back at two victims who were crying in a courtroom at the Champaign County Courthouse in Urbana after Pickens was sentenced Wednesday to 19 years in prison for his part in a 2019 attempted robbery of Regions Bank.

Judge Randy Rosenbaum speaks about his ruling in the sentencing of Dakar Pickens to 19 years in prison for his part in a attempted robbery of Regions Bank. At the Champaign County Courthouse in Urbana on Wednesday, Nov. 18, 2020.

Dakar Pickens makes his plea to the judge before being sentenced to 19 years in prison for his part in a attempted robbery of Regions Bank. At the Champaign County Courthouse in Urbana on Wednesday, Nov. 18, 2020.

Dakar Pickens enters the courtroom before being sentenced to 19 years in prison for his part in a attempted robbery of Regions Bank. At the Champaign County Courthouse in Urbana on Wednesday, Nov. 18, 2020.

URBANA — A Champaign 19-year-old who called his own behavior during a bank robbery a year ago “barbaric, drastic and outlandish” was sentenced Wednesday to 19 years in prison.

“I regret this is part of my legacy. I never grew up saying I would be a criminal. If I could take everyone’s pain and make it mine, I would,” Dakir Pickens said moments before being handed a sentence that means he must serve at least 16 years behind bars.

Two women who were in Regions Bank when Pickens brutally pistol- whipped one of them and fired six shots in an attempt to get cash wept in the back of the courtroom as Judge Randy Rosenbaum determined the young man’s future.

Pickens pleaded guilty in late September to armed violence, admitting that on Oct. 15, 2019, he used a handgun to try to take money from an employee of the bank at 111 S. State St., C. In return, Assistant State’s Attorney Troy Lozar dismissed other charges of armed violence, financial-institution robbery and aggravated battery with a gun.

Lozar then argued that Pickens should be sentenced to 23 years in prison, offering him a discount of seven years on the maximum sentence for Pickens’ cooperation with police and prosecutors.

The conviction was the first for the teen, who said he was homeless, addicted to drugs and under the influence when he went in the bank late that morning, accompanied by his younger brother. Dasheem Pickens, 17, has been deemed unfit to stand trial.

On Tuesday, Rosenbaum heard evidence from Champaign police Detective Jody Cherry about the logistics of the attempted holdup, from a doctor treating one of the victims, two bank employees and two former alternative school teachers of Pickens. Given the late hour that that concluded, Rosenbaum decided to hear from the lawyers and Pickens Wednesday, then sentenced the teen who had no criminal record.

“He came out of the gates screaming with one of the worst offenses possible. He comes into a bank to take money and he hurt somebody,” the judge said.

Cherry testified that just prior to the 11:30 a.m. report of the holdup, there was a call to 911 that shots had been fired on the west side of town more than 2 miles away.

Cherry later learned that the call had been made on Dakir Pickens’ phone by a third young man who was never charged with a crime as a ruse to divert police resources from the bank.

Using surveillance video, Cherry explained to the judge how Dakir Pickens took the lead and fired a shot into the ceiling. He then grabbed a female employee by the hair, threw her to the floor and hit her in the head with a pistol as he demanded to be let into the secure teller area.

The branch manager had run out a back door with Dasheem Pickens chasing him, Cherry said. When the manager got away, Dasheem came back inside and watched as Dakir fired shots into a door and at bulletproof glass around the teller area. Dakir also kicked at the protective barrier in an unsuccessful attempt to get in. Cherry said six shots in all were fired. None of the four employees was hit by gunfire.

The brothers ran from the bank without cash, changed clothes in a nearby alley, ditched the gun in a pile of clothing and split up. Each was caught not long after and the clothing and gun collected as evidence.

The assistant branch manager who had been pistol-whipped told the judge that Pickens hit her repeatedly and that she was too stunned to react to his demands as she bled from her head wound.

A 10-year employee of various banks, the 31-year-old woman said she had been the victim of 12 previous robberies and never once before had she been physically attacked. The other robbers, she said, either made their demands quietly or with a note. “I would give them the cash and press a button.”

Although Lozar sought less than the maximum sentence for Pickens, he had to persuade the judge with evidence that the woman had suffered “great bodily harm” so that Pickens has to serve 85 percent of his sentence.

The woman’s workers’ compensation doctor, Dr. James DeSalvio, testified at length about the treatment she continues to receive for the aftermath of a concussion and trauma. She still has debilitating headaches, nausea, ringing in her ear, neck and back pain, loss of balance and severe anxiety.

“This has profoundly affected her life, her day-to-day existence,” DeSalvio said.

Defense attorney Matt Ham asked DeSalvio about the length and depth of the wound to her head, but the doctor said the 2-centimeter cut was the “most menial part” of her injury compared to the pain she has suffered since.

Rosenbaum said he was convinced by what he heard that the woman had indeed suffered great bodily harm, which has to be determined on a case-by-case basis.

Lozar called what Pickens did to the woman “an unnecessary level of violence.”

“He doesn’t enter as a timid 18-year-old. He enters as a threatening adult male with a firearm, and grabs (the victim). You can see her smiling going into the break room. She has no idea her life is about to be completely and maybe permanently changed,” Lozar said.

The crime left that woman out of work and her co-worker who remains on the job fearful, he said.

Ham argued for a 15-year sentence, noting that Pickens was barely over 18 when the crime was committed and that his brain has not fully developed.

He urged the judge not to find that the woman’s injury amounted to great bodily harm.

“She has one 2-centimeter cut to her head, not multiple lacerations from multiple hits,” Ham argued.

He reminded the judge of testimony from two employees of the READY school, who knew Pickens from the 2016-17 school year.

The school social worker called Pickens polite, interested in art and history and able to do his work when he showed up. However, he was absent 40 percent of the year, tardy another 20 percent, present only 40 percent, then dropped out at the end of ninth grade. Another teacher called him “kind, gentle and helpful to other students.”

Ham also asked the judge to consider that Pickens was homeless and had substance-abuse issues.

When it was his turn to speak, Pickens told the judge that his father is a crack addict, his mother an alcoholic, his brother is schizophrenic, his grandmother was murdered by an uncle and his entire immediate family lives in poverty.

He had no family members present for his sentencing.

“I don’t know how to fill out a job application. I know how much a gram of cocaine costs,” he said. “The state said I’m responsible for a cold, calculated crime. I’m 19. I made a mistake.”

“My day-to-day life has changed,” she said. “I’m constantly on edge, nervous. I lash out at my husband. I constantly feel guilty because I feel like I should have been in the place of” the co-worker who was pistol-whipped.