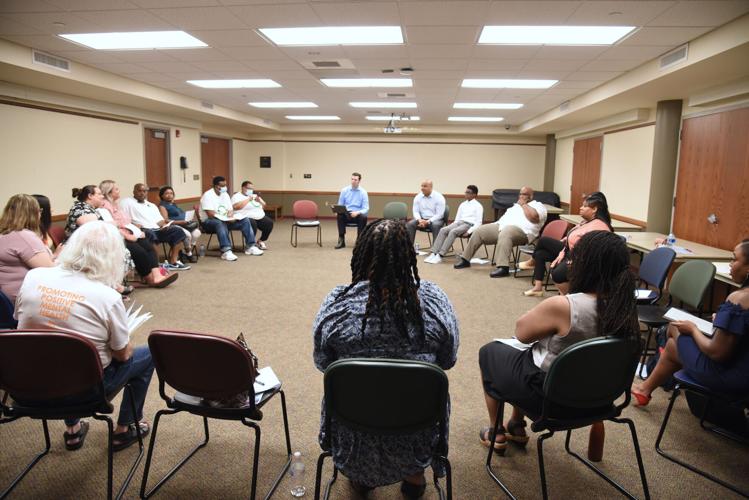 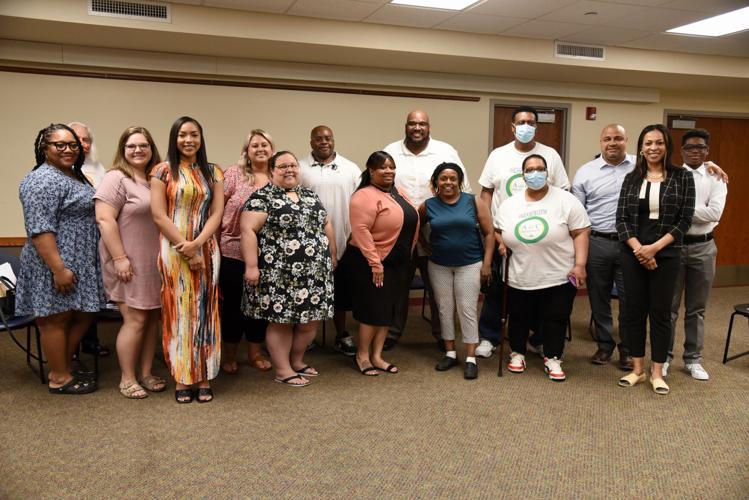 URBANA — The leader of Illinois’ new gun-violence prevention office hadn’t ever been to Champaign-Urbana before Wednesday.

But after moderating a two-hour discussion featuring local city staff, youth-development professionals and leaders of community organizations, Chris Patterson, assistant secretary of the Illinois Department of Human Services, has a far clearer picture.

“I knew Champaign and Urbana were proud cities, but to see it is another thing,” Patterson said. “To know that the community members and providers from the area absolutely own the idea of finding out what’s going to make this a safer place.”

Patterson leads the newly created Office of Firearm Violence Prevention in Illinois, responsible for carrying out the Reimagine Public Safety Act, which commits $250 million over three years to fund “evidence-based solutions” to rising gun violence in the state.

C-U, Danville and Decatur are among more than 40 “designated service areas” in the act, marked for their higher-than-average incidences of gun violence.

Starting this month, community-based organizations in these service areas can apply for $113 million in state grants to bolster their youth-development or violence-prevention services. The average 12-month grant, the state agency says, is $300,000.

“What we would like to see is those organizations contributing to violence reduction getting the capacity and funding to do their job adequately,” Patterson said.

Each location of designated service has to confer a Local Advisory Council made up of elected and non-elected officials, resident representatives and a member of a youth-development or gun-violence prevention organization.

The advisory councils will make advisory recommendations to the state on where to direct the violence-prevention funds in the fall, though community organizations don’t have to go through them to apply for a grant. Organizations can apply online at dhs.illinois.gov/rpsa.

This was Patterson and the state agency’s second stop in the state, after visiting East St. Louis. They’ll be spreading the word about the Reimagine Public Safety Act funds for the rest of the month, he said.

“This office is intended to listen to community members,” Patterson said. “We don’t want to have the trickle-down effect that hasn’t been working for communities for so long. We want to be engaged and be in real partnership.”

Details on the 25 reports filed with Champaign PD in the second part of 2021, including one man filing three reports involving nine guns 15 months apart, an 11-gun heist that led one man to point police to his 'old drinking buddy' and more firearms reported stolen from center consoles and glove compartments.

Details on the 28 guns reported stolen to CPD in the first part of 2021, including a Glock that went missing during the ransacking of an auto dealership, and the four firearms found by citizens — in a ditch near Curtis and Staley, the basement of a University Ave. home, a hotel heating unit and a hotel room.

Two months before they go head to head in the GOP primary, U.S. Reps. Rodney Davis and Mary Miller answer our questions about gun ownership, whether new laws are needed, whether we can arrest our way out of the problem and more.

“We are in agreement with other downtown business owners on the need for an increase in police presence, especially on weekends," a "very frustrated" KoFusion owner Janet Bubin says after sharing security video that shows a man (upper right) firing a gun into the sky three times early Saturday from a Main Street sidewalk.

“We can’t be hashtagging ‘Free Him' when our cousin is the alleged shooter, and yelling ‘If you see something, say something' when our brother gets shot," says Rantoul dad Kevin Williams. Also joining the conversation: Dennis Roberts, Pete Schnabel, Julia Rietz, Emma Dorantes, Tom Garza and Monica Cherry.

In a survey of Illinois' 100 most populous cities and villages, we found that 56 (including Champaign and Danville) have automated license-plate readers, 36 do not (including Urbana) and eight are seriously considering adding them.

In Part 14 of our continuing series, Editor Jeff D'Alessio asked the seven Republican candidates for governor six questions, including: What’s a bold step you’d take that you believe would set the state on the right path in curbing gun violence?

“I could not believe what I was hearing coming from the mouth of elected city council member (Alicia) Beck (last) Tuesday night," says NAACP Champaign County Branch President Minnie Pearson, who considered the comments "rude and dismissive to the Morrs." The topic is sure to come up again at tonight's council meeting.

"From the time my child texted me until I got the ‘all clear’ was about 16 minutes. It was the longest 16 minutes of my life," says Heidi Slough, whose daughter was working at Market Place Mall Saturday. Read what others experienced Saturday, plus recommendations for where Champaign and Urbana should direct COVID relief funds.

LeConte Nix: “We have to normalize that going to therapy is great and is needed — just like going to a movie or your regular doctor’s appointment. We all have stuff that we hide mentally or avoid. Now, think about a young adult who only knows how to deal with anger by violence of some sort, because he or she has never been taught how to handle certain situations."

Tracy Parsons on why some local youths obtain guns: “They don’t believe we as a society — families, police, schools — can keep them safe, so they believe they need a gun. ... We were told a couple years ago: ‘Mr. Parsons, I’d rather be caught with it than caught without it.’"

Where are all of the guns coming from? Why can't we arrest our way out of this problem? Those are among the questions asked and answered by our panel in Part 2 of The News-Gazette's continuing conversation on gun violence.