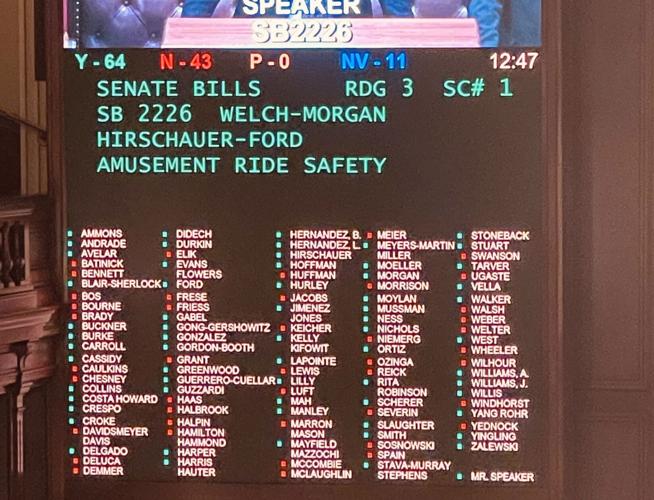 The board showing the House's passage of a sweeping gun reform package on Thursday. 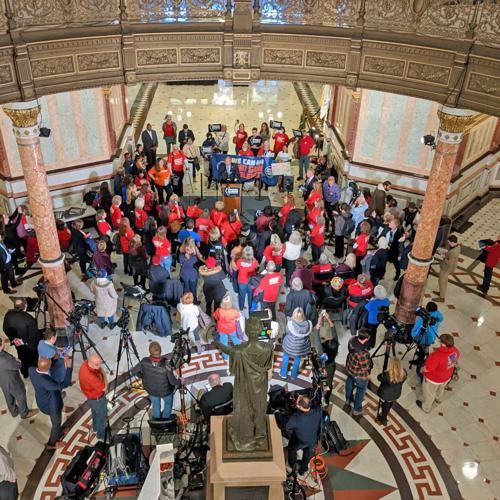 Illinois mothers turned out en masse for a rally in Springfield to show their support of a gun reform bill that passed the House.

SPRINGFIELD — A bill that would ban the sale and manufacture of assault weapons in Illinois advanced out of the state House and now awaits action in the Senate.

The bill was prompted in large part by the July 4 mass shooting in Highland Park during an Independence Day parade which left seven people dead and dozens more injured or traumatized.

Among those who traveled directly from Highland Park was Ashbey Beasley, who told a House committee Thursday that her 6-year-old son was traumatized by witnessing the parade shooting and is now undergoing therapy.

The bill was the subject of extensive committee hearings in December and negotiations over details of the measure continued until right before its passage in the House. It will still need approval in the Senate and from Gov. J.B. Pritzker to become law.

While changes to the legislation are possible, under the version passed by the House it would become illegal for anyone other than certain law enforcement officers, members of the U.S. military or the Illinois National Guard to knowingly manufacture, deliver, sell or purchase an assault weapon, assault weapon attachment, .50 caliber rifle or .50 caliber cartridge beginning 300 days after Pritzker’s signature on the measure.

However, firearms used for hunting that are explicitly allowed by the Illinois Department of Natural Resources would not fall under the ban.

The bill provides a long list of specific weapons that would qualify as assault weapons, based largely on the federal assault weapons ban that was in effect from 1994 until 2014.

“These are weapons that belong on a battlefield, not at parades, or parks, or schools or churches,” House Speaker Emanuel “Chris” Welch, a chief sponsor of the bill, told his colleagues during a hearing Thursday.

People who already own a weapon that would be banned under the bill would be allowed to keep them, but they would be required to file an affidavit with the Illinois State Police within 180 days after the bill becomes law, providing the weapon’s serial number in order to receive a special endorsement on their Firearm Owner’s Identification card.

Also beginning 300 days after becoming law, it would be illegal for anyone who owns such a weapon to sell or transfer it to anyone other than an heir, an out-of-state resident or a federally licensed firearms dealer. They would also be required to notify state police within 10 days of that sale or gift.

One of the last-minute changes made to the bill was a provision that would allow Illinois gun manufacturers to continue producing the weapons but would limit their sales to only law enforcement or out-of-state purchasers in jurisdictions where the weapons are still permitted.

The final version of the measure was stripped of provisions that would have prohibited individuals between ages 18 and 21 from purchasing a firearm, even with a parent’s consent.

The latest version also removed a provision requiring hunters younger than 21 to be under the supervision of someone over 21 with a valid FOID card. That means if the bill becomes law, those individuals will have the same rights and protections they have under current law.

“We talked a lot about that within our caucus, with negotiations,” said Rep. Bob Morgan, D-Deerfield, the bill’s chief sponsor in the House. “We heard a lot of feedback about the under-21 (issue). And what we heard most commonly was a lot of concerns with regards to hunting. That was a really important element.”

We did it, Illinois! We passed legislation that makes our communities safer and expanded reproductive healthcare protections. Congratulations to our Firearms Safety Working Group and the Reproductive Health Working Group for months of hard work to #UpliftIL. pic.twitter.com/ftsbKZhRoR

Even those changes, however, were not enough to satisfy ardent gun rights advocates who argued that the measure would still violate the Second Amendment’s guarantee of the right to keep and bear arms.

“Part of me wants you to pass this bill,” Illinois State Rifle Association lobbyist Ed Sullivan told the committee. “From what I read, it’s less constitutional than it was before. Takes away more rights than it did before. Makes it easier to strike down.”

Sullivan argued that many of the weapons listed in the bill as assault weapons are commonly used by hunters and sportsmen, a fact that he said would make the ban vulnerable to being overturned under recent U.S. Supreme Court standards.

Still, the bill passed out of the committee on a 9-4 vote, sending it to the House floor for a debate that lasted nearly two hours, with supporters arguing it would reduce gun-related deaths in Illinois and opponents arguing it would have little or no effect and would likely be ruled unconstitutional.

The final vote in the House, taken shortly after midnight Friday morning, was 64-43. Only one Republican, outgoing Minority Leader Jim Durkin, of Western Springs, voted in favor of the bill. Four Democrats voted no and four more were listed as absent or not voting.

In an unusual move, Pritzker sat in the House chamber throughout the debate, at a House member’s desk next to Welch. After the vote, he issued a statement saying he looked forward to working with the Senate to pass the bill.

The language of the bill was inserted as an amendment to a bill, Senate Bill 2226, that had already passed the Senate, one dealing with amusement ride safety. That means the Senate only needs to vote on whether to concur with the changes made by the House.

Capitol News Illinois is a nonprofit, nonpartisan news service covering state government. It is distributed to more than 400 newspapers statewide, as well as hundreds of radio and TV stations. It is funded primarily by the Illinois Press Foundation and the Robert R. McCormick Foundation.

An Urbana man tells police he “didn’t think it was strange at the time” when a white female in her 30s, who’d been smoking crack at his home with three other strangers, went wandering around the residence. But when he wakes up the next day to find his Smith & Wesson 9 mm missing, he grows suspicious.

"While my neighborhood 50 years ago had an abundance of guns, violent gang activity, poverty and what I would call a higher level of racism than today," Sam Banks writes in a guest column in today's eight-page special section, "the level of violence was nowhere near what we experience today in Champaign and particularly Chicago."

"I am a changed person. Although I no longer live in fear of violence, as I did for a period after each of these incidents, I am more aware of my surroundings than I had ever needed to be before any of these shootings," Robert DeAtley writes.